Top Things to do in Djerba Island

Top 10 Things to do in Djerba Island, Tunisia

A large island, approximately 20 by 20 kilometers, Djerba lies just off the northeastern coast of Africa, in southeastern Tunisia, near the Libyan border. Set on the Gulf of Gabes, the island is known for an eclectic population of residents and tourists, splendid beaches and picturesque villages that feature distinctive, square, whitewashed houses. Houmt Souq is the one large town, with bustling markets and lively outdoor cafes. Djerba, which offers a pirate's castle and fortress-like mosques, is believed to have been the inspiration for Homer's Odyssey. Accessible from the south of Tunisia, a road originally built by the Romans connects the island to the mainland.
Restaurants in Djerba Island 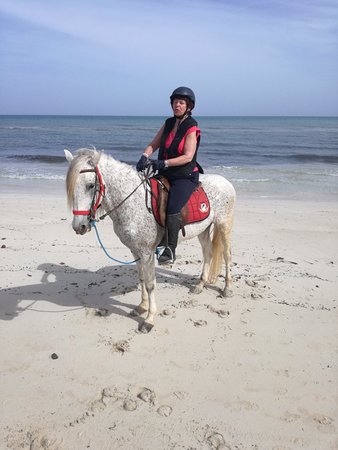 An amazing place where you absolutely have to go during your vacations in Djerba. You'll discover the island through a lot of faboulous rambles with our horses, ponies and camels. What ever you want we have necessarily activities made for you and we can promise you a lot of incredible memories.

I just can't find the right words to give you the real images of the day that we enjoyed with all the ranch's team ! I strongly recommand this experience even if you're a beginner in horse riding (Just like me !), the instructors will be there to help you and make the experience safe and enjoyable. And it's not expensive at all.
The very friendly staff will take care of you from the beginning of the day till the end, you'll experience the ride through Djerba's most beautifull spots and taste a delicious barbecue on the beach with fresh drinks!!!
So if you're in Djerba or you're planning to go there, do not hesitate and try it! 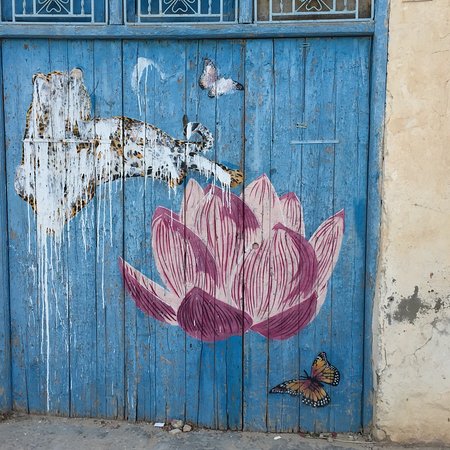 A real open-air museum, Djerbahood is the place invested by artists from all around the world. The town of Erriadh in Djerba will be hosting this summer the works of hundred of artists from thirty different nationalities.

We visited Djerbahood on the first day of our time in Djerba. As you wander around the streets you'll be delighted by all of the surprising different murals and the different styles that they embody. There's something special around every corner! 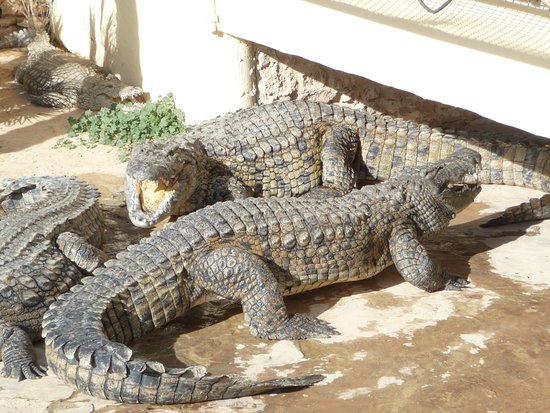 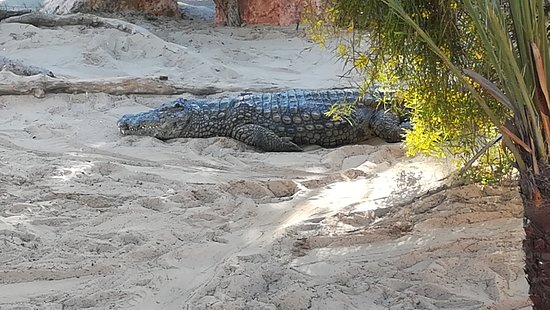 I visited this place many times but still each time I go to Djerba I love to go there. Better to visit this place in the afternoon time since there is more activities but morning time there is nothing interesting especially in summer time when it's really hot. 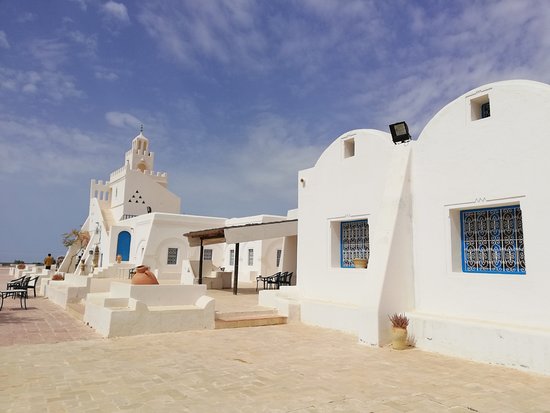 Built in 2001, this art museum boasts a fine collection of pottery and a round observation tower, excellent for viewing the sunset.

Interesting to visit and have a glimpse of history of Djerba Island. A lot of facts and figures inside, kids can have a free ride on a Camel too (short but nice). Located in beautiful light, modern building, the Lalla Hadria Museum is not to be missed. For me, it is not only the cultural highlight of Djerba, but also one of the best museums in Tunisia. Lovely collection of carpets, jewelry, furniture, clothing and other artefacts that will give you strong appreciation for their beauty and craftsmanship.
The museum is located in a complex of buildings featuring other traditional activities and arts, but the Lalla Hadria is definitely the highlight. That said, we also had a pleasant time exploring what the surrounding activities had to offer. 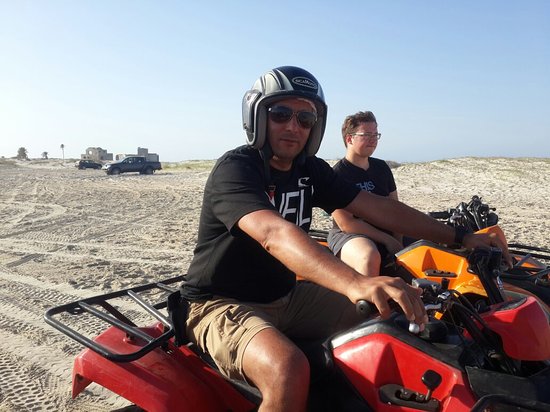 It was just the 2 of us for our tour the guide was great, very limited English, but tried really hard regardless! Took us on a great journey which felt like we'd covered the whe island! We had a photo experience in which the pictures were delivered to our Hotel the next day and our guide also used my phone to take an amazing video of us driving down the beach!! Couldn't rate this trip highly enough!!! :-) 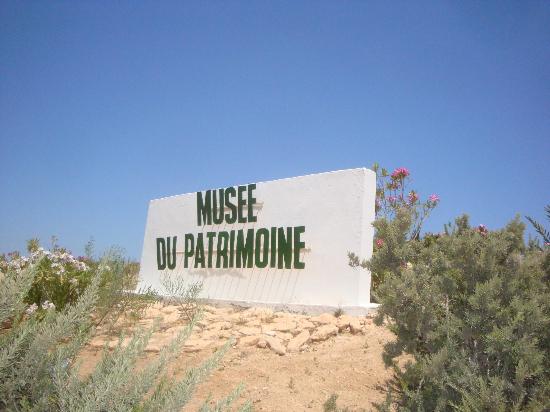 This museum is in a lovely old building that seems to go on forever. Very clean and well organized with diorama like depictions of various traditions and cultural events related to the people of Djerba Island. The only downside was the camel used to demonstrate preparation of cereal grains. He was not happy at all. But at least they no longer have a real camel in the olive oil press room (I've been told it stunk!) - now it's a replica. Great view from the entrance over the sea. 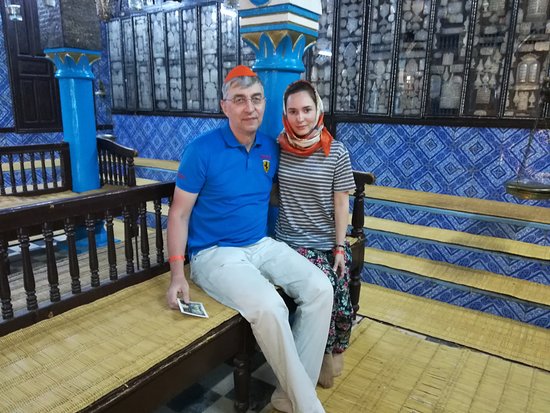 The most ancient Jewish community in Tunisia supposedly dates back to 586 BCE.

Synagogue La Ghriba, built in the 19th century, has extremely strict security clearance for visitors but it was a worthwhile visit. The Synagogue is steeped in Jewish traditions and is indeed a piece of amazing Moorish architecture. Its interior is richly decorated. It has beautiful ornate coffered ceilings, arches, artefacts, etc. Timing your visit is most important as it is closed during lunch. 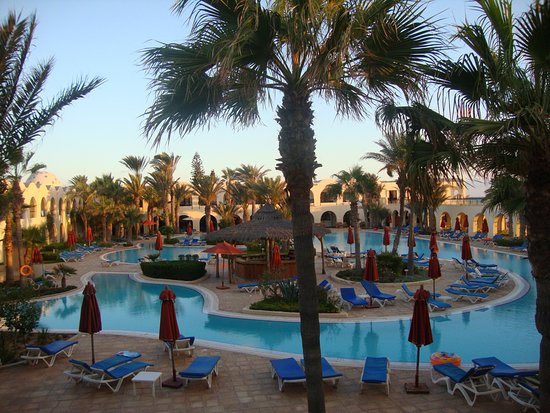 We arrived In Djerba after a 3 hour delay at Gatwick. We should have been flying with Thomas Cook but ended up being flown in by Triton Airways who were a very accommodating crew However no duty free or snacks available on aircraft.
Sentido Djerba beach turned out to be a good Hotel choice my research had paid off.
Beautiful private sandy beach, with warm blue shallow waters on one side and an enormous oasis lagoon type swimming pool on the other side We tended to sunbathe on the glass sided bridge which offered views of both pool and sea and was a little quieter and more spacious.
Unfortunatly there was still the usual towels on the sunbeds at dawn senario, but being in the minority it was a case of if you cant beat "em" join "em" !
Reception staff spoke English but most of the other staff spoke mainly Arabic, French or German, but with the use of a universal smile and an attempt at some Arabic and school French we managed to get the service that we were hoping for.
There are no hot drink making facilities in the rooms so if you like an early morning cuppa take your own travel kettle. We were very lucky to have a wonderful rep named Andrea who leant us a spare kettle for the week.( now hubby was happy).
Sadly there is not much to see in Djerba we booked a day trip and was bused round the whole island in 3/4 of a day, visiting the Museum, local carpet and pottery centre's Houmt Souk (the capital )followed by lunch on a pirate ship! again English was the fourth lanuage and much was lost in translation.
We met a great couple from Liverpool ( Everton/ Chelsea) and spent a great week of laughter and fun with them, that certainly made our holiday.
Overall a great relaxing place to Chill. We had all inclusive option and found the food to be of fairly good quality and plenty of choice at all three meal sittings with the usual pool side snacks inbetween.
We would certainly go back again.
Top tip: Pool towels supplied are small and don't cover the full length of the sun beds which can get very hot in the sun If you have room in your case taken an extra one for comfort