Top 10 Things to do in Derry, United Kingdom (UK)

Derry (/ˈdɛri/), officially Londonderry (/ˈlʌndənˌdɛri/), is the second-largest city in Northern Ireland and the fourth-largest city on the island of Ireland. The name Derry is an anglicisation of the Old Irish name Daire (modern Irish: Doire) meaning "oak grove". In 1613, the city was granted a Royal Charter by King James I and gained the "London" prefix to reflect the funding of its construction by the London guilds. While the city is more usually known colloquially as Derry, Londonderry is also commonly used and remains the legal name.
Restaurants in Derry 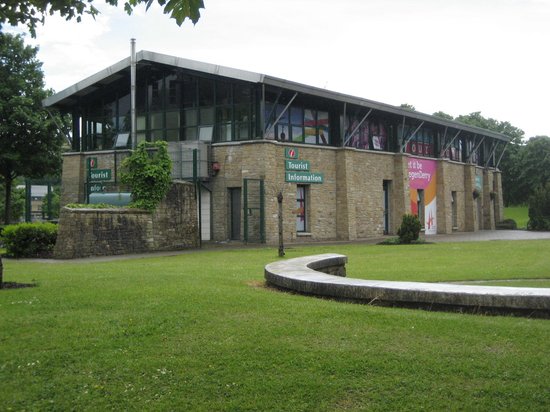 I stopped by here to buy a postcard and ended up spending a good 1/2 hour with Barry and Elene, the exceptionally friendly and informative 'Visit Derry' representatives. They shared much information on what to see in/around Derry and also spoke candidly about growing up in Derry and the changes they have seen over the past decade or so since the end of 'The Troubles.' A very educational and intimate look into a city with a turbulent history. They are both quite proud of their city, hopeful and optimistic in the direction Derry is heading both now and into the future. They both made me feel like an honored guest in their city. I recommend making this your first stop when visiting Derry. 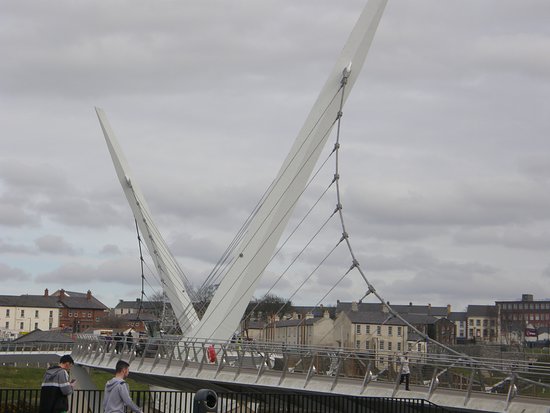 Beautiful views of the city. Interesting history. Definitely worth a visit. Not wheelchair suitable because of steps. Interesting facts listed around the cityscapes. 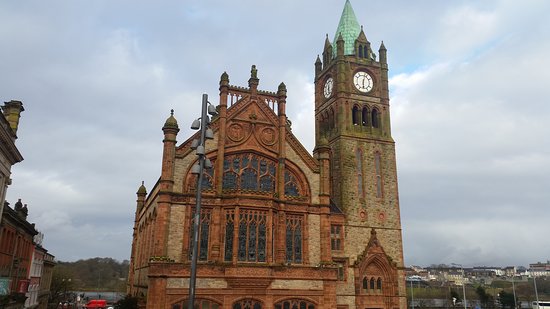 The historic Guildhall is one of Derry's most recognisable landmarks, located in the heart of the city since 1890. The Guildhall is a must see visitor attraction with over 20 magnificent stained glass windows representing the history of the city and the Plantation of Ulster exhibition . The newly refurbished and award winning Guildhall provides a unique and state of the art venue for events. The main hall has a capacity of up to 600 standing or 400 seated and provides a stunning backdrop for corporate hire, conferences, events and civil ceremonies. The Whittaker Suite can accommodate up to 60 and is the perfect space for business meetings, functions and civil ceremonies. All spaces are equipped with state of the art technology for sound, audio and lighting.

Took a stroll inside / free! Good historical information but unfortunately some of the interactive stations weren’t working. Worth visiting anyway 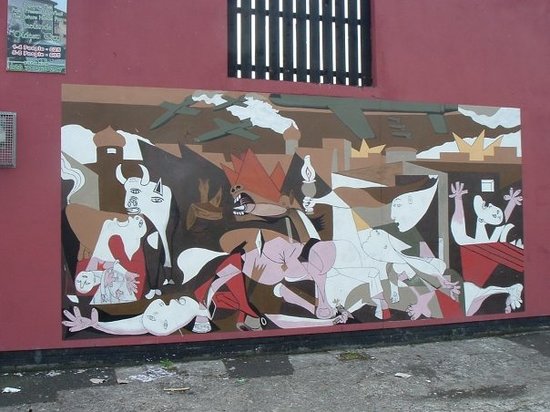 The Museum of Free Derry recently re-opened its doors in the Bogside following a £2.4m redevelopment and offers a full multi-media exhibition on the civil rights and early conflict era in the city, including Battle of the Bogside, Internment, Bloody Sunday and Operation Motorman. The museum was established by the Bloody Sunday Trust in 2006 to tell the story of the civil rights movement and the creation of Free Derry in the 1960s and 1970s, and it has become an important part of Ireland’s radical and civil rights heritage. It tells the story of how a largely working class community rose up against the years of oppression it had endured. The struggle of Free Derry is part of a wider struggle in Ireland and internationally for freedom and equality for all.

We combined a visit to this museum with the Bogside History tour and the two combined really well.
The museum is just the right size and combines a nice variety of displays to tell the story. Video, audio, written text and very powerful artefacts leave a powerful impression.
Friendly staff are also on hand and we would definitely recommend you include a stop here when you visit Derry 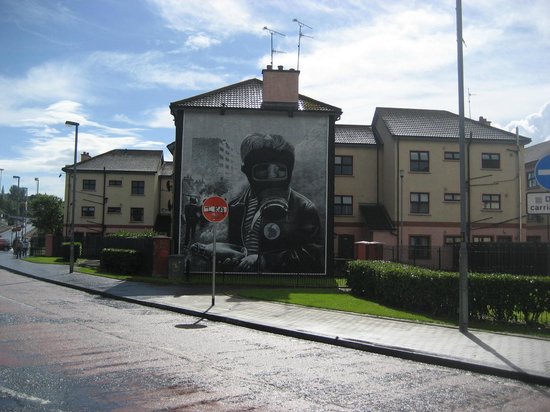 You can tour the famous murals of the Bogside in the company of the three artists who painted them. Known world wide as "The Bogside Artists", we created all twelve murals of The People's Gallery of the Bogside Derry. We give tours of our work and explain to you in a way nobody else can their creation and the history they depict. You could be on one of our tours by simply booking via our website or giving us a call.

These murals are a fitting way to remember those who have lost their lives in the civil rights struggle and a way to educate the public while showing respect for those who continue to live under oppression - both in Derry and elsewhere in the world. I would recommend taking a map that shows the mural locations and combine this with a visit to the nearby Museum of Free Derry. Be respectful as this is a neighborhood and people live here. 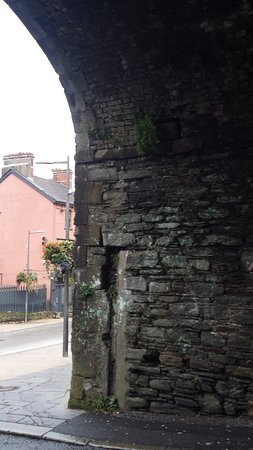 We stopped at Londonderry to visit the city walls rather spontaneously. We were driving from Belfast to Sligo and decided that morning to stop and visit the walls because the weather had cleared up. It was a lovely idea! We parked close to St Columb Cathedral and walked the walls, circling back to our car. We walked a little bit in the center of the walled city but the buildings are more modern, and we didn’t have enough time to explore both. The walls are very easy to walk (staircases allow you to get on and off at different areas) and on a beautiful day, it was well worth it. The views are fantastic and with a good guide book, we did fine. I wish we had had the time to take a guided tour like some of the other reviewers did. I took a lot of photos!

Okay there's not much to see about the bridge, but it is a nice walk on a sunny day. We crossed over to see the old army barracks on the opposite shore and then walked back. There are seats half way if you just want to sit and view the river or if you need a rest. The walk is flat but you do then have to climb up a bit to see the barracks, so if you are not good with hills just stay on the bridge. 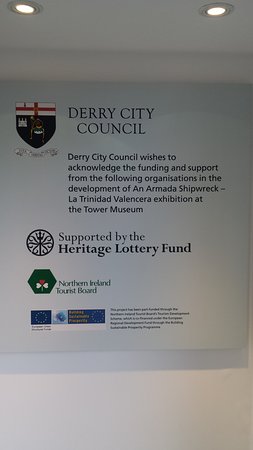 A museum explaining the political conflict that has shaped the city and the country: a must for those unfamiliar with Northern Ireland's war-torn past.

This is one of the best museums I have visited in a long time. Set out over several floors and just packed with history and information from the very beginning of human occupation- charts the history of Derry in a very well presented informative way. Lots of displays and short films to watch- thought provoking in every way. Chilling to realise what life was like through the troubles and touching to read Bobby Sands Poem preserved there as it was written. This place is very educational and a place to visit after you have walked round the Derry walls. The staff are incredibly helpful and informative. We spent over 2 hours here as there is so much to see and hear. 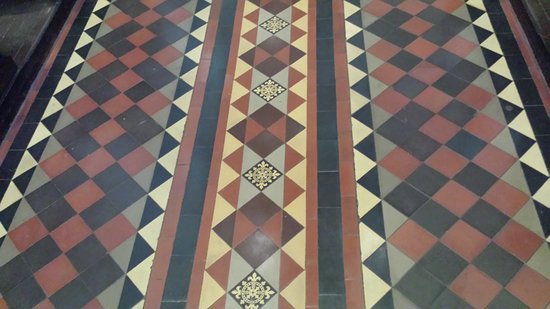 Majestic, neo-Gothic Church of Ireland (Anglican) Cathedral, built between 1628 and 1633. St. Columb's is the oldest and most historic building within the walled City of Londonderry. It has recently been extensively restored. The Chapter House Museum displays artefacts from the Siege of Londonderry in 1689 and also many other interesting items.There is an audio visual display which tells the visitor the history of the Cathedral and there are guide leaflets available in 8 Languages. Admission is free - donations are welcome.

Dating back to the early 1600's, this Cathedral evokes a time long, long ago. Its thick stone walls and austere interior blend perfectly. It occupies a prime location along the city walls. The burial ground is quite substantial for a city Cathedral. Its main spire can be seen from virtually anywhere within the walled city and when viewing Derry from across the river, St .Columb's spire makes up a prominent part of the 'city skyline.' 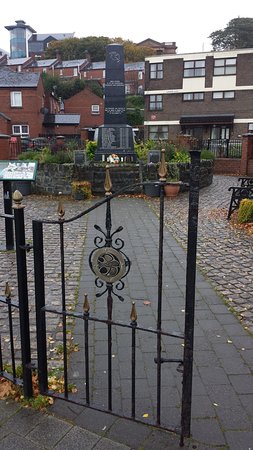 This is so much more than a wall painted with a slogan. To fully appreciate the memorial, I suggest visiting the Museum of Free Derry first. Throughout the year, the facade changes slightly, but the message remains the same.