Bristol is a suburban city located in Hartford County, Connecticut, United States, 20 miles (32 km) southwest of Hartford. As of the 2010 census, the population of the city was 60,477. Bristol is best known as the home of ESPN, whose central studios are in the city. Bristol is also home to Lake Compounce, America's oldest continuously operating theme park. Bristol was known as a clock-making city in the 19th century, and is home to the American Clock & Watch Museum. Bristol's nicknames include the "Bell City", because of a history manufacturing innovative spring-driven doorbells, and the "Mum City", because it was once a leader in chrysanthemum production and still holds an annual Bristol Mum Festival. In 2010, Bristol was ranked 84th on Money Magazine's "Best Places to Live". In 2013, Hartford Magazine ranked Bristol as Greater Hartford's top municipality in the "Best Bang for the Buck" category.
Restaurants in Bristol 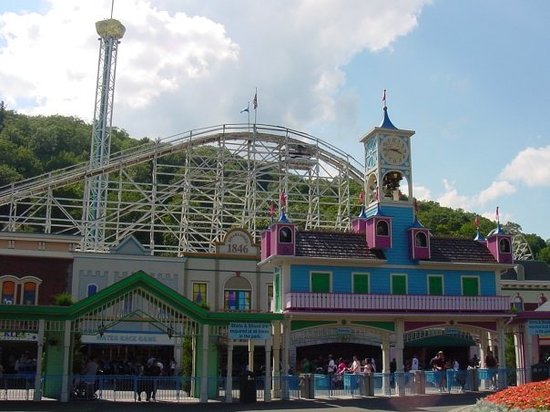 With over 402 acres of fun, Lake Compounce is the oldest continuously operating amusement park in North America, welcoming families since 1846. Lake Compounce has ten cozy catering pavilions and plenty of room to host your next birthday, party, family reunion, and corporate event! Lake Compounce combines unique and exciting thrill rides and coasters for all ages with a full-sized water park—all for one low price. As the park continues to delight families from all around the New England area and beyond, the balance of evolution and tradition continues to play an important role at the nation’s first amusement park.

The family and I visited the Lake Compounce lights display on Thanksgiving weekend to begin the holiday season. It was surprisingly crowded on that first night, considering it was quite cold. The giant lighted Christmas tree by the entrance was a wonderful sight to see. The train ride around the park with Christmas music was fun with the many lighted figures and signs along the way. We even dared to go on a few of the smaller rides that were open, if we bundled up. We found the building where Santa was posing for pictures with help from the elves. The hot chocolate was popular that night. The synchronized light and music presentation that occurred every so often at certain areas of the park was really entertaining. We even picked up a few holiday item souvenirs at one of the gift shops. It was a great way to get into the holiday spirit and we enjoyed it. 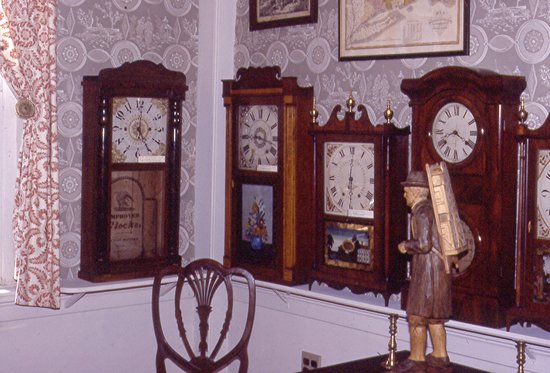 Join us for a fascinating trip back in time. Learn about American clock & watch making with particular emphasis on Connecticut, once the clock capital of the country. Over 1500 timekeepers are on display and many chime & strike on the hour. The museum boasts one of the largest displays of American-made timepieces in the world. Designated as one of Connecticut's cultural treasures, the museum has been a destination in Connecticut for over 60 years. The museum is housed in an 1801 home with an authentic American sundial garden. The museum gift shop has a wide variety of clock-related gifts and books. The museum is open seven days a week, 10:00a.m. To 5:00p.m. Museum members admitted FREE, Adults $6, Seniors $5, Children 8-17 $3, Children under 8 admitted FREE. Group tour rates available for 10 or more visitors. Call for details.

You will not be disappointed to visit and learn the history of "time" while in Bristol. Locals can get passes from Library. Check it out on a rainy day! Call ahead for hours.. 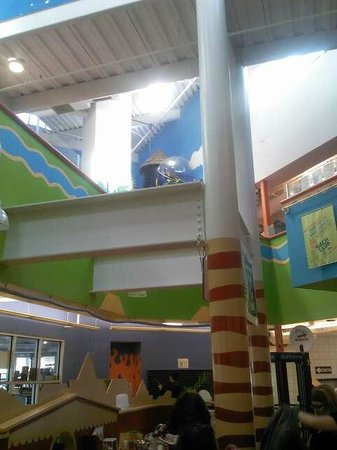 The six year old of my family has been going to Imagine Nation since she was two, exploring all the things they have. My personal favorites are the reptile room where we got to pet snakes and lizards and the giant bubble maker that made...MoreThank you Felicia! It's great to hear that your family is growing up with Imagine Nation! I really appreciate your review and will share your feedback with our management team. We hope to see you again soon! 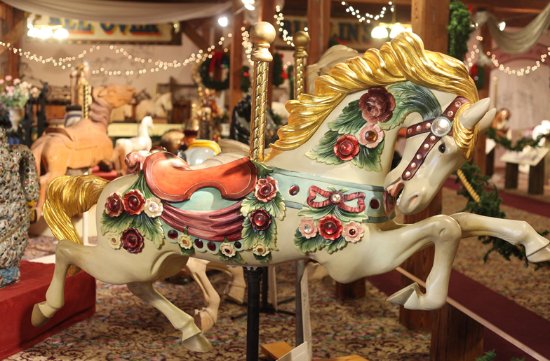 This 33,000 sq. ft. restored hosiery factory is the home of the New England Carousel Museum nestled in the heart of downtown Bristol, Connecticut, half way between NY City and Boston. This magnificent, unique Museum is worth the visit. In addition to antique, wooden carousel pieces the Museum has a new working carousel, a carousel restoration workshop,a Museum of Fire History, a Museum of Greek Culture, the Glo Sessions Fine Art Gallery, a changing art gallery, a children's craft center and a gift shop. The Museum is a great place to host a wedding, bar mitzvahs, receptions, performances, dances, meetings and much more with many options that accommodate everything from a bridal shower for 30 people to a sit down dinner for 230 people in our banquet hall.

Please visit and learn fascinating facts from the free guides abut the historical saga and thrill of the art of the carousel ! 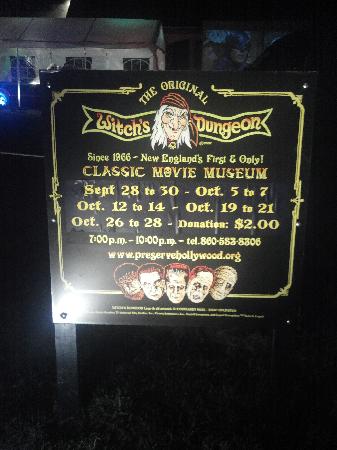 Figure of actor Bela Lugosi as "Count Dracula" at The Witch's Dungeon Classic Movie Museum in Bristol, CT. Open weekends during October, since 1966

this is a very unique attraction dont let the cheesy outdoor appearance fool you. inside there are MANY unique props from MANY classic horror movies. It is definitely worth waiting in line for. if you have children be prepared to wait in line for up to 30 minutes and there is no public bathrooms. this is great for all ages and its worth seeing at least once. This is great for someone who is an old fashion cheesy horror movie fan. 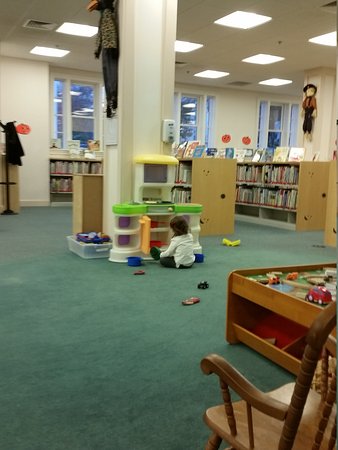 We love the Bristol Public Library. There is a wonderful play area for children of all ages. It was a well-kept building with lots of events and friendly staff. 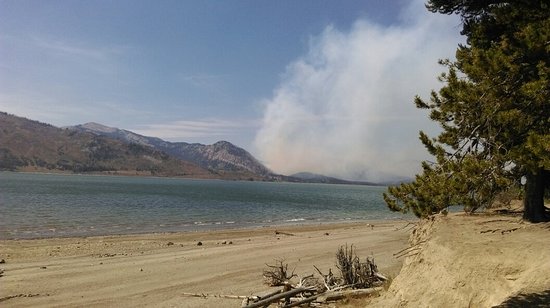 Took my kids there and now take my granddaughter. Good slides and walkways. Good swings - ones for larger kids and ones for smaller - along with smaller slides. In summer a cute splash pad that has water come up so kids can cool off. A bathroom/change area, large field behind that is good for sliding in winter. 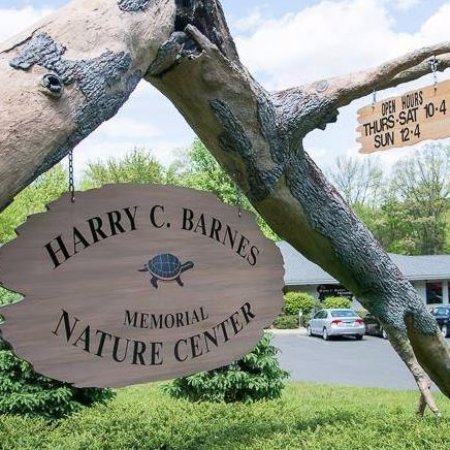 Trails open 365 days a year, dawn to dusk. Visitor Center open Thursday, Friday, Saturday 10-4 & Sunday 12-4. New exhibits and activities, view our extensive collection of reptiles and amphibians, meet live birds of prey, try your hand at one of our many interactive exhibits, and by all means, explore our trails!

The center has well maintained trails. Easy, short walk for families with young kids or elderly grandparents. The center has made wonderful updates with interactive activities for children of all ages. Live animal displays with informative staff on site. Gift shop with drinks and snacks available for purchase. Plenty of free parking. 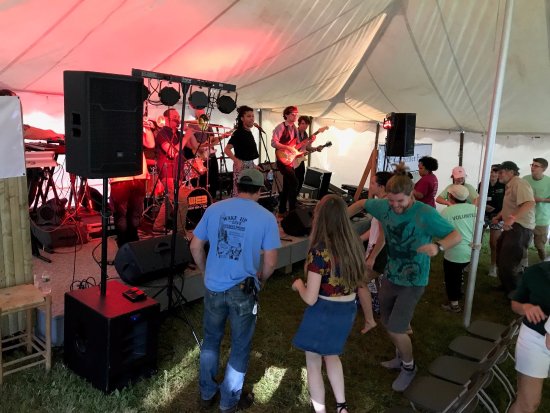 280-acres of varied habitat, a lake, streams and miles of nature trails. School programs are taught here and it is the home of Indian Rock Summer Camp. The trails and facilities, including two authentic wigwams, provide the perfect setting for all ages to learn about our natural and historic heritage. Onsite demonstration farm with an apple orchard, flock of sheep, a cow, chickens and turkeys.

This past July (while visiting friends in the Bristol area), my fiance and I attended a music festival entitled Music on the Farm, at Indian Rock (while driving around Bristol, we had seen a banner advertising this event in the downtown area). The event featured three musical acts: Wanda Houston and HBH (jazz and blues), Goza Latin Band and West End Blend (funk and soul). All 3 bands were fabulous!! Our lawn tickets for the event were $30 which was a steal! There was great food, wine and beer for sale at a great price. It was a beautiful day weather-wise and the staff/personnel working the event were very accommodating and friendly. We were able to walk the grounds of Indian Rock during band breaks and the venue was spectacular! We look forward to next year’s music event! 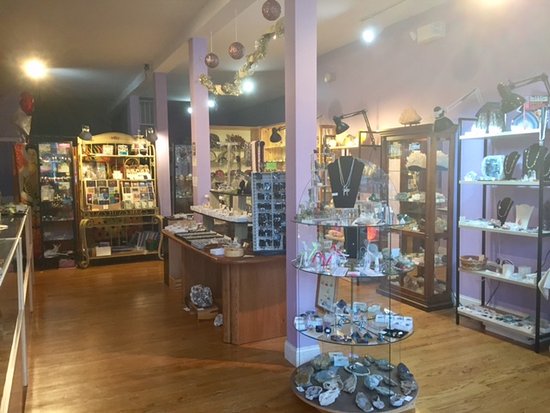 Reviewed By Adrienne B

Every time I go into the store, I want to buy everything! Very unique jewelry. Lots of healing stones. Knowledgable staff. Very customer orientated. On several occassions, I have stopped in, with no idea, what to purchase as a gift, Susan is always ready and willing to help with the decision AND even sometimes, make the jewerly right on the spot! She is fabulous!