Vienna (/viˈɛnə/) is a town in Fairfax County, Virginia, United States. As of the 2010 United States Census, it had a population of 15,687. Significantly more people live in ZIP codes with the Vienna postal addresses (22180, 22181, and 22182) bordered approximately by Interstate 66 on the south, Interstate 495 on the east, Route 7 to the north, and Hunter Mill road to the west.
Things to do in Vienna Reviewed By RICHARD B

....if I were a loving brother of his, I'd gently encourage him to bring in a consultant to "Do something about the #@& racket!" :) My guess is that there's a way to add some sound absorption and still retain the wonderful interior design. ----- I've seen other postings of the loud environment, so, business is so good that its not necessary/desirable to get the decibels down....... 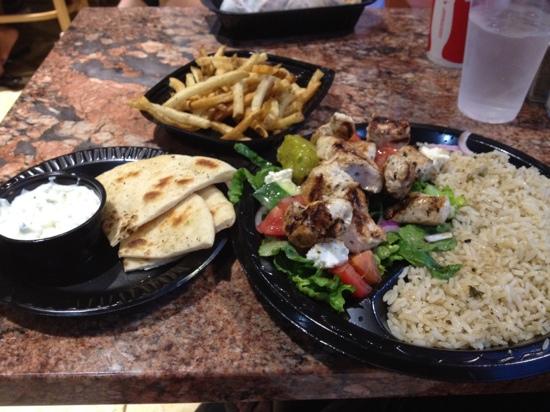 Confused counter person, entered wrong order. Line took forever. Chicago gyro (beef and lamb) was just okay - definitely have had better. Will go to the full-service Greek place up the street next time. 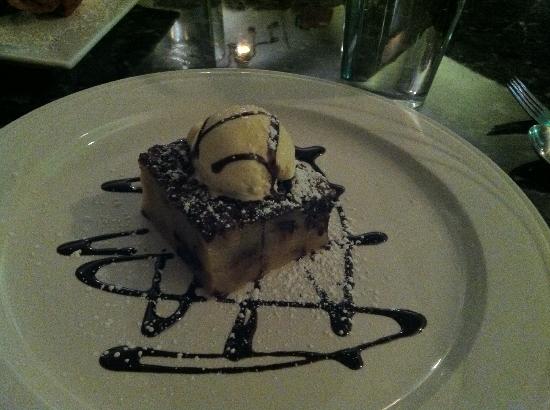 Globally influenced American cuisine in the heart of Vienna, VA.

Interesting, quaint, good food, about the right pricing for the DC area. Staff was friendly but not overly so. Professional. The food was middle to small size portions. The taste was good but not great. I had the pork belly and a dessert which was also small. I have no complaints at all but they really did not wow me. My dining partners made no overt positive comments except for their fried apple pie dessert. 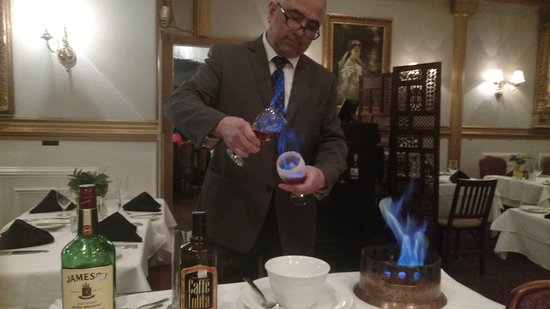 We were warmly greeted when we entered the restaurant and given our choice of tables. Wonderful ambience and atmosphere, delicious meals, and excellent service. The restaurant manager (he was much more than that) mingled among the tables, and in a timely and appropriate way checking to make sure everyone was happy. The restaurant filled up quickly (we had a 6:30 PM reservation), but the tone was quiet, murmuring voices and an enjoyable get together with friends we hadn't seen in some time. The manager came around after dinner was done and dispensed a perfect portion of port wine to top off the meal. A very enjoyable experience we will happily repeat. We offer a Neapolitan inspired menu of made-from-scratch dishes that represent traditional cuisine. These meals pay hommage to the memories of Campania, the region of our heritage. The dishes are typical to the working class neighborhoods of Napoli, Salerno, Capri and the dozens of small villages along the prized Amalfi Coast.

Pazzo Pomodoro is in a small strip mall in Vienna, the only neighborhood Italian restaurant in the immediate area (if you don't count Bonaroti, more of a fine dining place, and Da Domenico, more of a stodgy old-school style closer to McLean). The hosts make...MoreHey Jeff, Happy New Year and thanks for taking the time to share such a great, detailed review. We really appreciate it and look forward to seeing you and your family again very soon. - Jimmy Audia, Owner 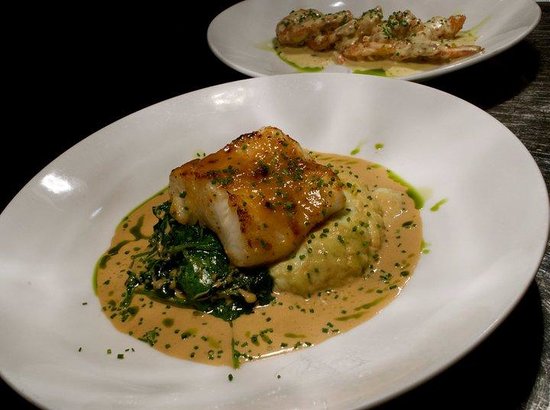 Bazin&apos;s on Church offers a contemporary American menu featuring organic and seasonal ingredients. The wine bar features a collection of wonderful wines from around the world, with an emphasis on California. Bazin&apos;s recently received the 2014 Wine Spectator Award for Excellence. We have over 400 wines to choose from. Upon being diagnosed with Celiac Disease several years ago, Chef and Owner Patrick Bazin has created an entire gluten-free dining menu. Rather than modifying current dishes to meet dietary restrictions he has created fresh and innovative dishes to please everyone&apos;s palate. Whether you too have to modify your diet or just choose to follow the gluten free lifestyle you&apos;ll enjoy these changes to our menu.

We found the food and service to be of excellent quality. We both had the monk fish and found it to be perfectly cooked. Our friends had the steak and said they enjoyed it as well. The owner visited many of the tables to be sure everything was to their expectations. We found him to be engaging and genuinely interested in assuring his guests were enjoying themselves.

We asked to be seated at the “chefs table.” This added to our experience. It was fun to watch the choreography of the chefs as they prepared each dish. They even gave each of us a large shrimp appetizer.

We will definitely return and try another dish. 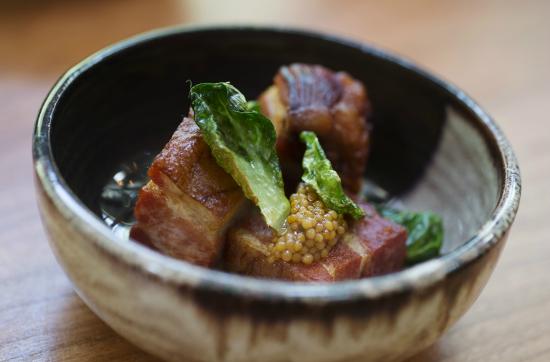 This is a nice, clean, comfortable microbrewery with aspirations as a gastro-pub. Attentive service and complimentary valet overcome the inconvenience of arriving at this suburban warehouse location. Unfortunately, on the night we visited, the appealing menus items almost universally fell flat. A perfectly cooked risotto dish arrived without even a hint of salt rendering it totally bland and tasteless. This was the case with the pork belly, and grilled mushrooms. Roasted brussel sprouts were served with a fish sauce, which is naturally very salty, and seemed to overcome the kitchen's aversion to the use of even basic spices. Charcuterie offerings were fine but felt a little over refrigerated. The vanilla bean stout was a highlight of the beer offerings. The others were relatively bland an uneventful. The wasser pilsner was a dead ringer for Coors Light with a stronger rice after taste.

The service was quick and attentive without being obtrusive. The manager approached us to apologize for a delay in getting the pork belly out, which we honestly hadn't noticed or commented on, and said he'd remove it from the bill. That was nice but the dish was in fact on the bill. Service seemed tired as the night wore on and a second flight of beers was never offered and we were happy to collect the bill without desert - which we feared would have been as disappointing as the other dishes.

This restaurant has a really nice, modern interior, and the number of tables is limited by the scarce parking - thx to Vienna city codes - keeping it warm and bustling but not jam packed. Service was fine. Food was average at best. I'm not sure if we came on an off night but the kitchen and brewmeister needs help to realize an elevated local brew and higher-end bar food establishment. Vienna needs this kind of place so here is hoping they succeed. 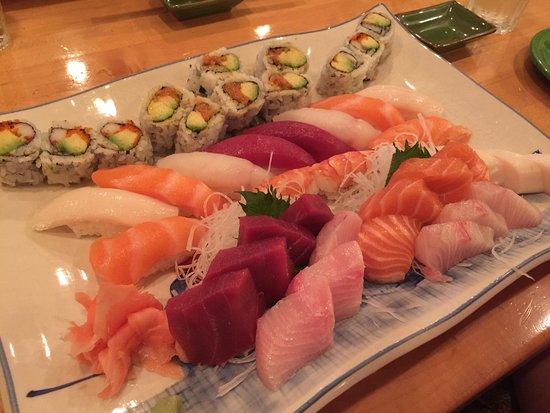 Lunch box with sashimi, California roll, tempura, tofu, sprouts, pot stickers and rice for $10.95 pretty much sums up the value side of the review. A lot of food for a small price, and the good is uniformly and consistently fresh and good. It doesn't have the glitz of Morimoto or Nobu, but it doesn't have the pricetag, either. A very solid restaurant and a terrific value. 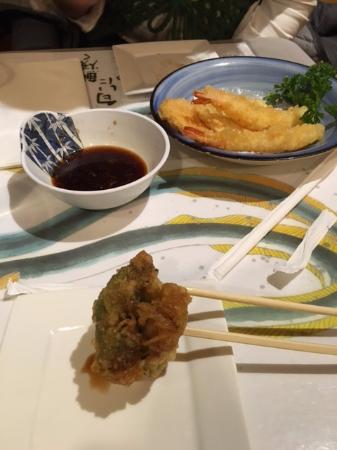 I found this amazing restaurant! We came here because we read lots of great stuff. It's correct what most people think about the place. The servers are extremely nice and attentive. We spoke with Shuko (or Shunko?) who manages the restaurant. What a great spot. Right in the middle of nice residential neighborhood. We came here for dinner on Friday night and the place was crowded. The restaurant isn't so big but sushi bar could accommodate 6-8 people. The price is so reasonable too. I had my sashimi deluxe and Hubby got his sushi deluxe. We loved our deluxe. Sashimi cut was perfect. The selection of sashimi was exceptional! Mine came with one fried shrimp head that you can eat, not just to stare at it or not for a decoration either. Hubby seemed to enjoy his sushi deluxe very much too. We were so glad to have found this restaurant. We thought of going back and we did go back. We were told that a reservation for lunch on weekend is highly recommended. True enough, we made a reservation and surprised to see how crowded the place was on weekends. For lunch I had Chirashi and Hubby got his beef bento. What a great surprise, my Chirashi came in 2 separate plates. That was a bonus! They separated raw fish and rice. The rice served with lotus vegetable and garnished with sesame seeds. This Chirashi was like the Chirashi of the century. Don't get me started with Hubby's Beef bento. That's like trying to switch a vegetarian eater to a meat eater. That's what they did! Not fair! The whole visit is like going to Disneyland and landed on Mickey Mouse lap! Super duper experience! Must go back! 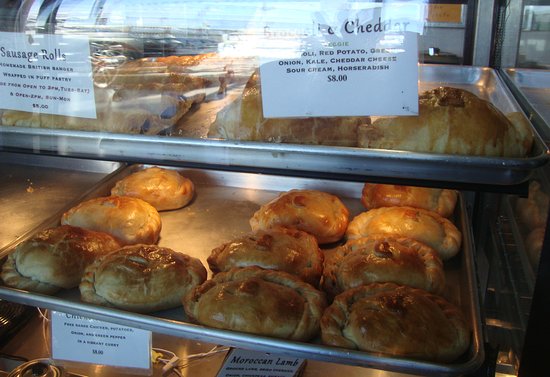 Visited 2017-11-15 at 1120. Purchased traditional pasty take away, $8.70 with tax. The pasty was fresh out of the oven. It was properly cooked, filling delicious, and pastry was flaky and wonderful. The quality and selection is consistently excellent. I always make it by when traveling in the DC metro area. Grab one to go or eat there in the very small dinning area. You will be pleased.