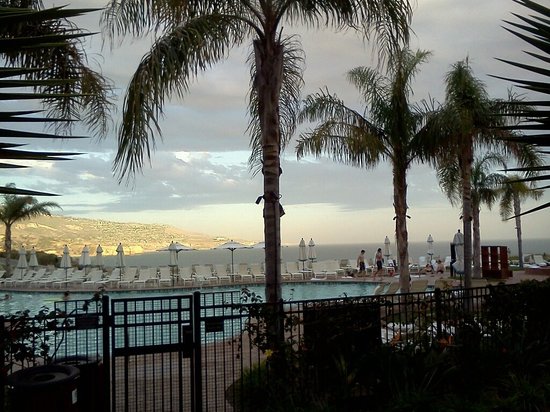 It&apos;s one of the dining options at the Terranea Resort Hotel in Rancho Palos Verdes.

We booked for Xmas but ended up cutting our trip short. Quantity rather than quality seems to be the maxim here. Overpriced, poor quality and tasteless food was the regular output of the Catalina Kitchen and vegetables were scarcely seen at the buffet style meals. Bar service poor and bar staff unable to serve a decent gin and tonic. Overall a dreadful experience never to be repeated. Only saving grace was the restaurant staff - especially the young male manager/supervisor. 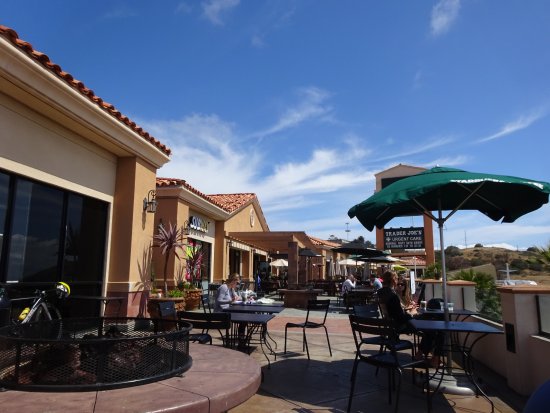 The coffee, everyone know.. the ocean views are second to none. Nice patio area and plenty of indoor seating as well. The next closest location is in Ralph's grocer and while I use that location if I'm headed down the hill to run errands, I will always take the time to drive to this location and appreciate the beauty the area offers us. 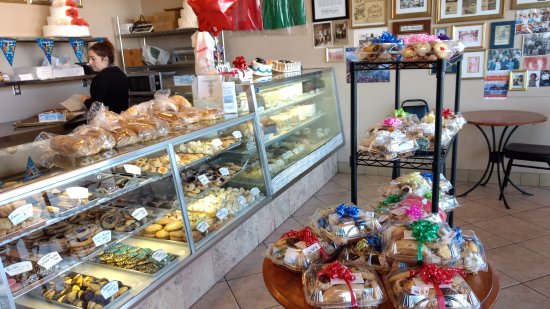 Amalfitano's pastries are out of this world! The bear claws, choco croissants and muffins to die for. The Easter pastries, pandoro, cookies and hot crossbuns melt on your tongue. The rolls, hard and soft, are yummy. It is advisable to place an order 2 days ahead to avoid the disappointment of your favorites being sold out. 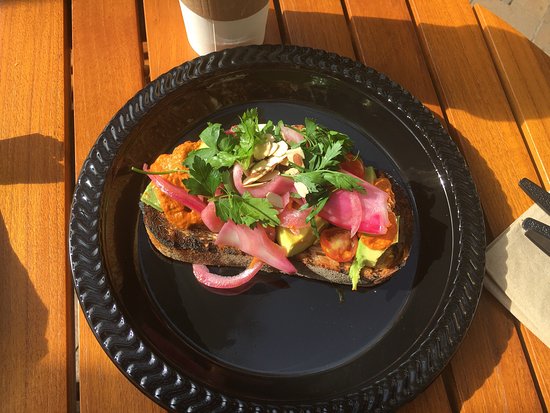 If you're in need of an early morning espresso, a mid-day smoothie or snack, or need to stock up for some evening cocktails or dessert, Sea Beans is for you.
In the morning, fast, casual dining options help you get the day started quickly if you're not looking for a big, sit-down meal. Afternoons, the salads, sandwiches and snack items are perfect for pre-hike, pool snack, or wherever your day takes you. The refrigerated section has a nice selection of beers and wines, for your own balcony cocktail hour, or sitting and watching the waves. Assorted sundries available as well, should you need a new pool magazine, some aspirin for the morning after, or forgotten sunscreen. A great resource on property to fill those gaps in your day. 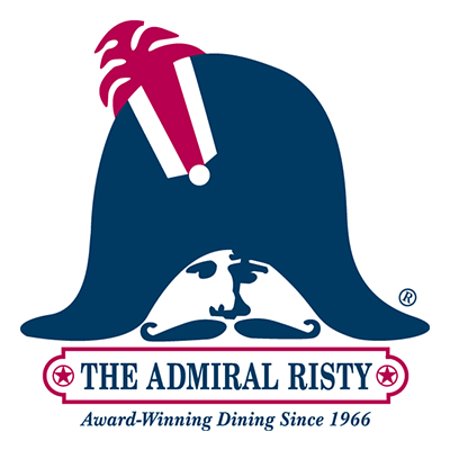 Welcome to The Admiral Risty, a Palos Verdes Peninsula tradition since 1966! Conveniently located in Ranco Palos Verdes, this upscale American restaurant overlooks the Pacific Ocean with a beautiful view of Catalina Island. We offer award-winning food featuring fresh fish, aged steaks, lamb and poultry dishes, along with assorted appetizers including oysters, clams, house-cured Salmon Gravlex and house baked sour dough breads. Additionally, our full service bar offers a variety of cocktails, martinis and an extensive wine list recognized with the Wines of Excellence Award. For a special occasion celebration, The Admiral Risty is the perfect choice. Enjoy our spectacular ocean view and warm atmosphere while our experienced and competent staff members provide the perfect plan to meet your every need. We invite you to visit our website, then call to schedule your next event or make your dinner reservation and see why everyone is raving about The Admiral Risty.

Bring a big bag of money, Yes, you will be dazzled by this very popular and famous sunset view restaurant. High prices for very average food. Great waiter...I had a big baked potato and small piece of fish, gobs of tartar sauce, out of broccoli so we had hard asparagus. Bread barker appeared with slices of various bread...of no interest.
Bartender was great and staff seems to stay there...entrees run from $30++ to well over $45.00 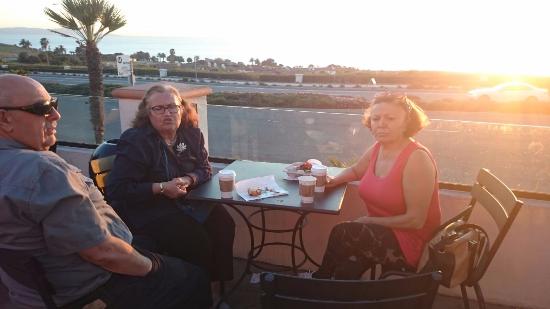 I am a Starbucks fan. What can you ask for when you have your coffee/tea and the sea view all in one place. After the sun set you can head next door for dinner. There are several diners there - Japanese, Thai, American and Italian. No dinner there you can pick up your favorite fixings for a home cook meal at TJ 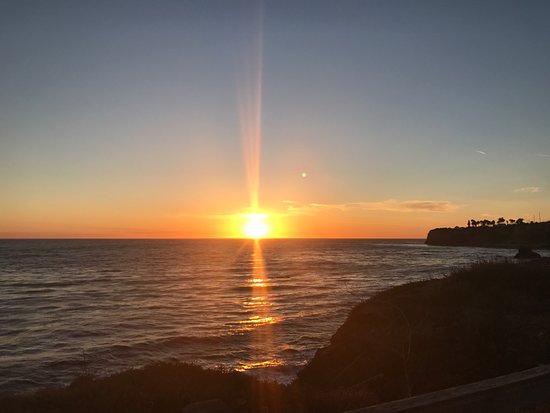 My wife and I had a wonderful late afternoon meal at Nelson’s while enjoying the breathtaking view of the Pacific looking across to Santa Catalina Island from this fabulous eatery’s patio. It was Happy Hour on a Monday and the selection of savory shareable small plates and house wines for amazingly reasonable prices satisfied our appetites but even more so our tastes for fresh, expertly prepared and absolutely delicious food.
Starting with a fine California Cabernet Sauvignon and the best house prepared guacamole and taco chips we have had since our last trip to Mexico, we shared Mahi Fish Tacos, Crab cake sliders, and Fried Portabello Mushrooms with a spicy sun dried tomato sauce. Our waitress Kayla was one of the warmest, most personable, efficient and courteous servers that you could wish for. She catered to our every need and helped make this a memorable meal at this beautiful resort restaurant.
Whenever we are at Terranea to eat we are grateful for the gourmet quality food served in a classy yet casual atmosphere, at Nelson’s and for the chance to experience the 5 star resort service, quality and ambience without breaking the bank. 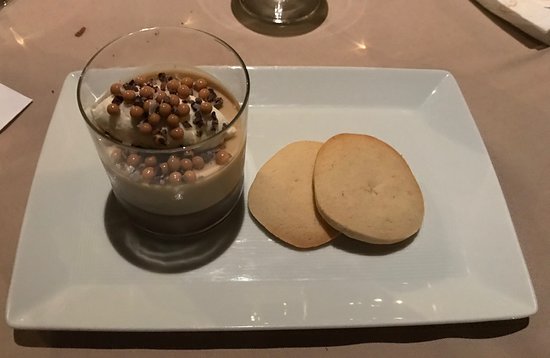 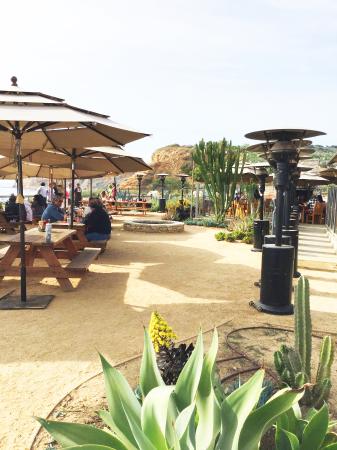 From the moment you pull up at the valet-parking desk, you know you are in for a five-Star treatment. Walk through the main hotel and out onto the ocean-facing terraces, or take a ride in one of the courtesy golf-carriers down the slope to Nelson's bar and restaurant. It is is situated on a promontory overlooking the Pacific - California sunshine and a gentle breeze off the ocean - what could be better.

Families are welcome and there are acres of lawns and sand dunes where they can burn off some energy.

Wide range of choices on the menu including children's meals and an extensive drinks list. Service is efficient - no delays - and attentive without being intrusive. For a prestige venue in a prime location, prices are quite reasonable - we had five one-course meals with drinks at an average cost of $35 each. We look forward to our next visit. 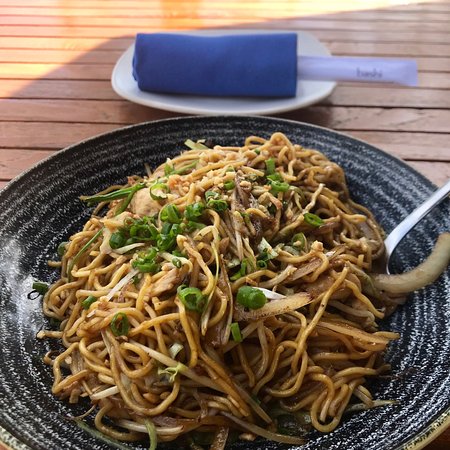 Another excellent restaurant at Terranea, Another batch of brilliant chefs and bartenders......Asian inspired....I can't write any more, I'm too busy enjoying this.....you must taste for yourself! Please try the Green Papaya, Mango, and beet salad with shrimp, and fresh Thai Basil leaves...........