Morocco's coastal capital since 1912, Rabat has just over a million people. Modern and even reserved by Moroccan standards, the city also has many fascinating historic sites, including the picturesque Kasbah of the Udayas, built in the mid-12th century. The unique Hassan Tower, begun at the end of the 12th century, was meant to have the world's largest minaret, but was never completed. Just opposite the tower lies the 20th-century Mausoleum of Mohammed V, another of the city's main attractions.
Things to do in Rabat 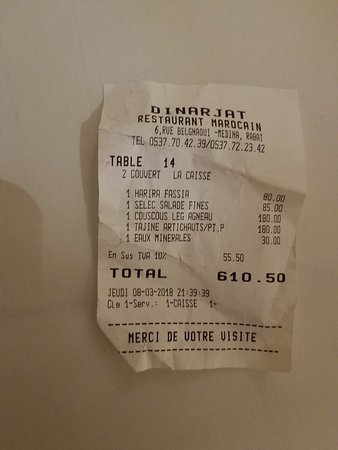 An exceptional environment with fantastic food and very kind staff. An easy restaurant to recommend! 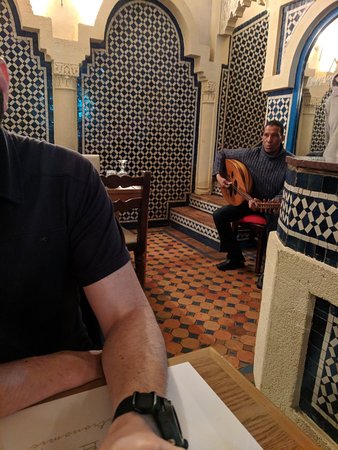 Tajine aux pruneaux, pastilla, vin local. A perfect lunch to break a day of visit. Pricey but charming and delicious.

Reviewed By Dorina A - Berlin, Germany

I was expecting to have a great meal and the tajines were indeed exquisite - healthy traditional Moroccan food!! Of course we had some tea, too - only the show the waiters offered every time they brought it was worth ordering it :) and the...MoreThanks for your visit and remarks 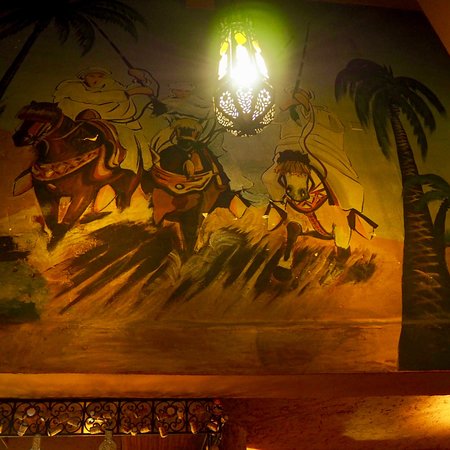 We dined early at this restaurant and so it was relatively empty and quiet, except for the musician. At first, we sat on the bench seats but we, and another couple, soon learnt the error of our decisions and moved to seats, from which we didn't slide towards the floor.
The Good
Once we were settled the cold, cold beers arrived and we were ready to order our meal. We both had chicken dishes, with rice and vegetables and were pleased with the quality.
The restaurant location is also convenient.
The Bad
The bill came with a surprise. The olives, bread, and soup were not ordered by us; nor were they complimentary - a charge was added to the bill.
Rookie mistake on our part - not to be repeated. 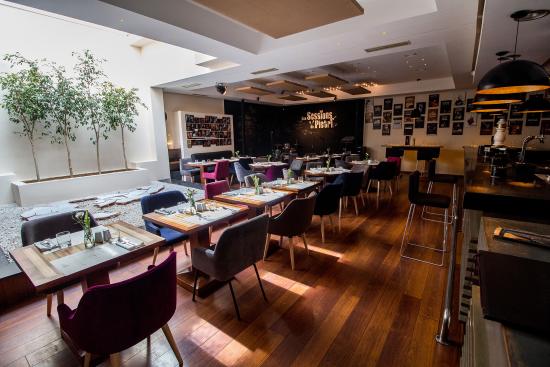 Great contemporary restaurant. The Moroccan salad starters were fresh and tasty, and all four dinners were delicious and beautifully presented. Truly unexpected for a hotel restaurant. A largely local clientele, always a good sign. Reasonable prices- dinner for four, only 750 DH in an upscale setting. Licensed too. Do try it in Rabat, so much better than another touristy set dinner. 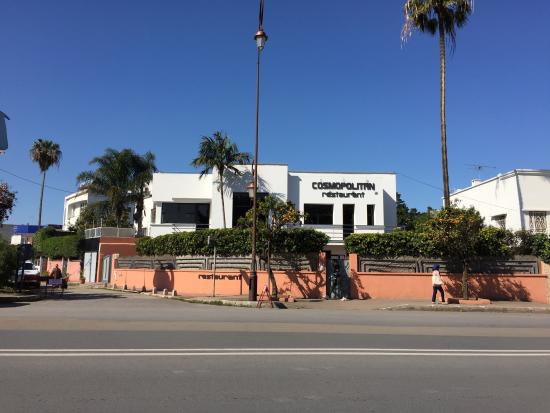 french cuisine in a vart deco villa renovated with panoramic wieww and private garden.Here is a more a house than a restaurant - where the lifestyle is practiced with mildness, discretion and charm. It welcomes you with respect, friendliness, warmth and very quickly as friends. The word customer does not make sense.

I was taken to the Cosmopolitan for a working business lunch. You can eat outside in the garden, but we went inside where the décor was modern and restful, and the surroundings conducive to a business discussion. The service was unobtrusive, prompt and polite. As for the food, we all chose dishes from the daily specials list rather than from the main menu. I chose baby squid with chorizo and rice - beautifully cooked. The squid was succulent, and the flavours were Spanish with a slight Moroccan twist. Others had swordfish, which was delicious and beautifully presented (though one of our number sent her fish back to be cooked more thoroughly). For dessert, most of us ordered café gourmand - a coffee of your choice accompanied by four small desserts. Perfect! 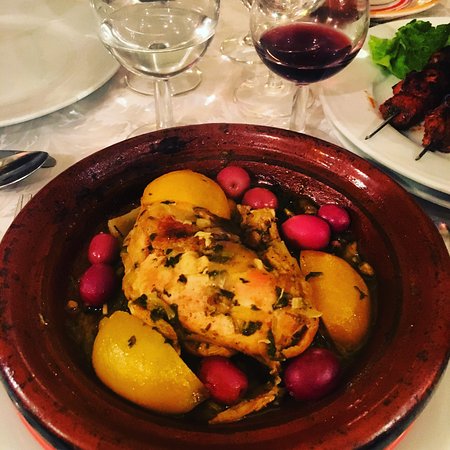 Gone to have a quick dinner with colleagues, this place is very nice, colorful and tidy ; very well mannered and helpful personnel, the Owner speaks some English too. They don't accept credit card but we managed to pay with Euro currency. Foodwise, very good, well presented and very tasty. 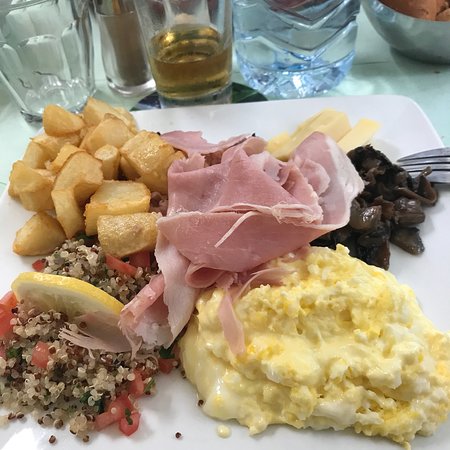 This place is located behind the French Cultural Center. It should be considered a "dependance", meaning you get here, mostly for french people of "fracophiles" a poor meal (mostly salads and appetizers) with the same price or more that you would pay in the center of Paris.....
You pay for the illusion of pìbeing somewhere else!
But the constant traveler knows that French cuisine is a solid and serious businnes, not an amateurial activity. This french joint with an english name doesn't really provides anithing to the reputation of French cuisine, on the opposite!!!
If you like to eat a bite of something, just go beside this place, in one of the many small eateries, you could get more satisfaction and a more fiendly treat for less than the 30% of what you would pay here.
Not really worth the visit! 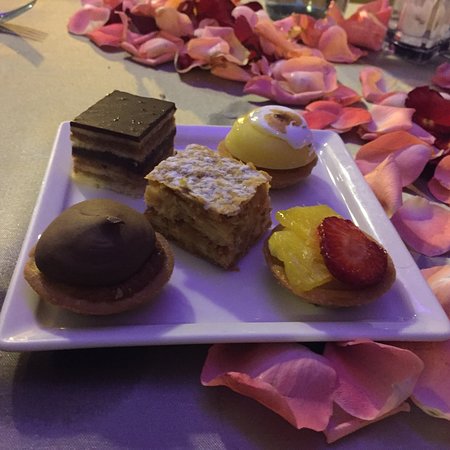 We heard it was a great fish restaurant...
but that was not our experience...
The Chablis wine was fine... and the wait person so pleasant until we complained, then she effectively disappeared...
The crab appetizer didn’t taste of crab and was very spicy (without any advance warning)... the risotto arrive barely tepid.. garnished with an old fibrous shrimp... with a boring tomato sauce...
They closed around us.. and left us sitting drinking wine... sooooo bizarre...
I will NOT go Back or recommend to anyone... 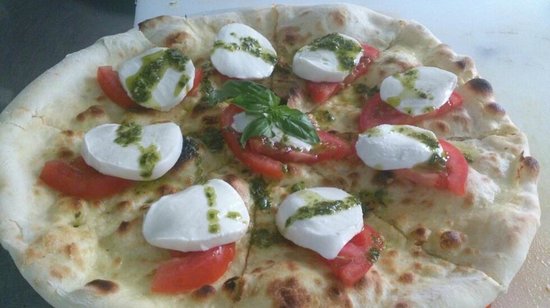 Located in the administrative center of Rabat, close to the U.S Embassy and the Italian Cultural Institute, "Il Giardino" restaurant is the right place for you to take a break, sit in the colored and bright Terrace and relax, enjoying the amazing italian cuisine of the chef "Giuseppe" served by his friendly and welcoming staff. From pizza to homemade pasta and the delicious dishes of the day made out of original italian ingredients, the great choice proposed by "Il Giardino" makes you taste the real "italian experience" even abroad. The inside room and the spacious Terrace are suitable for large groups&apos; gatherings/buffet (also by reservation) or for families, prices being reasonable and discounts being available for big groups. Open daily (except on monday night) for lunch from 12:00 to 15:00 and for dinner from 19:00 to 23:00. Internet wi-fi, payment in cash or by card.

When this restaurant started, within the compound of the Italian Cultural Centre in Rabat, we hope to be able to find, finally a good Italian restaurant.
Unfortunately this was an illusion, despite the great potential and the good faith of the staff.
The restaurant has never gone above the category of "cantine" a place for eating quick meals on the lunch break of your job. And at the end of your meal you are still hungry!
What I would like to save is the pizza, but not always, because for same reasons most of the time is not well done.
Pity, Italian cuisine deserves better than this