Papamoa Beach is a suburb of Tauranga, located about 11 kilometres from the city centre. It is the largest residential suburb in Tauranga, having a population of 20,091 at the 2013 census. It is bordered to the west by Mount Maunganui (east of Sunrise Avenue and Hibiscus Avenue), the east by the Kaituna River (separating it from the Western Bay of Plenty District) and to the south by State Highway 2. Papamoa Beach has 16km of white sandy beach stretching from the boundary with Mount Maunganui in the west to the Kaituna River in the east. Widespread settlement of the area did not start until the early 1980s and prior to this Papamoa Beach had been largely a rural area. Once a small and tight knit community, many of Papamoa Beach's sweeping paddocks have been swallowed up by urban development. Papamoa Beach is currently one of the fastest growing suburbs of Tauranga, with many different subdivisions developing concurrently on different blocks of land on the fringes of the suburb.
Things to do in Papamoa

Bluebiyou provides a great friendly atmosphere with brunch/breakfast on the weekends. Open everyday for lunch,dinner and special occasions. Premium beer and a good wine list from the bar with pizzas and bar snack

We discovered this restaurant by chance and so glad we did. We called in during the afternoon and booked for that evening. When we arrived in the evening the staff recognised us and sat us at a table overlooking the ocean. It was busy but a good atmosphere. I had the duck and my husband had the chicken Provençal both delicious. As there was nowhere else nearby that offered 'real' food we booked for the following night, our last night at Papamoa. Again good service and food, on my recommendation my husband had the duck and I had the lamb which was nice but the duck definitely had the edge. Thank you to the staff for two enjoyable evenings. 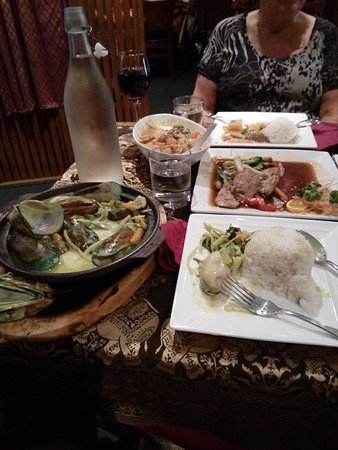 With a passion for Thai food and excellent customer service, Thai Thani pride themselves on fresh, exotic flavours, and delicious Thai food served in the restaurant, for takeaway or delivered to your home. With experienced and talented Thai Chefs and an extensive menu including over 35 mains, you&apos;ll want to enjoy these delightful dishes over and over again. The owners of Thai Thani lived in Thailand for 9 years and wanted to share their passion for fresh and healthy Thai food with others. We are fully licensed and also offer BYO wine. Thai Thani is located in Fashion Island - a popular outdoor shopping centre full of fashion stores so when you are needing a break from shopping pop in for a tasty lunch between 11.30am and 2.30pm or for dinner from 5pm. Or collect takeaways on your way home! This ever popular Thai restaurant has a relaxed atmosphere perfectly suited to the Papamoa Beach laid back lifestyle. Call in and visit us - you are always welcome. We also have a "sister" restaurant Thai Thani 2 in Wharf Street, Tauranga just off the Strand - so if you are visiting Tauranga be sure to call in and savour the same delightful Thai food as here. Our Tauranga restaurant offers dine-in at fully licensed premises for your dining pleasure, takeaway and home Delivery.

We often dine at this place and I have reviewed it in the pass giving it 5 stars so don't know what has changed since my last visit but all of our group were disappointed. Maybe their usual chef wasn't on and maybe some staff were sick but they had a very young inexperienced girl working on a busy night and one poor girl behind the counter frantically taking take away orders along with taking table orders and seemed very run off her feet so no wonder she couldn't manage a smile at all , then when the food came out all of agreed our usual dishes were skimped on with veggies compared to the past so hope it was only a glitch on the night and if so we will continue to dine there regularly. 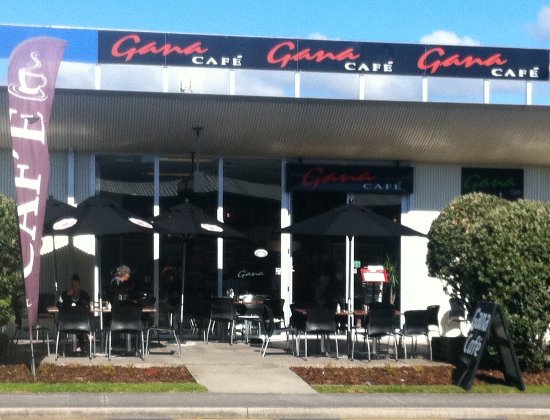 Gana Café is a funky café located in the lovely Papamoa. We are Open 7 days a week 7am till 2:30pm

Browsing through the cabinet food my initial thoughts were how expensive the food was in this cafe (more than your average Mount cafe).Nevertheless, i ordered the spinach/mushroom filo which was $9. I was really dissapointed with how small, tasteless and dry it was & even more annoyed at what I had paid for this terrible food! I wont be going back or recommending anyone else to try it out. On the up side, the lady who served me was pleasant. 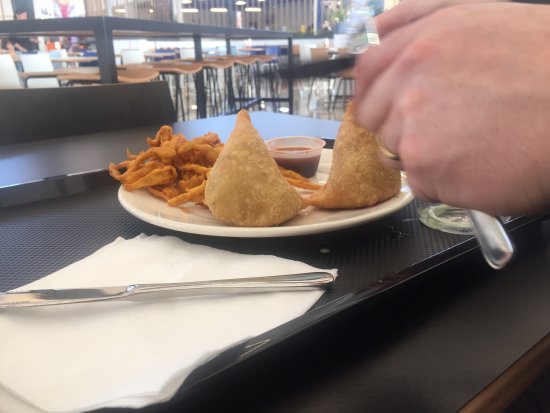 This restaurant is no longer a stand-alone venue but part of the Papamoa Plaza foodcourt. Thankfully the food is just as quality as the former restaurant (we were really scared it would be runny and stale from sitting in trays all day long), but without the nice touches of the former venue. We have to collect the food from the counter - no table service, and the sizzlng platter entree is no longer on the sizzling platters which means it gets cold quicker. :-( We still dine here as they have had a $45 dinner special which is $15+ cheaper than the same at other restaurants, but it's not such a 'special' event anymore, ie, I would not recommend for special birthdays or occasions as the venue is less private and although new and modern/clean, will lack ambience. This is my favourite cafe in Papamoa...consistently great...great coffee...great food
Nice little shop and garden area. Great for kids as they have a separate area where they can play...dress up gear for them and chickens to feed
Staff always friendly
Yes definitely the best cafe around 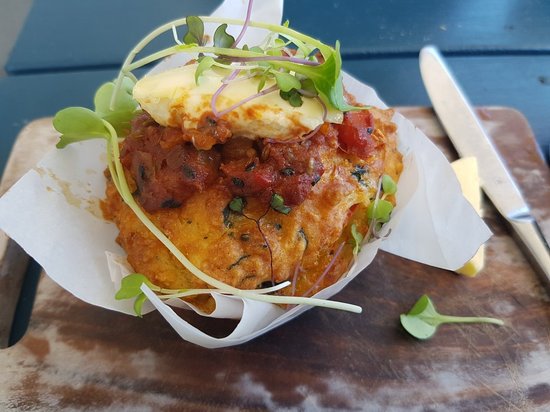 Cool, funky relaxed busy cafe minutes walk from Papamoa East Beach. Great food, Organic coffee and friendly service. We cater for all dietary requirements. We have a lot of GF and vegan options

We recently visited this cafe in Papamoa while the food was ok the service was very poor. Food was delivered to tables & customers were told cutlery was at the front counter to go & help themselves (another lady actually passed comment to the girl who put the food on table but she just walked away) . We also tried to get water for the table to be told it was also at the front counter but no glasses were available even on asking numerous times still no glasses so we ended up sharing a glass between 3 off us while other table resorted to using coffee cups. Staff seem unapproachable one in particular (the younger girl) you would ask something & she would never return with a reply but seemed to like re wiping one table over & over I guess to look busy. Really can't say I would recommend or go out off my way to return. We are a gastro-pub that has a wide variety of a la carte food options as well as a full bar featuring a vast selection of local wines and craft beers on tap. We are located across the road from the beach in beautiful Papamoa with a lovely beer garden on two sides of our premises. We have Seating for over one hundred inside and out, so if you want to take advantage of the all-day sun outside, or seek some shelter inside, you are always welcome at our friendly yet relaxed restaurant-bar. We also have a courtesy van, so give us a call for a pickup.

Lunch with friends. Not much atmosphere. Very uncomfortable seats. Very average service. Packet calamari. Fish and chips were rubbish. Generally the quality is poor, badly presented, prices are high. You would expect a view and a tablecloth for what they ask.
Really just a poor joke. 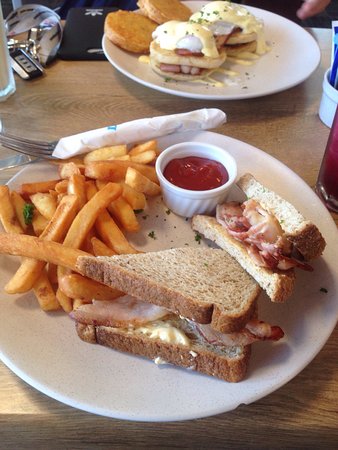 Lovely and clean. Good sized tea and coffee. Only negative would be is that it was quite busy and rather noisy, couldn't hear our conversation. Friendly staff. 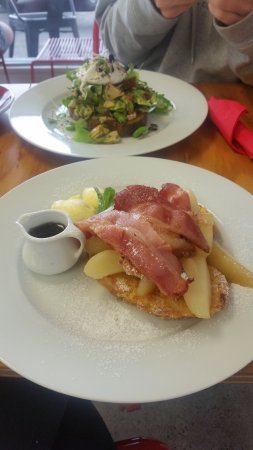 Thought we would go and have breakfast after Reading reviews on this site. Wow what great food they serve ! We were a little apprehensive when we got there. Does not look like a great place for great food?
Sadly this great little cafe is let down by the exterior view and the interior design. We did have second thoughts when we arrived. Looks like a cheap bakehouse/truck stop. The interior does not meet with great first impressions? Certainly has an identity crisis? I am unsure what this is meant to be ? a take out shop ? a cafe ? Really uncomfortable stools and wall paper pasting table in the middle. There are two long window tables looking out to the car park. Outside Seating.
The food however was fantastic. Best breakfast I have had in ages. The cafe itself does the food a real injustice. The quality of food is awesome. Maybe it is a way of keeping it for the locals? I had the French Toast which came with bacon and pears. Amazing ! My wife had bacon and eggs which were also really nice. Great (Supreme) coffee. I would definitely recommend you try this odd little cafe for breakfast if you are in the area and want to take a punt. You won't be disappointed. Much better than some of the cafes at the Mount...
We will be back....

Good cafe with excellent food selection especially the doughnuts with fresh cream and other yummy treats. Whatever issues they had with coffee quality have been resolved and the service was efficient and friendly. Environment is typical of a mall cafe but there is a good outdoor area fro kids to roam in and they have a water bowl for dog customers too.