Top Things to do in Madisonville

Madisonville is a city in and the county seat of Monroe County, Tennessee, United States. The population was 3,939 at the 2000 census and 4,577 at the 2010 census.
Things to do in Madisonville 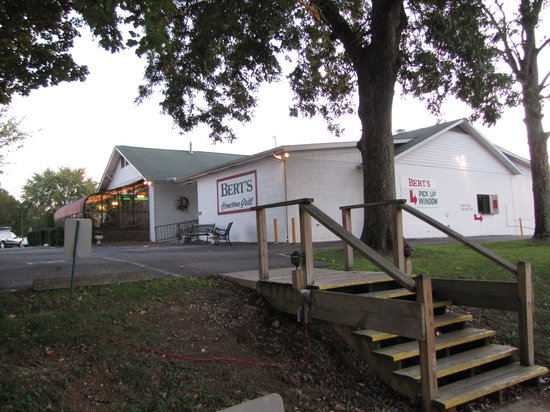 We had dinner here on a Sunday night and it was packed. The staff is very friendly and efficient. My wife and I had steaks and our son had pizza. My steak was cooked pretty well but slightly over done. My wife's was way over done but they made her a second that was perfect. The pizza was very good as well. The salad bar was also very good. 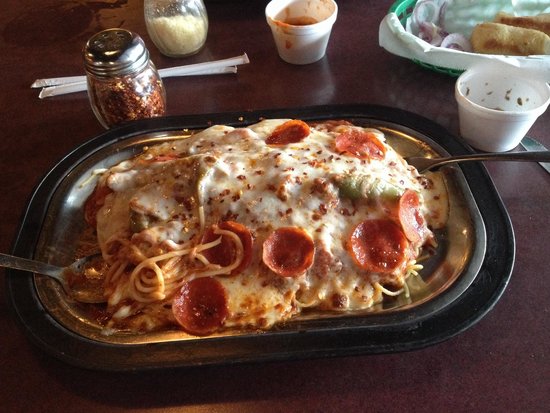 This place was recommended by a group of family members and it didn't disappoint. I ordered "The House Special" pizza and it had a very good homemade type of taste that you just don't find much anymore. The ingredients were very fresh tasting.

The service here was very good with very attentive waitresses. I ordered and the pizza was on the table in about 15 minutes.

The only thing I didn't care for was how loud the restaurant was. Everyone was chatting with one another as expected and loud music was playing. The brick walls kind of reflected all the sound back across the area. It was hard to talk to the person next to you.

I'll definitely be back to try more dishes the next time I'm in town. 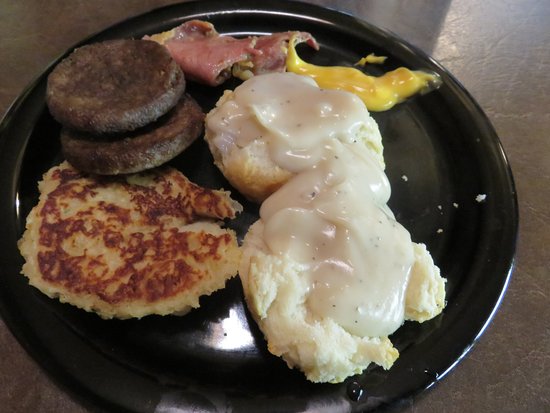 Join us for southern home-style cooking and hospitality! We are a full-service restaurant with an extensive menu as well as breakfast, lunch and dinner buffets. Located across from the historic courthouse in downtown Madisonville. We&apos;re a regular for locals and for those passing thru who&apos;ve been tipped to dine here. Courtesy car from Monroe County airport and motorcycle clubs welcome. Call in advance for groups so we can be prepared.

It was time for dinner and we didn’t feel like cooking. But this time of the year, it gets dark early so we didn’t want to have to drive to far for our evening meal… There were a couple of local restaurants that we hadn’t eaten at in a long time or ever, so I picked one and off we went! Donna’s Old Town Café is located in downtown Madisonville Tennessee. This restaurant has been in business for many years and while we ate here once before…probably 6 or 7 years ago…it was time to try it again.

The restaurant is long and narrow with 2 seating areas…one in the front and a second one back by the buffet tables you can glimpse in the next room. There is a small gift shop at the front near the cashier.

I was looking forward to dinner! What I’d read somewhere and forgotten was that Thursday night’s buffet at Donna’s Old Town Café is a breakfast buffet… We like breakfast so we decided to try it vs. ordering off the menu. One serving table provided all the salad and dessert related items… The adjoining ‘hot’ steam table provided the meat, eggs, pancakes, potatoes, soup, gravy, biscuits, etc., etc.

My wife decided to start out with the salad table. She chose 3 different types of potato salad… She loved 2 of them and the 3rd one was just OK. Salad table…heck no! Not for me! I went directly to the hot serving table where I picked up a biscuit and pepper gravy, a bit of country ham, a couple sausage patties and a potato pancake. There was also some yellow stuff that was some kind of melted cheese…

I didn’t ‘understand’ the potato pancake. It wasn’t warm and it lacked that distinctive flavor in a top notch potato pancake. (Maybe it wasn’t a potato pancake…but standard pancakes were offered right next to these) The sausages were good…nice flavor and the biscuit was very good as was the pepper gravy.

My wife went over to the hot table and came back with a biscuit with the pepper gravy, some scrambled eggs, cheesy potatoes with onions, country ham and bacon and cooked apples. She liked everything she had, even commenting that the scrambled eggs were better than usual for being on a buffet line. She also thought that the pepper gravy, not usually our favorite, was very nice.

My second trip to the buffet netted another biscuit which I covered with a scoop of thick chicken dumpling soup. I asked the very young waitress if the vat of chicken dumpling soup was intended to be poured over the biscuit. She’d never heard of such a thing…but Donna (the owner) was sitting nearby and she told her that it had been a common practice in the past.

For dessert my better half chose a piece of what she thinks was banana spice cake with a maple-sour cream icing. She liked it just fine. For my dessert, I chose a pudding of some kind. It had chocolate, pineapple, custard and whipped cream but it was unnamed so I’m guessing a bit.

I personally would have liked it if the different non-fresh vegetable food items had been labeled as to their identity. I’m not much into guessing about my food selections. What were the 3 potato salads…was that a potato pancake…what were the desserts…what were my soup choices, etc.?

My wife enjoyed her meal more than I did mine. Both potato offerings were loaded with onions…which I’m not crazy about and I just don’t care for plain scrambled eggs from a steam table. The biscuits were excellent as was the pepper gravy and the chicken dumpling soup was tasty enough too.

Certainly the price was right! Our tab after taxes and before a tip came to less than $20.00… We will return to check out the normal dinner buffet which is served on Friday and Saturday nights.

Had to go to the courthouse - parked in front and had to check it out. I was so surprised at how clean it was. The selection was amazing and the taste to die for.

This has been in business in the Madisonville area longer than I've been alive. They have good, old fashioned fry cook food that is hard to come by these days. Remember.... this is an old, established diner. Treat your visit as such, you won't regret it. 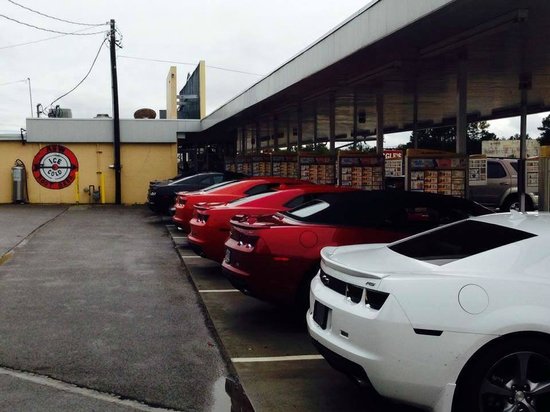 This drive in is a hold over from before I was born ( late 1970's) and has only changed its outside to match modern advancements. Food is good. Onion rings are really good. Access is easy, right off 411 hwy. Prices have increased but it's not too bad. Highly recommend.

I have been coming for four years now and nothing has changed, includes the price of the buffet. The owners are still there and management is a family affair. The quality, cleanliness, friendliness of staff, and fast service are still excellent. The buffet is awesome. Highly recommended.

I went to Capt. D's for lunch today, and ordered the 3 piece battered fish, with fries and slaw. The fish was hot, crispy but still moist inside, and very tasty. The fries, slaw and hushpuppies were all good.

Have I had better battered fish in England....yes. Is there better fried fish down on the coast...of course....

But for fried fish in a fast food setting....Capt D's does an excellent job. 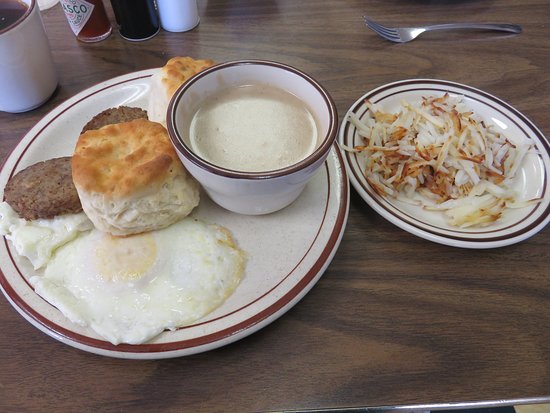 A small cafeteria style meat and three. Mainly a local crowd but an easy stop on highway 68 in Madisonville. Good quality if not remarkable. I'd certainly stop again for lunch. 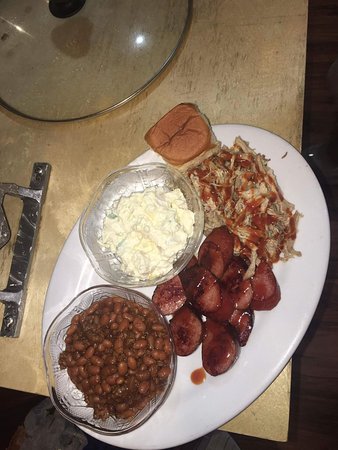 Nice new facility and very friendly service. Loved all three of the sauces available! Hard to decide which one to use. Enjoyed a Shredded Pork sandwich, Smoked Chicken sandwich, and wonderful fried okra. No beer for sale. Great prices. Hope to return.