Top Things to do in Los Ranchos de Albuquerque 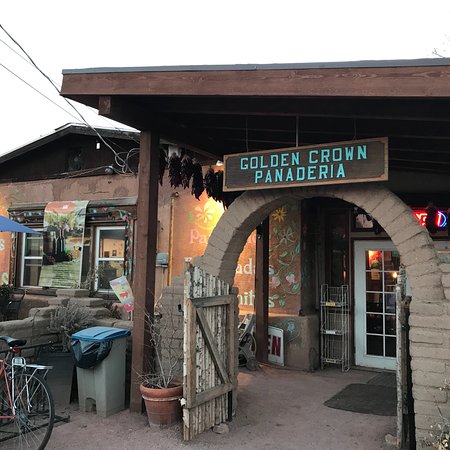 Golden Crown Panaderia is a old fashion neighborhood bakery in the Albuquerque old town area. We have had the honor of not only being on the Food Network once in 2004 with the show Food Finds. We are now being featured on Diners, Drive-Ins and Dives : Guy Fieri for our pizzas. We have supplied breads and pastries to many of Albuquerque&apos;s finest restaurants and hotels including the Hyatt Hotel, Petroleum Club, Smirolls International Cuisine, Albuquerque Convention Center, Amadoes Pizza, etc. Many of our wholesale and retail customers have been using our baked good for over 25 years.We are now strictly a retail bakery with an amazing coffee bar, We server the first ever New Mexican Style pizza, Our Garden fresh salads come from our indoor garden.The Food Network has featured our New Mexico Green Chile Bread. Empanadas, Pizzas, Our Turkey Bread Sculptures. And Biscochitos. We also carry beer and wine

From the moment we walked in we felt at home in this colorful place. Maybe it was the free crunchy cinnamon cookies or the playful banter which accompanied them but we sure felt welcome. Pizza, salad, milkshake, chai latte - all delicious and too much food. Vernon&apos;s Hidden Valley Steakhouse is the only speak easy in New Mexico! We feature exquisite steaks and seafood in a superb dining atmosphere. The culmination of live music, great food and top notch service, as well as the need for "the Password", create an atmosphere and dining experience that surely proves to be one of a kind.

My husband and I went here on a Wednesday night in February just to break out of some winter blues, and we were both pleased with how everything went. First, we enjoyed the "speakeasy" atmosphere as we gave the password and entered the building. The guy who gave us "the rules" stayed in character the whole time and it was fun and set the mood for the restaurant. We had drinks in the lounge first as we were early, and Jose the bartender made sure my husband and I were both happy with our drinks. We moved to the dining room and ordered dinner. I had the French onion soup and it was, hands down, the best French onion soup I've ever had. (And I order it regularly when we eat out.) I also had the prime rib, mashed potatoes, sauteed mushrooms, and the side of the night was broccoli. Absolutely everything was amazing, even the broccoli! We were impressed with the flavor of each item. The staff was attentive, but not intrusive. Our waitress was friendly and professional, and she made sure our orders were right and checked with us to make sure we were satisfied. The restaurant itself has very tasteful decor and atmosphere with dark tablecloths and candles. Both the lounge and the eating areas were dimly but adequately lit, keeping in character with the "speakeasy" nature of the place. It is unique in that you feel "hidden away" from the rest of Albuquerque in this secret location. It is pricey, but I think it's worth experiencing at least once. 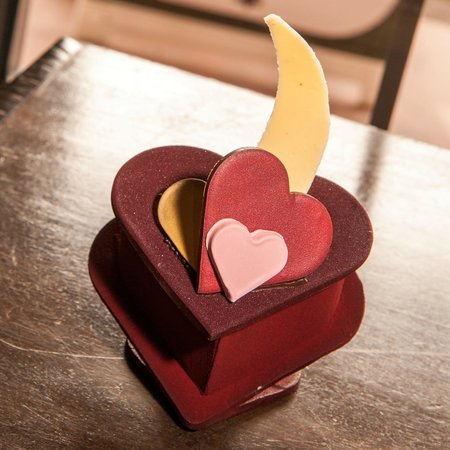 Albuquerque, don't let this place go....I first tried their truffles at Cashmere Chocolate in Taos....I didn't realize the truffles were made by Grace! I stopped in on a whim...the corner shop on North Fourth across from Prime. What luck! What joy! The owner's are lovely people, Grace and another gal have me a sample of their curry coconut truffle filling....oohhh, so subtly delicious! Can't wait to go back...I aim to try each latte..home made syrups..coconut mango, here I come!! 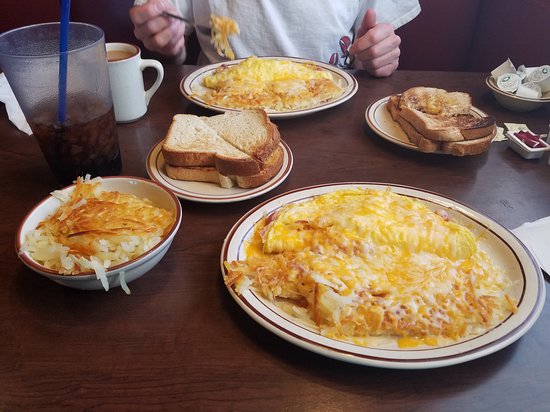 We stopped in a Weck's for a quick breakfast. It was a Sunday morning and very busy, mostly families. I recommend getting here before church lets out.

Most of their menu is built around hash browns. But they also have the usual other stuff. Their goal is to fill you up and so the portions are pretty huge. I saw the pancakes at the next table and it seemed like one person would have trouble eating that volume of food.

I had one of their breakfast bowls. Mostly hashbrowns, mixed with sausage ham and bacon, with chili and a fried egg on top. It was really good and very filling.

Staff was quick. Everybody was friendly. The food was delicious. Definitely worth a trip. 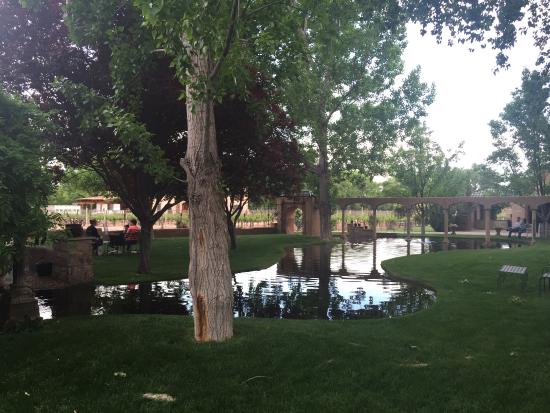 Over priced wine for New Mexico, service is marginal, server seemed more interested in stuffing his face than attending to customers. Property needs maintenance, you would think they would take more pride in the property, especially with what they charge for the wine. Unique property, give it a D+.

There&apos;s a lot to love about Blak&apos;s Lotaburger & and people have been loving our LOTA Burgers, and more, since 1952. In fact, ask anyone who has ever tried a LOTA Burger what makes it so special & and you&apos;re sure to get a LOTA excited descriptions of our juicy, seared to perfection burgers, our expertly seasoned fries, our always-hitting-the-spot shakes and, of course, our world-famous, drive-for-miles just-to-get, Green Chile Cheeseburgers featuring our special Hatch Green Chile, packaged just for us & and just for you.

Fast food cooked to order. Great selection of toppings esp if you want chilies! The corn dogs are so perfect you might think you were at a state fair. Do not forget one of their hand made milk shakes. Plenty to love about Blakes either drive thru or eat in. 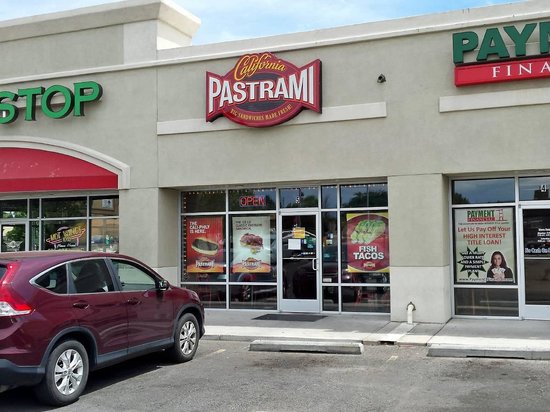 We are a family owned business founded in 2006 at the New Mexico Fair. We worked out of a 8&apos;x16&apos; trailer for 5 years on the street corner in Santa Fe NM for 5 years and also did the State Fair for 5 years. We have been in our current location since January 28 2011. Our Mission is to Delight our customers in a way that creates loyalty. Our vision it to become a national franchise where as one day where we will be found in all major cities across the country. Our purpose is to provide exceptional service to every customer and provide a safe and enriching place to work to help our team reach their personal goals and dreams in life.

Service was outstanding, food was prepared perfectly, the restaurant was clean, and the food is predictably excellent. Prices are fair and modifications to any order are welcome. The freshly made lemonade is Amazing! I love the chips and the fries are perfect. The rye bread is made fresh daily and is truly delicious! When Russian historian, Andre Zubov (4 months my senior), spoke those words when commenting upon Russia's confiscation of Ukraine and the Crimea a few years ago, he may never have thought his instruction to us all would someday be applied in a restaurant review. But, in this case, I consider its application both generalizable and well deserved. The food served up at Thai Vegan in Albuquerque presents the simultaneously simple & complex taste of Thai cuisine in all its glory. While you will not find Nirvana in this food, you will find truth in the taste produced from quality ingredients and acculturated skill in cooking. Similar to the final exams of the great culinary institutes of Europe requiring their students to produce an exquisite 'onion soup' to graduate, Thai Vegan's chef produces an exquisite green (hot), red (mild), and yellow (medium) curry accompanied by mixed vegetables and steamed rice on a daily basis. Those curries are the staple tastes of their business. And, they do not disappoint. I had the yellow curry with Tofu added to mix. During the hour in the restaurant, the aromas invaded my olfactory canals, and, the tastes bordered on the sublime. The 'Vegan' in the house's title translates here to the fact that options of vegan shrimp, vegan chicken, and vegan pork, all made from soy, are on offer as extras to nearly any dish on the menu. And, glancing around the room at what other patrons had ordered, the looks on the faces were those of very satisfied customers - most probably returnees. Thai Vegan gets an enthusiastic thumbs up from this patron. I'll be back! 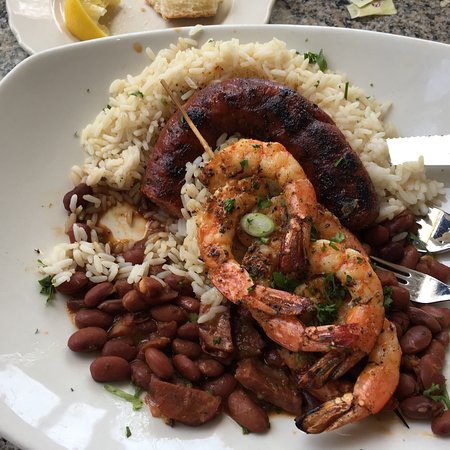 Happy Hour time can be a blast with friends. But, what if your solo? I was on me own (waiting for someone to finish her girlfriend party nearby). I decided to frequent the bar at Pappadeaux. When I arrived at 5:30 pm the bar was pretty much empty. A warm welcome greeted me. Soon the bar filled up. I had lively conversations with the bartenders and new friendly strangers sitting next to me. But, the star was the “Happy Hour” boiled shrimp (8 large succulent shrimp in a nice slightly hot sauce), with a boiled skin on small potato and a half a cob of corn. The food was delicious and more than hit the spot. Washing it down with a pint of La Cumbre Beer. My initial loneliness, turned into a very fun time. I now have an excellent solo party spot..:). Thanks Pappadeaux. And thank you for reading. Avram 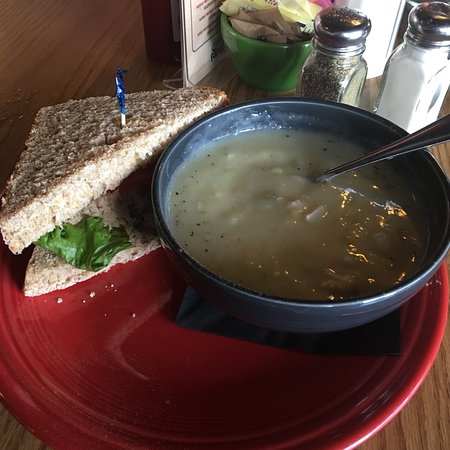 My husband and I came here for breakfast, second time in a couple years. (We aren’t from here). Once again we had a delicious breakfast with expanded options from the first time. He had fruit w/house made granola & yogurt, bacon in the side. He said it was absolutely perfect: granola was fresh & delicious, & the Bacon was some of the best he’s ever had.
I had the blue corn pancakes with blueberries and pine nuts—-original and filling, very good. They also had a great looking quinoa bowl simmered in almond milk with fruit for vegans. And if course, huevos rancheros & other classic SW dishes. Recommended. We will be back.