Letterkenny (Irish: Leitir Ceanainn, meaning "hillside of the O'Cannons"), nicknamed "the Cathedral Town", is the largest and most populous town in County Donegal, Ireland. It lies on the River Swilly in east Donegal and has a population of 19,274. Along with the nearby city of Derry, Letterkenny is considered a regional economic gateway. Letterkenny acts as an urban gateway to the Tír Chonaill Gaeltacht, similar to Galway's relationship to the Connemara Gaeltacht.
Things to do in Letterkenny

THE YELLOW PEPPER ENJOYS THE ULTIMATE CUSTOMERS APPROVAL ITS ALWAYS BUSY. THE RESTAURNT WAS REFURBISHED in 2009 AFTER A REALLY BAD FIRE. IS LOCATED ON THE MAIN STREET CLOSE TO MANY BARS.THE FOOD IS CONTEMPERY WITH A GREAT EMPHAISE ON LOCAL PRODUCE FROM THE OWNERS GARDEN.

We chose this restaurant based on the Tripadvisor reviews and the options available for vegetarians. Very handy location on the main street, not far from the Station House Hotel where we were staying.
Despite it being a Tuesday night, there were at least 8 tables occupied. Beautiful decor and very cosy, lighting was low but perfect and added to the atmosphere. THe menu had alot of variety. I asked if there were any types of onions (red, white, spring etc.) in the Portobello mushroom burger dish when I was ordering and was guaranteed that there were none in the dish. Unfortunately when it came it did but I just scraped off the part with onions and ate around what I could, not wanting to cause a fuss. When the plate was collected, she asked what was wrong and why I didn't eat everything (a strange way to phrase it!). She then told me that there were spring onions in it! But she made me feel like I was being awkward despite the fact I had asked very nicely before ordering, and not made any sort of scene. I'm sure based on the reviews, this kind of thing rarely happens. I would still recommend this place though based on the menu choices, location and decor.

2. The Brewery Bar and Restaurant 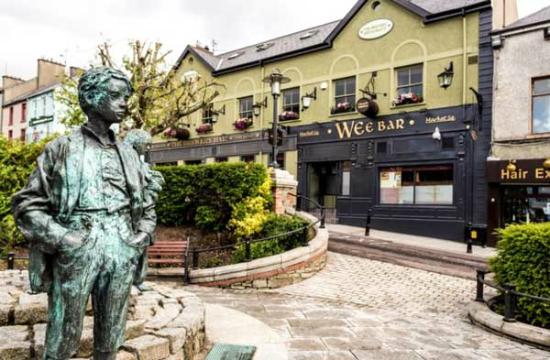 The Brewery Bar and Restaurant is conveniently located in the heart of Letterkenny, Co. Donegal. Food is served all day, including lunch, Bar Food, and a la Carte. You can choose to dine in our cosy lounge with open fire, or our upstairs restaurant. We also have a full bar licence, wines by the glass, and an ever expanding craft beer list. Chef specials change on a weekly basis. Booking recommended for the restaurant.

Food is great and portions are huge, with stuff to please adults and kids alike. The atmosphere is relaxed and the staff are friendly. It gets busy, so don't plan it if in a rush, but if you've the time, it's worth it.

3. Pats on the Square 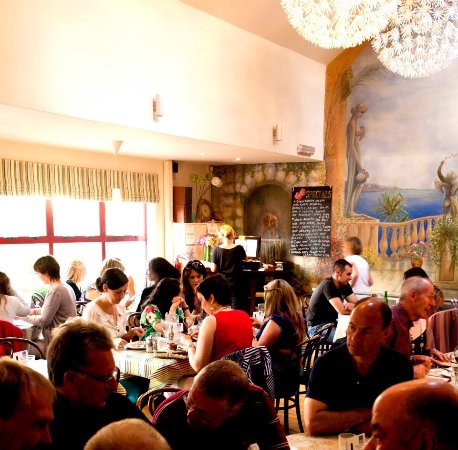 We are in the Market square, right in the centre of town, half way down the main street. We are a 50 seater restaurant, recently renovated. The kitchen and foyer are downstairs and the restaurant is upstairs. We are a bistro style establishment, we serve pizza, pasta, steak, fish, chicken and salads. Our emphasis is on fresh, local and organic where possible. We have been in the same building for 30 years and are family run.

The food was excellent! We had the green salad side, the risotto and the Pasta Favourita (chicken, bacon, and an amazing garlic cream sauce), with Apple crumble. As a passionate fan of Apple crumble this has to be some of the top 3 I've ever...MoreThanks a million for your review, the pasta favourita is well named as it’s definitely a best seller. Hope to see you again soon ( in the meantime I’ll try to chill out those waiters ?) Mary. 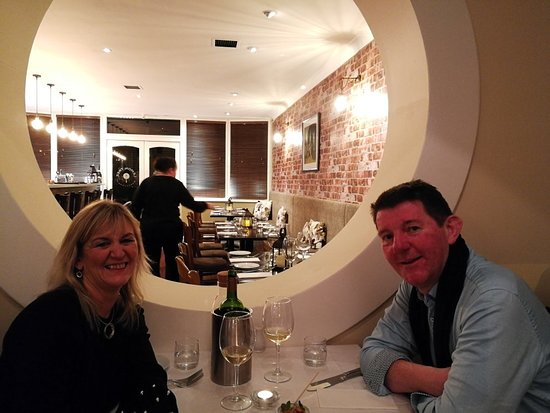 The Lemon tree has recently moved MAY 2017 to a NEW location in Letterkenny at the Courtyard Shopping Centre to the rare of the building at the carpark. This is a Letterkenny owned family run restaurant opened in 1999. The three brothers in the kitchen have a unique style with a mixture of traditional Irish and French classic, influenced by country house cooking which was collected by their many years experience all over Irleand. All meats are Irish sourced and fresh fish is a special feature. Everthing is made freshly on site including all breads, pastries, pastas and desserts. The Wine list is ever growing and includes something for all tastes with over 90 different wines. The restaurant offers a Early bird menu 7 days available from 5 - 7 pm and a full A la carte menu from 5 - 10 PM. Lunch is available from 1 - 2:30 PM on Sunday.

Chose this restaurant on my visit to Letterkenny because of its high TripAdvisor ratings and I was not disappointed. Arrived at 7pm and ordered from the early bird menu; I had chicken and my boyfriend had steak, both were absolutely beautiful.
The ambience of the restaurant was just stunning. Beautiful setting, tables far enough away from each other that you do not feel like you are dining with other guests, the toilets were so clean you could literally put a table in there and eat!
Will definitely eat here again when I come back to beautiful Letterkenny and have recommended to anyone staying in the town. Gorgeous place. 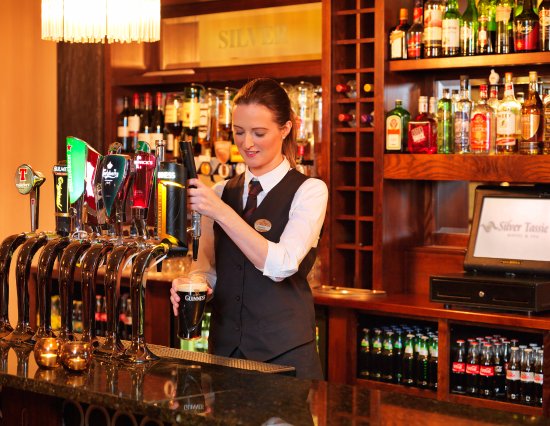 A Word from our Head Chef Hi, my name is Karl Murtagh and I am the Head Chef at the The Silver Tassie Hotel with over 20 years experience satisfying the taste buds. Together with a dedicated and hard working team, my aim is to ensure all our customers enjoy a superb dining experience in the Hotel. The Silver Tassie Hotel has established itself as one of the town&apos;s most reliable establishments for good food and quality hospitality using only using the freshest ingredients in all our dishes. We take great pride in our food, as it is all freshly made on the site by our highly skilled and creative culinary staff. All our food is sourced locally and where possible using sustainable produces, all of our meats, fish and vegetable have full traceability. We have carefully planned our menus to ensure there is something to cater for all tastes with a great emphasis on fresh seafood and locally sourced meat with our "Tassie Steaks" our specialty dishes. Our Sunday Carvery Lunch is an experience not to miss out on with 5 courses to be enjoyed during a pleasant afternoon of dining. Children in your party can enjoy our Kiddies corner to make the day out relaxing and fun for all the family. Eating should be an experience, which is why we taken great care to ensure the restaurant is the epitome of comfort, wood paneled walls, crisp white linen table cloths, a large stone fireplace and sumptuous leather chairs ensure that the whole dining experience is a comfortable and memorable one. Your dining experience is strongly supported by friendly, attentive, and helpful staff who ensure you have everything you need, all you have to do it sit back, enjoy, indulgence and let us delight you! I look forward to welcoming you to The Silver Tassie Hotel and attending to your culinary needs and desires during your stay at the Hotel. Karl Murtagh

Me my mum,dad and my two brothers went here for a quick dinner because one was going back to Dublin so we went here and we all ordered and we waited 2h for our food and it never came later on we complained and one of the staff asked "where are you from?"So I wouldn't recommend the place for a quick bite of food. 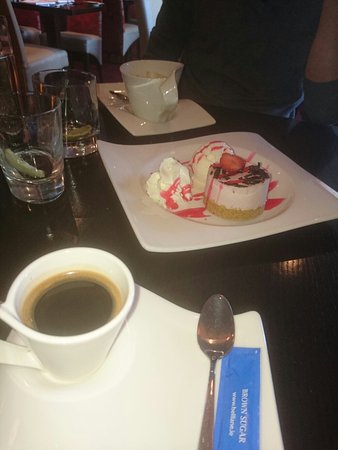 For those of you who love your Indian food this restaurant does a Sunday lunch for €13.50 with a lovely starter and Main with a good choice, rice included, ice cream and then a coffee. Really good value and having been there a few times for Sunday lunch I’m amazed it’s not busier... 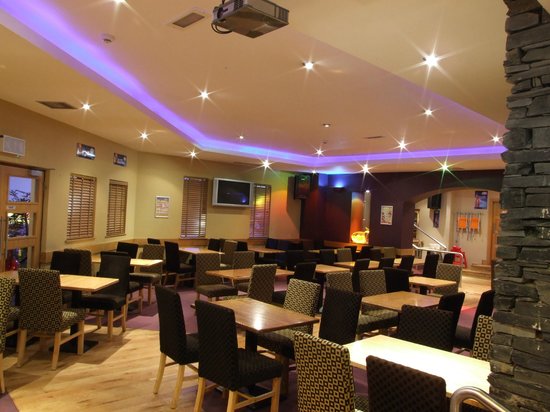 Took the Grandchildren there last Saturday afternoon. Initially went bowling which was win win for fun and excitement. Then into the restaurant for a meal. This was superb. Satisfying young children with several.choices of meal. Another win win. 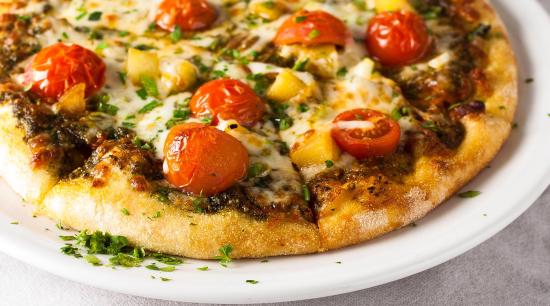 We were staying at McGettigans hotel and this is right beside it. We had ate in the hotel the night before but just wanted something a bit more casual. We ordered 2 x 12inch pizzas, large chips, garlic bread, 2 drinks and 2 dips. It...MoreThanks a million. Pat. 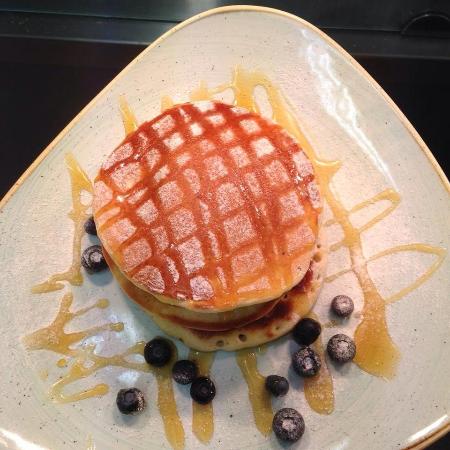 The Butterrock restaurant is situated on Dungloe’s main street & is the perfect place to head for a cup of hot tea or coffee, a mouth-wateringly delicious slice of homemade apple pie, a lunch of freshly breaded haddock, a soup & Sandwich. The list goes onThe Butterrock is an extremely comfortable haven to while away the hours, known far and wide for our abundance of charm and friendly staff.We are renowned for our fresh haddock and locally sourced seafood chowder. But with a full menu of daily specials, a variety of soups, salads and sandwiches for the indecisive, it&apos;s hard to decide what dish to opt for, too many delectable options!!. We look forward to serving you!

Busy little restaurant, conveniently situated on the main street across from a large car park, offering a wide range of food but sadly not catering for all allergy suffers. Enjoyed my coffee and tray bake. The manager and staff were all pleasant, helpful and friendly. Reasonably priced food. 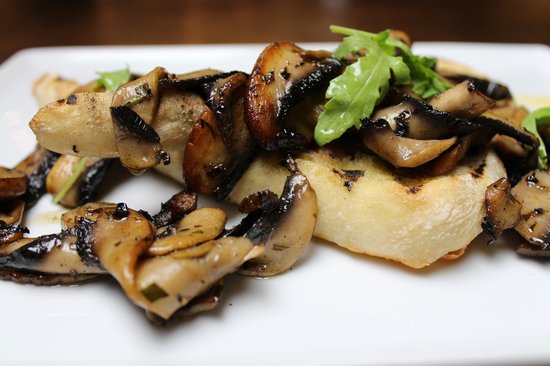 Myself and three of my college friends where in Oasis before Christmas. We ordered food from ''Holly'' who had a seriously bad attitude and inexperienced! We waited almost 40mins on food and noticed other tables that ordered after us were getting their food sooner. One of the girls asked her nicely ''Was our food coming soon'' and she replied by rolling her eyes and in a terrible tone saying 'aww ill check''. She went to one of the other ''friendlier'' waiters and he went to check for us and had the food out soon after. Throughout our time there Holly went past several times and never came back and asked was everything ok instead gave unnecessary facial expressions. My friend went up to the woman in charge just to make her aware of this and she basically said we were lying and that her staff would never be like this. I strongly advice the lady in charge to start Reading some of these reviews regarding herself and her staff as we cant all be wrong !