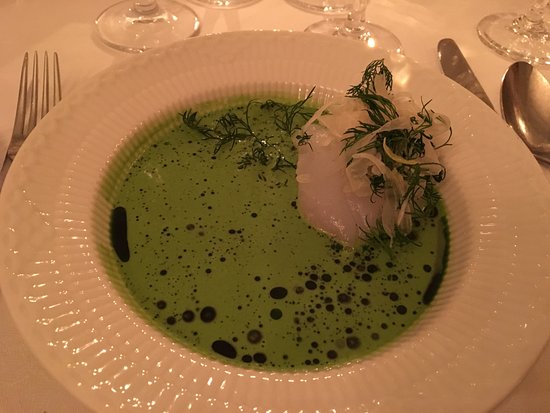 Located approximately thirty minutes outside of Copenhagen by car, an additional forty for those using a combination of Public Transportation and foot, Søllerød Kro is said by many to be one of Scandinavia’s very best Restaurants, the “White Guide” recently awarding it a top 5 position behind the likes of Michelin 3* Geranium and Maaemo in Oslo.
Described as “French Cuisine” using local ingredients, though recent reports of Chef Brian Mark Hansen’s cooking suggest an increasing element of New Nordic influence, Søllerød Kro is located inside of a 1677 Inn in the middle of a forest, the walk from the bus stop a pleasant one that takes no more than 15 minutes at a steady pace, though most guests during this particular meal appeared to be nearby locals or folks who made the drive from Copenhagen.
Awarded one Michelin Star since 2007 but with a lengthy history, part of that being a Sunday lunch tradition of opening up the space to families and kids of all ages, it was just prior to 11:45am that the first guests arrived at the lengthy white building in Holte, the early moments everything that fine dining should be with “Yes Sir and Yes Ma’am” aplenty and Champagne flowing, though what followed would probably be best described as a few steps above dining at one of the McDonald’s locations with an indoor playground.
For many a special event sort of Restaurant, the menu divided into a bargain Lunch and two Tasting menus, the Søllerød Signatur and Søllerød Inspiration at DKK1795 and 875, respectively, it seemed only appropriate as a first time visitor to place trust in the items on which the restaurant established itself, a Wine list said to be one of the best in all of Europe passed on in favor of one of Alain Milliat’s new Nectars, the pasteurized Cabernet Grape expressive and brisk in a way that pairs well with everything, though obviously a bit sweeter and less complex than serious oenophiles would appreciate.

Listed as an eight course menu, but in reality double that when accounting for several canapés, amuses, palate cleansers and mignardises along the way, it was just before the restaurant started to fill that things got started, a plastic ‘egg’ filled with boiled Potatoes, Summer Truffles and Bread Crumbs rich and creamy while the Asparagus in smoked Cream was a lot like that at AOC the night before, the small morsel of cured Duck around Prune a tasty balance of sweet and salty while the Apple compressed in Lemon Verbena was a refreshing single bite to refresh the palate for flavors to arrive next.
Offering what would turn out to be one of Denmark’s best Bread services at a pace best defined as brisk, a new Roll of either type delivered warm just as soon as the last bite of its predecessor was gone, it was with anything but a French classic that an amuse arrived featuring Watercress Ice Cream and immature Strawberries in a cold soup flavored with Parsley, the “Oscietra Unika En Surprise” that followed described as a Søllerød Kro ‘signature’ but in reality quite similar to something anyone who has dined at Joel Robuchon has experienced with a thin layer of sustainable Caviar stacked on Asparagus Gel and diced Razor Clams alongside a Horseradish Crisp.
Following up Caviar with more Caviar, the grilled Oyster topped in salty black Eggs specially produced for the Restaurant seemingly an odd decision to reuse a flavor profile so early on, course three was unfortunately a case of unnecessary ‘modernism’ creeping into the dining room, the nitrogen frozen Horseradish liberally added to a disc of Scallops topped in both Ginger and Grapefuit presenting a flavor so bitter and cutting that Hansen may as well have been serving Ground Chuck beneath it because no one would have noticed the difference.
Returning all but one bite of the dish to the kitchen, not one question or mention of it from the staff aside from “all finished?,” it was finally here that flavors got more interesting, the Lobster Tail served beneath softened Cabbage and Curry Foam infused with Thai Basil fairly spicy by Danish standards and yet another case of Chef Robuchon’s influence while the Foie Gras Torchon was a pleasant yet standard preparation putting the creamy quarter-hockey puck beneath Kumquat Jam and Dark Chocolate Crisps.
Clearly a restaurant dependent on using luxury ingredients to wow guests, a bronzed ounce of Turbot seared with Bear’s Garlic served next to a gelatin layer of Black Garlic atop Broad Beans coming next, savories finished with a slightly overcooked Loin of wild-shot Deer marinated in Black Pepper Reduction, the flavorless Summer Truffles served as a shredded cloud atop Cabbage more interesting as a texture than a taste beneath foamy Hollandaise.
Cleansing the palate with a warm cup of Lemon-Ginger Tea and a Macaron of complimentary flavor, a harmless little duo that arrived around 14h30 as several Danish children had long since been chasing up and down the aisles unrestrained by oblivious parents, Dessert one again took a post-noma turn by presenting halved-Cherries atop an Almond Caked next to a quenelle of fresh Woodruff Ice Cream, 2/3 of the Mignardises again featuring ingredients served no more than two courses prior while the Mango Popsicle intended to be dipped in White Chocolate was a fairly clumsy presentation that really did not seem to fit the meal’s concept. 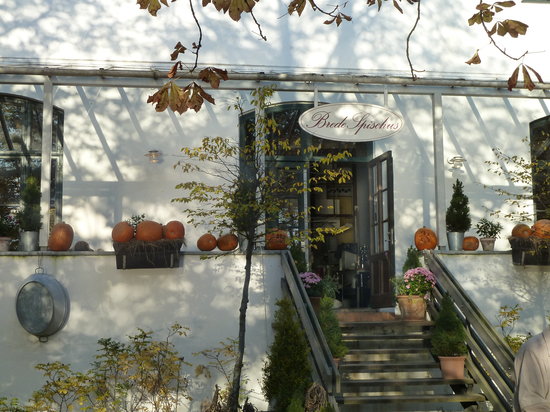 In a former factory building, this restaurant offers all what one hopes to get when eating/dining out:
- warm, classy, elegant, timeless atmosphere
- excellent, friendly and attentive service
- excellent food offering traditional danish dishes but also French cuisine
- good wine card
.. last but not least a very kids friendly attitude
Too bad it's far away from home .. I'd be here very often! 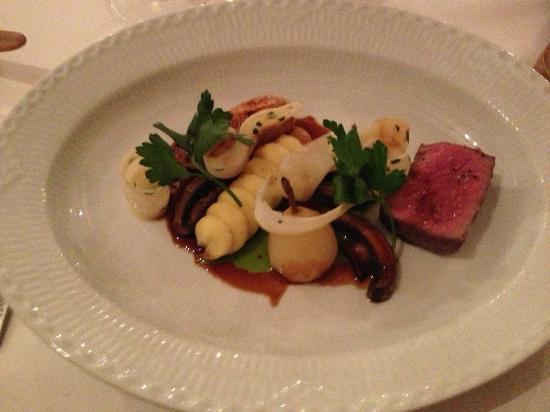 At the 150-year-old Raadvad Kro, hosts Peter and Rikke welcome guests in an idyllic pocket in the middle of the beautiful Jaegersborg Skovdistrikt - right next to Dyrehaven, only 15 minutes north of Copenhagen. The menu is inspired by the nature surrounding the restaurant, and strikes a fine balance between modern and classic cuisine. The well-stocked wine list is mainly focused on French classics, but a cold beer is also a popular choice for lunch. Raadvad Kro is an ideal setting for a nice dinner, family occasion, or any other arrangement, in beautiful natural surroundings a very short distance from Copenhagen.

I the former industrial area of the city, full of old factories and water reservoirs, sits this amazing place.. I have rarely seen a more elegant, classy place. Food is good but service is not matching the aspirations of the place .. indeed one has the impression that savings were made on the quality / experience of waiters (forgot most of the time what we ordered .. a bit weird ..)
Prices are pretty high
All in all a great place.. could do better though 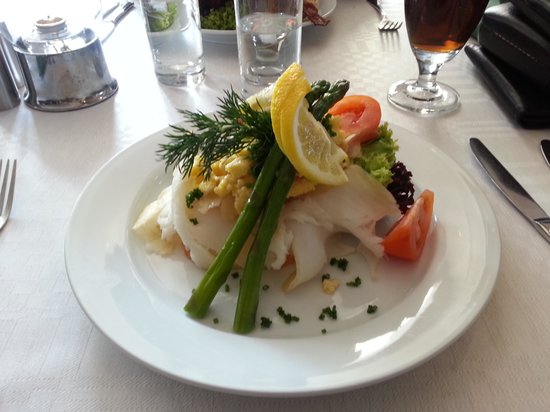 This place close the lakes call for a warm summers day. Today it was overcast...and the chef was not shining either. I had the "Kroplatte" my colleague had the "måneskud" (moonshot) a variant of the "stjerneskud". The food was adequate, the battered fish was OK, as was the meat. The bread was boring and the butter served ice cold. The cheese was served as a messy pile. The sparkling water - did not have much sparkle....just like the moonshot. 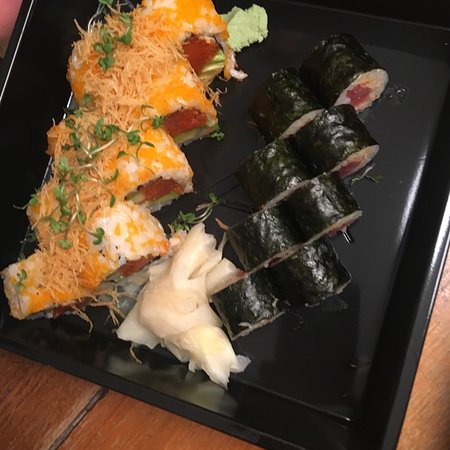 If you pass Kongens Lyngby north of Copenhagen, it is a very good shopping area, you should try Sticks & Sushi in the corner of Magasin du Nord. NOT far from Lyngby Hovedgade.
Sticks&Sushi serve japanese food it is delicious, healthy food, food you don't get anywhere else. You Can get salats from under 50kr.but you Can also spend 300-400kr per person. Tatar with caviar. Fantastic. 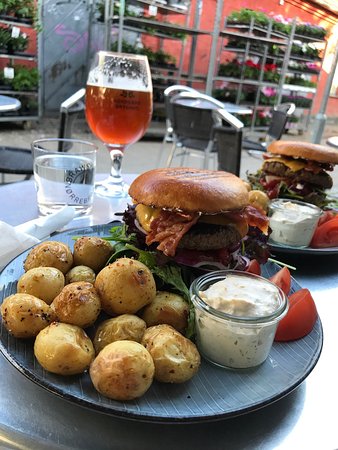 A very nice and central place in Lyngby to meet with friends. Great sandwiches of good quality. I had the tuna with dark rye bread, very satisfying. Super nice with drinks such as Carrot, apple and ginger juice - yummi.
Coffee was also very nice. For sure a place where I will go again, also with my husband. 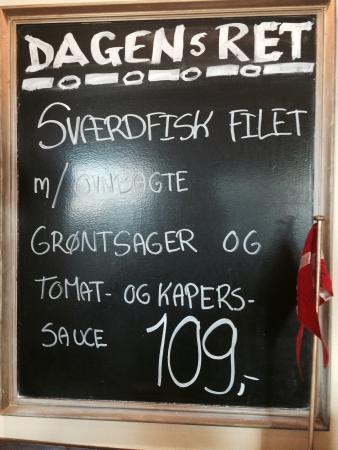 Staff very helpful and friendly. Nice ambience, outside, inside or garden Seating. Food average. A person on the next table chain smoked and we got lungfuls of her smoke. It seems that Copenhagen do not have the no smoking in restaurants and public places that we enjoy in Australia which does rather spoil eating out experiences. Excellent value for money provided by the running sushi menu.The sushi conveyor was continuiously topped up with freshly prepared dishes.Friendly and reasonably efficient service. It all looked nice enough but compared with the (more expensive) local competition I found it a bit bland. Similarly the sticks were nothing special. 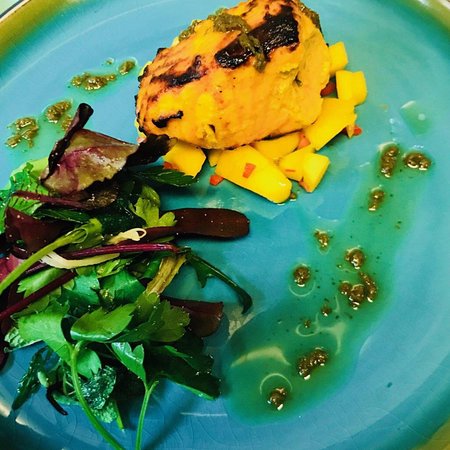 Like other reviewers, this is my second time back and I was just as impressed.
Tucked away around the corner you probably wouldn't stumble upon this restaurant but it's well worth the visit. The food, service and ambience are all very good.
I'm from the UK where there is a good choice of restaurants and this compares very favourably even though there's not so much choice.
This is an upmarket, enjoyable experience - you won't be disappointed. 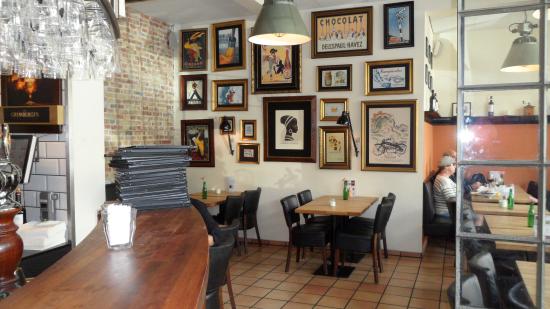 Friendly staff, good portion sizes and hearty food all at a good price. Although I was eating alone (on a business trip) I enjoyed the atmosphere in a fairly busy Thursday evening