Top Things to do in Katelios

Markopoulo (Greek: Μαρκόπουλο) is a village and a community in the southeastern part of the island of Cephalonia, Greece. It is situated at the southeastern foot of Mount Ainos, at about 250 m elevation. The community consists of the villages Markopoulo (population 85 in 2011), Kateleios (pop. 36) and the beach village Kato Kateleios (pop. 156). Markopoulo is located 1 km east of Chionata, 2 km west of Kateleios, 2 km northwest of Kato Kateleios, 6 km west of Skala and 9 km southwest of Poros.
Things to do in Katelios 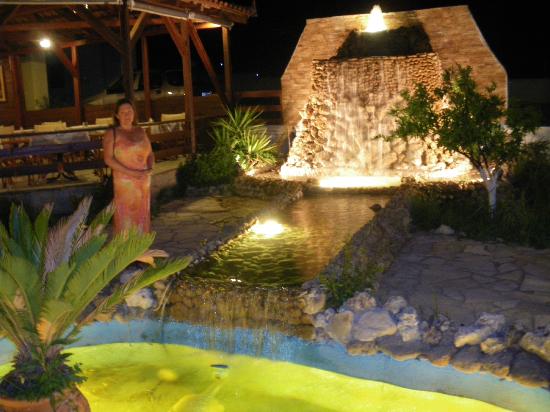 we went here on our first night being closest to were we where staying, my wife had a chicken dish which she said was very good i on the other hand orderd a lamb shank that was tough as old boots it seemed to me that it had been cooked before hand then reheated, nobody ask if everything was ok, Lamb being there national dish you would think your on a safe bet, but not when they are cutting corners, or is it end of season and cant' be bothered.
never went back

Good setting by the sea. Food good especially if you like seafood always have an offer on. Friendly helpful staff. 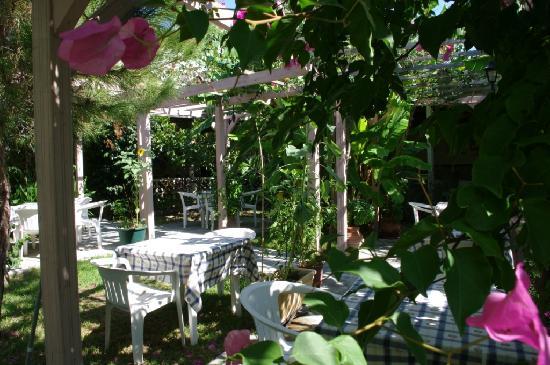 We dined a couple of times here towards the end of our holiday. It was superb and the most authentic in terms of Greek food that we came across.
The staff were very helpful and polite and knowledgable about the food which was delicious!
When we come back to Katelios, we know where we'll be heading! 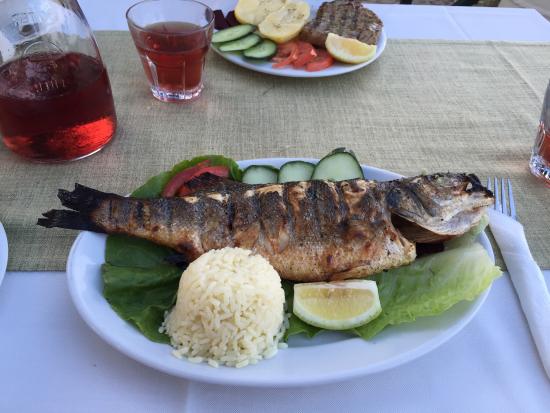 The Lighthouse restaurant since 1998 offers a seasonal menu of Greeek authentic meals, while exploring creative new dishes with weekly specials. All of our dishes are freshly prepared and served. Fresh fish is always available to choose from and eat. Indulge in the delicious Deserts available or a fine glass of wine. With dining available inside and out. The Lighthouse Restaurant is in an ideal location in Katelios for a coffee, wine or meal.

We visited this place several times when we were in Katelios in 2013.
This time we were in Katelios only one week and visited but once since we wanted to try several restaurants.
To my delight the place is still delivering excellent fish plates.
I still rank it as the number 1 fish restaurant in Katelios. Period.
Service is genuinely friendly and prompt.
Location at the entrance to the beach Promenade is optimal.
The sun set scenary delivers a stunning atmosphere.
Choosing fish platter for two you get excellent value for money.
Well yes, they could have boiled the broccoli somewhat more gently, but who honestly cares?
Highly recommended. The Dreams Beach Restaurant Bar is ideally situated by Santa Barbara beach and front of Dreams Apartments. The family restaurant bar offers breakfast, lunch and dinner. As a family we are committed to Greek traditional hospitality and food. This means we use only top-quality ingredients prepare simple, traditionally and well. Our vegetables are organic and from our own garden. Our meat and fish are all sourced locally. And we offer delicious locally produced wine!

Once again we can not fault Katelios and the surrounding area, Dreams beach bar and associated apartments are wonderful, the food and friendliness are second to none, the location is ideal, right on the beach, although there are sunbeds to use around the restaurant if required, free of charge if eating there. They have local produce from garden and all the food is cooked to order, very reasonable and they can't make you feel more welcome, very worth a visit or stay.
Please note I cant quote on wheelchair access as there is a dirt track walk to bar although pretty flat and access to area seemed adequate for wheelchairs. 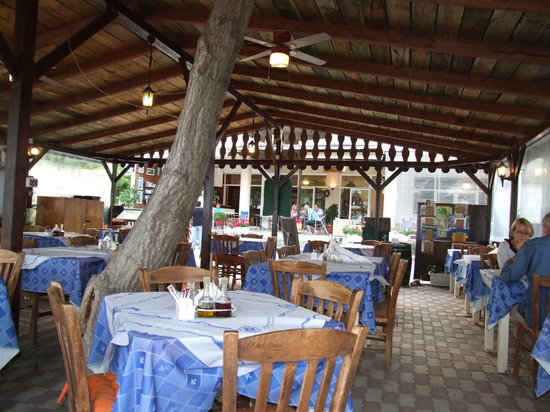 For a warm welcome, good food and being made to feel more than just a number you can&apos;t beat this place, if you are in Katelios you must pay Sadie and Illias a vis.

The staff made this taverna for us. We visited on 4 nights of our 7 night holiday. The English lady was fantastic, happily changing items on the menu for us when we wanted something slightly different. We had one meal we weren't keen on but that was down to it not being to our taste rather than anything wrong with the quality.
My 2 year old son was quite taken with the young Greek waitress and she was very good with him, making a fuss of him every time she passed, so much so that he demanded we went there for dinner on the last 2 occasions when we might have tried somewhere else!
The childrens menu was limited but for €7 they could have a main and an icecream. We had a starter and two mains, plus childs menu and 1/2 litre of wine for around €30.
Definitely worth a visit. 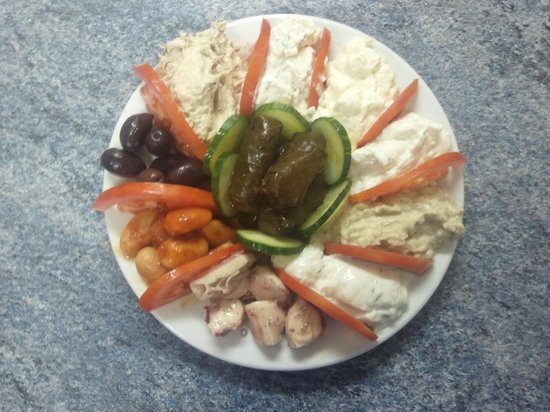 Service was great. Visited for an evening meal. Huge portion of meat but would have liked some/more vegetables. Another reason for not scoring a 5 (not down to taverna owners) was the feeding of cats going on around the tables. I find this really off-putting. 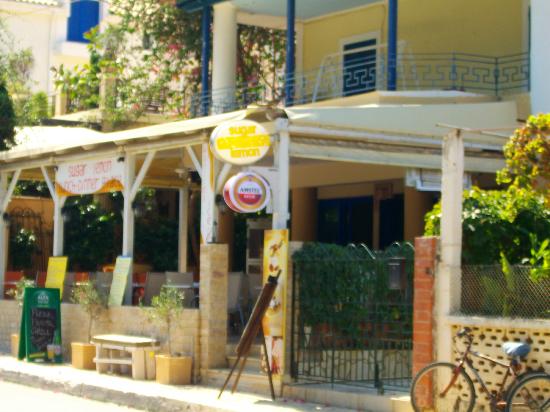 Near the centre of Skala village in Cephalonia, you will find Sugar Lemon. From the morning, Sugar Lemon serves a great variety of different types of breakfast, snacks and coffees in order to start off the day. In midday and evening we serve delicious pizzas, pastas, fresh salads and homemade burgers and await you until the late hours to complete it with waffles, ice-creams, sweets, drinks and cocktails.

Excellent value for money, had the best pizza's in town. All freshly cooked and you are able to see into the kitchen area, very generous portions, a lovely touch after a meal was a quirky little bottle of sangrier. Fantastic service from fantastic staff. Went quite a few times and always good food.
Played lovely vintage cafe chill out music , so you were still able to chat or just chill out at the views. 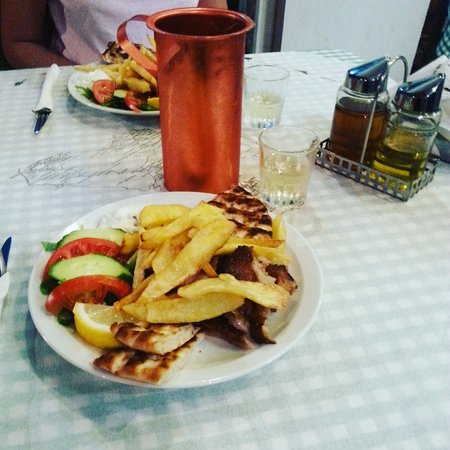 Relaxed atmosphere, open till late for your greek grill or a nice couple of vegitaren dishes.Menu from snack to main meals always freshly cooked as you can see our open kichern.

Found this whilst taking a walk around Katelios. Spot on food, the pork on the spit was delicious. Friendly service. Definitely worth a visit.

We visited this marvellous beach-front restaurant a couple of times during our
week-long stay in Kefalonia. Both times, the restaurant was rather busy, and the service for food was a little slow. However, top tip from us is order a litre of Robola wine, and funnily enough, the waiting time flies by! Ordering a carafe rather than a bottle is deffo cheaper.
Hubby enjoyed the sea bream and pork, lamb and chicken souvlaki. I'm not as adventurous, so I thoroughly enjoyed the mixed souvlaki. For dessert, I enjoyed the tiramisu and hubby had apple pie. My tiramisu was a good portion, but hubby has a large appetite and felt a little underwhelmed with his portion-size. Unfortunately, it was late evening when we ate, so it was too dark for any views. It was still very memorable to listen to the waves lapping and the gentle breeze blowing the night air. Very Shirley Valentine!