Dundalk ( /ˈdʌndɔːk/ DUN-dawk or /ˈdʌndɒk/ DUN-dok) is an unincorporated community and census-designated place in Baltimore County, Maryland, United States. The population was 63,597 at the 2010 census. In 1960 and 1970, Dundalk was the largest unincorporated community in Maryland. It was named after the town of Dundalk, Ireland. Dundalk is considered one of the first inner-ring suburbs of Baltimore.
Things to do in Dundalk 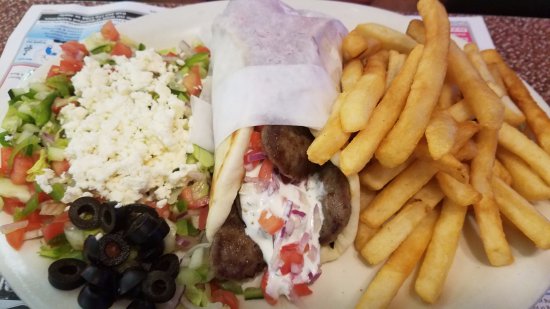 We found out about this place from Triple D and while traveling back to NYC, we decided to stop in. From the outside, you assume it is like any other dine in New York or New Jersey. Decor inside says the same thing. Food however is at a whole different level than what you would get in New York. yes, you can get breakfast and sandwiches and burgers, but you are in the Baltimore vicinity, so why not take advantage for what they are known for but crabs! I had a wonderful lunch at a great value, which included Maryland crab soup, a broiled crabcake, with a side and a chocolate pudding for dessert. My husband, who was in the mood for beef, ordered their meatloaf and pot roast plate (I think it was an Elvis) that included mash potatoes, onion rings with gravy and cheese. The plate was huge and could have been shared by two people easily. In addition, they have very good Greek food. My husband had the grape leaves, which are hot (in NY, they are usually chilled in a diner) and he also had the lemon soup. The service was excellent and friendly. My husband wants to return again if we are ever in the neighborhood. If you live in the area or are travelling north or south of Baltimore, stop by. From I95 it is only 5 to 6 minutes away...well worth detouring and enjoying a great meal! 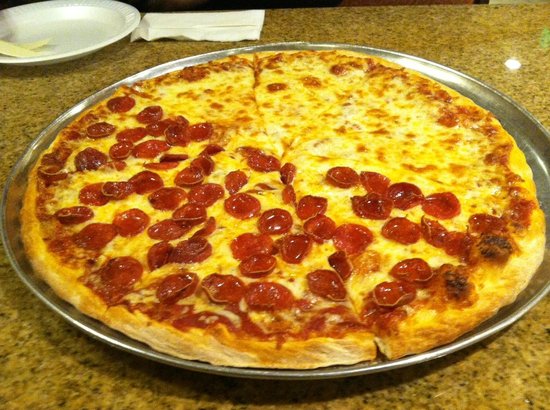 This place never disappoints. The service is always friendly, the food is always fresh and lots of flavor no matter if you get a sub, platter or pizza. The ice cream is awesome. We never hesitate to go back. 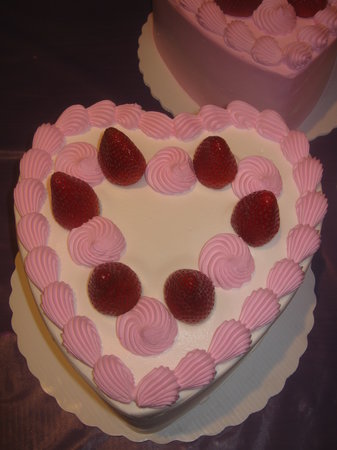 Ok Herman's is pricey for its cakes, you get what you pay for. The strawberry shortcake is one of the best in Baltimore. Grocery store cakes just don't come close. Lots of great choices for birthday cakes. Nice selection of pastries and donuts as well. Staff is very helpful with custom orders. Cakes from Herman's show you know your way around Baltimore. 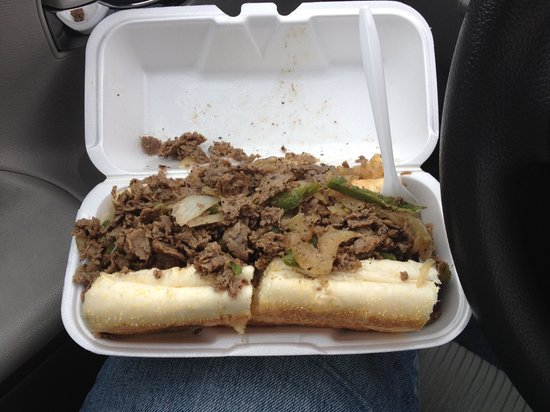 Always give you a lot of steak on their subs and are delicious also. Pizza is also good. Fred, the owner, is a wonderful person and the people working there are very nice. Overall a good place to get subs and pizza. 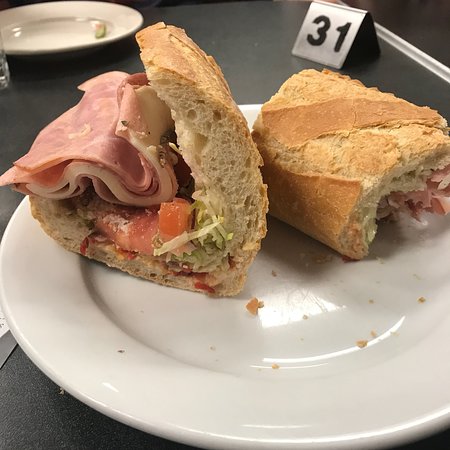 This is a small bustling deli and store that serves us pizza, sandwiches and meats. I'm surprised it's #1 in the city, but I think it was clear when I visited how popular the place is.

Just so everyone knows the system:

1. You go to the counter and order (pizza, sandwich, etc)
2. Then you go to the register line and you pay. There you're given a number.
3. You get seated by the folks there and the number stays on the table.
4. You get your delicious food.

I had the eggplant parm. It was quite good. A small is large enough. The Italian looked delicious as well. 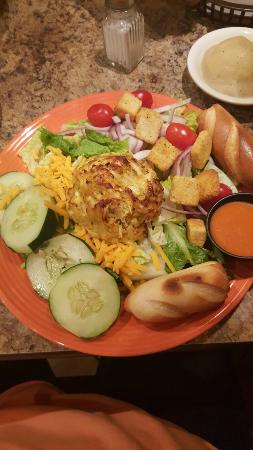 This is a small take-out restaurant with about a dozen tables for sit-down customers.
Generally, the food is good....BUT the Crabcakes are super, fantastic, marvelous !
In Maryland everyone has his favorite crabcake place. Well, this is mine! Seriously, they have both 6 oz and 10 oz (!) crabcakes with lots lump crab meat and the least amount of filler that I've ever had in Maryland. And, the prices are the most reasonable of any other place that serves crabcakes. If you like crabcakes, go ! You won't be disappointed. 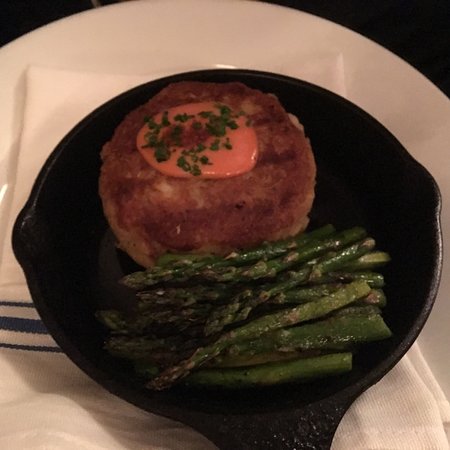 Stopped in on St. Patty's Day afternoon to kill some time before picking up a friend at the airport. Spent 2 relaxing hours at the bar ordering oysters, shrimp, etc. and having a few drafts. Also ordered a salad and burger for dinner. Everything was very good. Relaxed atmosphere with a good bartender. The freshest oysters ever. We had 6 different varieties and all were very good. I will definitely return. This is a new business opening up, its accommodations are modest, but that is ok.
We heard about this place through Yelp and decided to give it a try.
From looking at the paper menu we choose the Carnigie and the Wise Ave Special. They were huge, served with fresh home made chips and a genuine deli pickle. We also wanted the fresh cut fries, but due to a huge demand they were sold out, the regular crinkle cut ff were good. My only complaint was the Wise Ave special boasted rare roast beef, it was nothing beyond med.
Everything was really good, the customer service was super.
Another plus was the Fire Dept was here to enjoy their carryout. They support the Fire Dept, Police, and Military with a 20% discount. Thank you!
We will be back for sure.
Free parking and truly great customer service. This business will take off! 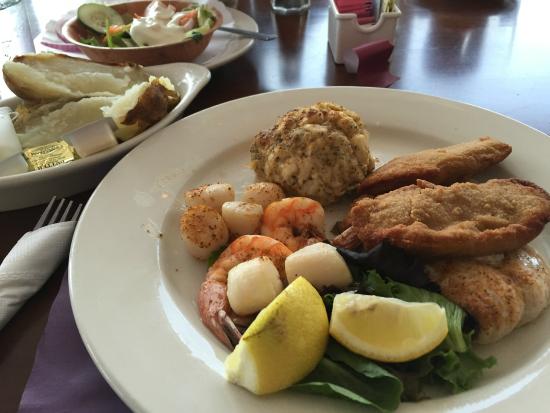 We appreciated the nice website with the menu posted on line so we could plan ahead. We appreciated the convenient parking, the very helpful and pleasant staff, and the variety of seating options, including outside sand level, inside water view and inside large party room seating. The crab cakes were available broiled or fried, had lots of lump crab meat with minimal filler, and were delicious. I got green beans and mashed potatoes for my two sides, and enjoyed them, too. My companion had the all-you-can-eat crab special for about $25, which included soup, and was very happy with the steamed crabs, and with our very attentive and generous waitress. Our table mates appreciated the kids’ playground, too.

I've only been to the Poplar Restaurant three times in the past 30 years and I just don't understand why this place is loved. I was here once in the late 80's, then again maybe 10 years later, and then just recently at a gathering while in town for a funeral. And this time was no different than the last two times. I'm not impressed.

My biggest gripe is that they were not prepared for a larger group. It was only about 15 of us, but that was enough to completely overwhelm the kitchen. It took forever for the food to come out, and it came out in waves of 3 or 4 dishes at a time, so it was as if one or two cooks were only making a couple meals simultaneously. The last person to get his food had to wait 45 minutes from the time the first meal came out. That's just totally unacceptable.

I ordered the bayou chicken pasta dish, and it was pretty good, as was the shrimp salad sandwich my wife ordered. Others in the group liked their food for the most part, but overall it was an average food quality experience, and a terrible service experience. It's barely 3 stars for these reasons. And I don't plan to ever go back unless I'm dragged here again like this last time.