Captain Cook is a census-designated place (CDP) in Hawaiʻi County, Hawaiʻi, in the United States, located in the District of South Kona. The community, within the land division of Kealakekua, is so named because the post office for the area was located in the Captain Cook Coffee Co. during the early 1900s. As of the 2010 census the CDP population was 3,429, up from 3,206 at the 2000 census.
Things to do in Captain Cook Visited for breakfast at the end of March. we arrived at 7.30am and there were people there before us. Had a good breakfast and coffee, the Latte Café and egg benedict and my husband had the vegetable scramble eggs with potato and rye toast, the food was all very good and a superb location, looking down to Captain Cook Bay. Sad to see that the restaurant was up foo sale. Hope the new owners can keep the level of service and food up to what it Is at the moment. Service very good. 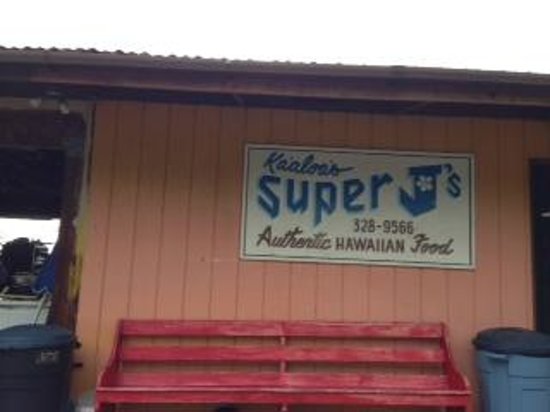 Looking for authentic Hawaiian food and found it here. Laulau pork or chicken, Salmon rice (out of Poi) and Kalua pig and cabbage. Cooked to perfection. I take pride in cooking pork either smoking and grilling, but this was really the best pork I have ever had. Steamed and was so moist and seasoned just right. 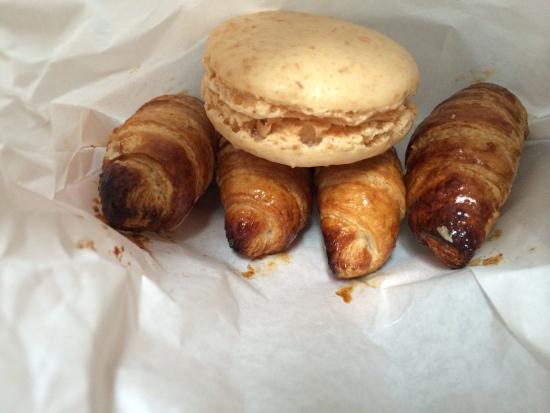 The greatest difficulty you will experience at this gelato shop is deciding which flavors to choose. They let you sample everything and every flavor is so, so good. You have to try the lilikoi— it’s my favorite and I can’t get anything else when I go! 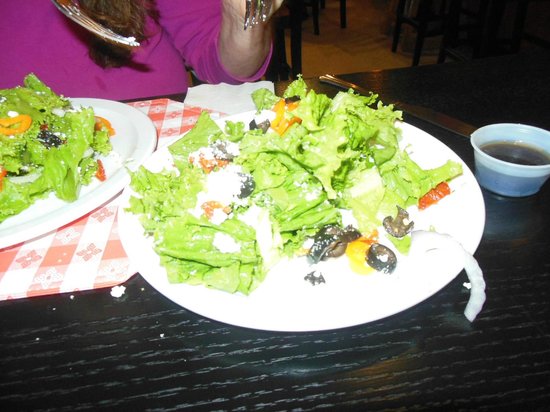 Patz Pies Pizza is committed to sourcing all local produce & ingredients. All entrees are prepared fresh daily from scratch, our staff is dedicated to serving the finest ingredients, and coldest local beer. Don&apos;t forget about our decent wine.

My husband and I stopped for dinner after the Super Bowl. We sat down, but no one welcomed us or took our order. My husband went and ordered at the counter, but other patrons later received table service. Also, once the pizza and salad came, no one came back to check with us. This lack of service was offputting. Still, the Hawaiian pizza was fairly good, and the salad we ordered was delicious and full of what appeared to be local ingredients. The salad was very large. The atmosphere is casual. Several large TVs were on, but when another patron asked for a channel change, he was told that the remote control could not be located. What a wonderful experience our family party of 8 had at this 100 year old restaurant! The ambiance was friendly and informal, the prices reasonable (for Hawaii), and the food traditional and well prepared. This is not the place to come for "nouvelle cuisine" but homestyle, simple Hawaiian food. The "starter" is a group of three sides: traditional tuna mac salad, "long rice" (noodles), and bean sprouts--no choices to make, everyone gets the same thing. I had pan fried Mahi Mahi, which was simple and great. My Dad ordered his favorite dish which almost no one serves any more: liver, bacon and onions--he LOVED it. The ambiance is basic, simple, no fuss; the servers friendly and accommodating, especially to one of our party who is in a wheelchair. Be prepared for a no-frills menu on a chalkboard. Our reservation was at 5:30 so I was able to sneak out the back door for an incredible photo of the sunset (only visible from a few tables inside the restaurant. It was a wonderful experience, enjoyed by everyone from 8 to 80+. 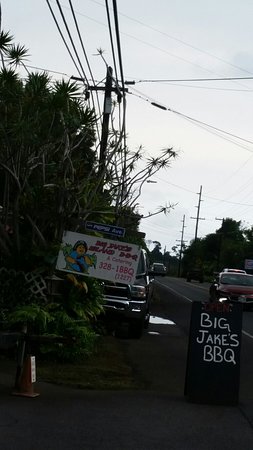 We went to Jakes after a swim at Kealakekua Bay recently and were not disappointed. Well cooked pork ribs with a tasty sauce on the side, along with slaw and beans that were also very flavorful. Very consistent with their cooking technique, as we’ve eaten there about once a month for the last year when we have a craving for ribs and the food has always been very good. We’ve had the brisket and chicken as well, but usually gravitate back to the tried and true ribs. The sides are always fresh. Nice local atmosphere with picnic tables under the awning around the side of the restaurant to eat there, if you can’t wait to eat at home. Jakes aims to please.

Hey my name is Robin. You can call me Big Rob. Big Rob&apos;s is a family owned and operated business bringing home style ono grinds to the South West Big Island! As the sole owner, I have been baking for over 30 years and I take pride and joy in my products. When you enter my shop, you can clearly see it in my work. We serve breakfast ALL DAY! We have: Fresh baked pastries, freshly made bread, local grinds and freshly made fruit smoothies! We also have fresh fish tacos and wonderfully made burgers. There is outdoor seating with an ocean view before 11am and we always have daily specials!

When you eat here you'll notice the difference in the food is with the cook.if Sylvia is cooking order up everything she touches is gold. If Rob is cooking eh....he does better as a baker.We are sorry to hear you feel this way, we strive to make every bite a delicious one. We hope your opinion won't stop you from coming back again. We thank you. 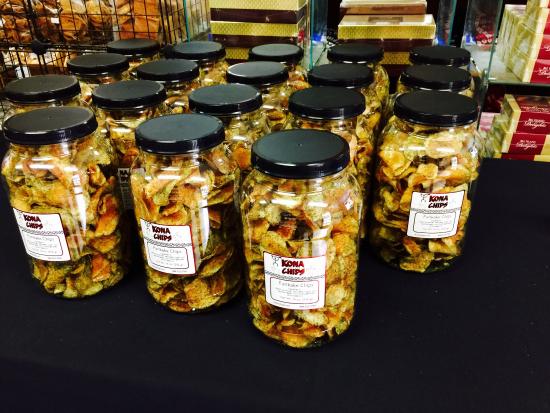 A stone's throw from Manago Hotel you'll find some of the best kettle cooked chips. Sure, you could buy them at the local grocery store, but why not go to the source. These are the most fresh potato chips you'll ever eat....unless you make your own. Not greasy. Just yummy goodness. 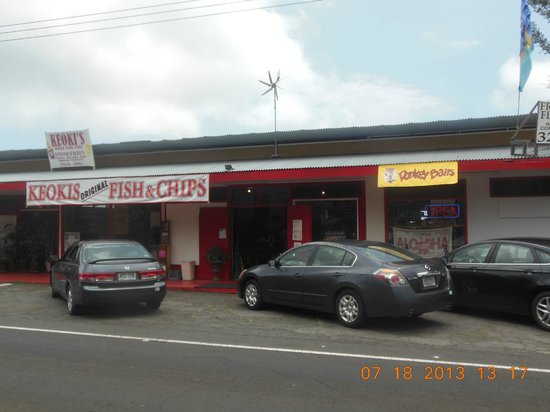 About 24 miles south of Kona International Airport...on Mamalahoa Hwy. Absolutely the BEST fish and chips ANYWHERE. Fresh, light batter, chips are thinly sliced and delicious. We have gone there several times on each of our last 3 vacations to the Big Island. Great little place to stop.

I ordered the ono fish and chips which was very good with generous portions. My wife had the ono tacos which were good but had more vegetables than fish. Service was prompt and the restaurant had outdoor seating which was nice.several gift shops were on the premises. 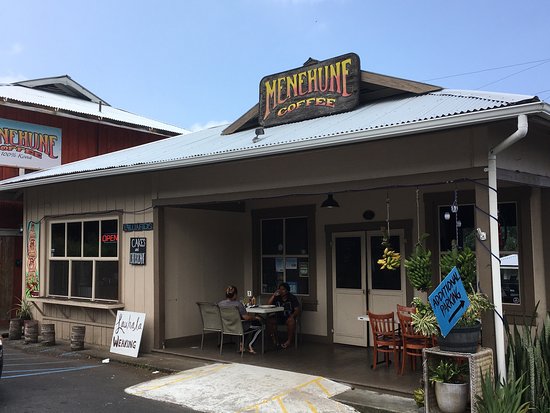 We stopped here for brunch on a long drive around the island. Wow. The adults had an omelet meal. It was so fresh and delicious. I had the Greek omelet with olives, spinach and feta. It was out of this world. It came with a side of grilled potatoes or you could choose fried rice.
The menu is small but includes some fresh muffins and basic bacon and eggs your way meals. The muffins were very good.
Lots of coffee selections. Smoothies.