Top Things to do in Alhama de Granada

Alhama de Granada is a town in the province of Granada, approx. 50 km from the city of Granada. The name is derived from the thermal baths located there, which are called الـحَـمّـة al-hammah in Arabic.
Things to do in Alhama de Granada We stopped in here for a drink around 6 P.M. and were also looking for something to eat. This is a small bar/restaurant right on the Plaza.
The owner told us he didn't serve dinner until 8 PM. We told him we were very hungry and (jokingly) that we would be asleep by 8. He seemed to take pity on us(!) and offered to make us a plate of ham, cheese and tomatoes.
This turned out to be a wonderful meal at a very reasonable price. We ordered beer, wine and "aqua con gas" and he brought us potato chips while we waited (the very best kind served in Spain, quick thick without too much salt). Our plate of ham, cheese and fresh tomatoes was enormous and served with bread, salad (potatoes, cheese, lettuce) and more chips.
Our total bill was 10 euros, which we felt was an incredible bargain as we had two beers, a glass of wine, two bottles of club soda, and the food.
If you happen by here, give it try, The owner is friendly (no English spoken here), the place is very clean, and the food is very good. 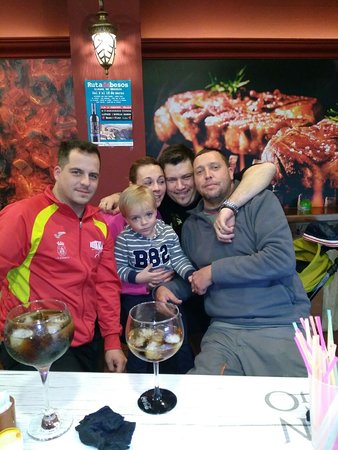 Mesón de Diego reopens its doors with new concept and new direction. It emphasizes its new decoration and new kitchen in which it will be based on the homemade meals typical of the place with a touch of sophistication that will give the diners a combination of good flavors mixed with trend cuisine. Our typical dish of alhoto of fried choto with garlic you can taste it in the Inn of Diego. As a star dish the restaurant specializes in quality meats such as beef, suckling lamb and Iberian pork grilled with charcoal in the sight of the customer. Great variety in the menu where in addition to a complete daily menu for only € 9, they offer in generous dishes a wide assortment like salads, starters, soups, typical stews like pot of Jamaica (cooked from the ground chickpeas) or lentil soup, pasta , Fish, vegetarian food, cheese fondue and a wide range of high quality fast food, not forgetting rations of local products like cheeses, sausages, mushrooms, etc. Homemade desserts will add the finishing touch to the fantastic food. It is committed to quality in every way, even the coffee is 100% natural of the 100% arabica variety of the renowned brand Montecelio, which lovers of good coffee will make your senses vibrate. Great variety of teas and chocolates of flavors. Good wine cellar highlighting local wines such as Aranzada and fresh beer Cruzcampo Glacial.

Alhama is a small village and it is quiet out the night after Carneval. Meson Diego however is open and the friendly staff will let you try the variuos open wines until you taste the one you like. All drinks are served with a home...MoreGracias por su valoración... Le esperamos de nuevo!!! 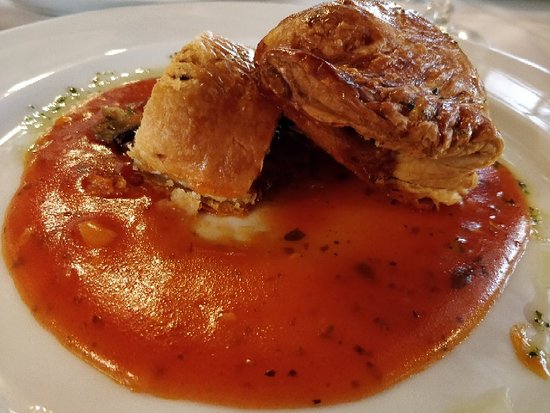 Booked a table here last Sunday & pre ordered the roast lamb for 4 people it was cooked to perfection in the oven with its wonderful gravy, the meat fell from the bone. Served with a local potato dish & mushrooms absolutely delightful!
Our starters were also tasty king Prawns grilled & homemade pate. We had desserts they were nice and several rounds of drinks. The bill was E30 per head which is good value for money in our book.
The restaurant is very spacious & immaculate they had the fire lit it was cosy too. The waiter & waitress who served us were very friendly and helpful thanks for a wonderful dining experience, we will be back soon! 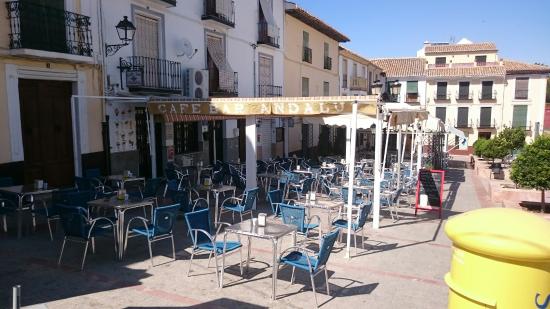 I often visit Bar Andaluz. Juan and his partner are straightforward and friendly and offer similarly straightforward and good value Andalusian cuisine.
Today I went there for breakfast and had my usual tostada with jamon, zumo naranja and coffee. All served quickly with a smile. Juice absolutely freshly squeezed and pleasant coffee. Jamon straightforward pieces on a mashed tomato and oil base. Exactly as is normal hereabouts. 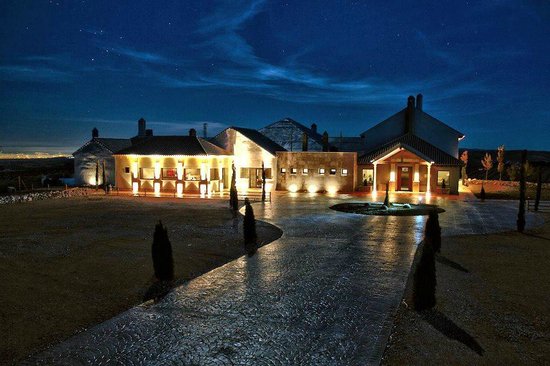 Soto de la Reina is a great restaurant located in the Salar road near Alhama de Granada. Ideal if you like to go for a drive in the countryside, located in km 12. The quality of the food including the tapas is excellent, gourmet standard and their architecture is modern, clean lines with the most fabulous views across a valley. The price you pay is average with an excellent service. It is worth a visit. 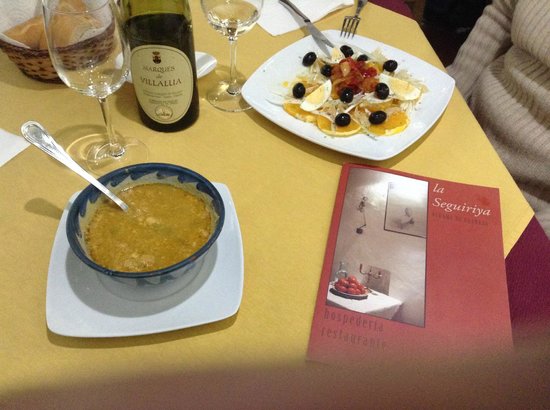 I love visiting Alhama de Granada. It's about a one hour drive from where I stay on the Malaga coast and it's a fantastic and scenic journey. It's a crossroads of Andalucian provinces - half Malaga and half Granada. It's certainly a sleepy sort of place and the best thing you can do is chill out in a bar or go for a walk down the extremely attractive valley.
There are two very good places to eat just outside Alhama but once inside you are restricted to the square or, if you find it open, Le Siguiriya. It is a charming and relaxing hostal/hotel and owned by the former flamenco singer Paco Moyano. He's getting on now but you can see him in his former glory on youtube. Dining on the Terrace of La Seguiriya on a hot day is extremely enjoyable. The views are wonderful and you can eat in the shade. The interior is also very fine.
On to the food and service. Service is chilled and befitting the atmosphere of Alhama. Don't come here if you are impatient or in a rush. The food is extremely tasty Andalucian home style cooking. I'm very happy with that if it works and it does. Paco visits the table and he is a genuinely warm and generous man. He really is happy if you are pleased with your experience. Have a drink afterwards and sit back and enjoy the amazing views.
I have written many reviews on Trip Advisor and I do try to emphasize that a good meal is more than the sum of its parts. I've eaten in Michelin star restaurants that are far less enjoyable than La Seguiriya. On a good day Paco may break into song and I would love to witness that. That is why I love Andalucia and Le Seguiriya.This is the kind of place that exists to help people that live in the crazy modern world realise there is another kind of life. Try to think about that should you visit. 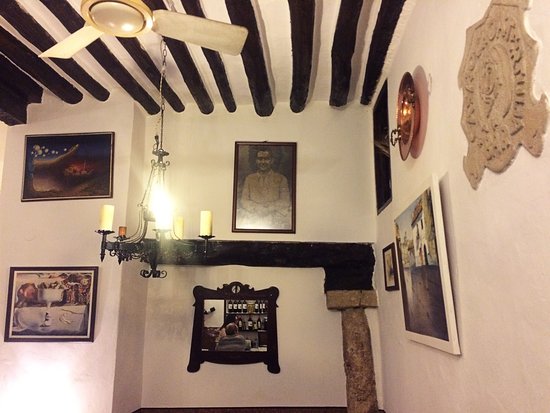 This is a great place to experience traditional Spanish hospitality, the tapas and raciones are really good. One of the few bars that we know that still have brasseros (trays of hot coals) under the table to keep you warm in winter. Excellent friendly service. Open weekends year round and every day in the summer months. 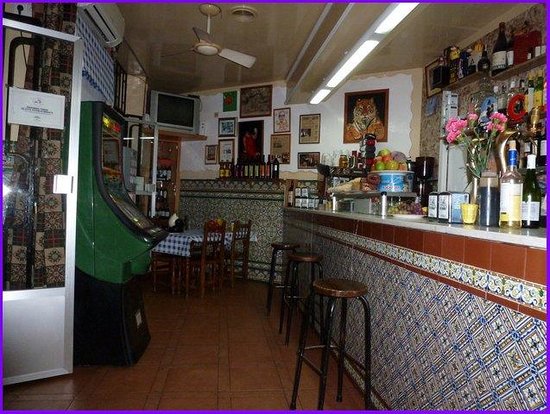 This is a very small bar (2 tables), although there is a further dining area below. There were a few people at the bar, but we were the only people eating. The menu was reasonable, and we were recommended 'good' dishes - and they were! An excellent Salmorejo, berenjenas con miel de caña (para compartir), and a lamb stew. Regrettably we only drank alcohol free beer, so were unable to sample the wine. But on the basis of this visit, we would strongly recommend you eating here should you visit Alhama de Granada. The service was excellent and friendly. 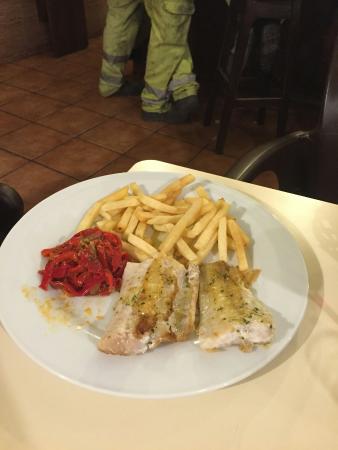 Bar Gallego appeared to be favoured mostly by locals and can be found down a narrow road leading away from the town square. During the heat of the day the bar is kept cool with air conditioning, and in the evening it was cool enough to sit outside despite the extreme heat during the day - about 40 degrees! The portions are generous and the food a gourmet experience. The food is prepared simply and whatever is added just enhances the natural flavours. We had lunch there and returned in the evening to experience a greater variety of the food on offer. We had calamares that was prepared whole and grilled as opposed to the usual rings done in a batter. What a delight! The fish skewers melt in the mouth, and the tomato salad complimented the richness of the fish. The bar serves tapas with each round of drinks ordered and is a great way to taste more of the tapas that can be ordered in bigger portions. We also tried a drink called tinto verones, and I can recommend this over the better known sangria. 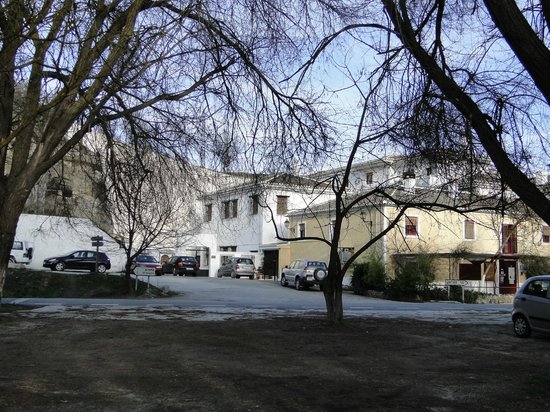 Some 2-3km outside Alhama de Granada, this country restaurant serves excellent wholesome food the menus del did is great value at €10 during the week. Menus in English as well as Spanish. Plenty of non meat options, both fish and more salad based meals. Highly recommended.