Reviews on Mediterranean food in Ponferrada, Province of Leon, Spain. Ponferrada (Spanish pronunciation: [pomfeˈraða], from the Latin Pons Ferrata, Iron Bridge) is the capital city of El Bierzo in the Province of León, Spain. It lies on Sil River and it is completely surrounded by mountains. It is the last major town on the French route of the Camino de Santiago before it reaches Santiago de Compostela. In 2008, it had a population of 69,769.
Things to do in Ponferrada 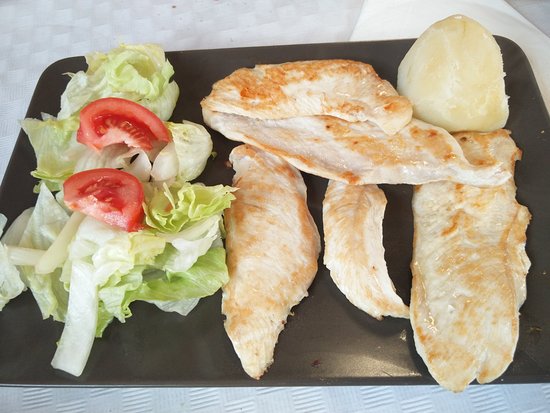 WeÂ´ve been doing a little tour through the northwest of Spain. Until we got to Ponferrada every place we tried was good (as spanish food is). But once we tried Restaurante Bernain (recommended by word of mouth) we definitely knew it was the best place we were going to try. It was absolutely amazing!! The food, the service, the environment!! Such a lovely family managing the business! Definitely 5 stars! 100% recommended ! Shame we cannot travel every month to this place!! We will remember it !! 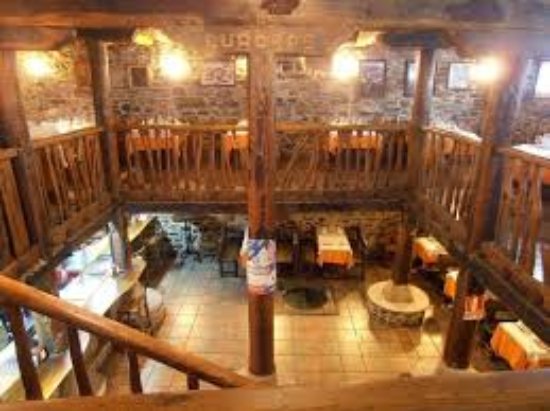 Found this place as we walked around the town, we decided to stay here as the garden had tables and chairs. There was a nice cooling breeze coming up the walkway where we were sitting. The food came quickly the waiter friendly, the steak sauce looked as if had been sitting for some time although that might of just been the way the sauce was. The fish was very well cooked, they have free wifi ask the waiter.

Small place that you could easily miss. Located in a town near Ponferrada, it is a restored old winery. The indoors dining room is small, but it has a beautiful outdoors areacovered in ivy and vines. The menu is short but all options are attractive. Food is well prepared and well presented and priced accordingly. Lovely experience. 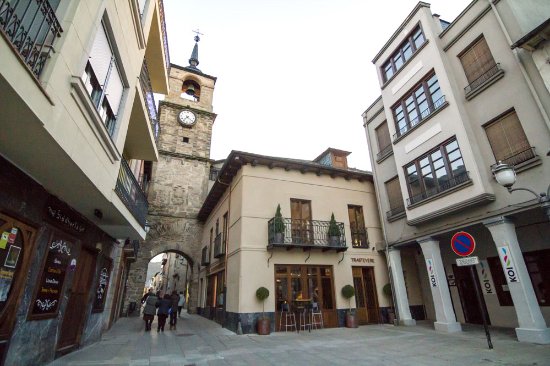 We were "welcomed" by grumpy staff who seemed to be annoyed by the presence of customers. We ordered and, whilst I don't expect for every restaurant to cater for children, a warning about the size of the dishes would have been nice. My 11-year-old nephew ordered a schnitzel with fries which was big enough for him to make 3 meals out of it. Also, the fries were cold and soggy when they arrived. Needless to say, most of the dish went back to the kitchen. Now the adult food...- Cannelloni that were not offensive, but definitely there was a lot of room for improvement - for example, if you are to sprinkle them with cheese on top, it would be appreciated if said cheese were sprinkled throughout, rather than only over 1/4 of the dish.- My pasta, homemade pasta with funghi porcini, was probably the best in terms of flavour but the pasta must have been boiled with insufficient water and most of the tagliatelle were stuck together in little bundles and, as a result, some bits were cooked some uncooked. Not very pleasant to eat.- A burrata salad so over-the-top in an attempt for whoever designed it to be creative that was turned into a mediocre salad at best - my husband described it as awful. Too many unnecessary ingredients made the delicate flavour of burrata disappear. - And "best" for last. A ham and porcini risotto that would make Italy declare war to Spain if an Italian were ever to try this abomination of a dish. So many wrong things with it that it makes it pretty hard to choose one to start with... The ham was old and tasted disgusting. The risotto was NOT risotto: wrong type of rice and it was most definitely not cooked as risotto should be cooked (for the record, I have lived and worked in Italy, so do know my Italian food). It tasted and looked like the rice had been boiled separately and then quickly mixed with the porcini and the old ham. It was sitting on a bed of what looked like flavoured water - nowhere close to the creamy texture that a risotto should have. It all went back to the kitchen. When our table was cleared, the waiter asked whether my sister-in-law hadn't liked her risotto. We said she hadn't (she was not at the table anymore) and all we got was a "she should have said, we'd have brought her something else". Not the slightest attempt to find out what was wrong with it. We were also charged for it. I've read reviews that talk about this place being good value for money and can only conclude the people who wrote them are foreigners who live in expensive cities. I grew up in Ponferrada but now live in London. I can tell you that â¬16 for a plate of pasta in Ponferrada is daylight robbery - especially for a plate of poorly cooked pasta. I can get better and cheaper in London, where the cost of living is 5 to 10 times higher than Ponferrada (depending on what it is that you're buying).It gets 2 stars instead of one because of the only good thing it's got: the venue itself. Great location and great decor. But I shan't be going back. 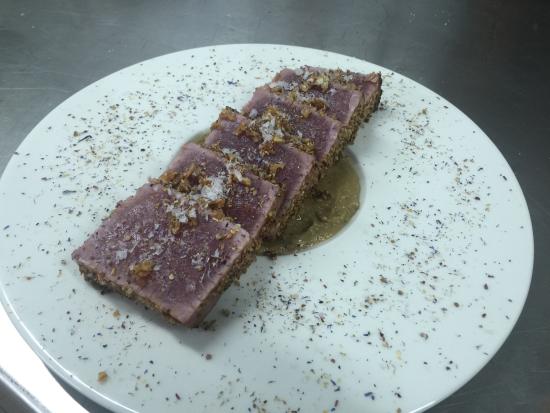 I was initially looking for another restaurant in the same area which was fully booked, so my colleague and I set off to find an alternative.We came across Arco del Cenador and entered to see if there was still space at 3 pm Saturday, we passed a full dining room and through a full second dining room and were asked if we would like to eat on the patio. As it was 25c outside and there was a table in the shade we accepted.There is a set menu you can chosse from Monday- Friday for 12 euros which includes the choice of 1 from 5 starters and 1 from 5 main courses, a dessert + drink are also included, on Saturday the manu is at 14 euros.The waitress presented the menu very quickly but as I am not an expert in Spanish I only caught half of the choices, as she could see I was struggling with the translation she left a copy of the menu on the table for us to choose at our leisure.i chose a potato and marinated tuna salad as my starter and grilled sea Bass as my main. The quality of the food was excellent and the service was very efficient, I would definitely recommend this restaurant. 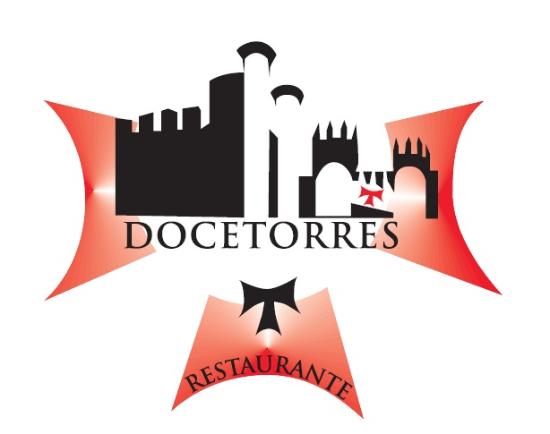 This is one of the hidden gems of Ponferrada. Located opposite the castle, it offers tasty food at very democratic prices. The wine recommendations (including local wines from star winemakers such as RaÃºl PÃ©rez) were fantastic, and so was the Executive Menu (a steal at â¬20). There is a cheaper â¬12 menu which is just as good. Highly recommended if you want to eat out in style in this pleasant town without breaking the bank.

Where to Eat in Ponferrada: The Best Restaurants and Bars

This restaurant deserves to be # 1. We didnât have a reservation and couldnât sit outside in the plaza but instead sat inside of the restaurant. It was a Saturday night though so one canât fault being accommodated this way. The service was tops, friendly, efficient and professional. The wine list is extensive allowing you to choose something to your liking and budget. We had a bottle of Losada Bierzo mencia. The food was delicious and creative. To start We shared a vegetable crepe and thinly sliced aubergine with tomato and Parmesan - both were delicious and it is hard to rate the best of the two. Next, we shared a couple of fish dishes, the salmon with apple sauce and crispy patatas and the hake, or merzula with a seafood sauce - yum to both. We finished with the cheese cake and a coffee. This all came to EUR53 as the food was considered as menu del dia plus extra for the wine and coffee. FANTASTIC.

The 10 Best Things to Do in Ponferrada, Spain 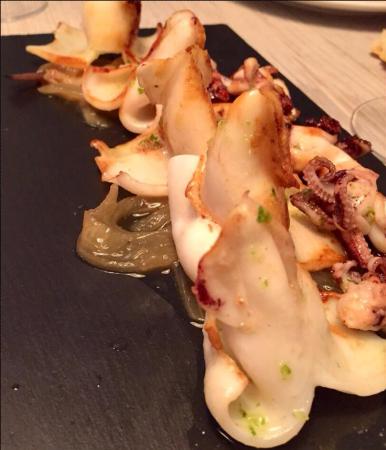 Went with Trip Advispr recommendations. Hamburgers and modern local fusion dishes. They opened the upstairs restaurant for the crazy English couple that wanted to eat before 21.30! Great food and main dishes can be ordered as tapas to share. Four was more than enough, washed down with a chilled local red. Diana our waitress didn't speak English, but didn't matter - great, friendly, fun service. Well worth the visit.