The 7 Best Things to Do in Philipsburg, St Martin / St Maarten

Philipsburg is the capital of Dutch St. Maarten, a Caribbean island divided into Dutch and French (Saint Martin) sides. Bargain seekers flock to the duty-free and sales-tax-free stores of Philipsburg's mile-long commercial district. Visitors also enjoy the city's art galleries, historic forts, casinos and zoo, as well as Great Bay Beach and its boardwalk. Offshore, on the 12 Metre Challenge, guests can work as part of the crew on one of five boats used in the 1987 America's Cup competition.
Restaurants in Philipsburg

The Yoda Guy Movie Exhibit, nestled amongst Front Street's duty free jewelry stores, is possibly the most surprising Enterprise in the Caribbean. Who would expect to find Darth Vader, Pinhead from HELLRAISER and Riddley Scott's ALIEN in St Maarten? But this unprecedented showcase has that and a whole lot more. There are displays that span six decades of movie making, relics from THE TERMINATOR, MEN IN BLACK and even THE MALTISE FALCAN. There's also an incredible collection of lifecasts, the actual faces of Hollywood stars, From Bogart & Brando, though Sean Connery & Jack Nicholson to Michael Jackson, Johnny Depp & Angelina Jolle. The collection is extended to include famous historical figures too… the actual faces of Abraham Lincoln, (cast 3 months before his assassination), Benjamin Franklin and George Washington, (cast in. 1778 and 1783 respectively by french sculptor Jean Antoine Houden), and death masks of both Oliver Cromwell, (1658) and Vladimir Lenin (1924). The Exhibit is the brainchild of Hollywood creature effects wizard Nick Maley, known as "that Yoda Guy" for his contribution to the creation of Yoda for the STAR WARS sagas. If you don't know who Nick is, just google his name. He made over 50 movies, including SUPERMAN, HIGHLANDER, KRULL & LIFEFORCE, worked with Hollywood legends like Sean Connery, Sir Anthony Hopkins and Harrison Ford, (you will see them all in the exhibit), was featured in CINEMAX and HBO specials, won a place in THE GUINNESS BOOK OF WORLD RECORDS and was nominated for an EMMY. Nick shares his professional perspective on the making of famous movies via DVD and, if you are lucky enough to find him there, he will dedicate purchases from the Yoda Guy Shop and do photos with customers. The Shop sells signed movie memorabilia, posters, antique STAR WARS comics, behind the scene photos and storyboards… unique autographed slices of STAR WARS history that become a legacy to pass on through the family. There's also Nick's celebrated Caribbean artwork, (exhibited in galleries in 18 countries and toured the world with UNESCO. Nick and his wife Gloria have created the Yoda Guy Movie Museum Foundation, a not for profit group to oversee the Exhibit's development. Don't miss this once in a lifetime opportunity to support the museum and visit a STAR WARS celebrity. It is recommended on all major cruise lines as a MUST SEE for art and movie fans.

This museum is worth a stop. The Yoda Guy is the man who created Yoda and many other movie characters. He lives in St Maarten with his wife and will sign artwork that is purchased. We spent two hours in this museum last year. We were happy to see he is still there after the damage. We talked with him and they are up and running again. Very worth the stop. 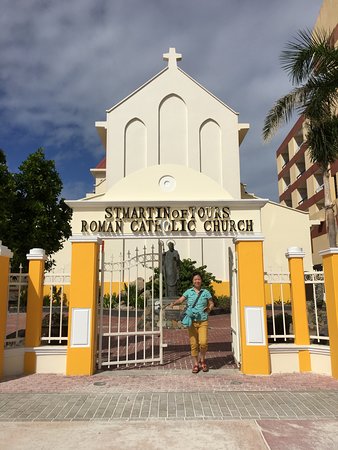 This was the most joyful mass we have ever attended; I was sorry when it concluded. A Catholic church, but with a bit of a Southern Baptist flair. Excellent choir. The priest concluded his homily by playing his guitar and singing "How Great Thou Art". So powerful. People celebrating a birthday (including my husband) were asked to stand while the congregation sang "Happy Birthday". Visitors also asked to stand while a welcome song was sung. Parishioners were so friendly and welcoming. A highlight of our trip! 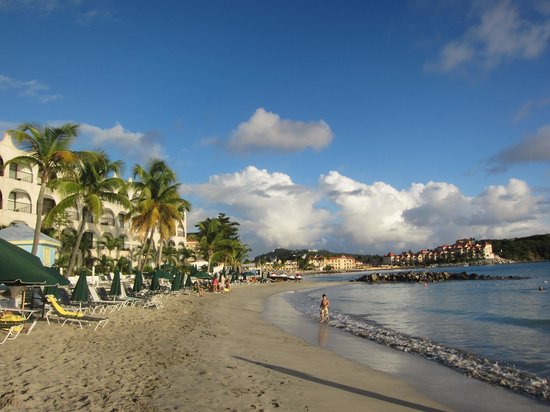 We stayed at the Belair Beach Hotel which is on Little Bay Beach. The beach was nice and calm and clean. There is a small restaurant and bar at the Hotel called Gingerbread Cafe to get snack, drinks or meals. The water there is clear and warm the entire two weeks we were there. 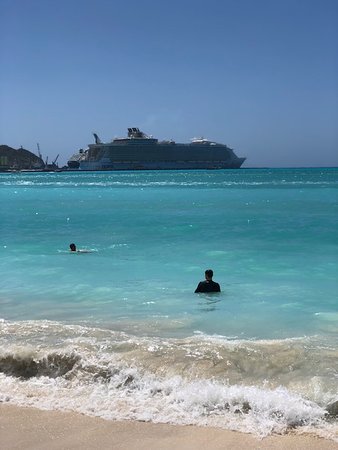 This is one of the best Beaches you will find on your eastern Caribbean cruise.and it is by far the best value. Great drinks, food and shopping are just minutes away from the ship.
Don't miss the opportunity to visit this amazing town and island. We are looking forward to a return trip. 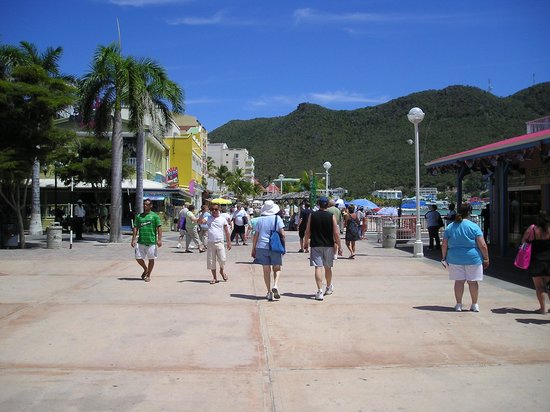 Nice walk with lots of typical tourist shops and bars. There is a spot midway with public washrooms which were very clean. 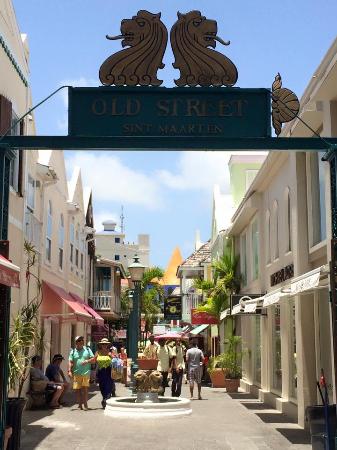 If you are in Phillipsburgh and on the Boardwalk take a short stroll over to Front Street. The beautiful island architecture and bright colors enhance the shopping experience. Lots of people and many little shops where you can find just about anything. Such a cute little place. Have a small bite to eat or cold drink when you make a stop and just people watch. Make sure you stop here! 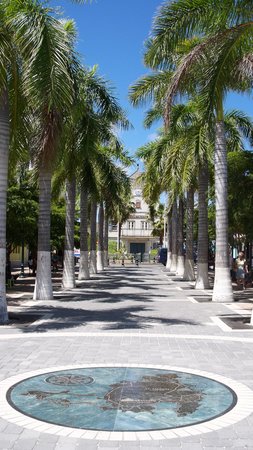 This crowded street is a popular tourist center for duty-free shopping.

All the ships dock here and could be a little overwhelming. Front street was 3 feet deep in water during the 2 hurricanes back in September. This was the first area that was worked on to bring the tourists back. Numerous top shelf stores up and down the street. Some very nice breakfast and lunch restaurants.