The 10 Best Things to do in Sainte Genevieve, Missouri (MO)

Ste. Genevieve (Sainte-Geneviève with French spelling) is a city in Ste. Genevieve Township and is the county seat of Ste. Genevieve County, Missouri, United States. The population was 4,410 at the 2010 census. Founded in 1735 by French Canadian colonists and settlers from east of the river, it was the first organized European settlement west of the Mississippi River in present-day Missouri.
Restaurants in Sainte Genevieve

Enjoy a unique, nostalgic, and immersive honey-tasting experience at the oldest commercial building on Market St. As always, tastings are absolutely free!

What a gem of a place in Ste. Genevieve! We enjoyed this hike so much! We took our teenage daughter, 4 year old & 2 year old. They loved playing in the creek here. The waterfall is simply gorgeous.

Ste. Genevieve's downtown area National Historic Landmark District offers visitors a rare glimpse into a French colonial past. Mixed in with the historic homes and attractions are great restaurants, quaint shops, a candy store, ice cream parlor and winery. Narrow streets and fenced gardens surround some of the most significant 18th Century architecture in America.

We asked for recommendations with a six year old and the staff was so nice, helpful, with good advice. Clean restrooms too.

When my wife & I were walking around Historic Ste. Genevieve last week, a shopkeeper suggested we stop in to see Ste. Genevieve Catholic Church. She noted that the church steeple is visible from just about anywhere in town, so it should be easy to find. She was right on all counts. The current brick church building was opened in 1880, but there were two previous churches built on the property dating as far back as the mid-1700s when French settlers occupied the area. The church now towers (literally) over the town of Ste. Genevieve, but the exterior only gives you a hint of what's inside. The high arched ceilings, the large dome above the sanctuary, the beautiful large stained glass windows, the exquisite statuary & altarpieces, the imposing pipe organ in the back loft, and the high backed wooden choir benches on each side of the main altar all pay tribute to the faith that inspired the church & to the the faithful artisans who built it. Give yourself a half-hour or more to walk around inside (when there's not a Mass or other official activity going on) and to stare & take pictures of the amazing features of this beautiful structure. And be sure to heed the review title from TA member DandLtravel: "Don't Press the Button ... ." We wish we had read that before we arrived, because we were shocked when the recorded narration echoed throughout the church. Thankfully we didn't press that button until the religious education session wrapped up that morning. The recording has a lot of valuable historical information to offer, but there's a far more quiet summary on the historical plaque outside the main church doors.

Hawn State Park is one of the loveliest parks in a system full of lovely parks. Clear, sand-bottomed streams, wild areas ripe with orchids and awe-inspiring views combine to make Hawn a place that Missourians treasure. Geology buffs love Pickle Creek for the number of exposed rock types. Hikers frequent the Whispering Pine Wild Area for its quiet trails with expansive views. Bird watchers flock to the park for its variety of birds. And there are plenty of quiet spaces for people to get away and enjoy the outdoors.

We walked a couple of trails and did not get far because of significant water across the trails. It had rained (again) the night before so we did not get the full experience. The picnic area was great and we could certainly see the wonderful potential here. Plan for wood ticks.

Travel back to Missouri’s early French roots at Felix Vallé House State Historic Site. The American-Federal style Valle house was built in 1818 and today is furnished in the style of the 1830s with a host of artifacts that show the American influence on the French community of Ste. Genevieve after the Louisiana Purchase. The Bauvais-Amoureux House, built in 1792, is one of several other historic homes in the site, nestled within historic Ste. Genevieve.

Cannot recommend highly enough. We visited today with our six year old granddaughter and tour guide and gift shop manager Melissa engaged her fully, enthusiastically, got her to ask smart questions, and educated and entertained all of us. She was just fantastic. The gift shop is great too, full of flour de lyes goodies, all reasonably priced. We thoroughly enjoyed our visit. 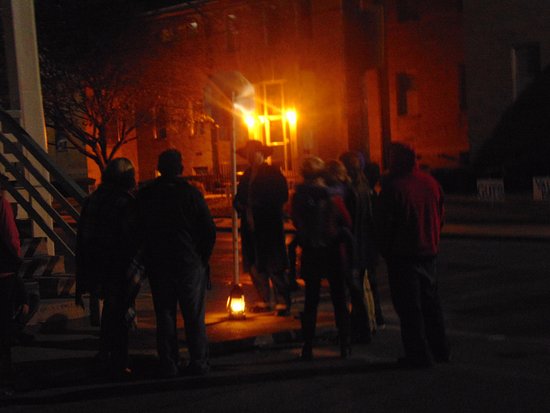 Come on a Ghost Tour in Historic Downtown Ste Genevieve. Learn the Tragic Tales of Past Inhabitants and Stories of their Sightings. Bring your camera as Guests have found evidence in their photos. Get a Psychic Reading while you are here.

I always stop by for a hike when in the area because so there are many different topographical features condensed into such a small area. Everywhere you turn it's something new and different even tho the hike is just under 2 miles long. The trail is better marked than the last time I visited; not only w/ the typical red arrows but also white marking on the trees to keep you on course. This is a hike where you should definitely wear hiking boots, lots of slippery sand, leaves, roots and rocks & boulders. Maybe even a hiking pole as it goes up and down the canyon a few times so be prepared for some steep inclines. The bluffs and water features are wonderful! If one doesn't lolly gag, plan on the hike taking about 1 hour; longer if you spend time checking things out. Definitely bring a camera or phone to take pics. Due to Covid, when the parking lot is full, no more hikers are allowed so keep that in mind, no overflow parking allowed.