Top Things to do in Ptuj

The 10 Best Things to Do in Ptuj, Slovenia

Ptuj (pronounced [ˈptuːi̯] ( listen); German: Pettau; Latin: Poetovium/Poetovio) is a town in northeastern Slovenia that is the seat of the Municipality of Ptuj. Ptuj, the oldest recorded city in Slovenia, has been inhabited since the late Stone Age and developed from a Roman military fort. Ptuj was located at a strategically important crossing of the Drava River, along a prehistoric trade route between the Baltic Sea and the Adriatic. Traditionally the area was part of the Styria region and became part of the Austria-Hungarian Empire. In the early 20th century the majority of the residents were of German extraction, but today the population is largely Slovenes. Residents of Ptuj are known as Ptujčani.
Restaurants in Ptuj 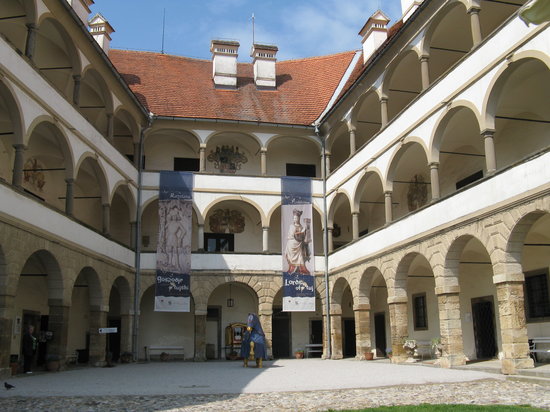 If someone wants to visit a medieval castle in Slovenia, ptuj castle is the most representative one. The ticket that allows you to visit the inside rooms (carnival masks, musical instruments was rather cheap, etc.). You may spend two or three hours visiting all above (the horse stables was closed when we were there), and have a coffee having a great view of the surroundings ( village, river). 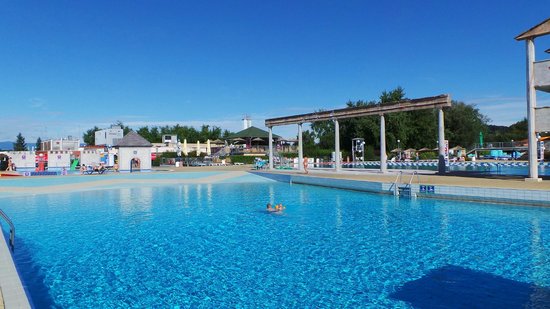 Our family needs a little down time during vacations..and Terme Ptuj was perfect! We went mid-week and there were no more than 200 people in the entire park. Saunas and hot tubs are good, place is clean, water slides are a lot of fun, just a great spot of a mini vacation! After a good day of relaxing in the water - we are off to prague. Even though we only speak english - we managed to figure out where to go - to change in the changing rooms between the entrance and the lockers - oh travelling is fun! 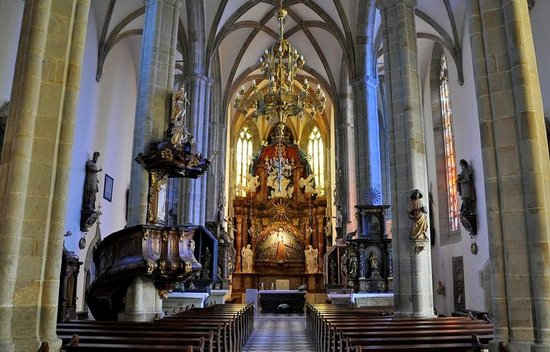 Very beautiful and peaceful church. Worth a slight detour.
Pretty impressive for being out in the middle of nowhere.
The site sign labels the church 'Bazilika Marije Zavetnice'
You can't miss this church as it's located on a hill and you can see it for a few miles before you get there.
We stopped by on purpose driving from Maribor to Zagreb.
It's about 15-20 minutes southwest of Ptuj (if you don't miss your turn as we did, silly gps).
In addition to a stunning altar there are several side altars and status.
Also there are gothic frescos on the ceiling in one part of the church.
There's a good description in the Slovenia DK book on page 180. 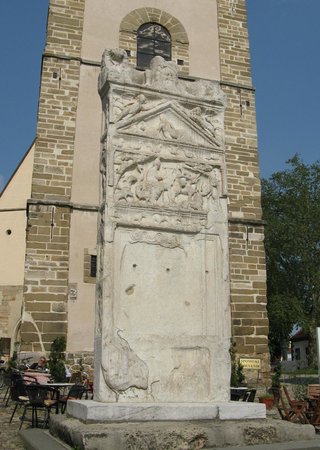 The tombstone is right in Slovenski Trg in front of the city clock tower. It's fairly eroded with a face, some figures and a few animals discernible. It also suffers from pollution.

5. The Minorite Monastery and St Peter and St Paul church 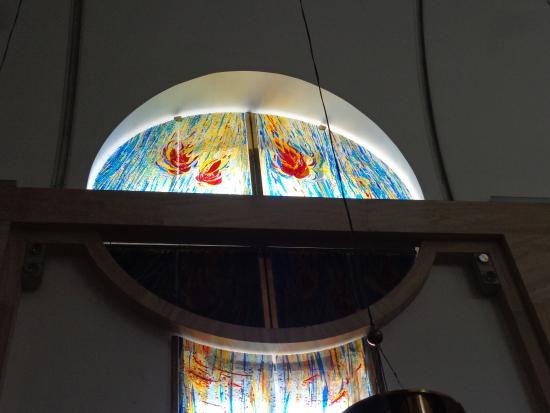 Only the cloister and church are open to the public. The church is quite plain having been rebuilt after ww2. There are some nice statues from the old church though damaged from the bombs. 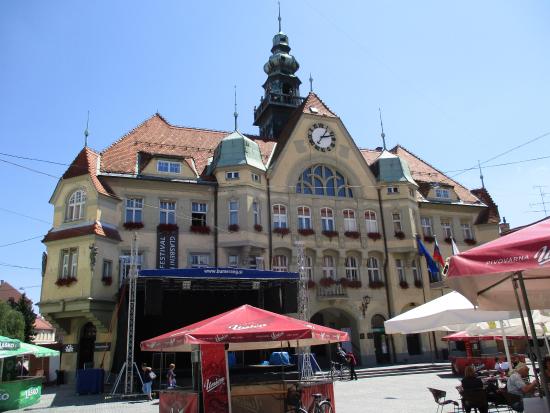 We were taken here as guests. So I have no idea of the cost. It was a private visit with just our small group of 6. The setting is very nice and authentic. The underground wine cellars are very interesting and the tour was informative.
The lady guide was a bit abrupt, and I got the feeling she preferred not to be there. She was very knowledgeable about the products and explained the wine-tasting process well. But she needs to lighten up!
In the tasting room, nicely decorated, they showed a cute film about the different varietals we tasted.
The (Pullus) wine was not exceptional, but it was cheap. So we bought a few bottles for the road. We had better wines elsewhere in the karst area of Slovenia. 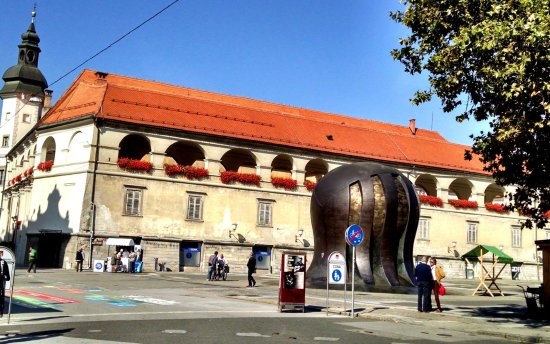 Ptuj main square is surrounded by interesting attractive buildings. The most impressive is the 1907 neo-gothic, Germanic town hall. Opposite the town hall is an impressive statue of St Florian. There are a few cafes with outdoor Seating which were well attended. 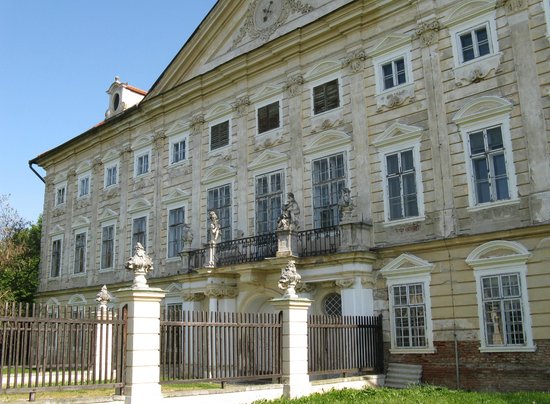 Dornava is one of the best manor houses with parks in Slovenia. Baroque building with many decorations and, behind closed doors, a huge main hall with frescoes. You can walk around and look at abandoned Fountain. Owners (state) and commune don’t care for the huge park and place where you can admire what remained from the old park. Access is really simple and it is not far from Ptuj. 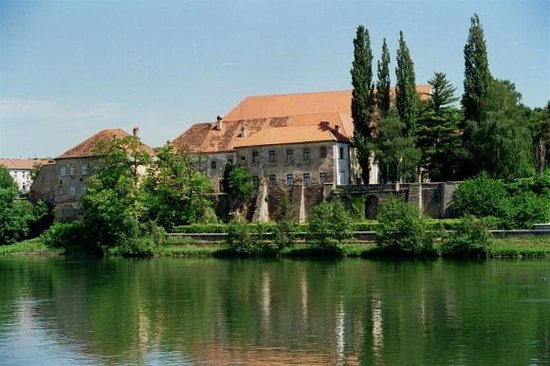 Again, the monastery was closed inside with no advice. Even the tourist office did not know that is was not open : this shows you how "seriously" are treated visitors in some parts of Slovenia!! So, I could only see it from outside. And appart of the main pink church, the rest was under repair apparently. Disappointment again in Ptuj! 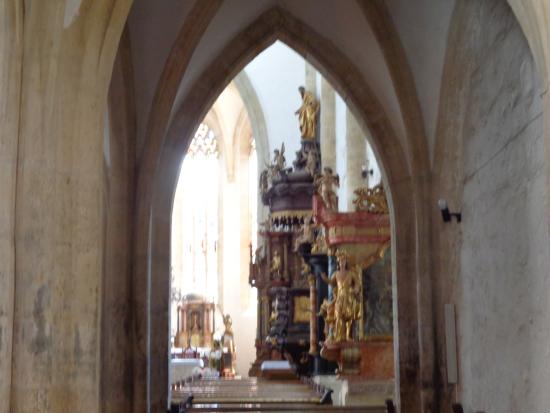 This gothic church was original built in the 9th century.
It feels ancient when you enter under the Romanesque arches.
There are nice altars and sculptures through out
Some faded frescoes ordain some of the walls.
A 15th century sculpture of king George killing a small dragon is one of the many treasures.