Top Things to do in Costa Blanca

The 10 Best Things to Do in Costa Blanca, Spain

Costa Blanca is the name given to Alicante's coastline in Spain, which stretches over 200 kilometers. It is an incredibly popular holiday destination for tourists, because of the marvelous weather and beaches. Costa Blanca is family friendly, thanks to the huge range of activities available there from beaches and golf to museums and parks. There are the beaches, such as Los Náufragos in Torrevieja with its volleyball nets, golden sands and Blue Flag status, or smaller beaches like Serragrosa with its crystal waters, ideal for swimmers. But there are also golf courses (particularly the Villaitana club de golf near Benidorm) and watersports facilities and cultural sites like museums and galleries, such as the La Asegurada Municipal Museum in Alicante which has extensive collections of Spanish art. You will need a couple of weeks on the Costa Blanca just to scratch the surface of its entertainment potential.
Restaurants in Costa Blanca 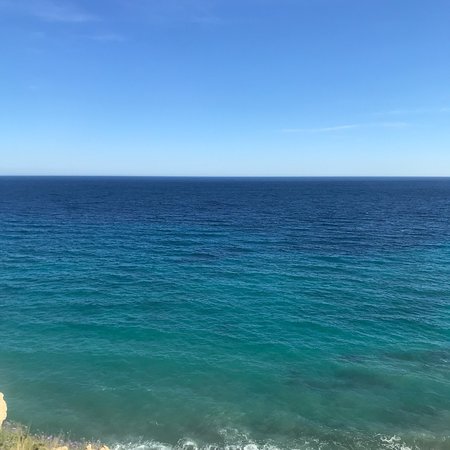 As you wander around the cobbled streets you find lovely little Spanish Tapas bars around every corner. Many offering good value and ideal to stop and do a little people watching. The views from the top are quits stunning, across 3 Beaches, the port, the Mediterranean and peacock island. Easy to spend a nice day just wandering. BUT. Do beware of scammers and pickpockets who also spend their days and nights there trying to relieve you of your money and possessions. Take care. 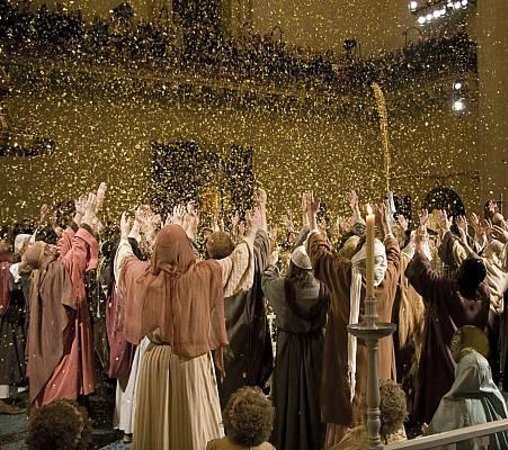 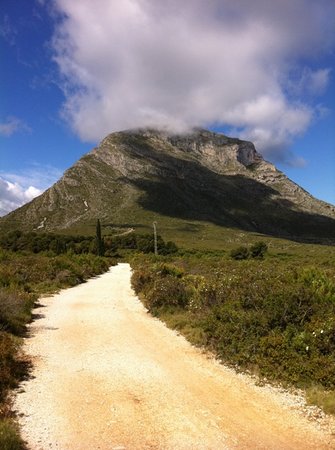 Numerous trail options as well as beautiful views from all around. It’s an easy hike up along the trail from marina to Cabo headland but there are choices as to difficulty and around the headland it’s reasonably flat - Montgo hill (mountain?) with its rock formations and caves is much more of a challenge at around 2500ft - where numerous access trails are on the inland side of the CV-736 Javea/Denia road. There is the usual “hiker beware” of dog mess which seems to litter everywhere you walk in Spain - really disgusting and spoils the general ambience of hiking as you have to pay more attention to the trail than the views! 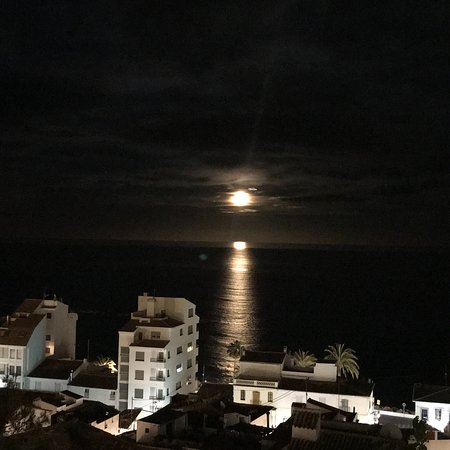 This is an interesting "casco antiguo" with loads of little streets and alleyways to explore, and lots of steps! The streets are laregly not commercially orientated so it makes for a great place just to wander about and absorb the atmosphere. Great views at odd moments from frequent "miradors". 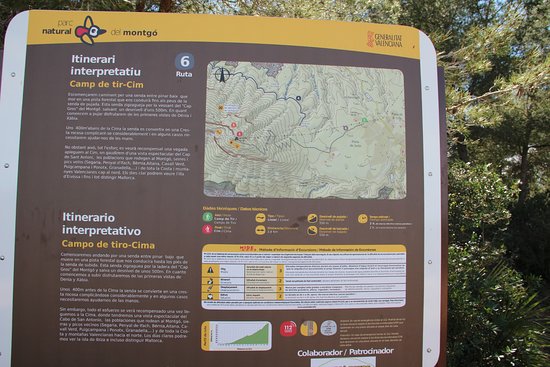 The park has numerous hiking trails and a lot are fairly easy going. You can of course attempt to climb Montgo mountain but a much shorter and easier route is the trail leading up from Javea port area to the lighthouse headland, from where you can look across to Ibiza island. If hiking on the far side of the Denia/Javea road then you’ll get great views inland and along the coast in both directions, although you will need to keep an eye open for frequent piles of dog mesh:-( Regardless of your fitness level I strongly suggest wearing appropriate footwear and taking water. 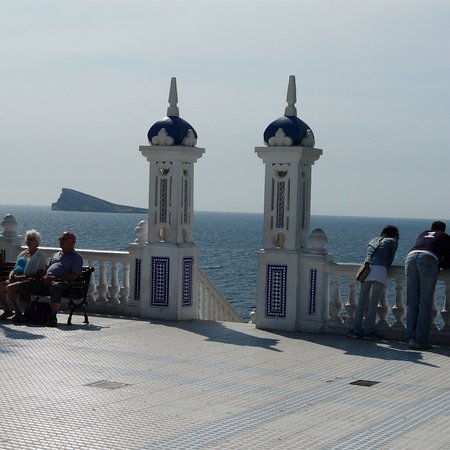 We got to visit "Placa Del Castell" a few times when we visit Benidorm. The views are spectacular overlooking Poniente, Finestrat & Peacock Island. It's nice and peaceful and sometimes they have a singer/guitarist and a group of men playing pipe music which is very soothing. They sometimes have a few stalls with handcrafted gifts. 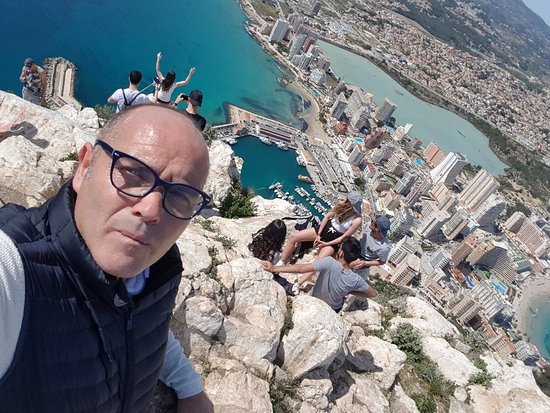 I've been coming to Calpe for 40 years - and this year I resolved to climb the rock - which I did on Christmas day. There are some sections that are not for the faint hearted - and I can only agree with the warnings to wear proper walking footwear - it's slippy in places with many parts of the "path" being just a scramble over sharp rocks with a precipitous drop beneath you. All that having been said, the view from the top is worth the effort. 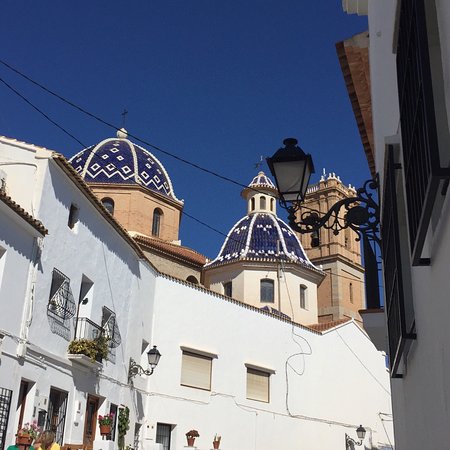 The church is located in the small square which leads to the viewpoint of Mirador Cronsistas de Espana and is worth visiting just for the views. The church was closed when I visited but the square is lined with restaurants and is a pleasant spot to just sit and enjoy the ambience. Streets and alleys of the old town lead in all directions from the square. It’s quite a steep climb through the narrow cobbled streets but you can probably get a taxi. 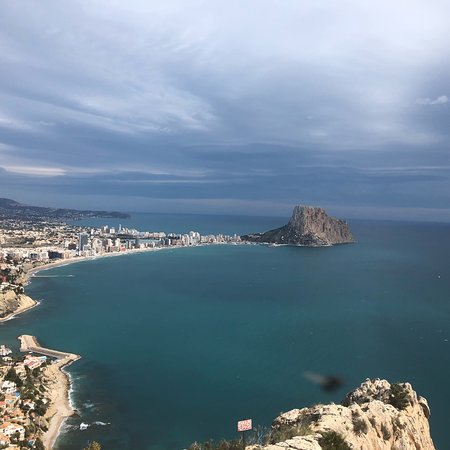 The road leads about half the way and then it is blocked and you have to continue by foot - about 500 m. in steep climb. Then it becomes flat along the mountainside with great views to all directions - fron Penyal d'Ifac on one side to Faro Albir on the other. 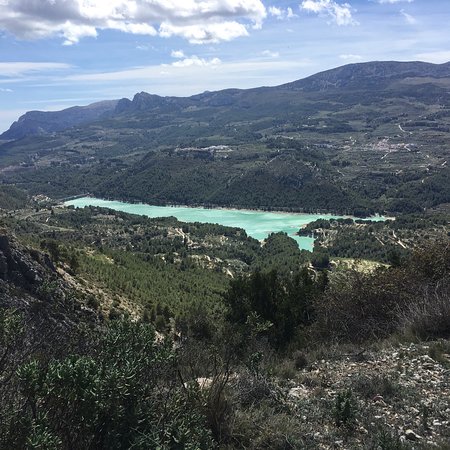