The 10 Best Things to Do in Chimayo, United States

Chimayó is a census-designated place (CDP) in Rio Arriba and Santa Fe counties in the U.S. state of New Mexico; the name derives from a Tewa name for a local landmark, the hill of Tsi Mayoh. The town is unincorporated and includes many neighborhoods, called plazas or placitas, each with its own name, including El Potrero de Chimayó (the plaza near Chimayó's communal pasture) and the Plaza del Cerro (plaza by the hill). The cluster of plazas called Chimayó lies near Santa Cruz about 25 miles north of Santa Fe. The population was 3,177 at the 2010 census.
Restaurants in Chimayo 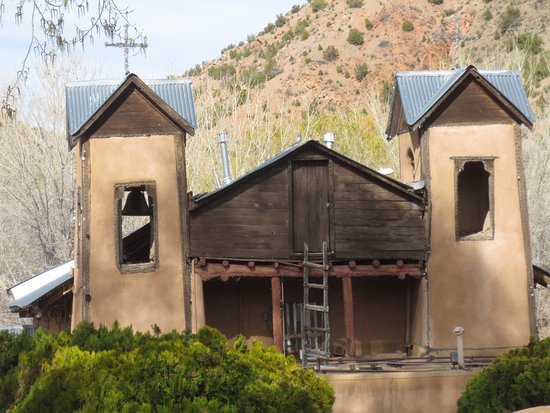 As an ex-Catholic, it was a little over the top, but obviously is an important place of healing for many. The setting is lovely. It is moving to see the photos and the crutches left in the church as people were "healed." I thought, "What harm?" As my two friends attended mass, I too photos of ice in the little creek nearby. Thousands of rosaries bedeck statues of Mary. It is very funky and beautiful and obviously has been quite meaningful to thousands of people... and if the holy dirt helps my friends with cancer, so much the better. 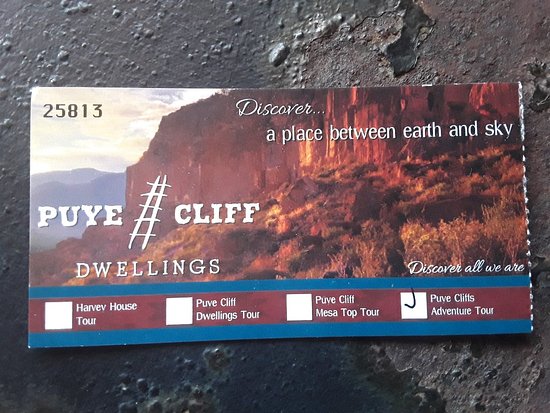 The ancestral home of the Santa Clara people may be visited by guided tour to the ruin sites.

We visited with family and had an interesting and informative time. There is a little museum and film that tells about the area native American culture. They drive you up to the top and you can either ride back down after the tour or climb down the side of the cliff. It is not dangerous but you should be able to handle steep stairs. The guide stays with you. The "Lourdes" of America, where miracles are thought to happen.

If you are in northern New Mexico you must make a trip to Chimayó. The chapel is very spiritual. Take the time to visit the grounds and take in the beauty and peace of the location. Learn the history of the location and believe. 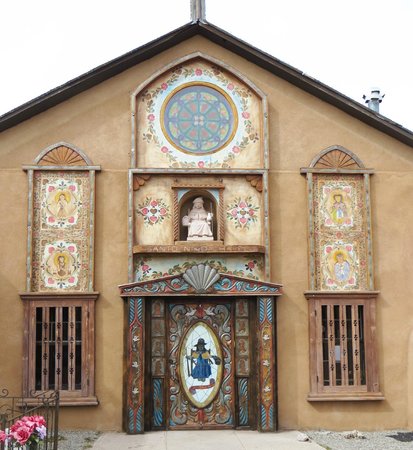 This beautiful chapel built in 1857 is within walking distance of Santuario de Chimayo. I can't imagine visiting one and not the other. There is a museum and gift shop nearby. During Holy Week there were street vendors selling roasted corn, drinks, and famous Chimayo chili power. A local shop nearby "Vigil Store" has been in the same location since I first visited 35-years ago. The only lodging are a few Bed and Breakfasts. For example, Rancho de Chimayo Hacienda on Juan Medina Rd. also boasts a James Beard awarded (2016) restaurant across the street from it-Rancho de Chimayo Restaurant.
Inside the chapel, pilgrims leave baby shoes by the statue of Santo Nino because it is believed that Santo Nino (Jesus as the Holy Child) wears out his little shoes while roaming at night spreading miracles. It felt strange seeing these artifacts the first time. The first pilgrims here were military soldiers who survived Japanese prison camps. Following WW II, ~2,000 walked over 50 miles to the Chapel barefoot to give their Devotion to the Saint they prayed to while interred, Santo Nino. The Chapel is now a place dedicated to children. I did however witness groups of soldiers, many dressed in fatigues and carrying crosses, arrive by foot at both Sanctuaries before dawn on Good Friday. 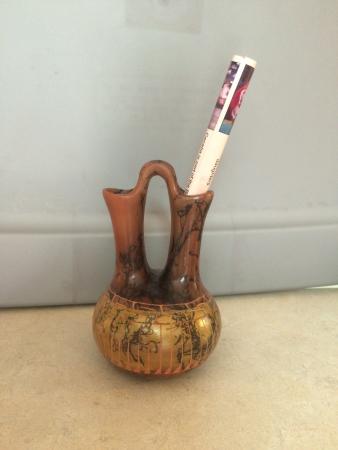 We stopped in on our way to Taos. The shop is a pretty large size and has a lot of woven product from rugs and placemats to some clothing and purses/wallets. There is also a small selection of jewelry and leather goods.

The highlight of the trip for us was a visit to the work area to the left of the shop where they have 3 or 4 looms and there was a gentleman weaving a rug.

He very kindly explained to us how it all worked and what was involved. I have seen a number of looms over the years but never had anyone take the time to talk about it and certainly not with the passion that he showed.

Stop in! Very short distance off the road. 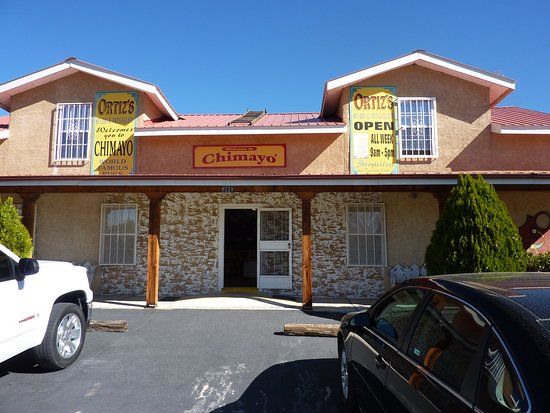 We always plan a stop at Chimayo Trading and Mercantile and Chimayo Trading Del Norte with our out-of-town visitors. John Abrams in Chimayo and his son, Gabriel, in Rancho de Taos are always ready to explain the various native art works and provide insight into the native artists they carry. We rely on John and especially Gabriel these days to to help us make new purchases for our collection. 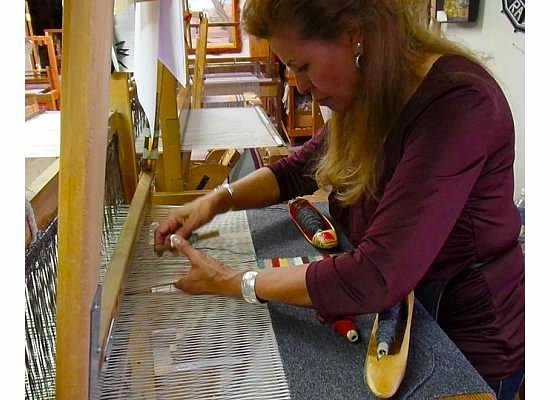 We are a family business manufacturers of handwoven Spanish Colonial textile products. Our address is: 814 State Road 76 Chimayo, NM 87522 We currently do not have a website. Your listing is incorrect. Please make these changes. Thank you, Carlos Trujillo Owner TRUJILLO'S WEAVING SHOP

Authentic old looms aren't just for looks, and the man working there is probably the founder's son and owner. What a nice guy, ready and able to give you as much information as you want. Although he does a lot of custom orders, you can still select from a pretty decent inventory of rugs and other weaving. In addition, Trujillo's carries beautiful specimens of Santa Clara pottery as well as others, plus hand made artisinal jewelry. Prices are very good, but don't expect cheap forgettable kitsch. That's one category that is thankfully missing here. As others have said, you can buy great dried chiles red or green, dried chipotle, piñon nuts, Mexican oregano. The proprietor gave us good recipes and explained the differences in the types of chiles. Prices were very good compared to the Santa Fe farmers market. They also sell jewelry, religious relics, art, and cold drinks. But we went for the chiles. And if you run out they have a website where you can order more. We've driven from Santa Fe to Taos several times and this time we took the "High Road", what a pleasant experience and enjoyed the beautiful high country views. The fields covered from a dusting of snow made it that much more enjoyable. 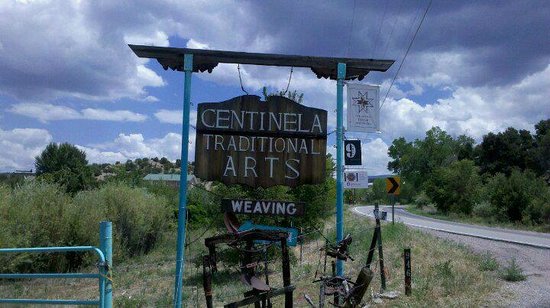 Centinela Traditional Arts is a tapestry gallery located in Chimayo, New Mexico, specializing in hand woven tapestry wool products using natural dyes, custom-dyed yarns, handspun yarns, and the traditional Chimayo and Rio Grande weaving styles. The weaving gallery is run by Irvin and Lisa Trujillo, who are award-winning weavers whose work has been shown in museums worldwide, including the Smithsonian. The tapestry gallery also represents several other talented weavers.

26 years ago we stopped at Centinela Traditional Arts. I wanted a vest. They didn't have my size so I ordered one. I received it a few weeks later. It's more art then clothing. I love it. This past October we stopped again. You have to keep your eyes peeled for the entrance. It's on your left as you leave Chimayo on the high road to Taos. If you miss it, turn around and find it, you won't be disappointed. On this trip we saw freshly dyed yarn drying outside in the sun,an unbelievably beautiful scene. Inside the shop one of the owners was weaving. Lovely people. One of the reasons I love New Mexico.