The 10 Best Things to Do in Champasak Province, Laos

Champasak (or Champassak, Champasack – Lao: ຈຳປາສັກ [càmpàːsák]) is a province in southwestern Laos, near the borders with Thailand and Cambodia. It is one of the three principalities that succeeded the Lao kingdom of Lan Xang. As of the 2015 census, it had a population of 694,023. The capital is Pakse, but it takes its name from Champasak, the former capital of the Kingdom of Champasak.
Restaurants in Champasak Province 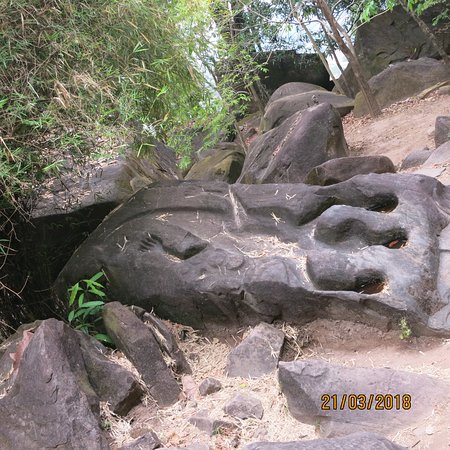 The religious complex of Vat Phou, a combination of Khmer architecture and Hindu religion, is located at the foot of Champasak Mountains, with the Phou Kao (the sacred mountain with a natural form as a Linga - symbol of Gof Shiva). This complex was built during the first part of the 11th century, with some additions and reconstructions in the 12th and 13th centuries. Some inscriptions belonging to the fifth and sixth century AD do mention a sanctuary built on the hill, together with the foundation of the city, but this building has disappeared and was replaced by the religious complex that we see today. A museum and interpretative room should be visited on the site. Vat Phou is on the list of Unesco World Heritage since 2001. The archeological restauration/conservation of the site is managed by Vat Phou office. The tourism management is managed by Yingchokchai Company, which provides to the tourists quality services (shuttle, toilets, handicrafts shop, coffee shop, wifi, parking...).

This World Heritage site was a half hour tuk tuk trek from the River Resort. Go as soon as it opens because the place is hot. Access to the base of the ruins is by shuttle, and this is welcome. Then there is a kilometre walk along pools where water buffalo float. The first Terrace of ruins are easy to navigate, and after that the climb starts.
It is as far as we wanted to go. The excellent museum was enough for us. Bur we met many others who went to the top,and loved it. Having seen many Waterfalls and so many which disappointed, this was different. Not only has it been beautifully worked for tourists to see the best areas, whilst keeping it totally natural, there is a special feature which is not realised until you are there. The waterfall is of course the Mekong flowing through and across the island, and at one point you can clearly see how the river itself is higher than where you are standing. It's a very odd view when you look up at the river. So worth a visit. 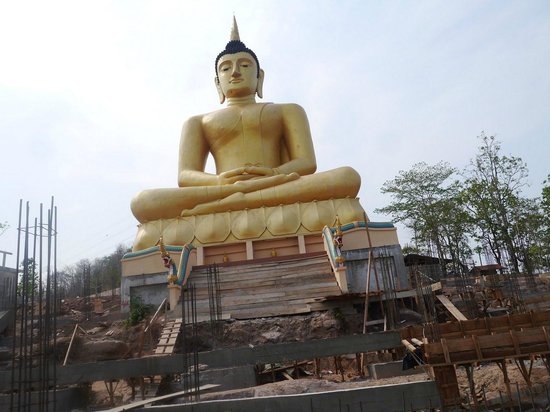 We rented a car and decided to drive up instead of climbing the stairs, went to the main temple for prayers and blessing by the resident Monk. Thereafter, we through the Avenue of Buddha (lots of Buddha statues arranged on a slope steps.
The big Buddha sit majestically on the side and face the Mekong River and Protecting Pakse town. Great photo opportunity. 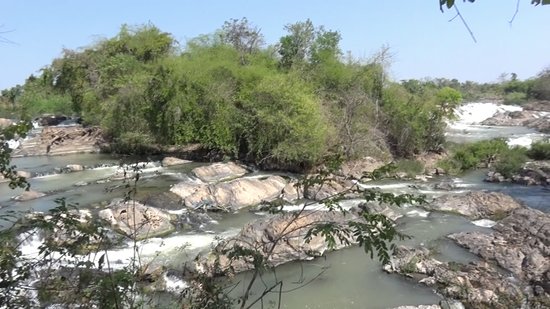 My husband and I spent a week in Don Khone. First impressions, as with many parts of Asia, is that there's a lot of rubbish around.....but if you can look past that....this island is still a great place to kick back, relax and enjoy doing not much.
We hired scooters to explore Don Khone and Don Det. As many others have noted, Don Khone is much less hectic than Don Det, so we were pleased with our choice here. After the raining season, the roads were rather boggy but this wouldn't normally be a problem at other times of the year. 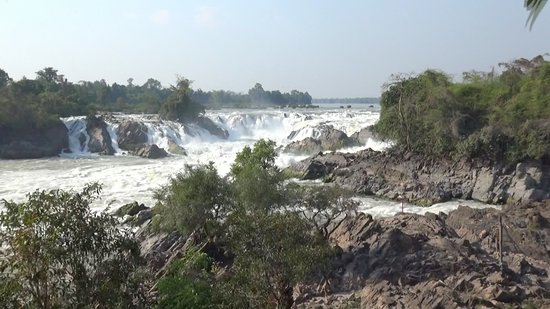 Khonephapheng Waterfall is the great sight seeing in Laos, The waterfall is the biggest waterfall in southeast Asian, People call the Niagara of Asian. The final destination in the Southern Laos before exist to Cambodia. Tourists also can visit of Irrawaddy Dauphin, 4,000 Islands and Lhi Phi Waterfall from here, the place has the Lao best coffee shop. Tourists can shop survivors, eat local food...

A very interesting site with lots of photo opportunities. The falls are well worth visiting even though the inferstructure is a little run down. A good tidy up woild make them so much better and the addition of signposting would also help. 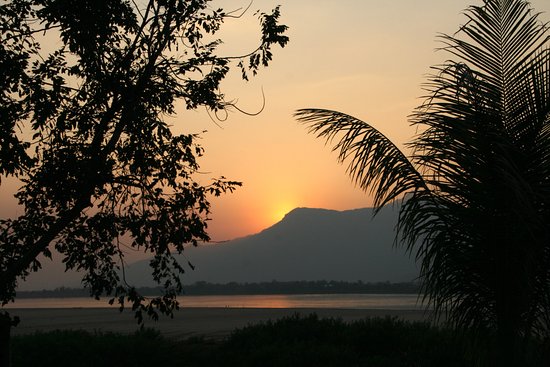 We took a boat from our champasak hotel to Don Daeng The boat ride was the best bit.It is a very quiet island with not much too do.You can cycle around and take short walks as it can get very hot. There are a few small cafes and home stays as well as a hotel .From the beach you can get good views of the Mainland and Mountains. Do wear shoes as the sand can get very hot.We have been before and noticed the children started to ask for money for photographs. It brings the laid back island into the real world which is a shame in some ways. 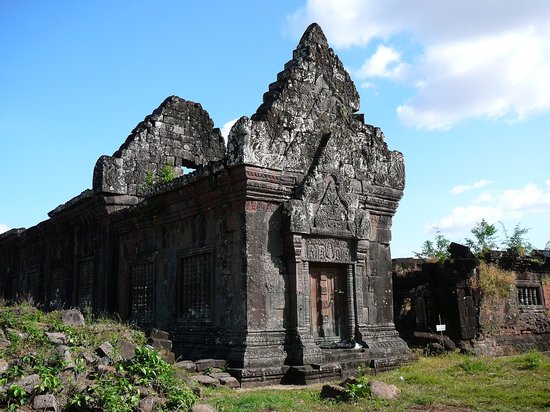 Khmer temple complex dates back to the 10th-14th centuries and offers magnificent views.

After seeing Angkor Wat and other temples in Cambodia this was a bit of a disappointment. It is historical in that it was built first i understand but the reconstruction taking place throws off the whole idea of being authentic.
The climb up the mountain was too much for me so i stayed down while the others went up. We wanted to see if it was worth adding to he tour and it was not. Go to other things in Laos not here. 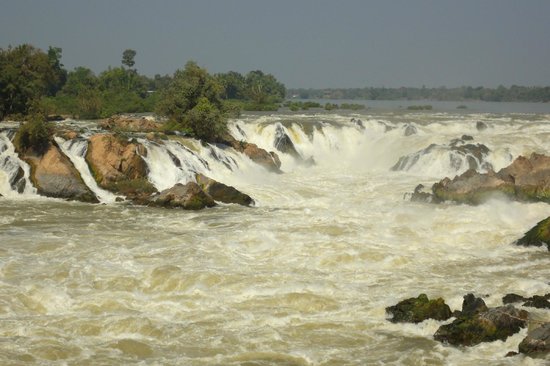 Khonephapheng Waterfall is the great sight seeing in Laos, The waterfall is the biggest waterfall in southeast Asian, People call the Niagara of Asian. The final destination in the Southern Laos before exist to Cambodia. Tourists also can visit of Irrawaddy Dauphin, 4,000 Islands and Lhi Phi Waterfall from here, the place has the Lao best coffee shop. Tourists can shop survivors, eat local food...

Whilst this is called a waterfall it's more very extreme rapids but still very impressive and well worth the trip. Very glad we went.
The viewing points are good and it was not at all crowded so we could get good shots wherever and whenever we wanted to. 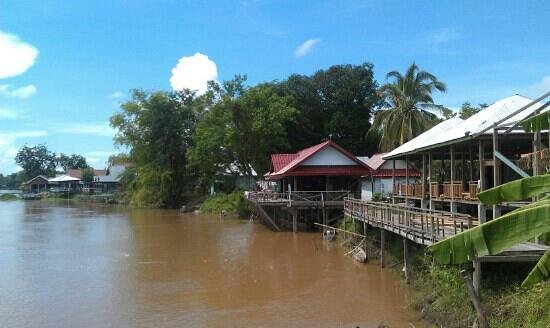 We enjoyed our three days on Don Khon. We walked to look at a waterfall, it is quite spectacular - the massive amount of water rushing between all the rocks! Went on a boat trip to see the dolphins. Didn't see any. Supposedly there are only 5 left and unfortunately I don't see them lasting too much longer with all the fishing nets and rubbish in the water. We hired a couple of bicycles and pedalled our way to Don Det, it was a lovely ride. We spent the rest of our time just chillin' out. Nice. 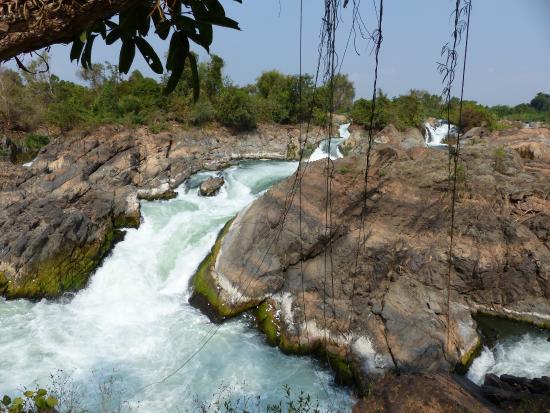 A must see if you are in the area, this is a national treasure! Nothing like it that I have ever seen, it feels like planes of Waterfalls coming from so many different directions very unique!
The only draw back is that they should use some of the ticketing fees to employee people to remove some of the eddies of garbage that swirl around, this treasure should be kept pristine.