The 10 Best Things to Do in Bologna, Italy

While crowds of tourists fill Venice, Florence and Rome, Bologna remains relatively quiet in comparison. This medieval university town is charming, historic and fun to explore… and you'll find Bologna's local cuisine is light-years away from the American deli meat bearing the city's name.
Restaurants in Bologna 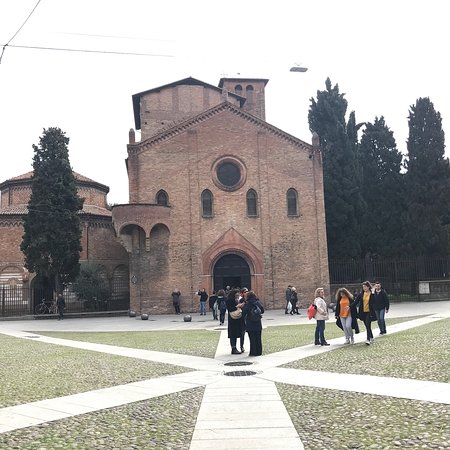 Considered as the oldest church in Bologna, built on the ruins of a pagan temple, this basilica is a bit of the tourist path. The bishop of the city at that time (5th century), San Petronio, ordered a building to be built which was planned to be divided into 7 churches later and to resemble the Holy Sepulture church in Jerusalem. He was even burried in one of them before his bones were transfered to the basilica bearing his name now. At present days only 3 of the churches remain (all of different age) but the complex is still impressive with its courtyards, buildings, cloisters and a convent. And a little mysterious as well. In the Church of Saints Vitale and Agricola, the one with the simplest structure, are the graves of the two saints.
The small square in front of the complex has a nice small coffee shop and a restaurant.

It is really impressive. If you know about this story, it is something that will break you heart. The atmosphere is sad and it gives you the opportunity to ask several question to yourself.....excellent. 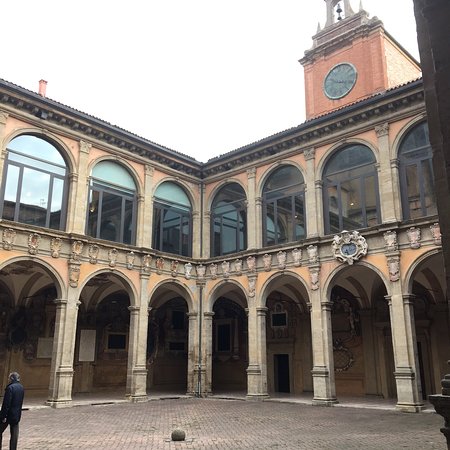 A great piece of history and well worth visiting the theatre which is what it is most famous for. We went on a guided tour, but would have liked more time to look around. 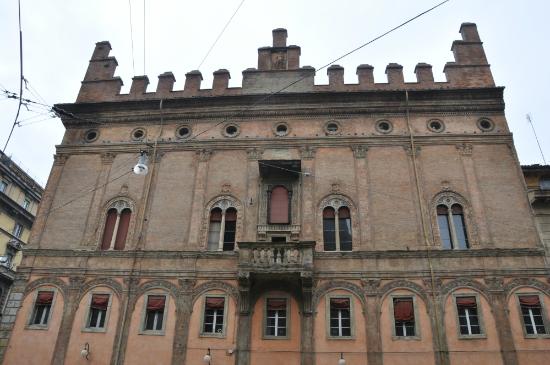 Reviewed By Jurgen B - Brussels, Belgium

We preferred the sights of Ravenna but the streets of Bologna, and this quarter is the nicest part of that. 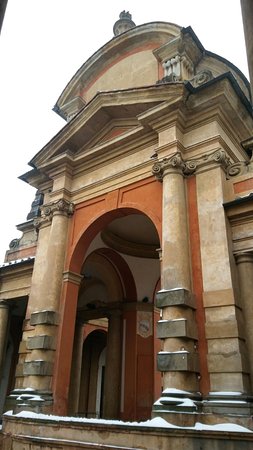 Portico di San Luca is the magnificent 3.8 km long covered walkway which connects Porta Saragozza to the Santuario di Madonna di San Luca. Built in 1674-1793, there are 666 arches. Walking beside Via Saragozza the portico walkway is basically flat, it is not until you reach Meloncello Arch that the walkway takes a steep climb up the hill to reach San Luca. We saw people of all ages making their way up and it is regularly used by some locals for their exercise routine.
This was our second visit walking along the portico up to Santuario di Madonna di San Luca, both times exhilarating and etched in our memories.
There are small local stores, a gelateria and cafe/bars along the section of the portico from Porta Saragozza and Meloncello Arch which makes for a good place to stop on the return down from San Luca. Read about this church on TA. Entrance to church is free but you have to pay 3 euros to see The Lamentation over the dead body of Christ and the Oratory. Well worth it. The details of the terracotta sculpture is incredible. Especially the figure of Mary Magdalene. You can almost 'hear' her. Just off the main piazza, easy to find. 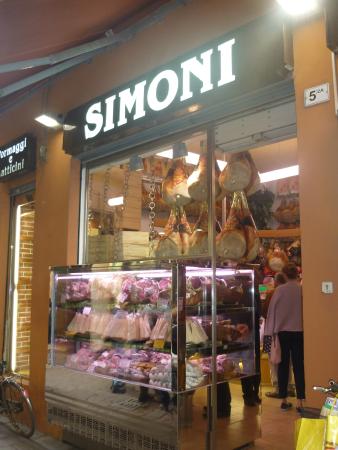 Local meat, cheese, wine, olives and bread. To buy, taste and eat in a great atmosphere. Served by passionate staff. You're lucky if you can find a free table here! 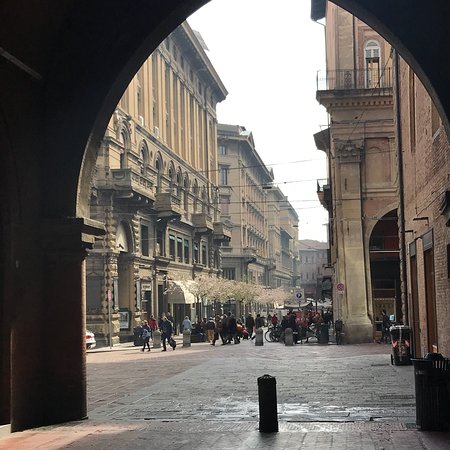 I visited the Piazza Maggiore with friends and business colleagues two evening in a row, one of them bring St Patrick’s Day. We had two wonderful evenings with delicious food and abundant alcohol. I consider the bars and restaurants in, and around, the Piazza Maggiore to be among the best that can be found in Italy.
During one of the days, I strolled around the square and took in the impressive architecture. I also sat at a table outside one of the bars and enjoyed a strong coffee and pastry and soaked up the atmosphere.
If you are in Bologna then a visit to the Piazza Maggiore is something that you mustn’t miss. 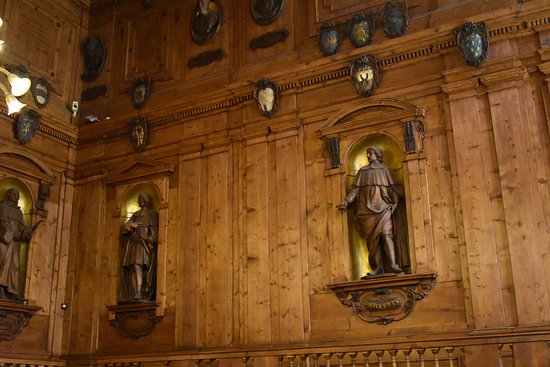 Family crests abound at the entrance to this great building, tucked away off the Piazza Maggiore just before entering the Piazza Galvani. Astonishing history and beautiful anatomical theatre, the students of the great families who studied here were so fortunate. So many early statues of the human form and the musculoskeletal detail are awesome as are some of the items on display. Come out of this theatre and on the way to the library (lecture hall) take a look at the medical books dating back years all in handwritten copperplate/script and displayed in glass cabinets along the corridor. The Lecture hall again is a big hit, the sheer history and expense of the decor and the figured coats of arms astonishes the senses, the wealth of these patrons must have been exceptional. Great visit. 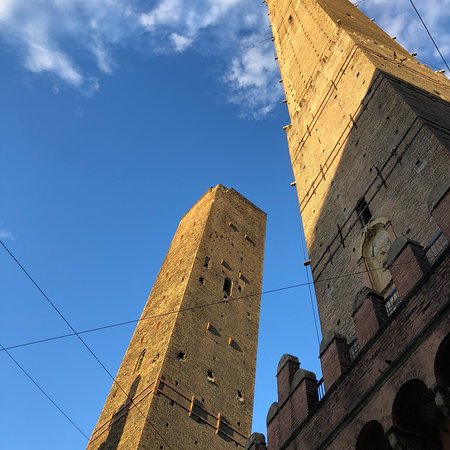 The colossal towers were built by Bologna's important families in the 12th century.

A long walk up more than 450 steps does reward you with the best view of central Bologna. Pre-booking is essential and a very clear timed visit.