The 10 Best Things to Do in Aguascalientes, Mexico 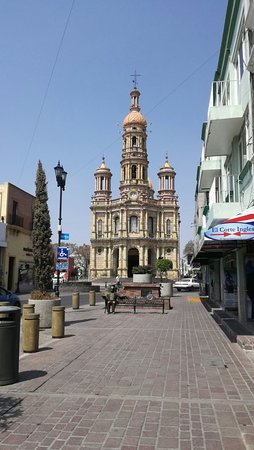 A friend of mine was married here - so it holds a special place for me and for him. The outside and inside are worth the visit - it is not as elaborate as many churches in Mexico but still worth the visit. 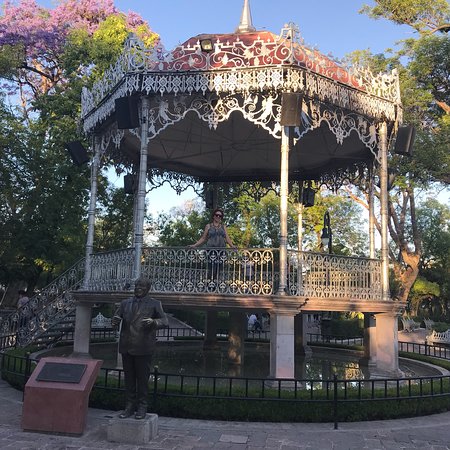 Considering the fact that Aquas is everything else but a tourist spot, this is a nice little square with lots of green in the center of the city. For Aguas excellent. Compared to Gardens or Parks in Mexico City or Querataro just nice. Go there if you are close to it any way. 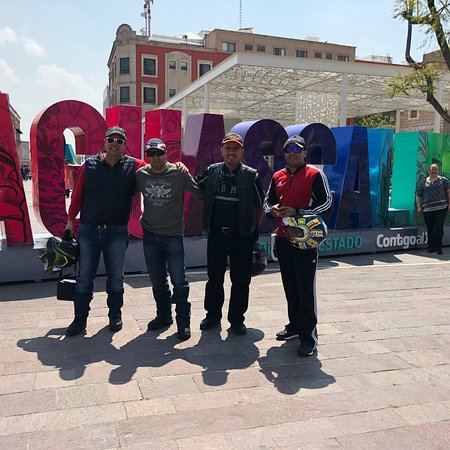 This Cathedral was built in 1704, 311 years ago. Started by Spanish Missionaries, Aguascalientes was founded as a small mining settlement during Spanish Conquest. These kind of Cathedrals were the symbol of the Spanish Crown Power of those days. Beautifully decorated with New-Hispanic baroque imagery, is the religious center of Aguascalientes City. Recommended to first-time visitor by locals. It's a priviledge to have plazas like this one! It's part of the core declared World Heritage Site by the UNESCO as part of the Silver route. The Historic Ensemble of the City of Aguascalientes, from this plaza to the San Marcos Garden and Church 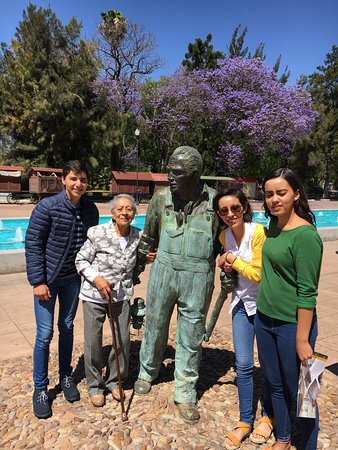 Located about a 20 minute walk from Centro Aguascalientes, the Plaza de las Tres Centurias is a tourist complex built around remnants of the railroad industry. While it has park-like elements, it is more like a large outdoor historic site, rather than a park. Many of the attractions posted in traveler pictures were not open or available when I went in July. I'm not sure if this was temporary, but if not, I don't think kids would be very interested in this site. I did not see a park train ride, nor could I enter the train model, or the cargo exhibit hall. Nevertheless, if you like trains and history, there is much to see here if you have the time. The park highlights three centuries of railroad development: the 19th, 20th, and 21st centuries.
The modern focus of this park features a large park area with a sports complex, grass and sports fields, concrete paths that line the park, and park benches. Although there are trees, shade is not plentiful here. The weather in Aguascalientes is mild year-round, so it isn't much of an issue, but in July, I definitely felt the power of the sun's rays as I walked around. (*A more lush and garden-like park to visit would be the Jardin de San Marcos)
To the left of the sports complex, lies a huge concrete building which appeared to be some kind of cargo exhibit center. The day I went, they were setting up for a concert inside the building, so it was closed to visitors. Peering through the windows, it seemed to contain large, heavy machinery on display, most likely steam engine pipes and parts. A few railroad wagons are placed in front of this building, and an old train engine sits on a bridge near a black stone wall which rises dramatically from the large concrete patio. Writing and a picture of a train is etched on the wall, but time and neglect has faded and chipped its surface, and the writing is no longer legible. The train image was so poor, I didn't even take a picture of it. The old train depot (the second one) has been renovated into a library and dance center, and in a building nearby, a group was practicing folklorico dancing.
The section across the street is more dedicated to the history of the early locomotive and the railway's influence on the culture of Aguascalientes. Here there are more sights for families and kids. The entrance is free, and there is an information booth (spanish-speaking). This outdoor complex is well marked with signposts, directing you to the various sights and activities. A well-maintained locomotive, The Hidrocálida, is on display amid a long shallow pool with Fountains. There are a few bronze statues nearby depicting railroad workers and their families.
The original train depot has been renovated into tourist traps, and below it is a shaded food court area and small cafe serving coffee and a few menu items out of a renovated train car. On the station platform, an old passenger car displays its original furniture and red velvet seats. Some travelers have posted pictures inside this car, but it was not open when I went. I could only peer through the dirty windows of the car.
A small park within the historical section (within the Tres Centurias park) features large, green trees which shade a few paths that wind among bushes and statues of prominent historical figures of the railroad. In the center, is a rectangular Fountain with a Dancing Water show every few hours. Be sure to ask for the times at the information booth. The water was murky, and I was dubious that the show would be worth seeing, but the man at the visitor's booth kept reminding me what time the show would start - 2:00! - (though it didn't actually start until 2:15), so it was important to HIM that I see it. It's no Vegas Fountain show, but I did enjoy it. The water is choreographed to warbly, distorted music, and there isn't any colored lighting, but it is programmed well, has several different spurts of varying heights and patterns, and often shoots up to an impressive 12 meters. Worth seeing if you are there. It's free.
In the back of this park, you can see The Monumental Clock, built in honor of workers in the Roundhouse. A giant flagpole displays a 17-meter flag 30 meters high. A small museum features a photo gallery and displays of the development of the railroad. Entry is 5 pesos, or 30 cents.
In sum, this is a good place to visit if you have a few hours to look around and a keen interest in history. If all of the exhibits are open, and the train is running, kids would enjoy it. If not, you're probably better off visiting the interactive museum of science, or the indoor mall with an arcade / play area near the Plaza de Toros. Otherwise, the nearby mountain ranges offer a variety of outdoor activities, such as hiking, camping, ziplining, or swimming in the hot Springs.
Hope that helps! Enjoy Aguascalientes!

A recreational, cultural and historic space, built on the grounds of the Old National Mexican Railroad Station. In this park we find the “Dancing Water Fountain”, the Rail Road Museum and the Mural “La Maestranza”, and the “Antigua Nave de Locomotoras” Exposition Center.

-free to wander, large, historical
-train depot and old models on one side, bldg with train equip was closed, setting up for a concert
-Old station renovated to dance school
-across the street is oldest century with stream locomotive model
-info desk
-clean, free bathrooms w/ tp and soap
-restaurant
-fountain show at 2:15
-small museum 5 pesos

I learned a lot at this museum, and I would have stayed there so much longer as there is so much to see! I loved that there was a lot to read about the history of Mexico and how the way people view death changed depending on the influence of different religions and cultures. It is definitely worth a visit to understand the Mexican culture better: I found it fascinating and I would like to visit it again! The people there were very helpful too, and there was always someone at the exit of each room to tell you which room to visit next!
Muchas Gracias! :-) 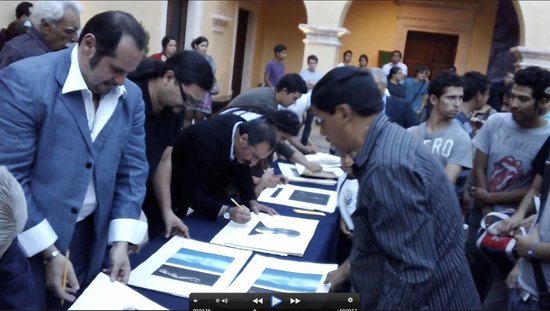 This museum displays the work of José Guadalupe Posada, a famous local artist.

This museum is designed in an interesting manner where you wander through the gallery.
Unfortunately there was no English in the descriptions but art does not need language.
I would think that it would be worth making a small handout in English to introduce this artist. 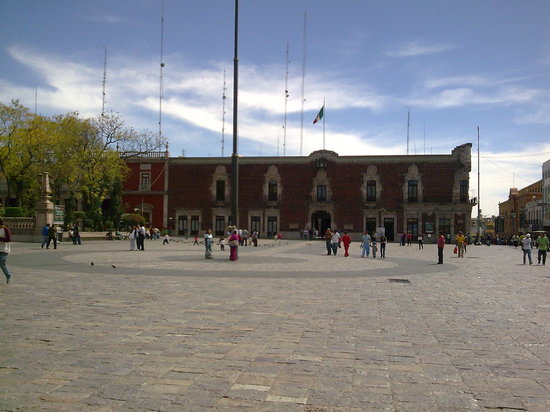 It almost seems to required that important governmental buildings be decorated with spectacular murals, and this one was no exception. (Copying Mexico City maybe?) I found Aguascalientes to be a bit drab; these murals were not! 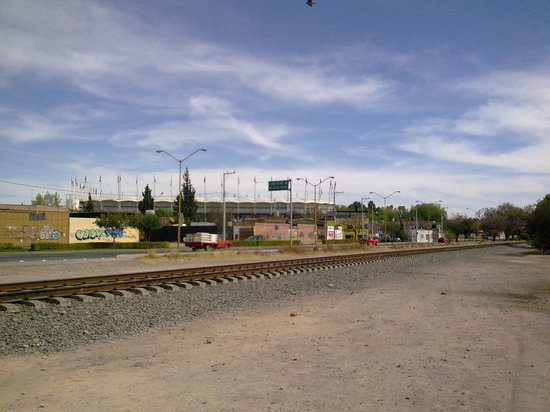 Once a palace, this museum is now a gallery for Zacatecan artists.

I found this museum while walking along a beautiful street. The museum has artifacts from the history of Mexico. The guides are polite and will answer any questions. They are always happy to give a tour and explain the items in the museum.
One thing I found entrancing about this museum was the photographic exhibit on "La Muerte Nina". Their specialized exhibits are great, unique.
Sundays the Museum is free, closed Mondays, all other days it is 42 pesos.
Wonderful museum housed in a building that in itself is a museum to study and admire the architecture.