The 10 Best Things to Do in Afton, United States

Afton is a town in southwest Ottawa County, Oklahoma, United States. The population was 1,049 as of the 2010 census, with population growth stemming from the near abandonment of nearby towns of Cardin and Picher because of ground contamination sites by local mining quarries. The town may have been named for the Scottish River Afton.
Restaurants in Afton 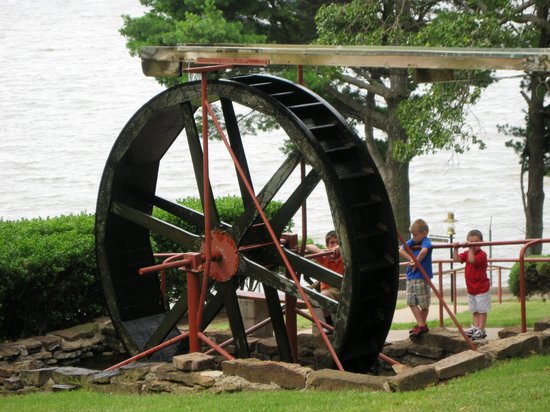 HAR-BER VILLAGE MUSEUM is a seasonal (third Saturday in March thru first Saturday in November) pioneer-era village and history museum located on the shores of Grand Lake o' the Cherokees in Oklahoma. Visitors experience the area's history and ecology through self-guided tours. Antiques, collectibles and reproductions are displayed in exhibitions representing the mid-1800s to the early 1900s in the local four-state region (Oklahoma, Arkansas, Missouri and Kansas). Several of the Village's HISTORIC BUILDINGS were relocated to the grounds, including a schoolhouse, jail and 16 log cabins. Other log structures were built to house collections and are typical for the mid-to-late 1800s-a courthouse, a bank, a stagecoach inn and a church built with bricks hand-made before the Civil War. Other replicated buildings include a mercantile, jail and hanging gallows, a doctor's and a dentist's office, print shop, post office, drug store and more. Haven't been to Har-Ber Village in a while? EXHIBITS have been recently renovated and/or relocated, HANDS-ON ACTIVITY STATIONS added (Kid's Cabin, Nursery, School, Jail, Saloon), and frequent WORKSHOPS, events and historic craft and trade demonstrations have become a part of Har-Ber Village's offerings (blacksmith DEMONSTRATIONS, spinning and weaving demonstrations and historic craft WORKSHOPS.

Lots of history divided up into many small cabins and a few larger barns. There is so much history packed into this museum it is almost like 'information overload'. Harvey and Bernice Jones whose collections started the museum did a fabulous job.
I very much enjoyed the history presented in the earlier buildings, taking my time to read and explore. But with 101 stops it became a challenge to see and read it all, and later exhibits also did not focus on a particular time period. Some of these exhibits just gathered up an assortment of similar type items, spread over many years, and so the latter part of the museum/trail lacked a cohesiveness with the earlier part of the museum. In the end I was just looking and moving on as I had become tired of reading so much.
The grounds the museum is located on are beautiful, and although there is a lot of walking, it is quite enjoyable. I spent about 3 hours here, but if you want to get everything you can out of this museum, allow more time. 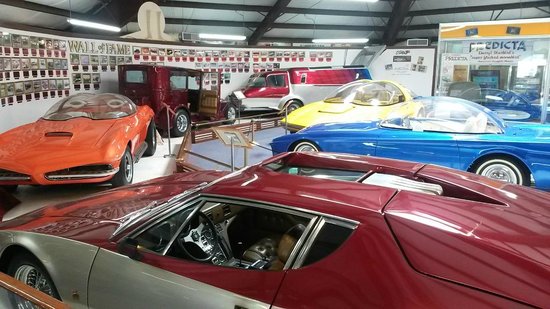 The National Rod and Custom Car Hall of Fame Museum is set up as a national nonprofit foundation and is a nationally recognized tribute to the leading street rod and custom car builders throughout the country. Over 50 one of a kind full size exotic vehicles on display including works from Barris, Titus, Roth, Posies, and Darryl Starbird, one of the most prolific custom car builders of all time, has twenty five of his own creations on display. Automotive artwork and 1000's of photographs and auto memorabilia displayed throughout the ultra modern museum.

Nobody goes to Afton, OK by accident. You either go there for the lake and resort, or you go there to visit the Starbird Museum. He is called the King of Kustom Kars for good reasons. It's a little way west of Joplin, MO and...MoreGoodness, thank you for your kind words, and so happy you enjoyed the museum. We have tried hard to make it interesting to every one that visits here. There is a lot of talent within these walls and I see that you really appreciate them. 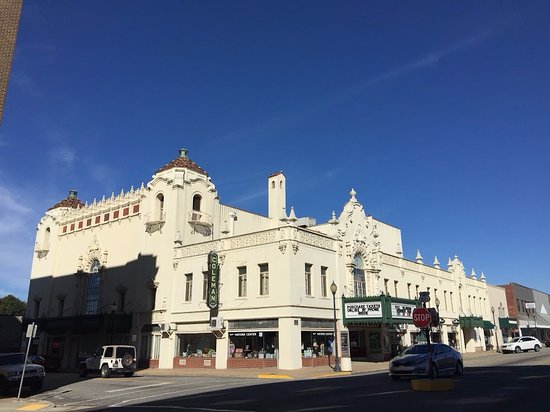 The tour was so much information about the men who performed here and the women who left let their mark on stage. You can just imagine the Era while viewing this time capsule in Miami, OK. We were fortunate enough to meet two gals who brought this magical art back to the public.

Two of life’s great pleasures are travel and wine. Historic Route 66 & the I-44 Vinita exit is the setting for the tasting room, winery and meadery. The sound of music welcomes you, and the gift shop offers wine accessories and gift baskets. Enjoy tasting a delicious range of our Made in Oklahoma wines and meads from dry to sweet, white to reds produced, blended and bottled right here in our cellar.Like most Oklahoma wineries, visitors will enjoy a friendly tasting room atmosphere where we help make choices easy for the casual wine drinker. We especially welcome Historic Route 66 fans to the home of Route 66 Red Wine.Wine and dine in the winery Bistro - Grapevine patio or indoor dining - known for great food, wine, and service in a relaxed setting. Our staff wants to get to know you and will greet you warmly.

The wines were ok, the meads were actually much better. Smuggling some of them home in my luggage. Very nice lady behind the counter; she wasn't the winemaker but was able to describe their business and their wines quite nicely. I stuck to the dry stuff; I can't really comment on their sweeter wine offerings.

We launched our boat on May 2 at Bernice State Park. The lake was a few feet high so launching was fairly easy. I still had to take my shoes and socks off and roll my pants up to wade out to get in the boat. Same thing when we returned that evening. When the water is low, I assume launching a boat will be more difficult.

On the bright side, we fished around the bridge that is just yards away. We caught several sand bass and crappie over 10 inches. 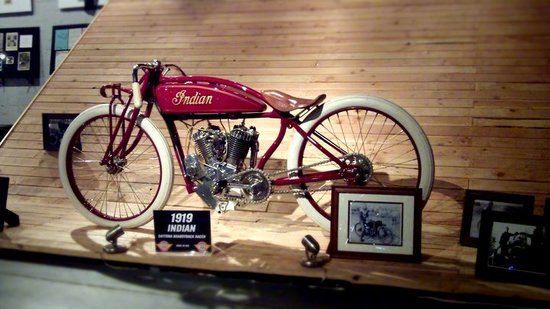 On our route 66 adventure we stopped in to the Vintage Iron museum. It had less than expected and not such a big range. It's main feature is the amount of information about Evil Knievel, his exploits and the damage he did to his body. I am an Indian fan and there was a display but not very inspiring. There is quite a large display of old style helmets and the shop does have some nicer bike stuff for sale.
A quick stop only if you are driving by and want to add another route 66 experience. 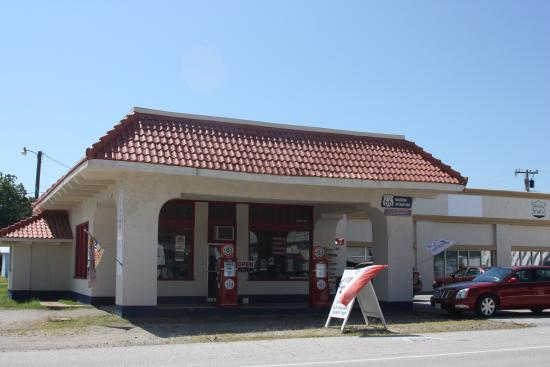 The Afton Station Packard Museum is a great Route 66 stop. It is not large - less than twenty cars or so. The Packards are unique and in near pristine condition. The 1934 V12 is probably worth a quarter million or more. Fee is only $5. The Museum also has a lot of automotive memorabilia. I applaud the owner of these great cars for sharing with the public. I also commend him for fixing up the old garage and restoring this piece of history. It is deplorable that many other building owners in Afton have allowed the buildings to fall into disrepair. Once these buildings are gone, this piece of Americana will be lost. 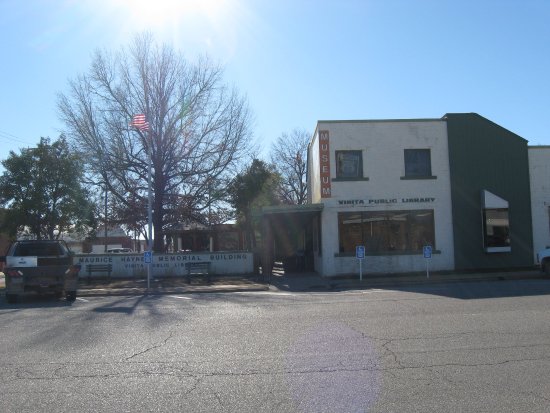 The Eastern Trails Museum is located one block off of Route 66. You can't tell by looking but the museum and library are in the old Coca-Cola bottling plant. A new curator has done a marvelous job of sprucing the museum up with colorful displays and attractive exhibits.

Vinita has had a lot of history. Will Rogers when to school here and Gene Autry worked here. Cattle drives came through the area, Route 66 is the town's main street, Civil War battles were fought nearby, the first airplane to land in Oklahoma landed in Vinita.

The museum has exhibits on the railroads, schools, Route 66, the Civil War battles at Cabin Creek, cowboys, cattle drives and ranches and much more. Vinita is in the Cherokee Nation and there are many Indian artifacts and crafts on display. Like all small town museums there is a general store and an old time kitchen. There are many items out in the open so you can touch history as well as view it.

Admission is free. Everyone working here is friendly and talkative. If you ask, they will give you a guided tour. 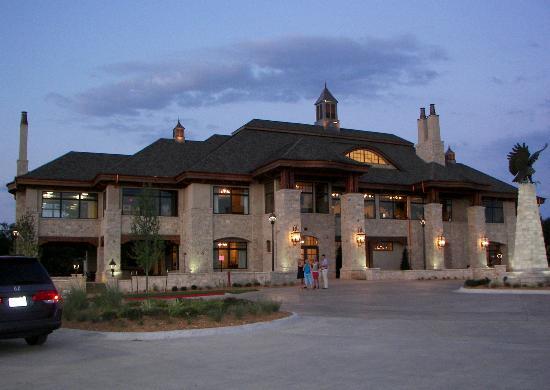 Came here for a law firm retreat with about 100 attendees. The hotel is very nice, with a beautiful pool area & 2nice restaurants. Conference facility nice as well, easily could host 150 seated at tables of 8 or larger crowd standing. Golf course redone,...MoreThank you so much for your positive words and time spent here at Shangri-La! We hope to see you soon! 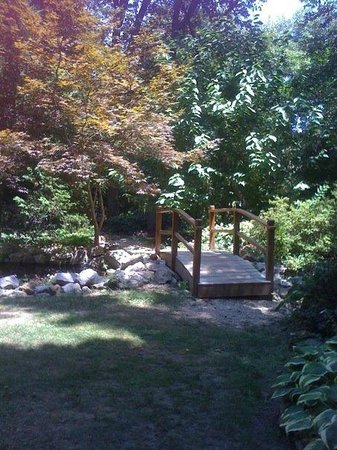 A nice garden with a number of other architectural things intermixed with the foliage and flowers. Went with wife and two daughters (10 and 3) on a summer morning in June. Most everything is outside, which is to be expected being a garden, but there's plenty of shade from the trees and some pavilions. A number of different areas throughout the garden, which offers a nice variety of things to enjoy. Our younger daughter especially enjoyed the koi pond and fish. Older daughter enjoyed taking pictures of the different flowers with her camera.

Was a little disappointed that there wasn't more flowers and such to see during the visit. We were there in late June, so might be worth visiting earlier in the year to see more during the springtime. Place is well maintained, but we didn't see any grounds staff there to be able to ask questions or get information.

Admission is by donations (suggested $5 per adult), and tours are on your own, so can be as long or short, quick or as leisurely as you like. Worth visiting but wasn't one of our favorite stops.