The 10 Best Things to do for Honeymoon in Upper Bavaria, Bavaria 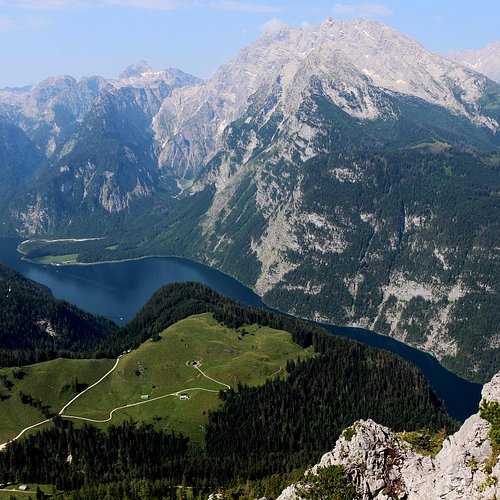 Germany's only Alpine National Park Lofty, wild and majestic, "King" Watzmann (2713m) reigns over the Berchtesgadener Land as he surveys his kingdom: Berchtesgaden National Park. High mountains, deep valleys and crystal-clear alpine streams define this protected area bordering Austria. "Allow nature to remain in its natural state" is the motto of Germany’s only Alpine National Park. Berchtesgaden National Park is located in the southeast of Germany, in Bavaria and adjoining the Austrian Salzburg region. Founded in 1978, the park includes an area of 210 square kilometres and is owned by the federal state of Bavaria. In addition, the park is the core and buffer zone of the biosphere reserve Berchtesgadener Land.

We parked in the car park opposite the museum, which was only €1 for two hours. Entry to the museum is crazy value for money at only €4/adult, which is discounted further if you have a Berchtesgaden card. (However, there is a minimum spend if you wish to pay by card). We had the whole museum to ourselves for our entire visit! The staff (and reception bear!) are friendly and the exhibition itself is informative, surprising, interesting and captivating; it held our attention for a good hour. The displays have captions in both German and English (which I realised after slowly trying to translate the German!!) Haus der Berge is far more than stuffed exhibits; the animals and birds are arranged with real thought to add interest, it's hard to spot everything the first time you look! This, combined with the bitesize information makes natural history exciting! The tunnels section with torches is inspired! (Do mind your head though!!) Any nature lover will enjoy! 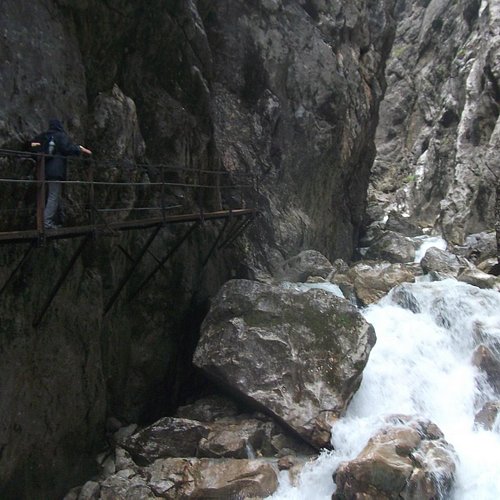 I think an important thing to know about getting to the entrance is that it’s a bit of an uphill hike. Not a difficult hike but you just don’t arrive at the entryway via a short walk from the parking area. Prepare to get wet along the way. I didn’t get drenched but I definitely should have worn a raincoat. The trail itself is well kept while in the canyon and tunnels. It can get somewhat crowded but it wasn’t uncomfortable for me. It could be loud due to the roaring water. Once out of the tunnels it was about another 20 uphill minutes to the restaurant at the end of the trail. The restaurant had clean restrooms. The view of the glaciers is amazing. Another import thing to know is the hike to the gondola isn’t easy and somewhat intimidating. My friends and I hiked to it and we saw a lot of inexperienced hikers struggling. If you plan on hiking to Alpspitz ensure you have plenty of water and food.

I wanted to just stay there looking at the beautiful scenery around. The climate was very good during our visit and we enjoyed the outdoor experience of just walking around the lake soaking in the beauty of nature. 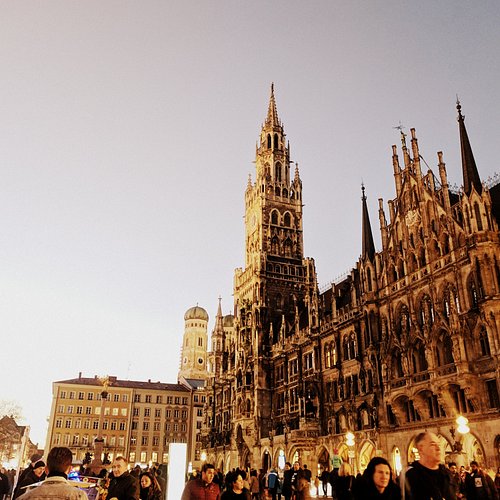 This prominent public square, the largest in Munich, still stands as the center of social activity in the city, much as it has throughout history.

We were lucky to visit Marienplatz during Christmas, so we could experience the magical part of the decorated tree, the Christmas market with all its colorful displays of baked goods, toys, gluhwein. It's a busy place in the heart of Bavaria, reflecting new and past, mixing old architecture and modern shopping malls. Bustling atmosphere, a sea of tourists and locals create a unique vibe of hospitality and generosity of Bavaria. 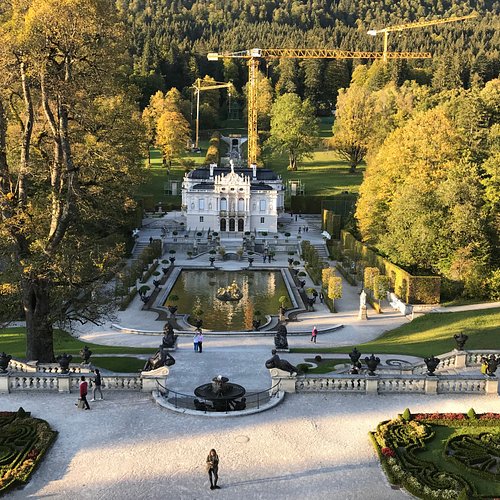 A bizarre, yet glamorous, castle built by King Ludwig II.

Ludwig II's admiration of Louis XIV was played out here in a spectacular fashion. Sumptuous furnishings and decor with gold leaf everywhere in a series of splendid rooms all within a jewel of a building and a lovely setting. Must be seen. 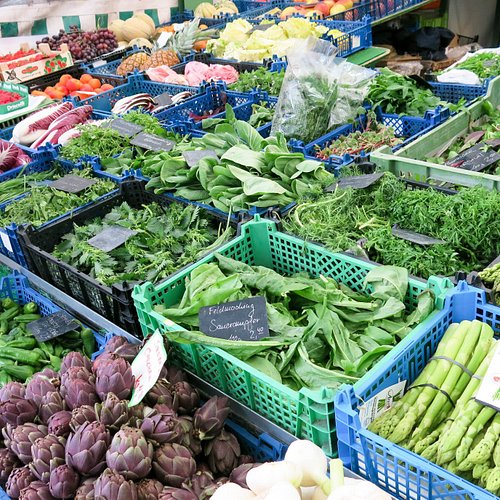 The city's largest and most famous outdoor marketplace.

Great market place in the city center where you can find various food, fruits, vegetables, chocolate, honey, and the tee decors before Christmas. 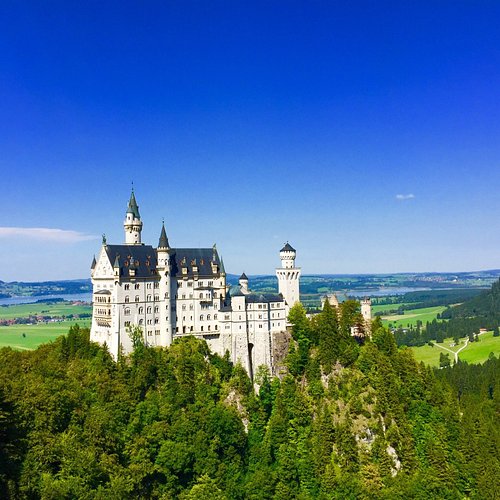 Yet another of the eccentric King Ludwig II's magnificently odd architectural creations.

You will be greeted at the entry to the little tourist shopping area where you will pay about 7 euros to park. From there you will walk to the nearby ticket office and purchase tickets for reserved tour times for one or both castles. This must be done on the day of your visit, and it's a good idea to get there early, since the time slots fill up rapidly and the number of people per slot is limited. Allow two hours between the starts of the tours if you plan to take the bus up to Neuschwanstein rather than walk, three hours if you walk. From the ticket office you will take a short walk uphill through a small shopping area with restaurants, hotel, a bank, gift shops, etc., following the signs to Schloss Hohenschwangau. It's best to see this castle first since it's the closest and the easiest stairway climb up the hillside. After this tour, which is about 40 minutes, walk back down to the nearby bus stop (you won't have trouble finding it) and purchase tickets at 2-1/2 euros each for the ride up the mountain stopping near Schloss Neuschwanstein, about a 10-minute drive and the buses run at 10-minute intervals. Or, you can use the walking trail if you’re in good shape, but it’s rather steep and long (about 40 minutes) and keep in mind that there are a LOT of stairs on the castle tour. The bus will let you off at a point with a very short hike to Mary’s Bridge (highly recommended if you’re not afraid of heights or rickety-feeling bridges), where you will get the best view photo view of the castle. From there walk back down to the bus stop and follow the signs mostly downhill to the castle, about a 10-minute walk. Taking the hiking path down from there after the 40-minute tour is easier than walking back uphill to the bus, since it’s all downhill. If you’re a serious German history buff and want to learn everything (and I mean Everything) about the history of the region, you can buy the museum tickets at the door. Don't miss the Linderhof Palace for jaw-dropping opulence while you're in the area. It's not as big as the castles, but the interior is truly impressive. 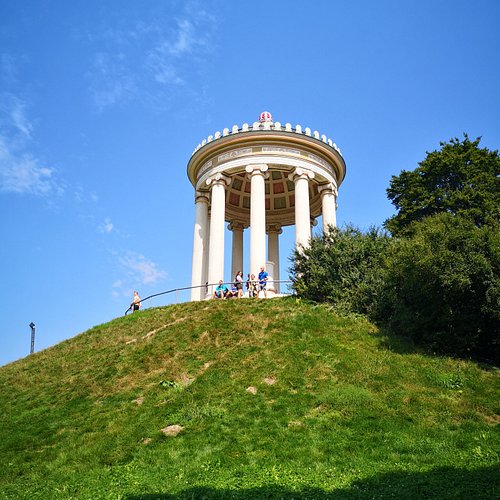 A sunny Sunday was the perfect day for exploring this beautiful park Loved watching the surfers, strolling along the tree-lined avenues and lunch near the Chinese pagoda At nearly 10,000 feet, Germany's highest peak is a popular ski area during the winter and a challenging hiking trail during the rest of the year.

My son and I were visiting my sister and family at Erlangen. We planned a day-trip to Zugspitze. So, it was my sister, brother-in-law, niece,nephew, my son and me. We were joined by my sister’s friend, her husband and daughter... We took the train from Erlangen to Nürnberg as early as 7am. We then took the train from Nürnberg to München and changed to another train from München to Garmisch-Partenkirchen. After that, we took the cogwheel train from Zugspitzbahnhof to Gletscherbahnhof located at the height of 2,588 metres above sea level. We walked to the south part of the mountain which is the Zugsitzplatt, a high ‘karst’ (formed from the dissolution of soluble rocks such as limestone) plateau with many caves. Three glaciers, the two largest in Germany namely, Northern Schneeferner and Höllentalferner and the third namely, Southern Schneeferner lie on the flanks of Zugspitze. The highest mountain in Germany, Zugspitze was named after the “Zugbahnen” or avalanche paths down the mountain’s notoriously steep north face and summit. Less than two weeks prior to this trip to Zugspitze in the German Alps, my husband, my son and I, had been to two more glaciers, Mt. Titlis and Glacier 3000 in the Swiss Alps. On both occasions, we had met bright, sunny weather. However, at Zugspitze, there was not the faintest sign of the sun. It felt very different and was indeed a welcome change to have good snowfall instead. It felt more like a Winter Wonderland than any other snow clad peak I have visited and I felt very close to Nature. We climbed as high up as the Church Maria Heimsuchung, which stands at the height of almost 3000 metres above sea level, defying sun, storm, wind and snow. I felt that this house of God, standing in solitude, like a sentinel in the vast expanse of snow, provides peace and protection to the skiers and winter sports enthusiasts during their visits to the glacier. On enquiring, I learnt that Catholic and Protestant Mass are celebrated on a regular basis depending on weather conditions. I felt deep reverence, not only for the Creator but also for this tiny little place of prayer as I stood high up in the snow clad mighty mountain with snow flakes falling all over us. The children had put in their snow suits and they paid no heed to the constant drizzle of snowflakes. They were busy swooping down on slides and toboggans; climbing up and sliding down again. We were constantly alert about making it back in time for the train, but we did not want to miss out on going to the Zugspitze summit. So, we made a dash for the Gletscherbahn cable car station from where cable cars runs every 10 minutes between the Zugspitz glacier and the summit. We barely had about 20 minutes to spend at the summit in order to be able to catch the last cable car down. So we rushed out being careful to remain on the German side It is said that on a clear day, four countries : Germany, Austria, Italy and Switzerland can be seen from the Zugspitze. However, standing in the Zugspitze platform that offered a 360 degrees view, we looked north, south, east and west; but it was too foggy and musty and there coupled with snowfall, the view was totally obscured and we could see nothing beyond a couple of metres. The only regret I felt was that we could not spot the famous golden summit cross. Given a chance, I would have loved taking a picture standing by its side. For our return, we took the aerial tram right upto Garmisch-Partenkirchen and trains to München, Nürnberg and Erlangen respectively. 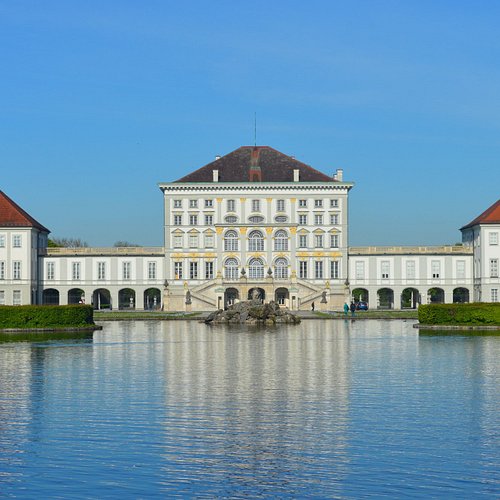 The palace is three miles from city and you can take the tram #17 (direction Amalienburgstrasse). Cost : combo-ticket 11.50 - main palace, garden (always open and free), plus extra small palaces as a hunting lodge Amalienburg, bath house Badenburg, pagoda and fake ruins. The palace is stingy on free information, you'll need the audio guide - extra 3.50 at your own language. Allow at least three -four hours (including travel time) to see whole the palace complex at a leisurely pace. The palace interior, while interesting, is much less extensive than Munich's Residenz. For 200 years, this oasis of palaces and garden was the Wittelsbach rulers' summer vacation home. It was here Ludwig II ("Mad" King, the last Bavarian King) was born and was christened the very next day in the famous Great Hall (it is really breathtaking hall) of the main palace. I was here a seven-year-old Mozart gave a widely heralded concert. Very worth to see the King Ludwig I's Gallery of Beauties. The portrait of his wife and mother of Ludwig II, belongs to this gallery among other 36 beautiful women. The park is huge and laced with canals and small lakes, where court guests one rode on Venetia-style gondolas. If you are there, visit hunting lodge, beautiful decorated Rococo style small palace located three hundred yards from main building) - it's the most worthwhile of the four small "extra" palaces - Amalienburg (see that topic)