Quechee is a census-designated place and one of five unincorporated villages in the town of Hartford, Windsor County, Vermont, United States. As of the 2010 census, the population of the CDP was 656. It is the site of Quechee Gorge on the Ottauquechee River and is also the home to the Quechee Lakes planned community initiated in the late 1960s, which also brought to the community the small Quechee Lakes Ski Area in the 1970s.
Things to do in Quechee 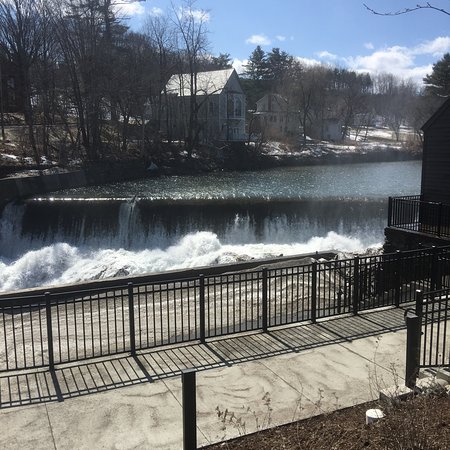 Simon Pearce Restaurant, recently voted one of America’s Most Romantic Restaurants by Travel and Leisure and Best of New England, VT 2011: Meal with a View, offers Creative American cuisine utilizing fresh local ingredients, thoughtfully prepared and attentively served in a classic restored Mill overlooking the Ottauquechee River. The staff motto is "quality without pretense." The dining room is casually elegant with views overlooking the waterfall and covered bridge. Recipient of Wine Spectator&apos;s "Best of Award of Excellence" since 1993, they offer a series of wine dinners monthly from November through May. They feature handmade glassware and pottery, which you can observe being made in their on-site glass and pottery workshop at The Mill. Enjoy their retail shop before or after you dine. Reservations are not accepted for lunch but are accepted for dinner. The restaurant will do their best to accommodate requests but does not guarantee any specific seating.

We stopped by for an early dinner without reservations and were happy to get a table out on the deck overlooking the falls. The view and cocktails alone were worth the trip, but the food was outstanding. The salads were fresh and delicious, and our entrees (one steak, one seafood) were both prepared just to our liking. Looking forward to another trip to Simon Pearce. 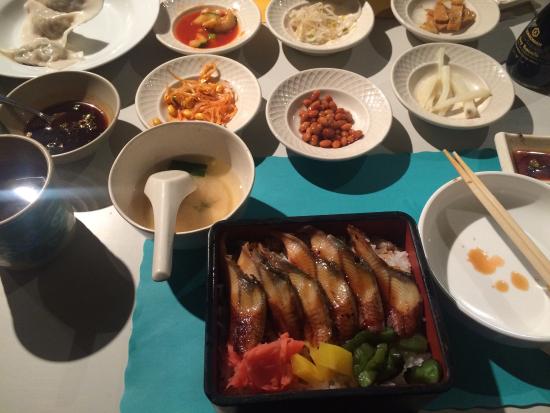 We found this place by reading reviews and enjoyed the dinner. The place was not fancy, but the food was decent. We went in at a very busy time, the receptionist was also in charge of taking phone orders, he was a bit impatient, but the waitress was very polite and responsive. Although the food was not on par with others we had at bigger cities, we enjoyed our meal. 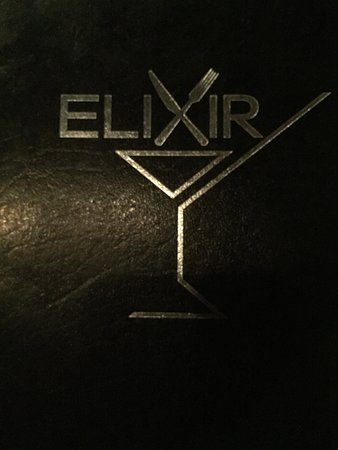 I have mixed feeling about Elixir. It strives for fine dining in White River Junction, Vermont. However, it comes up just short of four stars, even considering its locale.

Our table had the mussels and crabmeat stuffed calamari. The mussels were considered excellent while the calamari was imaginative yet left something to be desired. For main courses we had shrimp scampi, cocoa dusted petit filet mignon and veal saltimbocca. The veal was outstanding, a superb dish at any restaurant in the world. The scampi was ordinary. The filet mignon was tender but not especially flavorful. My wife ascribed it to the way in which beef is raised today; I ascribe it to kitchen failure. For desert I had a truly horrendous chocolate cake thingy while another in our party had an ordinary ice cream sandwich.

The restaurant itself is sparse which some might describe as minimalist. Our waitress was excellent, being both personable and interesting. Most importantly, she laughed at my attempted humor. In speaking with the owner, it was clear that he takes great pride in his restaurant and strives for excellence. Perhaps this review will assist. 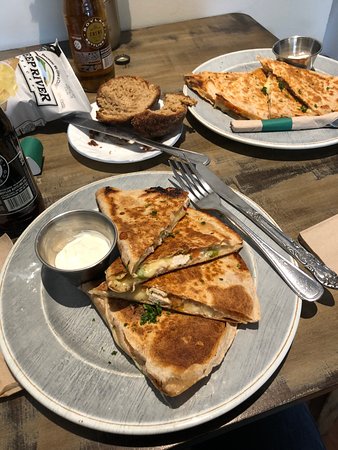 Reviewed By Andrea B - Newton, Massachusetts

A very nice cafe in the town center. Breakfast sandwiches were delicious- 2 fresh eggs- and French toast was perfect. They serve coffee and hot drinks in beautiful farmhouse pottery mugs. Pricier than what I normally spend on breakfast but very high quality.Hi Andrea! Thanks so much for the review! Happy to hear you enjoyed your breakfast (we're big fans of the French Toast too). Sam

I spent a few days in central Vermont shopping for local specialty items. I was so excited to find a Dunkin Donuts shop out here. Great coffee. Friendly staff. Awesome coffee.

Pat, the owner, makes this a warm and welcoming stop, not to mention the cakes, pies and cinnamon rolls warm from the oven. Pat studied baking abroad and has modified or created her own takes on popular items. If you like Moon Pies, she has created a delicious filling. Pies are baked twice a day so they are always fresh.

Prai’s kitchen is the “new kid” in West Hartford Center’s restaurant lineup and, as we ventured to find out, worth a try. Praia Kitchen is located at 23 LaSalle Road. Remember the address because Prai’s exterior does nothing to catch your eye; it’s just quietly there. In fact, subtlety may be the catch word for this place. Step inside and you soon aware of Prai’s gentle quietude...the easy-going, friendly staff; the easy on the senses decor; the pleasant music in the background. What about the food, though, John? The food is the star of the experience. Thai cuisine is Thai and the offerings are delightful; I took a shot and tried their salmon curry and it was very tasty. My wife enjoyed her Pad Thai and was amazed at the amount of shrimp; in fact, I made the sacrifice and helped her finish it.
Try this subtle little place, Prai’s Kithen, at 23 LaSalle Road in W.H. center. I think you’ll come away happier than when you arrived.

8. The Parker House Inn and Restaurant 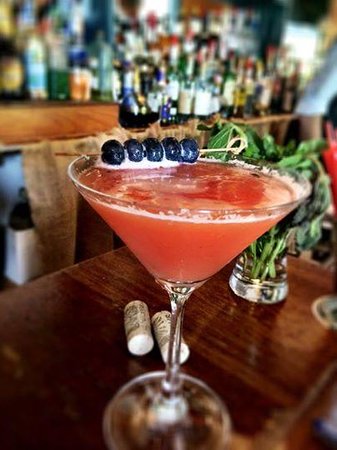 This is the 3rd year in a row that we celebrated my birthday in Quechee. We decided to try this restaurant since we were able to make a reservation for a table with a view... and we are very glad that we did!

It was a lovely sunny day with temps in the 60s. We were warmly welcomed and seated outside. However the breeze was very strong and cool and we quickly left the wonderful view for indoor dining.

We were seated in the charming front room with the blazing fire in the gas fireplace where we immediately felt comfortable.

After having the olives and the tasty bread we knew we were in for a great meal.
The cocktails were made with a very generous pour.
We enjoyed the seafood risotto as well as the seared scallops. The scrumptious chocolate mousse cake was topped with a lighted candle.

Our server was fantastic! He easily handled all 6 of the tables which were occupied.We enjoyed our leisurely dinner and never felt rushed.

We definitely plan to return to our new favorite restaurant in Quechee. 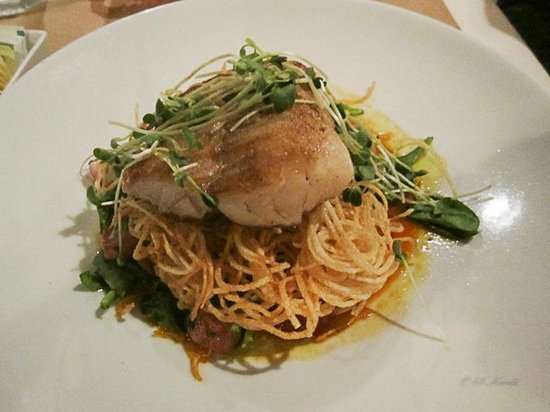 Overall this is a good restaurant. We especially like their specialty fries. Meat loaf is fantastic. Though their pasta (kids menu) is really bland and tasteless. Portebello mushroom is also sour and not good at all.
I would still recommend Thyme, but would not recommend all the dishes on the menu. 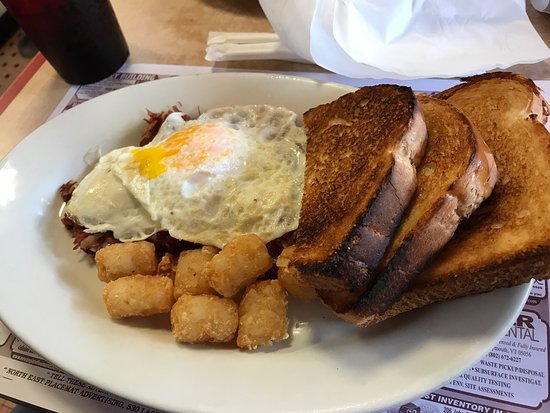 Elvis is Back !!!! Open 7 Days for Breakfast and Lunch from 6am to 3pm and 7am to 3pm on Sundays. Simply the Best !!! Come see what all the local hub-bub is about !

This is a fairly crowded, family style and inexpensive diner. I was on a road trip with my boyfriend and stopped in for breakfast. Lines were long, but was seated rather quickly. Everything went downhill form there.

We sat down for over 15 min and the waitress never took our orders while we watched other sat down after us got their meals and coffee was served. We flagged down another waitress that was there to notify our server, both acknowledged, but still took another 5 min to come and get our order. She took our order and finally, filled our coffee.

We waited an additional 20 min and still, no food. I tried to get the attention of our server again, she acknowledged, but still, didn't come by for another 5 min. Her demeanor was less then enthusiastic when we asked about our order and if she can please refill our coffee. By now, we have been sitting in the booth for over 45 min with minimal to no service.

However, I saw how lovely she was serving a couple and talking to them non-stop, pouring them refills and also taking care of the table right behind us to settle a bill. Never once did she came by to inquire if we were ok. Our food finally came after sitting in the corner booth for over 50 min.

We finally understood why we were treated that way as I sat there to observe, while flagging her down numerous times to help us and no help was given. We are people of color. We felt so mistreated by her and felt so disgusted to be in her presence. I will vow to NEVER return there again as that is how she made us felt.

I was and still am in utter disbelief and will make sure that this doesn't get unnoticed. Shame on her for making us feel that way. She may not admit it, but we know for sure that was how she made us feel. Apologies definitely not accepted from a racist!