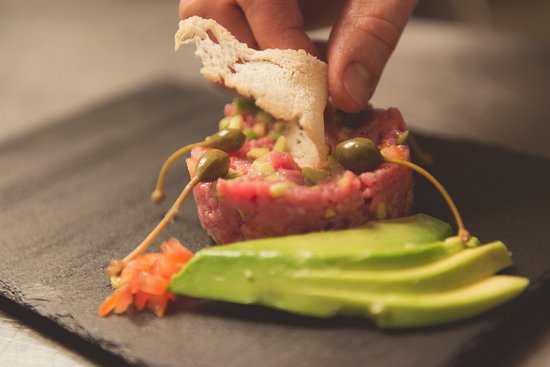 Reviewed By Lorenzo B

Rarely you have the luck to pick the first place nearby suggested by TripAdvisor and find a special place like Cuore & Sapore. You could say that it's a testament to Italian and Umbria's cuisine if you can almost walk into a place at random and have it top the charts of the best places I ever ate at. The average in Italy is so high that it takes an extra gear or two to better it, but this is exactly what this place does: starting with service that was very welcoming and attentive. When it comes to the food everything was homemade and cooked to perfection: from the different types of bread, to the typical pasta, to the desserts. If I was a Michelin guide rater, I'd say that this place is one that deserves a detour if you're in the area. 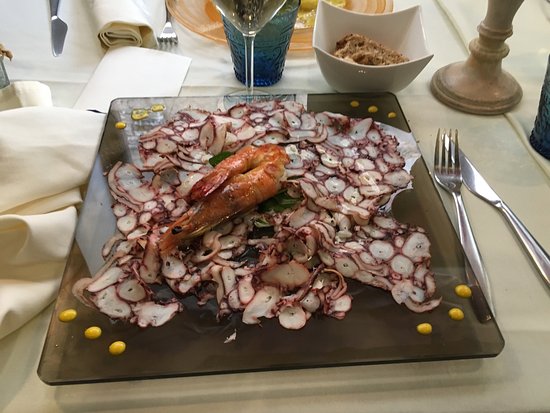 Probably one of the best dining experiences I've had in Spoleto. Excellent service, an extensive and varied menu, friendly and courteous staff. Each course was presently beautifully, was served hot and was delicious. The staff were very attentive without being intrusive. The only issue I had was that the contori was delivered to the table after we had finished the main course, apart from that, an excellent fine dining experience. Highly recommended. 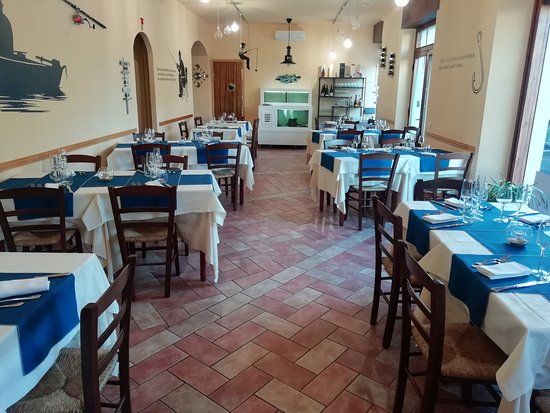 Thereâs so much to say about this incredible Restaurant completely specializing in Fish and Seafood. My family of 6 adults and one child happened upon it and were so happy we did. It is run by the Owner/Chef who drives to Naples to get the fish and seafood and cooks the most flavorsome incredible dishes Iâve experienced in a seafood Restaurant. We chose 2 plates of grilled Prawns in Balsamic and they were heaven! Also prawn and calamari fried in a very light tempura batter with fresh lemon. Linguini with lobster and a tomato base sauce and Gnoccetti with prawns in a stunning sauce, and fried Cod in a light batter that was so good, my brother in law ordered another portion. Although they didnât have a child menu they made a pasta with tomato base sauce and she loved it. The most incredible ending was the Rum Baba. My God ! Devine is not enough to describe it. It was heavenly We spoke to the young Owner/Chef and his passion for his craft is palpable. Together with his English speaking partner they have a winning combination and we encourage anyone into their seafood to go and enjoy the experience. Awesome Thank you Dereks. If you come again in Spoleto we waiting for you. 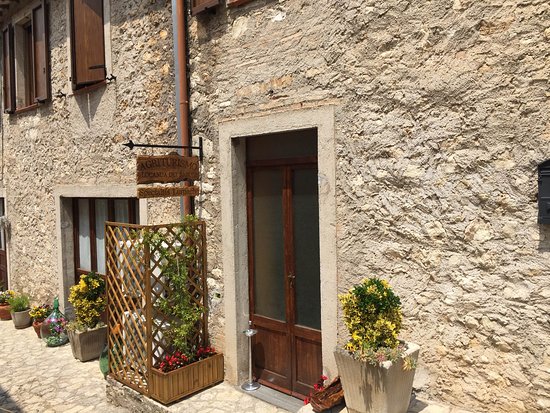 Simple and delicious "Agriturismo" in there you can taste typical paesant dishes cooked with semplicity, using animals bred and products grown in the family farm. Our speciality: Delicious snail dishes "Helix Aspersa Muller". Booking is recommended.

Second time I went here but brought my 16 year old with me this time. The mixed plate of meats was 7 euros and her chicken wings, which is NOT like amaerican chicken wings byut much bigger and better was 6 euros. Fresh green salad was 2.5 and desert too for that price. Today I went because I have ordered 30 prk sausgaes and 30 slices of pork, all uncooked to be frozen fresh in my freezer, so we decided to eat too. LOVELY FAMILY and very simple place to eat high quality authentic organic healthy food. My 16 year old wants to go back...

Merged in the enchanting landscape preluding to the Monti Sibillini National Park, in the heart of green Umbria, is the Hotel Locanda Cacio Re from an ancient 16th century refurbished farm. Inside, you'll find comfortable rooms, named after local legends

As part of a Collette tour, we participated in a cooking class and enjoyed the meal the chef prepared using the food items we made which included roughly cut pasta, ravioli, focaccia, tiramisu and semi-freddo. The staff was great to work with and we learned a lot about traditional Italian cooking in the Umbrian region. After the class (while the chef worked his magic), we enjoyed a tour of the adjacent village led by the chef's son. The area is beautiful and I would recommend this to people who enjoy preparing food. 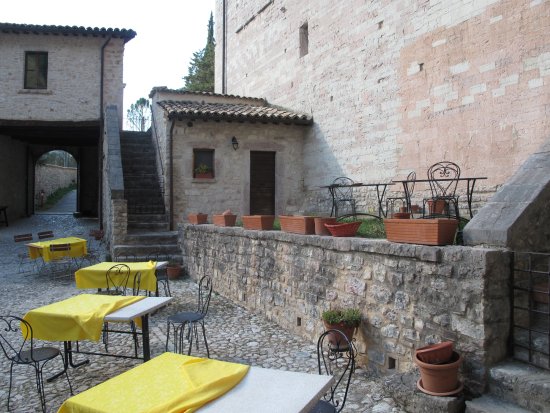 I had the pleasure of staying in this magnificent B&B in an ancient converted Abbey. I was further delighted to discover how wonderful the restaurant was. So good that I returned again and stayed an extra couple of days. My compliments go to Monica and Lara who manage the B&B and restaurant and also to Francesca who is an amazingly talented chef! I have now made a promise to myself that whenever I make my annual re-visit to Umbria, I will stay a few days at Abbazia del santi Felicio e Mauro!

Out of the touristic umbrian places, but good place for lunch. The river lobster not only looked good, but also tasted fresh. The trout with truffle was also super fresh, though I now know I prefer trout without truffle more, particularly in this restaurant. Good wines, nice service althogether. Will be back! 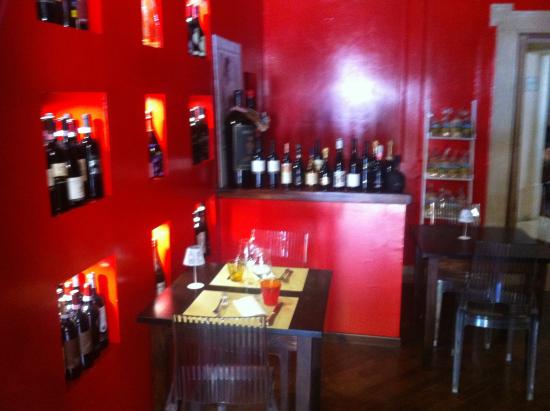 Reviewed By Greg A

This little places a gem.....we love everything on the menu particularly the meals with truffle such as the Farro Soup and the whole Trout with Tartufo - they will even de-bone it if you prefer. The service is terrific and we look forward to getting back there again as soon as possible.

Large area with lots of open air seating. Man made lake with trout to catch.We all had different pasta dishes & all enjoyed. One had a nice size salad with it & my hubby had a veggie. Most pastas in this area are served with mushrooms or wild boar & they are known for their truffles.Mine had sausage with a slight cream sauce. Four people had the carbonara pasta. I had a local beer called Peroni. I favor it over Moretti. This is a more casual restaurant & they do not serve pizza till evening. Don't know why.

Most Popular Italian food in Scheggino, Province of Perugia, Italy 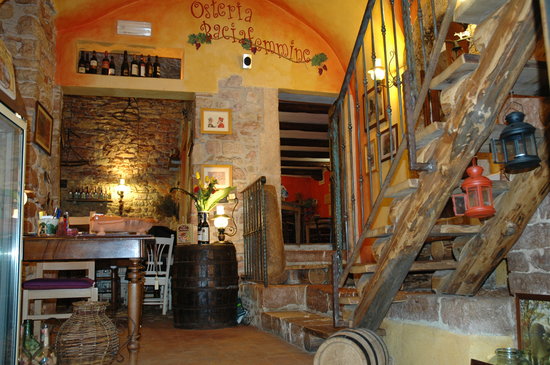 First off, Scheggino is charming. There are several promising looking restaurants in a well kept village with a nice piazza, a truffle museum, and the fast flowing river that runs through, offering a white water rafting experience for those so minded. I'm more minded towards food & drink personally, so, on the basis of the glowing TA reviews, it was off to Baciafemmine for an off-season Monday lunch. The approach to the restaurant is lovely - climbing up from the river, via several twisty turny flights of stairs, each with a small sign cajoling you on towards your destination. The restaurant is nicely done, two dining areas, the main one having a large open fireplace - not, unfortunately, lit for our visit ... I guess we were just too early in the year for that to be felt necessary on a Monday lunchtime. Shame, as I love a good fire, and the room was decidedly cool for those of us silly enough to have come in a teeshirt (it was 18Â° and sunny outside!). When we arrived, there was one other table, a group of 5 business colleagues, I think, who gave the place a nice convivial buzz, and another table of 3 arrived soon after us. Not busy, but a pleasant atmosphere and busier than I'd expected in such a rural location for a Monday lunch in mid-October.We had a chat with the gent doing front of house. He knew his stuff, and was relaxed and pleasant. We ordered from the very extensive range of good quality Umbrian red wines (ranging from 15â¬ upwards, and focused mainly on Montefalco, with the welcome presence of ciegliolo di Narni, one of my faves). The menu is fairly traditional, no fancy nouvelle touches here, just a focus on good, homemade produce. Lots of truffle, plenty of boar, and a good dose of the abundant local river trout (there is a 'siding' from the fast flowing river, which runs parallel through the village, and in which you can observe the trout as they pluck flies from the surface through the crystal clear water. Lovely).We chose the most expensive antipasti, based on the many reviews on TA, ordering one 14.5â¬ antipasto to share between the two of us. This was the star of the show. Calling it an antipasto doesn't really do it justice - frankly, I have had Michelin starred tasting menus which have delighted me (and filled me up!) less. It is presented as a series of separate plates, clearly made to order, carefully presented, and brought to the table individually. I think there were seven 'courses' in all, starting with fish, shellfish, then moving on to cheese (hot and cold), ragu on polenta, truffle, crostini, savoury pastry, and finishing up with a traditional salumi & formaggio plate. Quite stunning, and astonishing value for the quality/quantity. Seriously, I would have paid the 14.5â¬ just for the gamberoni wrapped in prosciutto de cinta alone, had there been three of them, rather than 'just' the two enormous specimens included.At the end of this feast, we were both at a point where we could just about have stopped eating - not quite full, but it was really substantial stuff.We'd ordered a primo each, with baked trout to share as a secondo. I had the home made fresh pasta with truffle (delicious, and a generous dose of the black truffle), my wife had made the mistake of ordering the wild boar ragu on polenta. I say mistake because it was (a) delicious and (b) enormous. Too moreish to leave, the two of us devoured it, despite ever-increasing protests from our bellies. A bottle of grechetto was ordered in order to aid us in eating the trout, and it came well chilled and with an ice pack wrapped around to keep it so as we ate. Top marks, and very well priced at 12â¬. The trout itself was served deboned, but otherwise still intact, and with a breadcrumb, herb and tomato stuffing/gratin. It was very nice, delicate flesh not overpowered by the crumb coating. We had ordered a mixed salad and cheese/anchovy oven baked potatoes as contorni. We devoured the lovely fresh salad, however the - very tasty - potatoes were a step too far, and we admitted defeat.This was really well executed food, prepared and presented by people who clearly care about what they offer, how they offer it, and how it tastes. The only things I would change about our meal would be having the fire lit (which I think they only do in the evenings?) and, with the benefit of hindsight, ordering only one primo to share next time, and ditching the potatoes.I will certainly return, and who knows, I may even get as far as dolce next time if I order a bit more judiciously!Our bill came to about 84â¬ in total, which they rounded down to 80â¬. This is an expensive lunch, but considering the two bottles of wine, and the fact that we were still full 24 hours later, it is one that I was happy to pay for.

Where to eat Central-Italian food in Scheggino: The Best Restaurants and Bars