Top Things to do in Oran

Oran (Arabic: وَهران‎, Wahrān; Berber language: ⵡⴻⵂⵔⴰⵏ Wehran), is a coastal city that is located in the north-west of Algeria. It is considered the second most important city of Algeria after the capital Algiers, due to its commercial, industrial, and cultural importance. It is 432 km (268 mi) from Algiers. The total population of the city was 759,645 in 2008, while the metropolitan area has a population of approximately 1,500,000 making it the second largest city in Algeria.
Things to do in Oran 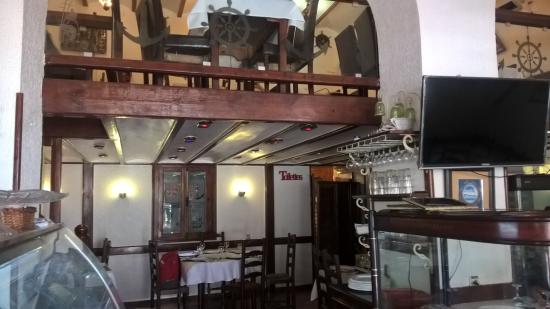 As a group we had lunch here before returning to Algiers and i could have stayed all day having a long lunch. It was a vibrant atmosphere however the waiters were disappointing at times and seemed overwhelmed by the busyness of the place. Dishes were excellent and portions very good. Would highly recommend the octopus with squid ink omg.
I truly hope to return one day.
Insha allah. 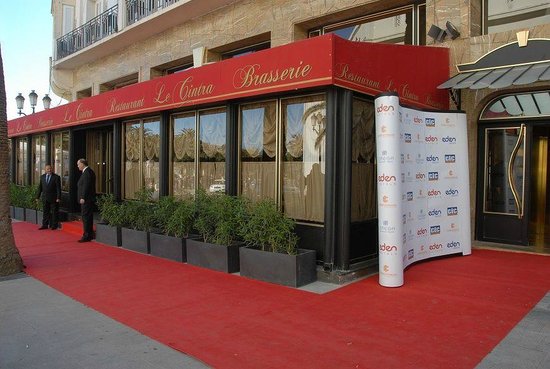 This restaurant features an elegant, traditional French decor and upon arrival we received a friendly greeting by the maitre d'hotel. Initially our waiter was attentive while taking our order. Somehow it went downhill from there. My Supreme de Vollaile (roasted chicken with a creamy mushroom sauce) arrived at the table clearly undercooked. It was pink but I really prefer poultry cooked throughl, so I politely sent it back to be roasted a bit more. The waiter looked miffed but carried the plate back to the kitchen. My husband was half finished with his lamb dish before a different waiter brought the chicken back. They had cooked it as plated with the sauce, which was now nearly dried up as a result. The chicken was tough and dry as well. I ate less than half. It took ages for the plates to be cleared and a good 30 minutes before we saw the waiter again and could signal him for the check. When he still didn't bring the bill my husband had to get up and retrieve it. Below average restaurant despite the classy interior. I would not recommend it. 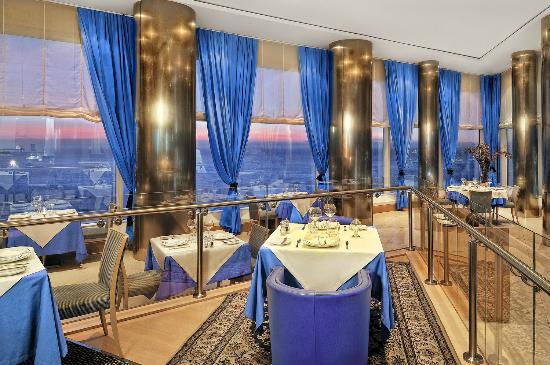 As an Executive for a 5 diamond international hotel group, I appreciate the effort that the staf at Le Ciel are giving to operate at the luxury level. They are almost there..but have a few details to improve on before they are there!
The restaurant is lovely...although there was fog the night we were there and we couldn't appreciate the view! The service was slow considering the restaurant was practically empty..30 minutes between courses. There were nice touches and then misses...like the waiter picked up that I was more comfortable with English so brought my spouse a french menu and an english one for me without being asked - but we had to ask for a children's menu when we were dining with a toddler.
The staff are not as well-versed in English as you might like and they won't ask questions. Case in point, I asked the waiter to tell me about the rib of beef dish on the menu and proceeded to order it. So imagine my surprise, when 30 minutes later, I had a dish that obviously was a filet of fish. When I flagged the waiter down and explained, I had ordered the beef, " He looked at the white fish and looked back at me and said " That IS beef". Needless to say - I let spouse do the rest of the ordering. It was going to take thirty minutes for me to have the beef, so I settled with the fish - which I have to admit was very well cooked.
They had a duo performing that were good but didn't really read the crowd well. They performed sexy, sultry, love songs, when the only diners were a couple of families, a table of businessmen, and a group that was entertaining themself and not at all listening.
All in all - the food was tasty, well cooked and worth waiting for. I give them A for effort! 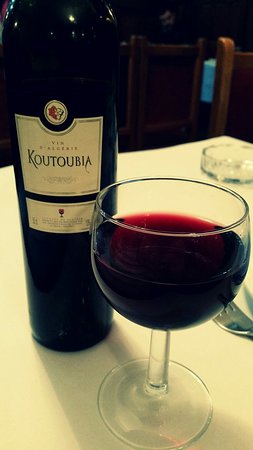 Came here for dinner tonight and tried the paella. I'd say it was decent enough without being spectacular. Service was good, only real downside was that alcohol isn't permitted in restaurants in Oran on Fridays apparently. 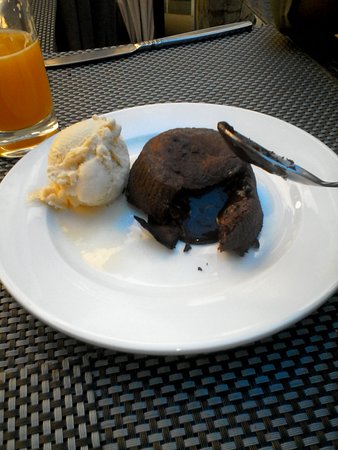 Everything is good about this restaurant: location (around Sheraton area), the staff (welcoming you from the doorstep), the decoration (cozy, comfortable) and the food!
So if you want to have a good time and very fresh and delicious seafood: that's the place to be!
Try out the octopus salad and the paella! 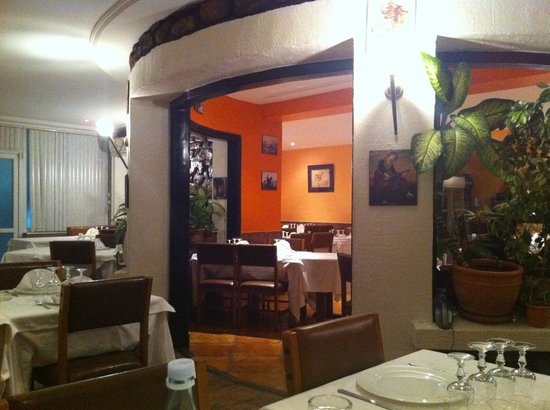 Reviewed By Karim A - Blida, Algeria

Moreover the invoice witch is judged very costly and highly expensive, the service is very ugly, slow and it is not enough clean in term of own HYGIENE. But at least the view is nice. 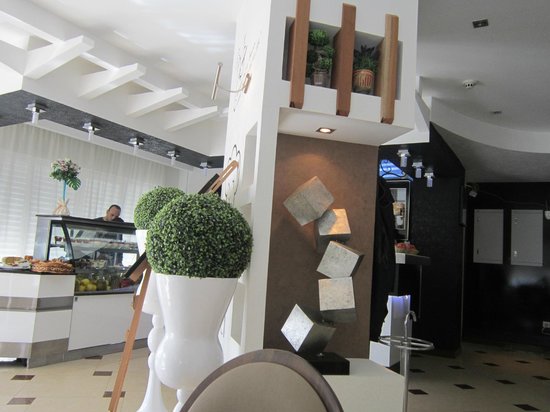 A good food served in a nice location.
The quality is ok and the menu have a good selection of food both tradional and intercontinental.
The service is also related to the valid level of that restaurant.
I suggest. 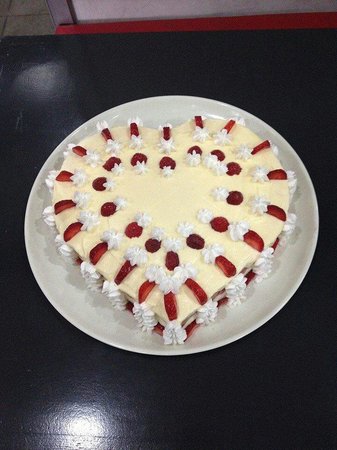 Great place for gelato ! A clean one, there are many choices and the presentation is exquisite! what an amazing flavors ..."Noisette" one of the best i tasted there ...all what i can say take a break and visit that amazing place,enjoy the moment ! 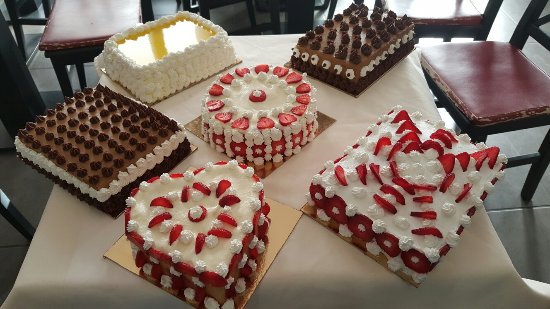 Located in Ain Turk placette, in front of Hotel Shams, the a very vivid area especially on summer nights; a very nice restaurant , good food, nice personnel and not expensive at all. 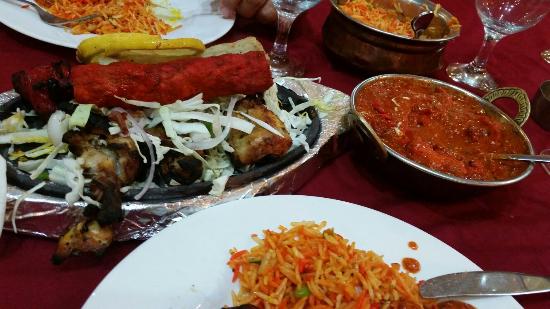 Loved the place and atmosphere. The menu is varied, detailed and rich, especially for those with limited knowledge on Indian dishes. Loved the service too.
We ordered 2 plain rice, 3 Naans (plain, garlic, potato and ground beef naans), chicken Tikka, chicken tandoori, chicken Masala, and a lamb dish.
Plain Naan costs 150dz (about $1) and the price gets higher with more added flavors or fillings.
Downsides: Rice is overpriced; for 700da (almost 5$) for plain rice. I have been to authentic Indian restaurants in different countries and rice comes with the dish, not as a complementary, extra charged, separate meal.
But overall, I loved the experience, the flavors were so authentic, the atmosphere and the service. Should give it a try if you ever visit Oran!! (y)