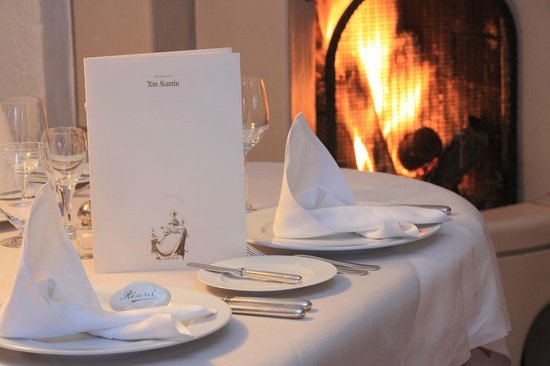 What can you say about this exquisite restaurant! The atmosphere is superb, the service from making a booking to saying goodbye was very friendly, warm-hearted and welcoming. The menu is small but outstanding and offers such a variety that every taste should be satisfied. We had the three course surprise menu and were delighted. The is purely the jewel of Neumünster. While some might consider Am Kamin a bit on the expensive side it is truly value for money and worth every Euro spent. We will definitely come again.
. 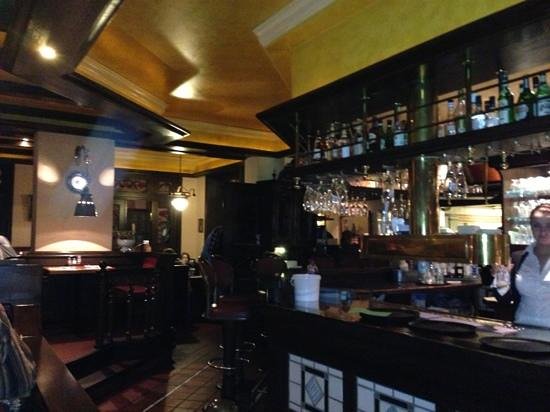 Great beef, flame broiled, cooked to order. They serve pork and Turkey as well, but who cares? Hamburgers/cheeseburgers are delicious, but a bit thin. Prices are a bit inflated. Not expensive, per se, but higher than they should be. 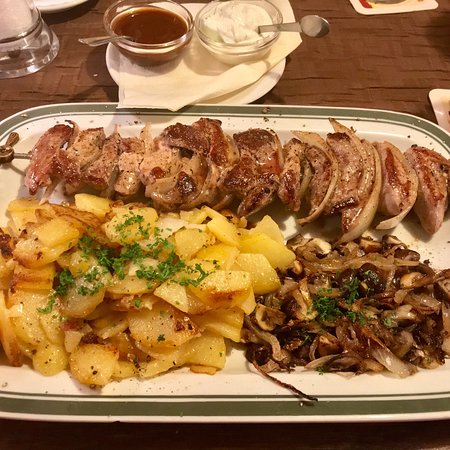 Within walking distance off city center, you find this cozy place. Portions are big, and unless you are very hungry you dont need starters. You get typical german bread and spreadable fat foro free. Meals are typcal germans with vegetarian options.
The schnitzels are highly recommended.
For deserrt we got a free snaps.
Service is very friendly and dining room very nice. 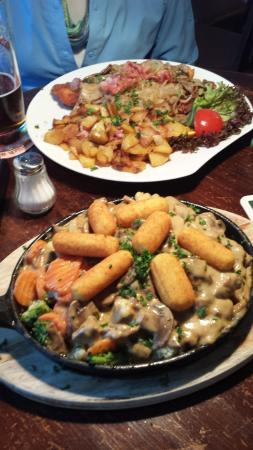 Not only a nice place to stop and have a beer or two (or three, or ...) but some of the finest traditional German food you will find. The frikadellen are wonderful! Highly recommended! Good Food, very friendly owners. We liked the beerglasses they were using, and they gave us a couple as presents!! 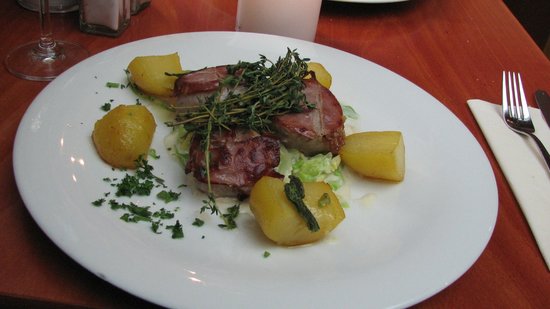 Blechnapf is a very good restaurant especially for dinner. The food is excellent and we would say close to 5 stars! We could not really fault the food nor the service. We have been there twice so far and will be going again tonight. The food preparation and presentation is, again, excellent with a very "clean" taste, not fatty, not too much or too little. We really cannot say much more. Well worth a visit for dinner. Lunch is good also but perhaps not quite as good or perhaps we were expecting the same quality as for dinner and it was not quite there. 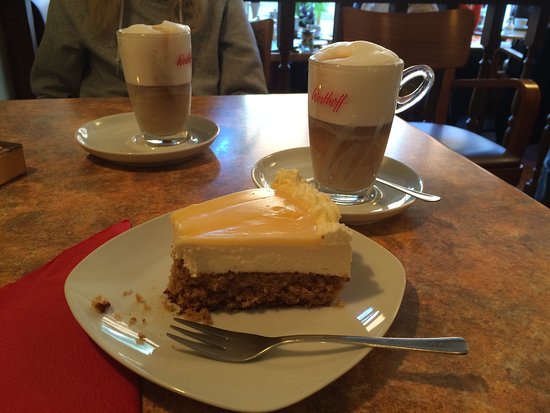 We went in to buy chocolate candy which was very good but then saw the bakery and cafe. We stopped in twice for cake and coffee. There was a different selection each day. The raspberry tart with whipped cream was delicious and not overly sweet or heavy. The Sacher torte was so chocolately and rich. I would be at Cafe Oldehus every day if I lived in Neumunster 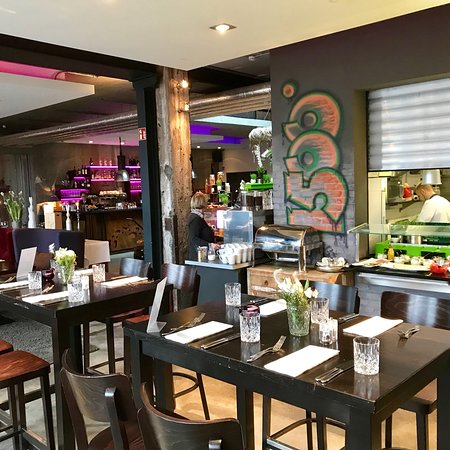 We visit the restaurant on a very hot day in connection with a stay in the hotel. All seats outside in the Terrace was taken, so we were, as the only two guests, seated in the rather large restaurant. The waitress was kind enough to open the doors to the street even more in hope for just a small breeze to cool us all down. While we waited for the menu and later for our food, we had time to study the coloristic paintings on the walls, and the few remaining concrete and steel structures of the old steel mill.
We also had time to observe a phenomenon we have observed in other restaurants as well, when there is too little to do for the staff, they tend to spend more time talking to each other than serving the few guest they have. Eventually as more guests arrived, the staff become more attentive.
We ordered two wiener schnitzels, which came with a well-composed and well tasting potato-cucumber salad. The meat was cooked to perfection with a nice crunchy crust.
All in all a good experience. And we might come back next time we pass Neumünster at diner time. 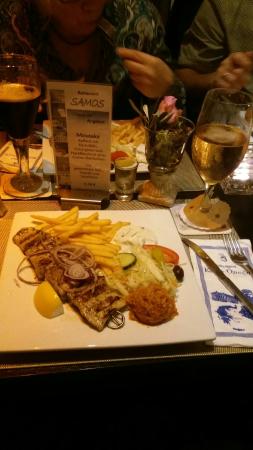 My wife had been hearing good things about this restaurant, so we decided to drop in one evening as we were on our way home from town. We took a table in the pavilion out front, since the weather was so nice (Also because a game from the 2014 World Cup was being broadcast on 2 outdoor screens, and I wanted to see the game!). We were warmly greeted immediately, and guided to a table as if we were expected VIP's. We were then treated to an aperitif of Ouzo - properly chilled ; )
The menu features traditional Greek food, with which we are both familiar, but offers a wide range of combination meals which made our decision more difficult (a GOOD thing!)
I decided for the Gyros in Metaxa Sauce, a dish I've had at many other establishments, and had always been "hit or miss". My wife had a combo platter with lamb chops, sufflaki, suzuki.
My dish was, without a doubt, the best I have ever had. In fact, I told my wife that, when we come back, I will have a hard time trying anything else! It wasn't swimming in a pool of sauce, but had just the right amount, covered with a layer of hot, melted cheese. It was so delicious, I'd order it again and again!
My wife let me try samplings from her plate. I expected the suflaki to be dry, as it often is, but it was moist, perfectly seasoned, and perfectly grilled. As were the lamb and Suzuki. The fries, often a good indicator of the care and quality of the chef (if you can't fry potatoes, what can you do?) were perfect. Crisp outside, moist inside, and HOT! (a rarity!)
After our meal, we embarrassed ourselves when we found that Samos does not accept Credit or EC cards - cash only - and we were short on cash. As my wife and I began debating who would run to a teller machine and who would remain, our waiter (I assume he was the owner) patted me on the shoulder and said, "You know, I have been here for 25 years. We will be here tomorrow. Don't worry about it!" Whereupon he promptly produced three more glasses of Ouzo, as he asked where we were from. We told him that, although we now live in Neumunster, we came from America. He proposed a toast: "To Jürgen Klinsmann, may he get the job done!" (Jürgen Klinsmann is the German coach of the US Men's National Soccer Team).
After our treat of Ouzo, we shook hands, gave a decent tip (collected and kept by the owner's 5 year old son!) and set out to find the nearest teller machine! (We wen back and paid right away.)
We will frequent this restaurant from now on, and treat our guests and family to dinners here whenever they come to visit.
One of my best dining out experiences ever! Shoppers at the Neumunster Designer Outlet near Hamburg need a lot of energy. A break works wonders too, and Marché Mövenpick is on hand to serve pure freshness to shopaholics. All creations are conjured up by hand at the open market kitchen, and include long pizzas (instead of round ones), exciting salads and refreshing shakes and juices. Everything is served up in a relaxing ambiance, surrounded by modern decor. Refuel before heading back to the shops.

Their pizzas and salats are extremely good. Try to avoid to visit on satursdays for lunch all seat where taken! Tip try to get a seat before you order.