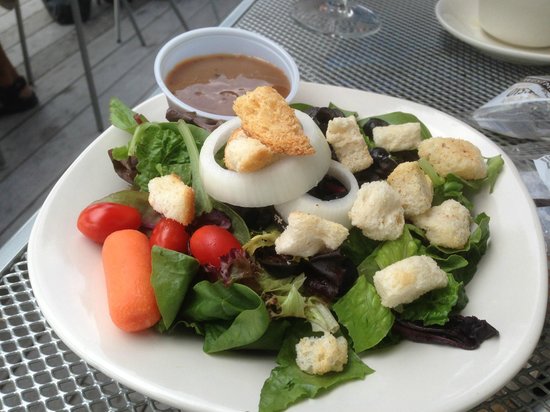 We had advanced reservations for lunch for a group of 30.As we only had 1 waitress, service was beyond awful.It took 35 minutes for her to serve water and a few iced teas.So weâre there almost 40 minutes before our orders were taken.Then we waited another hour for our orders to start arriving. And that was a lengthy inefficient process too. Lobster roll arrived, cole slaw several minutes later. Couldnât the kitchen put the dish of slaw on the plate?Food was okay and not inexpensive. We were there 3 hours. 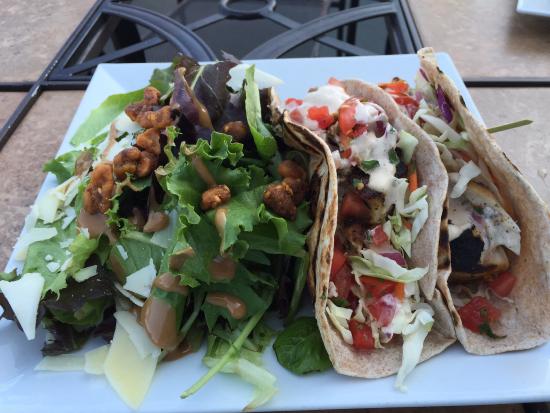 It's located in a marina and has views of the water and boats with an outside patio. It can be hard to find with all the large boats in the yard.

Stopped here for dinner with co-workers on a Thursday night. They were busy but had a table outside available. This restaurant is located in a tucked away lot behind an old warehouse right on the water. Nice views when you're seated outside. The menu has a decent amount of selections. I ordered the lobster pasta. I thought it was cooked well and had good favor. I'm not sure why they have it with a tomato sauce. It would have been significantly better in an alfredo sauce. My colleagues liked their chosen meals as well.I would come here again and recommend this location for anyone looking for a good meal. 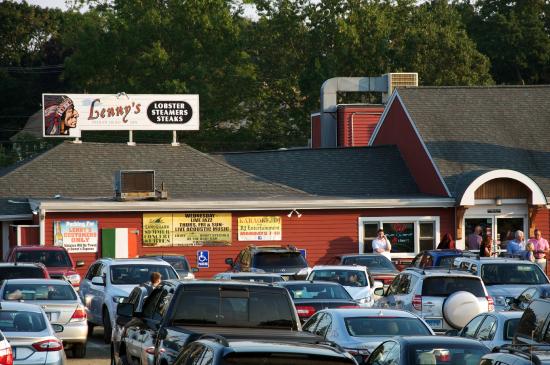 Lenny's sources the best seafood New England has to offer - from house made chowders to fresh lobsters to succulent steamers to clams and oysters on the half-shell. The fried seafood is gently breaded and cooked to order. For the land lubbers, their mouth

The restaurant has a clean, casual, and familiar atmosphere. Staff were warm and attentive. Food was good, but not great. We were perplexed by the pricing. Some beer selections cost less than soda, and other alcoholic beverages were quite low. But the fish was surprisingly high. We didnât order any alcohol, which would have balanced the bill better. As it was, we paid the most we have ever paid for fish and chips, but sadly, they did not win our devotion. As a result, we left a little grumpy and not interested in a return visit to this local favorite. 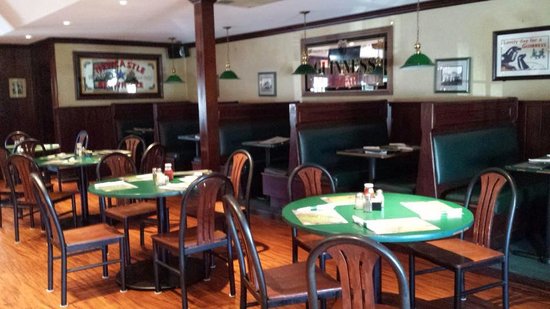 A group of twenty of us lunched hereaster our gym class. We all were hungry but the portions were so ample many of the group had to take homehalf of their food. The menu is truly varied offerings of meats.seafood,salads, wraps. sandwiches.pasta. and anything one could wanr. I had a super thick corned beef reuben sandwich, real old fashioned tender meat, and delicious crisp fries, One of the favorites for some was the pesto hamburger, but whatever the choice everyone enjoyed their food. The sevice was excellent. 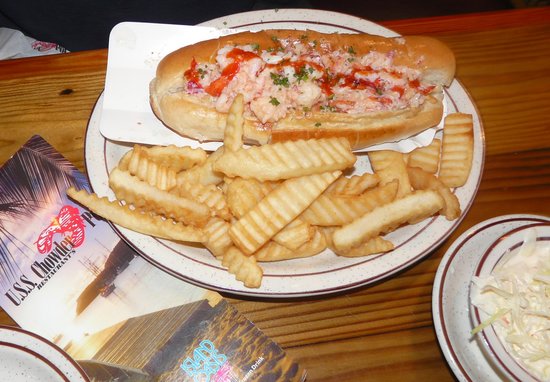 The atmosphere was fine, it was reasonably quiet, but the service was barely adequate. and best described as reactive as opposed to proactive. Water, finger wipes coffee, etc. refills all had to be requested. So if you don't see what you need ask, they probably have it but didn't offer it or tell you about it. My wife had sea scallops and I had the picked lobster dish. Her meal was fine but not anything other than average. Mine, not so much. The lobster was very "tough" with barely any flavor as was the shrimp in the topping. This was a $30.00 offering but the quality was totally lacking and certainly didn't justify the price. As there are so many good restaurants in the area with great food at fair prices and better quality we probably won't be back.Thank you for bringing this to our attention. We are addressing the issue that you had with your service. Our lazyman lobster is a very popular dish. We apologize for any inconvenience and hope your next visit is more enjoyable.

Top 10 Things to do in North Branford, United States

Restaurant specializing in comfort food with a twist and service that'll make you feel right at home! At the Home, you will find two dining atmospheres. First, you will find our âdining roomâ, a room surrounded by windows, skylights and pictures of our to

We met six of our friends here last Sunday afternoon for a late lunch. We had made reservations, but for that particular time, they were not needed as the restaurant was fairly empty.We were seated in the back room and, for the next hour or two, were treated like VIP guests. Since there was no one else in the room with us, we had the undivided attention of our server..........our experience here was THE best!!!Both the drink & food menus were great... many options and all very fairly-priced, we thought. After drinks, our group shared two appetizers.........Artichoke Whipped Ricotta Dip and General Tso's Brussel Sprouts. Both were delicious! I have to be honest, though......we never would have even considered the Brussel Sprouts as an appetizer, but our server recommended them to us. So glad that she did because we would have missed out on the incredible flavor of the roasted Brussel Sprouts!As for our entrees, we ordered so many different ones and all were great....not a bad one in the bunch, as they say. Included in our selections were the Hickory Smoked Maple Dusted Filet Tips Salad, Grilled Salmon Salad, Patty Melt, their "Home" Burger, Smoked Salami "Home"-Style Mac & Cheese, and Grilled Cheese Sandwich on Sourdough Bread (from the children's menu).Three of us ordered their "Home" Burger...with temperature requests ranging from medium rare to medium to well-done...and all were prepared perfectly.Portion sizes for all entrees were quiet ample......very few of us were able to leave a clean plate.This is a restaurant that we would highly recommend! Even though we didn't need reservations for our Sunday lunch, you might want to call the restaurant just to be sure that you don't need one for your dining adventure here. My daughter and her family live a short drive from this place. I never visit her without eating here at least a couple of times during my visit. Best whole belly fried clams, scallops, and lobster roll anywhere. Large portions. No charge to substitute delicious onion rings for French fries. Coleslaw is amazing. I would highly recommend a visit to this restaurant if you are in the area. It is not a large place so be prepared if you come during the busy dinner hour. Well worth the wait.