Most Popular Restaurants in Yreka

Yreka (/waɪˈriːkə/ wy-REE-kə) is the county seat of Siskiyou County, California, United States, located near the Shasta River at 2,500 feet (760 m) above sea level and covering about 10.1 sq mi (26 km2) area, of which most is land. As of the 2010 United States Census, the population was 7,765, reflecting an increase of 475 from the 7,290 counted in the 2000 Census. Yreka is home to the College of the Siskiyous, Klamath National Forest Interpretive Museum and the Siskiyou County Museum. Its gold mining heritage is commemorated by the high school team which uses a gold miner as their name and mascot. The city is also one of the possible capitals of the proposed State of Jefferson, alongside Redding, California and Port Orford, Oregon.
Things to do in Yreka 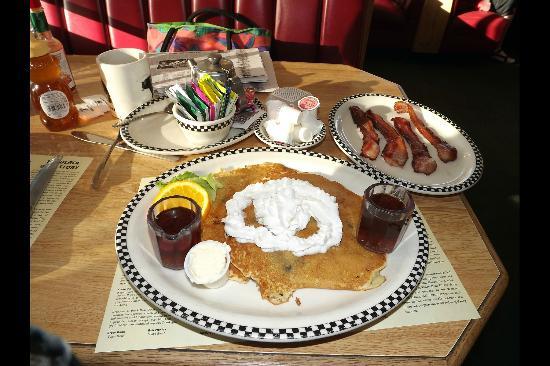 One thing that you quickly learn about the Black Bear Diner in Yreka is that we take our food and service very seriously. We use the very best ingredients, cook them to perfection, and have them sent to your table by the friendliest group of men and women that you can imagine. Come see for yourself what we’re all about, and we promise that you won’t leave disappointed.

We ate dinner at the Black Bear Diner in Yreka yesterday. The Black Bear Diner is part of a chain in this area is based of a philosophy of hearty, abundant good food. The decor focused, as one would expect, on bears. There were two sides to the restaurant, one with booths and a playing jukebox, and the other quieter side, with tables. The service was very friendly and helpful with regards to a gluten free meal. Great selection on the cutesy menu that is printed like a 1937 newspaper for the town. The menu offered separate selections for breakfast, lunch and dinner. The cheeseburger and crispy fries were good. The salmon had to be sent back for a bit more cooking, but otherwise was satisfying. Black Bear Diner serves up food that as close to home cooking as you can find in a restaurant.

I am a serious coffee junkie serious quad shot a day.... gasp.... Save yourself some time and $$$ and stop by rather then going to the neighbors. First of all the espresso beans they use are outstanding. Some of the flavors are so unique... Lavandar Latte. My favorite is the pumpkin cheesecake. 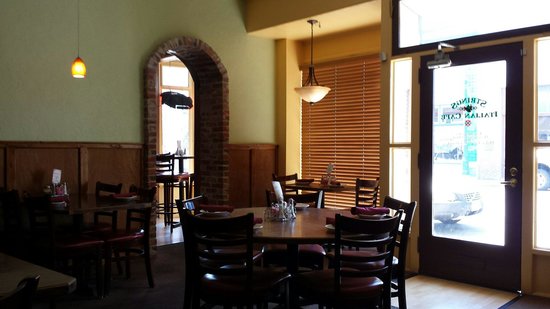 Homey, comfortable and tasty. The lunch veal special with marinara sauce served with with Alfredo sauce over pasta was good combo. The eggplant special was also yummy both orders came with a very large. Local wine and beer was served by a very professional waitress. We'll be back to try more items they offer.

From placing our order, to asking for a glass of water, the staff were the most genuine of any Starbucks I have ever been to. What great young people!!!! 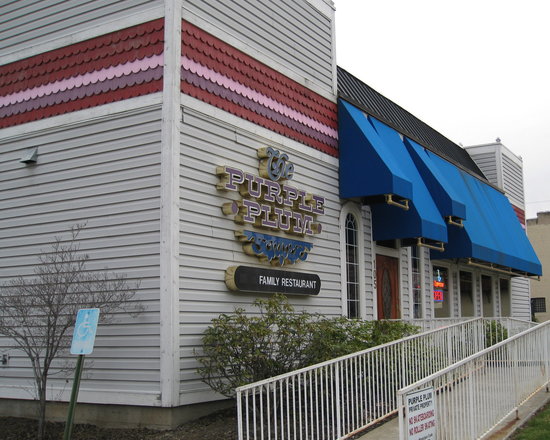 Reviewed By silverius1 - So. Cal.

The place was ok, it wasn't great and it wasn't bad. For what you got it was overpriced, but it wasn't terribly expensive. I probably would not eat here again but I wouldn't tell somebody else not to come here either. 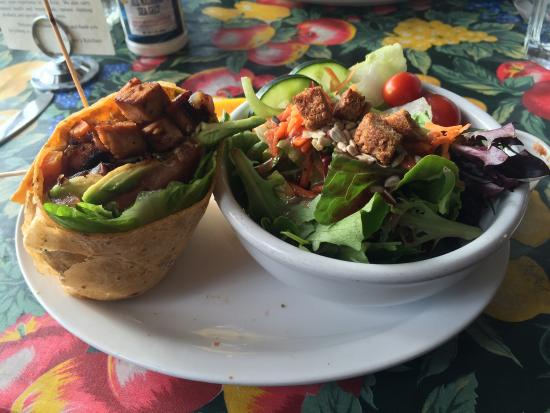 This establishment serves natural, organic, and wholesome food. My children split a peanut butter and honey sandwich on homemade bread, my husband and I split a chicken and cranberry sandwich on homemade bread. The soup was tasty. We ended our meal with two homemade cookies. The other side of the restaurant is a natural store. There are supplements, teas, and eclectic gift items. The owner said that they had been there for 20 years. It was a welcome stop of wholesome food on our road Trip. 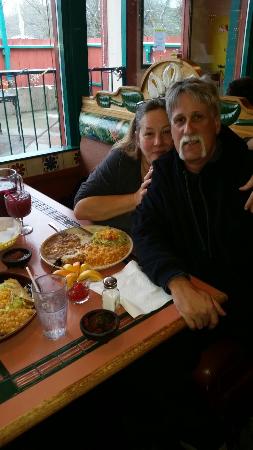 There we were in Yreka: SoCal refugees, a day's drive since my last Mexican food, and already I was jonesin' real bad for a Mexican meal. Would we be able to carry on? Could we find this elusive ambrosia that keeps most SoCal residents' forever pinned to La-La Land? While explaining California's labor realities, a State assemblyman once explained to me that "All food in California is Mexican food," which is true in a way, but REALLY good Mexican food is not always easy to find north of Salinas. Long story short: we took a chance on Casa Ramos at the northern frontier town that is Yreka and...OMG! EXCELLENT food! Two of us--hardcore, lifelong critics of Mexican fare--had the chili rellenos and were blissful. Another tried something with beef and was equally impressed. But...it gets even better. One of us had a dog (leashed, of course) and they let us all sit outside on the patio. We chatted with the wonderful waiter in our best Spanglish and watched the stars come out, all of us repaired beyond words. 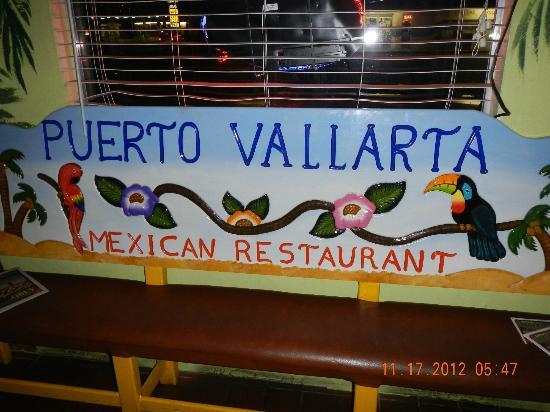 I-5 freeway at exit 776 in Yreka California

Traveling through on our way home from coastal trip. We needed a bite to eat and place to let the dog out. This place had good reviews and was right off highway so that made it appealing. I stayed out and walked the dog while my honey went in. He said he was greeted by a friendly staff. Said the owners son came and talked with him and discovered they shared passion for Z cars. We love when we can meet new people and get a little more than your basic "hi what can I get you". Unfortunately we did t get to eat in but we found place to park in the shade to enjoy our meal. Food was excellent and fresh tasting. I had the carnitas plate and he had the grande burrito. No complaints. Good guacamole also. Enjoyed our lunch very much. Will stop in again for sure when we come this way. Thank you! 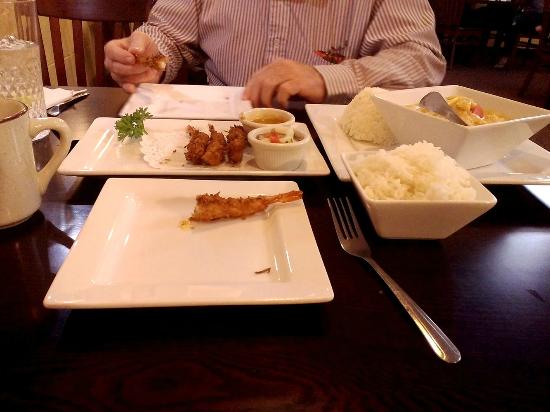 I am not a fan of Natalie Thai restaurant. I have eaten there on several occasions and have always been disappointed with the food. In my opinion they do not serve authentic Thai food. The restaurant has a very weird vibe and the service can be unfriendly at times depending upon how much money your spending. 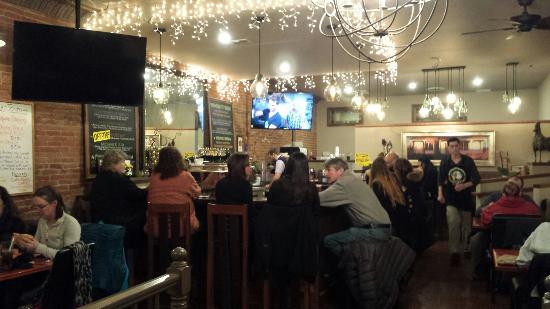 We continued our ongoing brewpub tour here. First impression was off putting. An employee, possibly the bartender, was miffed because we chose a table for four by the front do, but grudgingly said that it was probably okay since it was mid-afternoon. Well, spouse & I were the only table-service customers there for our entire visit. Everyone else was the belly-up-to-the- bar-boys crowd. Server, though, was super friendly. I had a burger that was huge & quite tasty. Spouse enjoyed a wrap. Our beer flight offered a fine selection that included his IPA & an Imperial stout. Our sides were potato salads; fries aren't served, which is okay with us. We also loved the setting in historic downtown.