Top Things to do in Waco

Most Popular Restaurants in Waco

Waco (/ˈweɪkoʊ/ WAY-koh) is a city which is the county seat of McLennan County, Texas, United States. It is situated along the Brazos River and I-35, halfway between Dallas and Austin. The city had a 2010 population of 124,805, making it the 22nd-most populous city in the state. The US Census 2016 population estimate is 134,432 The Waco Metropolitan Statistical Area consists of McLennan and Falls Counties, which had a 2010 population of 234,906. Falls County was added to the Waco MSA in 2013. The US Census 2017 population estimate for the Waco MSA is 268,696.
Things to do in Waco 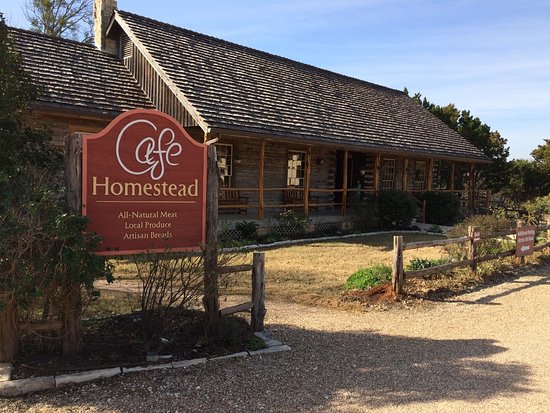 Cafe Homestead serves deliciously healthful food in the unique setting of a traditional craft village in our sustainable, organic farming community. We offer grass-fed beef; fresh buns, bread and rolls baked daily from whole-grain flour by Artisan Oven; cheeses produced by our community’s internationally award-winning Brazos Valley Cheese company; and other fine foods, including our all-natural, delectable ice cream. Our fruit and vegetables are always fresh, and we strive to provide locally grown produce. Begun in 1994 as a small deli, Cafe Homestead has grown to become a restaurant serving over 45,000 guests a year and is widely known for its menu of traditional Texan, Mediterranean and specialty cuisines. Before or after enjoying a relaxing meal served by friendly people from our farm community, visit our craft shops, Gift Barn and Model Homestead and take a Hayride to our scenic overlook.

I went here based on a recommendation. It was out of the way , but worth the trip. They grow their own food and you can taste the difference. If you ant dinner, go early. They close at 6. 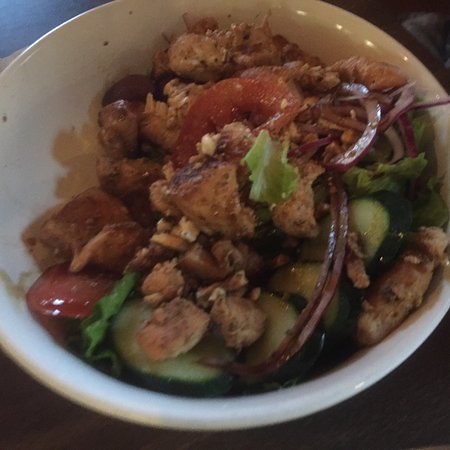 Excellent lunch. Shrimp gyro was large and perfectly done shrimp. Caesar Salad also large with top notch ingredients. Good wine and modest beer selection. Retsina a little pricey. On both the salad and gyro the dressing was almost too much. For a lighter touch you my try ordering dressing on the side and mixing to taste. Very interesting menu to work thru. 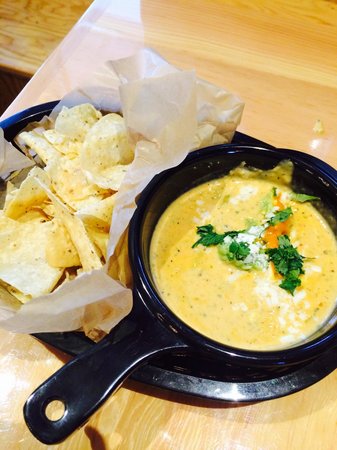 We love stopping at Torchy’s anytime we’re in Waco. The queso can’t be beat and the trailer park taco is a fave. The guacamole is a must have! I had the green Chile pork this visit and it was great as well!! We will definitely be back. 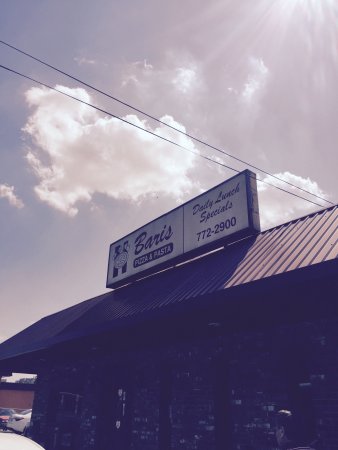 Visited for lunch and actually had a place to park! Apparently it is pretty tough to find a parking place at peak times. Food was great and very affordable. Lunch special is only $5.50 (calzone) Quick service and attentive wait staff. Everyone had leftovers to enjoy that evening! 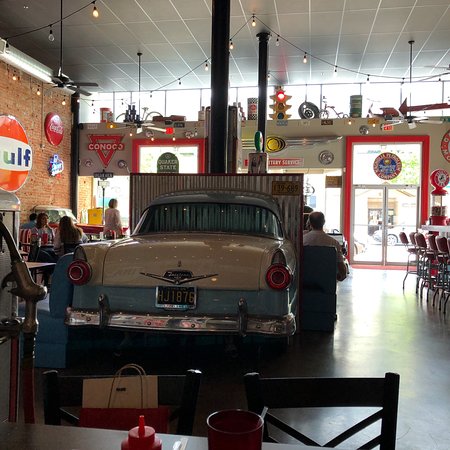 We visited Jake's after reading some Tripadvisor reviews. The restaurant has a fun vibe, with different old memorabilia displayed. Our server was very friendly and welcoming and the food arrived pretty quickly. Our dinner good. My husband had the pork chops and I had the roast. We both enjoyed all of the vegetable sides that are provided "family style". That being said, I thought it was good...not great. 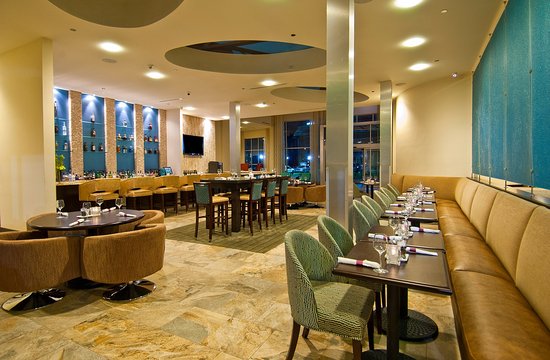 Reviewed By Girlhistorian - Fort Worth, Texas

We went for brunch, figuring that it would be pretty good since it was at the Hotel Indigo. We were wrong. First, the restaurant is in the middle of the lobby, with a chilly breeze every time the door opened. We were told to sit anywhere, but all of the tables had reserved signs, maybe left from the previous night. The table we chose was sticky. They were out of black tea. My friend’s entree was incorrectly prepared—overcooked eggs and undercooked eggs. Mine was good but skimpy. Overall, quite a disappointment. Saw George’s in the Top 10 restaurants in Waco on TripAdvisor then the front desk attendant at our hotel also recommended it so we gave it a try. We’re glad we did! The food and service were both excellent. I had the chicken fried steak sandwich and my wife had the half portion of the chicken fried steak platter. Both were plentiful and tasty. 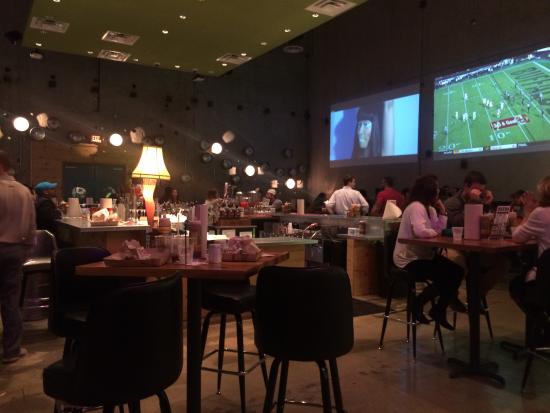 Reviewed By Margaret B - Dublin, Ohio

We stopped in Waco Texas on our way from Dallas to Austin one Sunday morning. My cousin was sad because Magnolia’s at the Silos was not open on Sunday. But then it appears nothing is open on Sunday in Waco, TX except Twisted Root Burger Company! They were a lot of cars parked outside but there’s a lot of seating inside. There’s a big bar in the middle with barstools made out of what looks to be either beer kegs or maybe root beer kegs. There are big screens showing sports and music videos. You go to the front first to place your order. After you finish ordering you are assigned a character name, could be a celebrity, singer, famous person or like us: we were “Spider Man.” While we were waiting in line I heard them call out that the “Barbra Streisand” order was ready. Once I figured out the schtick, I thought thank gawd we weren’t Barbra Streisand for pity sake! Still it’s a fun and cute idea. My husband had the exotic meat of the day, a camel bacon cheeseburger. I chose a bacon cheeseburger but I upgraded to Texas waygu meat. Both burgers came with fries and we had onion rings on the side. Of course we had to have a Twisted Root root beer! It was fun, the food was wonderful, and after those two bacon cheeseburgers it’s a wonder we didn’t need the ambulance at the 24-hour medical facility next door! 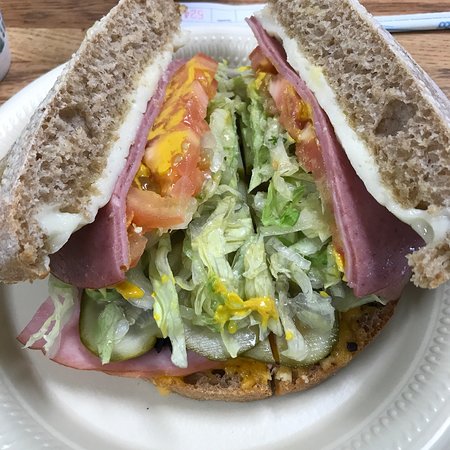 This was my first time to eat at Schmaltz's and I am sorry to have waited so long. Schmaltz's Sandwich Shoppe is a mid-size cafe in downtown Waco, with about 12 4-person tables and 2 larger tables. It is bright, with street wall windows and light-colored walls w/posters, and a black &white checkered linoleum floor. Friendly staff and reasonably fast service. It is very popular and was filling up by noon. I had a delicious Turkey sandwich - toasted house-made bread, hot when delivered to the table, and great potato salad. Very reasonable prices. Recommended. 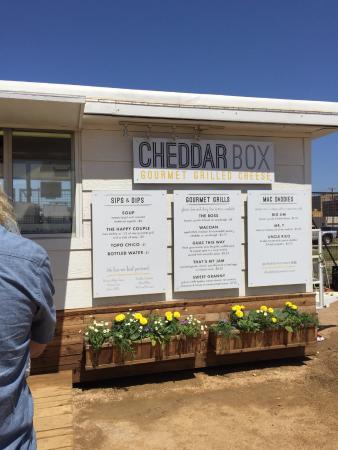