Most Popular Restaurants in San Elizario

San Elizario is a city in El Paso County, Texas, United States. The population was 13,603 at the 2010 census. It is part of the El Paso Metropolitan Statistical Area. It lies on the Rio Grande, which forms the border between the United States and Mexico. The city of Socorro adjoins it on the west and the town of Clint lies to the north.
Things to do in San Elizario 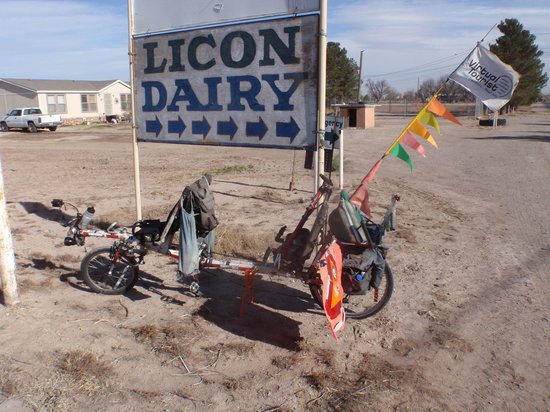 One of my all-time favorite biketours takes me into the Lower Valley of El PasoTX, through Ysleta, Socorro, Clint, San Elizario, Fabens, Tornillo, and Ft. Hancock, along the Mission Trail/Socorro Road/FR258 or TX20/Alameda or North Loop. I often divert from the Mission Trail onto Glorietta Road, for good reason: not only is it the back road into the San Elizario Historic District, but the entrance to Licon Dairy is also on this narrow, winding route. What a perfect place to take a breather from pedaling! Their homemade cheese is of the finest quality anywhere and since it is the source, it's not too expensive. I'll buy a package of tortillas (made on the premises also) as well as that delicious Azadero cheese, roll it burrito style, pop it into their microwave for 20 seconds and, voila!, a tasty meal, easy to carry, although I need to lick up a syrupy drip of cheese. The bathrooms and outside picnic tables make for a delightful respite. If you have youngun's, there are 4-legged animals well worth petting, and lots of parking for (motorized- and non-) vehicles. Open seven days a week, early to evening, this is a fantastic, and needed, site! 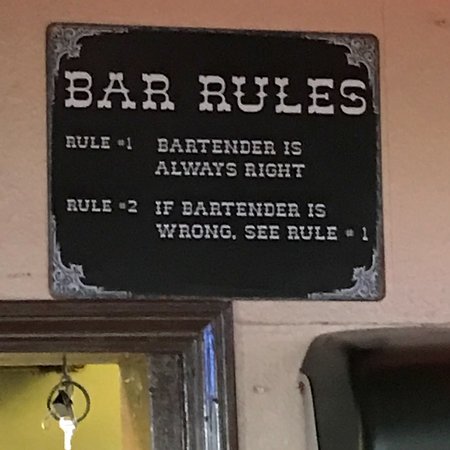 If you are looking for authentic Mexican food, this is the place! This restaurant and bar is a great place for all the local peeps, Clint, Fabens, Tornillo, Socorro, Horizon, and San Elizorio, El Pasoans, and anyone traveling through the area. Come let your troubles be forgotten. Great place to hang out with friends and family! Come discover El Paso&apos;s Lower Valley great hospitality.

Reviewed By Penny A - Kingston, Canada

You know that a Mexican restaurant is very good when it is filled with Hispanic people who bring their families. This restaurant is conveniently located next to the Best Western where we stayed for the night. I ordered a steak dinner for $15 which was perfectly cooked to the medium rare I requested with flavourful seasonings. This appears to be a family run restaurant with great service. I also enjoyed my "oversize" margarita which was only $5. Highly recommended for dinner!!

Delicious! Everyone was very happy with their meal! Found this place when we were just passing through town and talked about how good it was for the rest of the road trip! The staff was very friendly and happy to do substitutions. We had tacos, a burrito, flautas, and a quesadilla. So a good sampling. All was good, but true to the name sake, the quesadilla was the best! 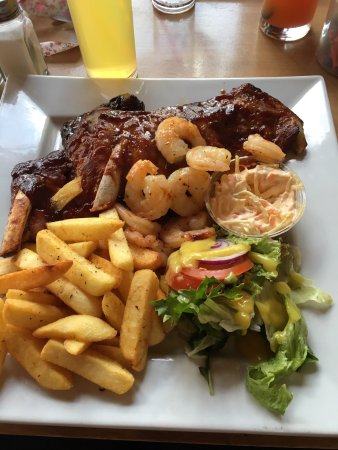 On our road trip from Florida to Colorado stopped in Clint,Texas to eat at Cotton Eyed Joe's because TA review said it was good Roger had his favorite huevos rancheros and loved it. I am not a Mexican food fan so since they didn't have any soup or quesadilla I took the reviewer's advice and had a taco. Like I said i


am just not a fan. But the freshly made taco shell was a nice touch. Roger said he would comeback again .. I will just follow this guy anywhere. 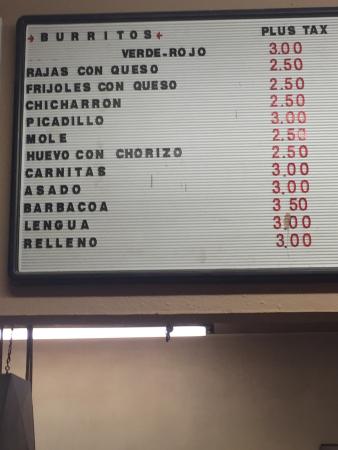 Not far from the historic center and certainly worth the drive. Making homemade tortillas since 1997 and now distributing some 600-800 dozen fresh every morning to the surrounding area. We watched the ladies at work from 4 pm to the early am to accomplish this job by hand. Simple menu with tasty choices. We had rellenos burrito and asada burrito along with Mexican soft drinks. Definitely a great choice. Open from about 5 am every day to 6-7 pm.

My family and I love this place. The food is always good and plentiful. The staff are courteous and helpful. The atmosphere is adorable. The prices are good. They serve nice cold beer. We love to go there for lunch or an early dinner. It is hard to stand out in a town where you can get Mexican food on every street corner, but this place is definitely a favorite. 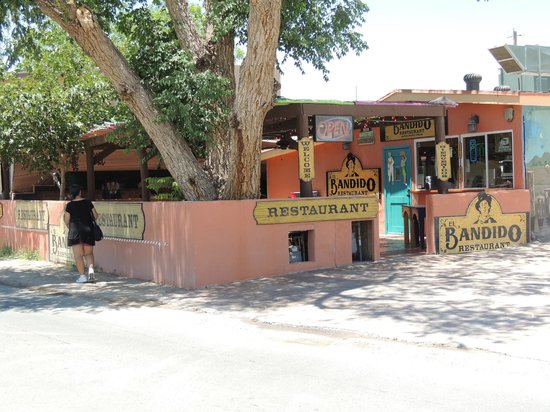 San Elizario Historic District was the turnaround point for me on this long-anticipated bike tour; the primary factor was how long would my injured knee/body hold up? I carried doctor-prescribed meloxicam and OTC ibuprofen, but that was last resort--no need for me to get hooked on drugs (other than caffeine (am), or Mountain Dew (pm; only ingested when bike touring). Anyway, I made it down to this fine community by noon with few physical problems, but it was time to recharge my body once again with a meal! And the hard tacos+refried beans+rice+a huge cup of unsweetened iced tea was perfect! Perhaps better was that I didn't have to move too much from the pleasant, original growth Cottonwood tree shaded patio; Ana took my order, served me up, and handled my VISA credit card without problem.
Manager Harvey groused that the historic Cottonwood tree--one limb bearing the likeness of the most infamous break-in guest in the adjacent jailhouse, Billy the Kid, may have to be removed because the roots were distending the floor tiles. I sure hope not; few of these trees remain after we invaded the area in 1598 (Don Juan de Onate), drastically altered the entire Rio Bravo/Rio Grande flood plain by clearcutting/burning, then planting the invasive, unbelievably thirsty Pecan tree/cotton shrubs/beans/chiles!
Anyway, I was glad to have made it this far without problem (I made it home a few hours later, also without problem other than exhaustion) and thoroughly enjoyed a nutritious and needed meal. I always look forward to coming here, especially mid-day on the weekend as that is when this historic artists community is "open". Early weekdays little is awake, but weekends are always a winner. I particularly felt like a winner--no physical problems, no drugs other than caffeine, no high heat and no headwinds!

Just opened at this location this week. I had the tacos de pollo, hubby had tacos de tripitas. The flavor was superb and the salsa bar is great! No more burgers on break - this is our new go-to! 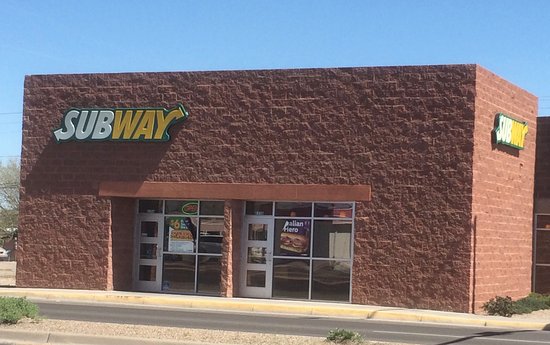 Getting older has it's downside, primarily with physical challenges I could not have imagined ten or twenty years ago. Specifically, my knees were showing the decades of wear & tear (as well as being 20-30 lbs/9-13kgs overweight) when the meniscus (left knee) finally tore in August 2005, which was repaired by gifted ortho Dr. Luis Urrea II. After a few months recuperation & rehab, I was back to pedaling my Doublevision as always, journeying farther & farther, ultimately taking an extra-lengthy 2011 biketour to HoustonTX-USA & AustinTX-USA (where my son & daughter lived, respectively) which is recorded in my 4th book, "Dry'd, Fry'd, and Sky'd by Headwinds and Heat: My 1300mile/2100kilometer Trans-Texas Bicycle Odyssey". It was during this exhausting journey that the Subway restaurant chain became my certain link to healthy revitalization. Consistently, Subway has made the difference in my being able to keep pushing one foot over the next on my pedals. Anyway, I recently had a relapse with my knee, collapsing in my office, and, fearful of greater complications, ceased pedaling until more analysis by Dr. Urrea. Without elaboration, he gave me the simple truth, that the unavoidable equalizer of age was showing itself, that I could delay the inevitable with additional interventions of drugs. Unfortunately, that could mean deferral from my being able to donate at United Blood Services, so I'll R(est) I(ce) C(ompresion) E(levation) instead. But the real test came on Saturday (one of my two days off as a teacher) when I went for my longest biketour in 4 months, what had previously been a half-day tour to the San Elizario historic district in the Lower Valley. I felt good starting out, and continued to do so by the time (noon) of my arrival 22miles/37kms later at Cafe Galeria.
I pushed on, propelling myself West on Glorietta Road to Socorro Road/FM258/Mission Trail. Knowing that I couldn't go much further without ingesting nutrition, my body physically reacted to the sight of a rather recently opened Subway, my saviour of so often before, and before knowing it, my Doublevision was neatly parked in a space. I was inside talking with sandwich woman Kim, constructing a healthy toasted sub that will allow me to continue the rest of my 43mile/70kms journey. Sitting there watching my Doublevision with my leg/knee elevated, slowly sucking down ice-choked water (I had just finished escorting my 84-year old mother overseas for 53 days 07JUN-29JUL2014; drinking water our of the tap was rare, much less having such a plentiful supply of ICE!), I luxuriated in the A/C, savored the sub, and recharged for that final push back into El Paso. As always, this was the best meal i've ever had, and what made it even better was that my knee held up. Now, back to overnighting my biketours, which I believe will go just as well as this--especially when SUBWAY is available! 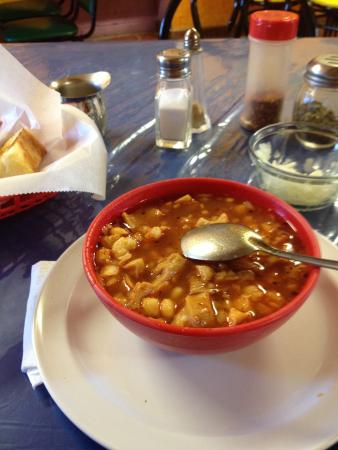 I was a few hours into my annual year-end bike tour, with great anticipation of one or two nights out after full pedaling days in the USA & USM, focusing primarily on Valle de Juarez and my suggested bicycle route for transiting this area. My first extended stop came in the San Elizario Historic District, where I took several pix of the first jail in El Paso County/Billy the Kid forced entry, route signs, and the grist mill/oxen power source. Remounting my Doublevision, my other (right) knee gave one last "snap", resulting in negation of stabiliazation & ambulation. I was barely able to move over to this excellent eatery, where I enjoyed an outstanding combed corrida, beginning with Caldo de Res. Slowly cripping around, I enjoyed much hot/black java as I sated my peckish feelings. This is not a bar, just a great little--important for me!--place to figure out my situation. And a good meal is the best way to assist cognition! I noticed several other brekkie choices, but once you've had caldo de res, you always look forward to the next time. It was particularly appropriate today as there was a bit of chill + wind , and hot sopa is the best way to take that coolness away. What makes this such a great stop is that here in the Historic district, like many artistic coves, virtually all other businesses are closed on Mondays (today was 29DEC2014), so not only could I not walk far nor fast, this gourmet burrito is GREAT! Incidentally, I believe one of the reasons I was able to pedal the 28miles/45kms back home is because of the excellent nutrition and service here.