Most Popular Restaurants in Madill

Madill is a city and county seat of Marshall County, Oklahoma, United States. It was named in honor of George Alexander Madill, an attorney for the St. Louis-San Francisco Railway. The population at the 2010 census was 3,770, an increase of 10.8 percent from 3,410 at the 2000 census. It is best known as the site of the annual National Sand Bass Festival. It is part of the Texoma region. 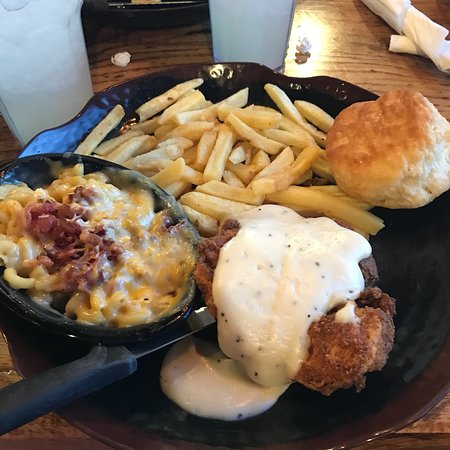 My husband, son and I ate at Hobo Joes while on a fishing trip to Lake Texoma and thoroughly enjoyed the food and environment. The menu is varied with wood fired pizza, burgers, sandwiches, wraps and a few dinner selections. Beer is offered on tap and bottled. My chicken philly sandwich was very good with chunks of mildly spicy chicken, onions, peppers and cheese. My husband's burger was cooked as ordered and also very good. Our son had the catfish basket which was a fairly large portion of breaded and spicy, fried catfish. He proclaimed it to be very tasty. Our meals came with a huge portion of non-greasy, tasty fries. Prices are reasonable. Our wait person and greeter were friendly, helpful, and attentive. The environment is comfortable with tables and booths in a rustic setting. We thoroughly enjoyed eating here and will do so again when in the area. We'd like to try the pizza which looked very good. 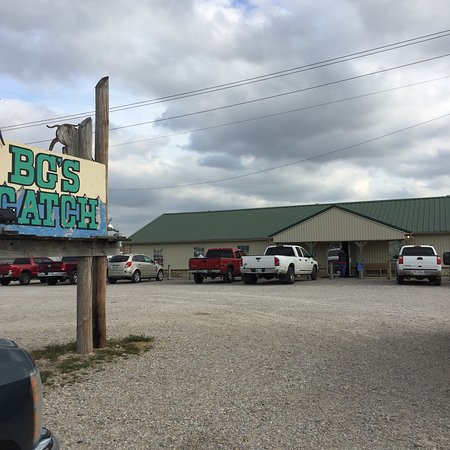 In the summer be ready for a wait (wotth every second ), winner not so bad. Only open Thursday-Sunday and the lake crowd all visit. Set up on a buffet style when is best for this venue, not fancy just great food. Best catfish around and all the sides are great. They make homemade ice cream and peach cobbler for dessert, a meal on its own. Not a place for light eaters. If you are around the lake or within a 100 miles it is worth your trip. 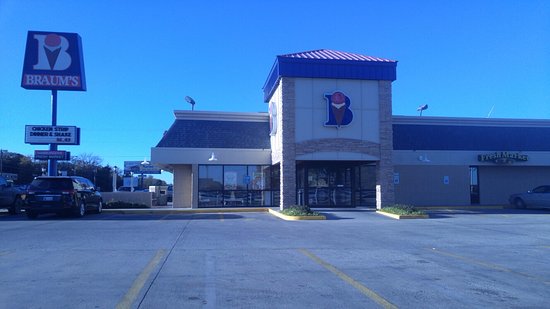 I'd read reviews that made me question my host's choice to go there. I was leary. I ordered the chicken, apple, walnut salad. Large serving for $4.99. It was better than many other fast food salads I've had. Very fresh. Apple slices were crisp. Everyone in my group of 5 was happy with their food. They got burgers, chicken strips (with biscuit gravy). And then we all splurged on single scoop ice cream sundaes. The ice cream is excellent. There is a nice little market with fresh foods as part of the restaurant. I thought it was a cute little place with decent food. Both employees I interacted with were friendly and helpful. 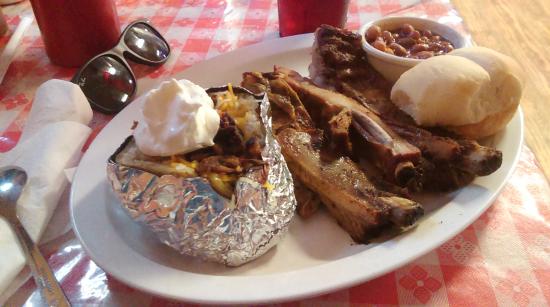 We both had the chicken fried steak and vegetables, all were good. The fresh baked yeast roll was really good. Very friendly home town eatery, even the regular customers told us hello and goodbye. Home cooking, burgers and fries on the menu, all looked good 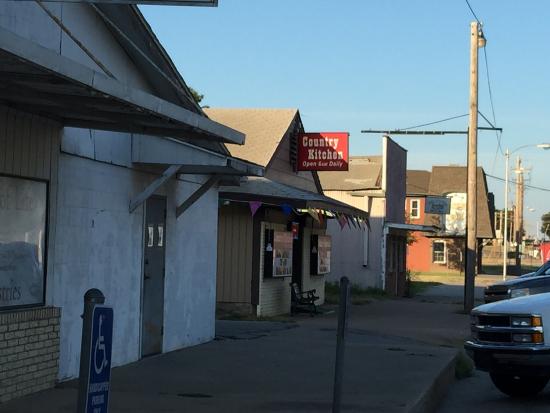 We ate here on a Wednesday morning about 7:30. I had scrambled eggs, bacon, hash browns and toast. My friend had eggs over medium, sausage, hash browns, and a biscuit with gravy. The food was great with the exception of my friend's sausage, it was a little overdone. The hash browns were done exactly the way I like, a very light crunch to them. The service was fast and the waitress friendly. The dining area was clean and filled with trophy size stripers and historical photos, mainly of people. Breakfast is served all day and the place opens at 6 am. The total for our food was approx. $20.

I have eaten at this place for years. They always have consistently good cheeseburgers, and good onion rings. Their fries are also good.

This place is located in the NE intersection of hwy 70 and 70B in downtown Kingston. It usually has a lot of diners in it, especially on the weekends. If you go inside, they have a counter for you to order at, and then they call your name and/or bring it to your table. You fill your own drinks from the fountain or the tea/lemonade urn. They also keep a pot of homemade beans available for you. And they are tasty.

The place is a bit old, and being close to the lake, is decorated with a lot of trophy striped bass and ads for who to hire to help you catch those trophy striped bass. The bathrooms are serviceable. And they strongly support the local high school sports teams!

Most recently, i ate here with with my family and inlaws. The kids, inlaws and I all had burgers and fries/O-Rings, and my wife had the catfish. My was awesome, and judging the overall lack of leftovers, i would say everyone else's was too.

This is a great place to eat on your way to the lake. 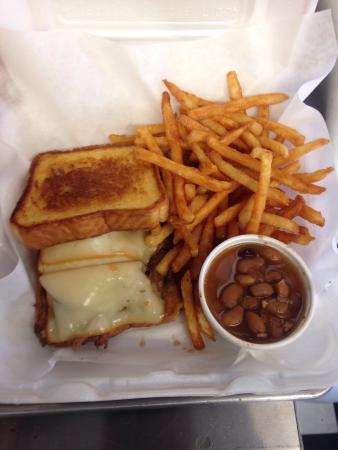 Our first visit here and we were not disappointed. This is not a true restaurant; it is a trailer in a parking lot. The only "sit down" options are several folding chairs around some cable spools....perhaps would seat about 1 dozen people in good weather.
We had pulled pork which was great. They offer about 4 sides; my wife had cole slaw while I had their "loaded mashed potatoes: this was mashed potatoes with shredded port, a bit of BBQ sauce and melted cheese. Also great! 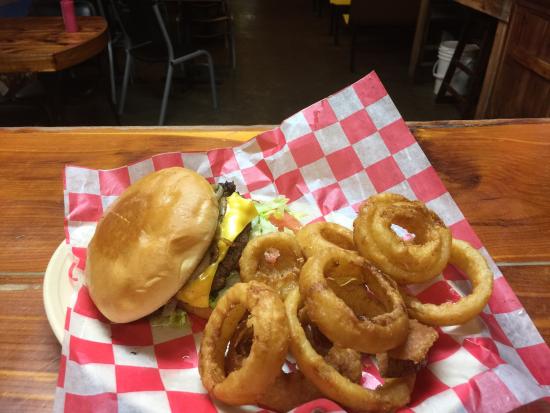 Crossroads is the perfect stop for an old fashioned burger, order of freshly cut home style fries, and sweet iced tea served with a side of country fried Okie hospitality. We serve lunch Monday through Friday from 10 am until 2 pm and close the grill on Saturday and Sunday. We are located in a convenience store and gas station that is open seven days per week.

My dad and i were buying tools at a nearby farm store...asked the guy about lunch options...he told us about this place (it is in a convenience store)...we went there with very little expectations...boy were we surprised!

the burger...i got grilled onions...first of all, it was HUGE....6" bun...the meat had to be 1/2 lb or better...it was bigger than the bun...and full of fresh veggies...the bun was grilled/warmed as well...it was HUGE...we are big boys and we barely finished the burger...the onion rings? those little plastic red woven "burger baskets" you see at Dairy Queen was FULL of HUGE onion rings...my mouth is still watering...i couldn't finish them, but i did finish the burger.

Bottom line? if you are ANYWHERE near this place and you like great burgers at a great price...you gotta go here...and the ladies were so nice there...we asked for directions to another place we were going, each one came by and made sure we knew exactly where we were going...

I can't say enough nice things about this Hidden Treasure...i promise you, if i am ever near this place, i'll be going back. You won't be disappointed, and you won't leave hungry!

If you haven't tried their tacos you are missing out on an awesome one. On Tuesdays they are .99 each with chips and salsa. We love the fish also. We have not eaten anything that we didn't like. Service is excellent. Friendly work staff. You get more than plenty to eat. 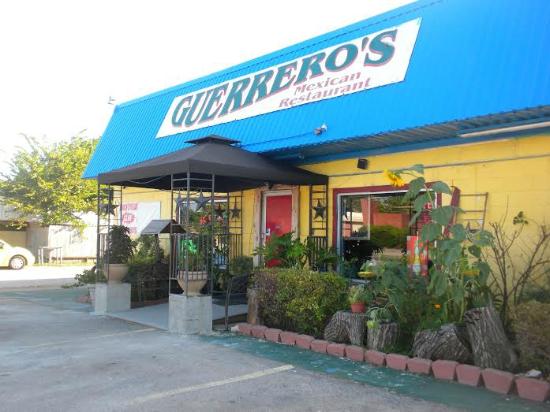 The old saying great things come in small packages defiantly applies here. The wife and I have stopped in here many a time. Each and every time we are treated to the same great atmosphere and food each time. I like to try various things on the menus and after 5 visits I have still not found something I do not like. I recommended anyone in the area to stop in and enjoy a good meal from a great staff.