Most Popular Restaurants in Le Roy

Le Roy, or more commonly LeRoy, is a town in Genesee County, New York, United States. The population was 7,641 at the 2010 census. The town is named after one of the original land owners, Herman Le Roy. The town lies on the eastern edge of Genesee County. Within the town is a village also named Le Roy.
Things to do in Le Roy 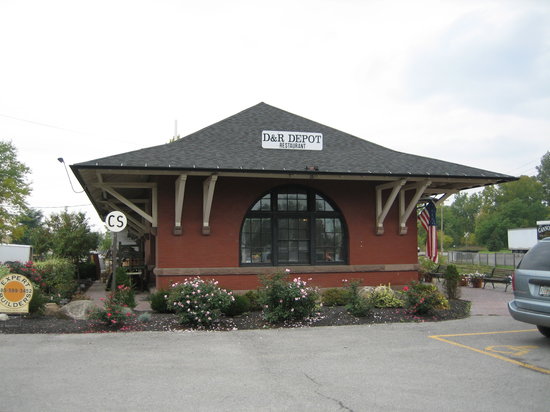 The D & R Depot Restaurant is one of those local establishments that had become almost synonymous with the town itself. It is a very old building that offers a charming setting and a staff that has probably worked there since the railroad was founded. (A little exaggeration there, but not much!) The waitresses are all very friendly, and the manager (owner) made several trips around talking to the diners to ensure that everyone was happy.

My own opinion of the food is probably a bit less than some of the other reviewers here, who are probably more local in their tastes and horizons. (Hopefully that does not sound snobbish, but I do want to be truthful.) The food was all very tasteful, but to say that it is worth a two hour drive in just not really valid. I started with a bowl of the onion soup, which was small for a bowl, but was certainly in line with the price, which was also low. I would have liked it a bit less salty and with more onions. There was a lot of cheese on top, and the scissors to cut the cheese and crouton is a cute idea. But the broth was not quite I expected, so I'd give the soup alone a score of about 3 out of 5. For my main course, I had the seafood pot pie. I thought that the seafood itself was quite good and plentiful, with nice shrimp and scallops throughout. The broth filling beneath the crust was too reminiscent of a can of Campbell's soup; a bit thick and "glumpy." It didn't taste bad, but it wasn't quite was I was expecting either.

Once again, we did think that this was a charming restaurant, and my wife did really enjoy her scallops. And the bread basket was VERY nice...different kinds of hot rolls and cornbread....nice touch! But my two dishes (the appetizer and the main course) were "adequate" without being superb. But I would go back again. 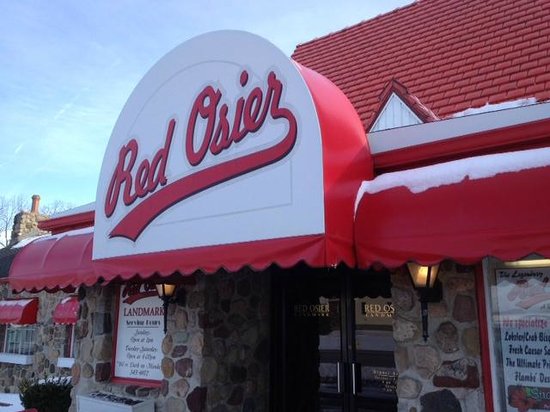 This restaurant never disappoints! This is the first time we have visited right before Christmas and the light display was amazing! We went for my husband’s birthday. Both of us had the ultimate surf and turf-best prime rib and lobster bisque I’ve had! All of the staff was very hospitable and went out of their way to be friendly! 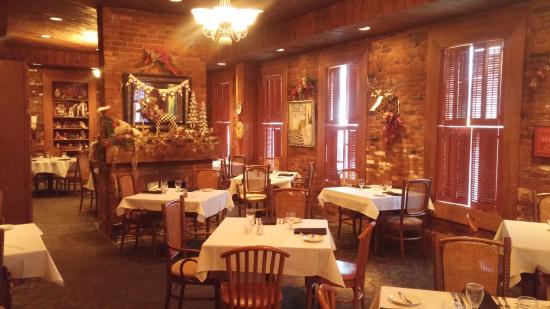 Visited on a Thursday evening. My wife started with beef barley soup. Barley was totally undercooked and sat on the bottom of the bowl like pebbles. Sent back to kitchen. Our entrees arrived and my wife's shrimpscampi all five medium shrimp were under cooked and the centers were tough and chewy. I had veal parm., which was just OK. Heavy on the breading. Both entrees were served with an overgenerous amount of pasta. We asked to have both our dinners boxed to take home. The owner came to our table and insisted on giving us a dessert to share for the inconvenience. She then explained that the barley was cooked that way because by the end of the night it would be mushy. At 5:30 it was raw and we weren't given the time it would be ala dente. When we arrived home my wife discovered that the four remaining shrimp were not in the box.
Over the following week I called to discuss this with the owner on three separate evenings and left a message. I never received a return call.
A good place to have a burger but not fine dining. 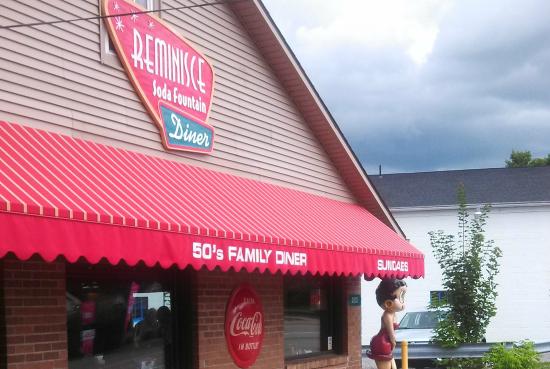 First time at this place after being recommended by a friend.
Well, he was right, its great! We had sloppy joes and fresh batteries onion rings, a huge burger and malts. All delicious!
They have a large selection of old time soda fountain drinks like posphates, egg cream and the malts.
Small lave but well decorated with old photos and items.
Food moderately priced, but the milkshakes will get you in the pocketbook. Staff and owner really nice and attentive.
Caledonia and this location are on Rt. 5&20 so if your passing through its right there for you. 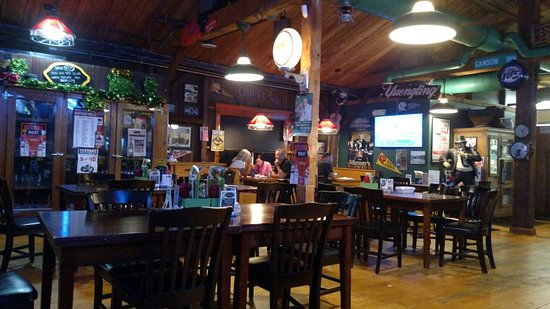 This was our second time at this Mooney's location....thought we would give it another try. Took forever to take our order and even longer than forever for our food to arrive. Again, as with our first visit it's so loud in this restaurant it seemed as though the music was a bit lower but, just a wide open area for the sounds to carry. Prices.... I had a Reuben with homemade chips $9.99 if you want fries it is $3.00 more! The sandwich was good my boys had mac and cheese which they really enjoyed and brought home for leftovers. Something about this restaurant just makes me want to choose a different one to go to ....atmosphere? Price? Noise? Wait time? All of the above ✅ We ate there after friends highly recommended it-and they were right. The Inn has been restored beautifully and tastefully. It has different dining sections which help to keep the noise down. We sat with a great view of the Oatka Creek and will definitely be back when we can enjoy the outdoor seating! It has menu with something for everyone on it, and we look forward to trying other items. But for this trip we had the bread service and seared tuna for appetizers. The bread was very good and the tuna was excellent! For entrees it was the salmon and delmonicos. Both were cooked perfectly and tasted amazing. Desserts were salted caramel cheesecake and blueberry swirl cheesecake. These threw us off a little as the caramel cheesecake was very dense and the other was very light and airy. However, both were excellent! Service was also top notch! Overall, absolutely no negatives and already planning the next trip there. The pub menu also looked great!

Stopped here on our way through LeRoy. Diner wasn't too busy so seated quickly. Staff very friendly.
Good choice on menu and breakfast available all day. Not much on the menu for vegetarians, although I guess you ciuld ask them to adapt items.

Food was good, however one of our four meals came out as the other three of us were well through ours. There was a spaggetti issue. 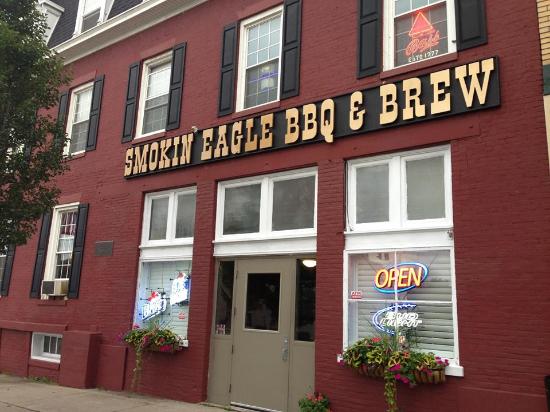 Decided to try out a new place because our usual "let's meet 1/2-way" location is closed on Mondays. We all were very impressed with our first experience here.

The food was *all* on point: portions were generous, very tasty, and the menu offered a larger variety of options than I ever expected. Unfortunately, we can only attest to the "BBQ" and not the "Brew" as we all ordered non-alcoholic beverages.

We didn't have any apps or desserts and our 5 person tab totalled ~$100 which included some of the most expensive options. Conversely, our "closed" location would have been muuuuuuch more expensive and we would have been confined to indoor seating with air conditioning.

NB: As someone who abhors eating anything in public with my hands, this menu had a pleasant variety of options - salads, wraps, and sandwiches - which could be comfortably enjoyed by someone like myself who is always hard pressed for suitable menu options in a BBQ joint.

The wait staff was very friendly, accommodating, and perfectly attentive.

Frankly, we were all blown away by our visit and already have plans to return. 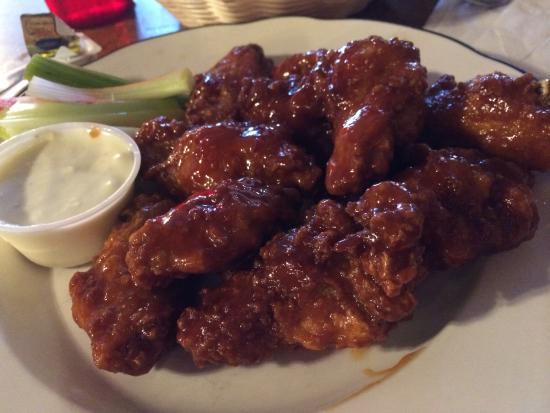 Find a reason to go to this restaurant. Have the wings with SAM sauce, have the white pizza, and have the fish fry. The meatballs are awesome too! Great restaurant!

I went tonight and ordered. I ordered a large pizza, mushrooms, 24 wings, Hodge podge , fried mushrooms . I ordered the pizza crispy but not burnt . the pizza wasn't even fully cooked. Wings were unremarkable , however hodge podge was almost burnt ...pizza land .
.get it together