Most Popular Restaurants in Lake Ozark "Hooks" as it is affectionately known, and it&apos;s friendly staff, strive to make our valued locals feel at home and our tourists feel like locals! We specialize in Steaks, Seafood and offer Happy Hour deals that can&apos;t be beat. Our dining room overlooks a panoramic view of the main channel of the Lake, and offers a relaxing atmosphere to add to your dining experience. Come by and see us!

Took the best care of our needs, very attentive, never did we need to flag her for attention. The bar area was very busy that night and she just kept on keeping on, all with a smile on her face. I understand she's been there...MoreThank you, we apprecite your feedback and will be sure to share the good praises. 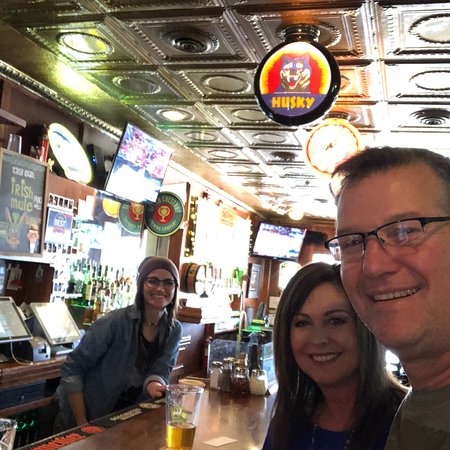 Always get Pappo's pizza every visit to the Lake! Excellent tasty pizza! Nice staff & they deliver as well! Today Christine took amazing care of us, she went above & beyond to make it a pleasant experience. 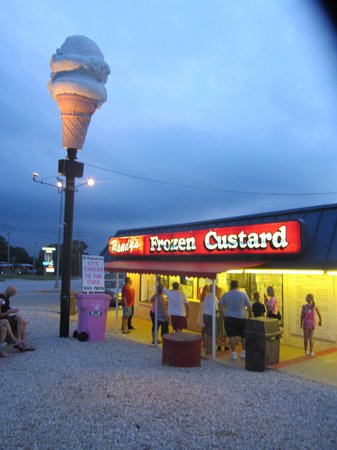 I was here to write a review for this place for a professional publication. They were busy but all I asked was for a recommendation of what I should try. The man was so rude to me. Even my husband was shocked.
Well I did. And I feel bad saying it but Andy's is better. I think Randy's is a favorite among locals because this is a long standing tradition. I get that. But Andy's just tastes better and ... I've never been treated rudely at Andy's ... EVER. No matter how busy they were. 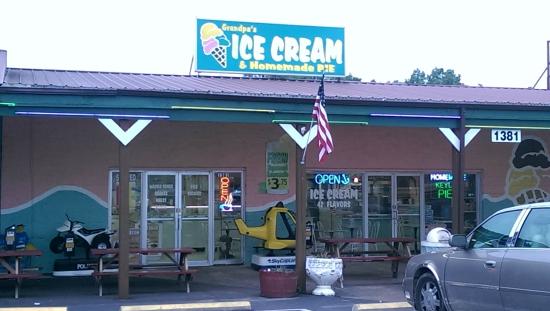 Me and the family have been before.

My sons went with their grandma this week, and they insisted on taking us when we joined them at the Lake yesterday.

Ice cream was good and reasonably priced. Cookies for a dollar is a good price, too.

Full disclosure, I haven't tried the pie yet. YET! 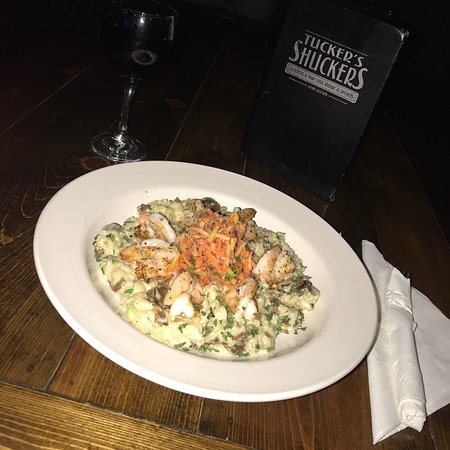 Stopped in here for some drinks and snacks. Got the shrimp cocktail and potato skins. We should've ordered some oysters, they looked great.
Had some beers on draft, they have a wonderful selection.
The desserts looked good but we didn't get any.
Great spot and love the outdoor seating when the weather is warmer.
We'll return. 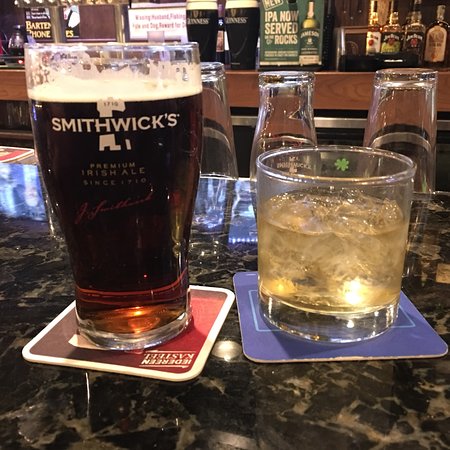 Kilt and Clover is an American Grill and Irish Pub serving traditional Irish serving burgers, sandwiches, salads, steaks and seafood as well as tradition Irish menu items. Almost the entire menu is made from scratch daily. The Fish and Chips are a wild caught Haddock with a home made beer batter that makes for a lite and flaky crust. Homemade mini pies for dessert. Amazing burgers including the famous Cowboy Burger served with a delicious onion ring. Happy hour M-F 1/2 off Apps and $1 off Beers, Wine and Wells. The Kilt and Clover has a full bar with an extensive Whiskey Bar with over 60 plus American, Scotch and Irish Whiskeys which you can buy by the finger measure. Guiness on Tap! Large Parties welcome. Private room 12-18 guests, Banquet Room upstairs for 50.

What a fabulous and exceptional staff!! We came in for bottomless mimosas on Easter Sunday, where we encountered a rather sparsely populated establishment (likely because of the deteriorating weather and in lieu of the holiday). Despite the slow day, the staff was so entertaining and all pitched in to give us the best experience possible. The food was terrific (try the glazed carrots and definitely those Rueben Eggrolls)!!! Willy, Ally, and Alyssa were just a riot of fun, professional service. We can't wait to come back!!!! 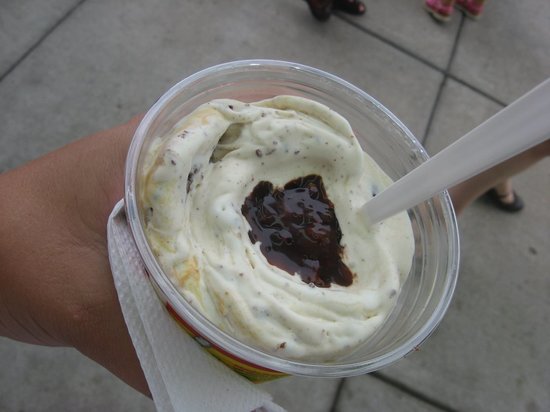 Frozen custard if a popular lake thing and we like Andy's the best - the best thing on their menu is the Ozark turtle modeled after the old turtle candies - wonderful toasted pecans, hot caramel and hot fudge sauce all served over fresh frozen custard - you simply have to try one and you will be back for more 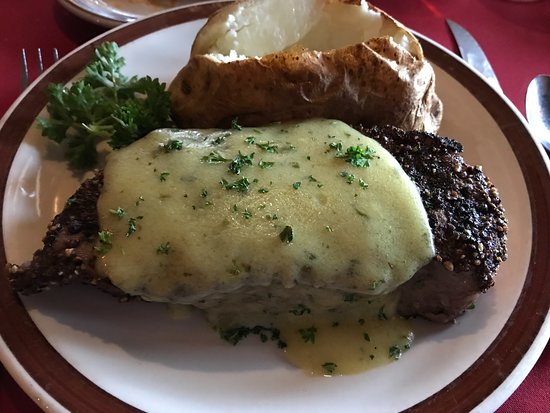 We go for the early bird specials and use coupons when we go. This is some of the best food at the lake! Fantastic view too. 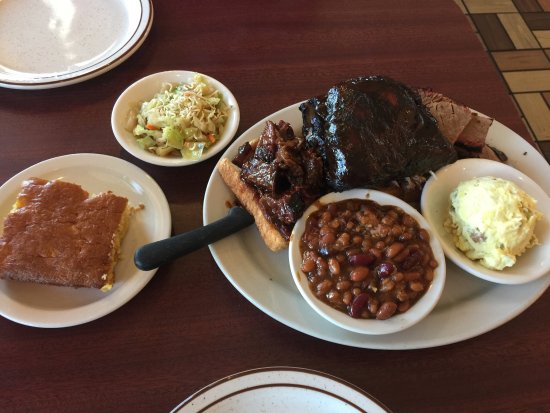 We went on a Saturday evening about 7:15. Not too crowded and sat quickly. Nice family atmosphere. Waitress was nice. They were out of smoked and pulled chicken. They only cook so much, so go early or call ahead if you want something special. We shared the meat sampler with 2 sides. The ribs, brisket and pulled pork were very good. The burnt end were tough, but good flavor. Our concerns were we had to ask for tea refills and we've never been in a barbecue place where they didn't have hand wipes. We wouldn't hesitate to return to try the chicken (1/2 chicken for $11.45 with 2 sides) 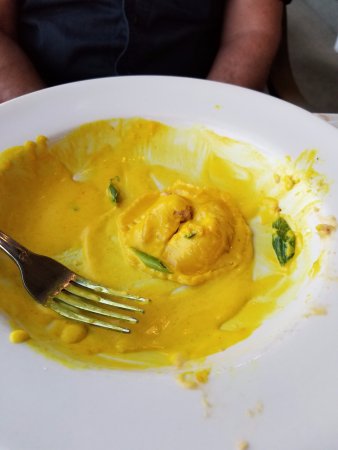 First, I want to say that I am in the minority here with my review. On average this establishment has excellent reviews. I also understand that owning a restaurant is hard work, and much of it is very personal.

That being said, I am flabbergasted at the low level of food preparation, presentation and professionalism I experienced at Ruthie D's. My husband and I drove in from Columbia, to have a night away from home. After reading the reviews, we opted for Ruthie D's as we had already been to JB Hooks . As the weather was perfect, we sat outside with a view of the lake. Our server brought our menus and asked about starting with a drink. She was very attentive and did not rush us through the entire process, which I appreciate. We had the Spinach and Artichoke dip to start. It was very very good. We settled in with our glasses of wine and tucked into our starter with anticipation of our entrees. My husband ordered the seafood ravioli, and I ordered Ruthie's Signature Filet. This was touted as a 5 oz filet with a homemade crab cake on top, with homemade bernaise sauce. Our entrees arrived and our first impression was that the "champagne butter" sauce on my husband's ravioli was iridescent yellow. As in a French's mustard yellow. The sauce was good, and I commented that there was tumeric in it, hence the color. However, he insisted it was mustard and did not finish the dish. The ravioli themselves were good, and seemed homemade. On to my entree. (sigh). My 5 oz filet was about an inch thick, if that. As I cut into it and took a bite, I could tell immediately that it was well-done. It was Grey. (Stick with me folks because color plays an important factor here.) I asked for medium-rare. My husband and I sampled the crab cake which was very good. As our server asked about entrees, I pointed out that mine was well-done. She immediately apologized and offered to take it back. She then returned and told me "the kitchen wanted me to tell you that sometimes the COLOR is different out on the patio, as it is in the kitchen. This happens all the time. But, they are redoing it." Huh. I don't think I'm color blind, but I thanked her and awaited my order again. She then brought a plate containing the following: a steak that was clearly "blue", my half-eaten crab cake (what?) and the sauce ON THE SIDE. Not only was the steak still wrong, but they didn't bother to plate it again! I sent it back again and told her I was done, thank you. The owner (I think) then came out with her phone. She said she heard I had trouble with the doneness of my steak. She then proceeded to show me a PICTURE of my first entree, taken in the kitchen to "show me" that the lighting looks different sometimes out on the patio. The picture was of a perfect cut of meat, much thicker than mine, with a ruby red center. There was no apology, only a defensive owner trying to show me that I evidently was color blind. NEVER, and I mean EVER in my years of going to restaurants (both here and abroad) have I had an owner/manager not only try to try to prove me wrong (by the way, I know what medium rare tastes like too), but slapped my face with a half-hearted attempt at correcting the situation, which to me suggested "you don't like my food? here, take this then." I asked about the tackiness of placing my eaten crab cake back on my plate, instead of presenting the dish properly and she said "you had eaten half of it." Shen then went on to say she'd lose money if she had to recreate crab crakes. What? I told her I wouldn't pay for it, and she agreed to this - but again NO APOLOGY. This was a very expensive restaurant, even for the location. As the customer,I was wrong. Wow. I will never go there again. Should have gone to JB Hooks as we had originally planned. Or, as a side note, pulled up our chairs to the table behind us who were ordering items such as mussels which were not on the menu. Guess I need glasses, or a VIP standing.