Most Popular Restaurants in Bristol

Bristol is a city in Sullivan County, Tennessee, United States. The population was 26,702 at the 2010 census. It is the twin city of Bristol, Virginia, which lies directly across the state line between Tennessee and Virginia. The boundary between the two cities is also the state line, which runs along State Street in their common downtown district. Bristol is a principal city of the Kingsport−Bristol−Bristol, TN-VA Metropolitan Statistical Area, which is a component of the Johnson City−Kingsport−Bristol, TN-VA Combined Statistical Area − commonly known as the "Tri-Cities" region.
Things to do in Bristol 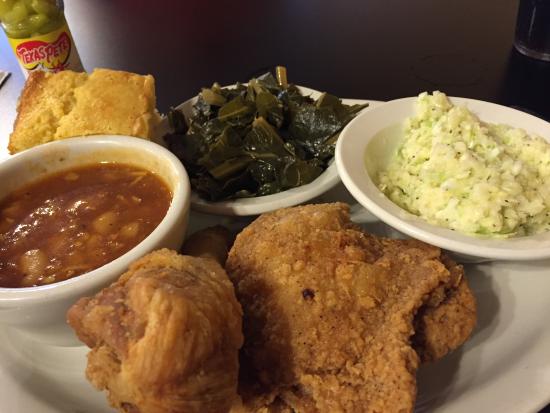 Established on December 10, 2007 located in the historic downtown area of Bristol, VA/TN we continue to serve the best homemade food just like Grandma used to make.

This place suffered from irregular open times but has improved lately. The food is consistently delicious and the service is polite. However, it is not the place to go if you are in a hurry as the food will take time to arrive after you have ordered. My favorites are the fried catfish, fried chicken, and the ribs. 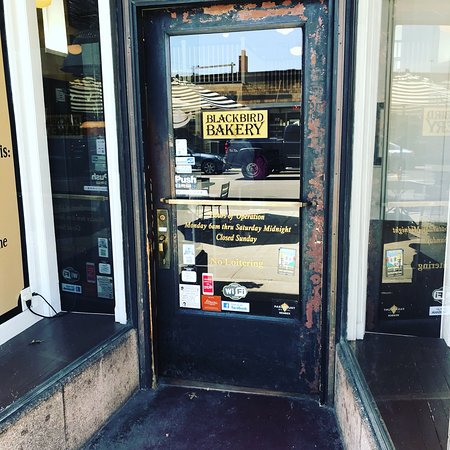 I was not a huge fan the first trip we went but my hubby loved it.
So we returned and this time he was not a fan and I actually got something I liked.
I purchased a triple brownie sundae and the strawberries and brownie were completely on point.
My hubby loved the banana pudding last trip and this trip it was not good at all. The bananas were not even ripe.
Service was fast even though there was a line out the door.
This place is hit or miss though with food quality. 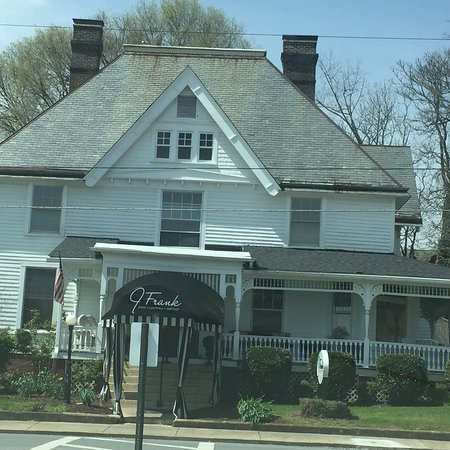 My husband and I had a date night dinner at J Frank tonight. The restaurant is in an old house and has such a great atmosphere. The chairs at our table were amazingly comfortable and we could have sat in them relaxing by the fire for hours. We enjoyed the salmon dip appetizer to start. My husband isn't a big salmon fan and he loved it as well. He had the Caesar salad and I went with the wedge. They were both delicious and their dressings were amazing. Their rolls are homemade and the best I've had in any restaurant, especially locally. We both went for the steak, him the 10 ounce filet and I the steak with crab cake (pictured). As the previous courses the main did not disappoint either. We were too full for dessert but the selections looked amazing. The staff was friendly and worked as a team to ensure your glass never went below half full.

If you're close to Bristol and looking for a great dinner with wonderful service you must try J Frank. 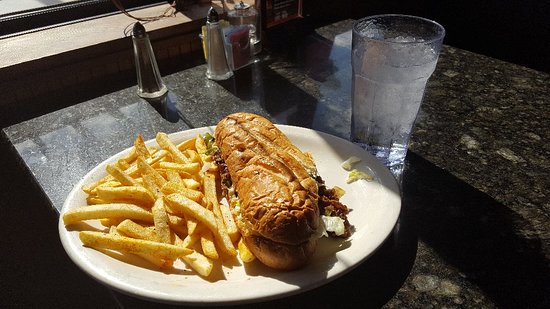 We were visiting Bristol for the first time and selected this restaurant for dinner after comparing reviews on TripAdvisor. We all three ordered different items and each of us were very pleased. We first enjoyed the Greek appetizer platter, which the best and freshest pita bread any of of us had ever had. In addition to great food and good, friendly service, prices were very reasonable. This will be our restaurant of choice if we find ourselves back in Bristol. 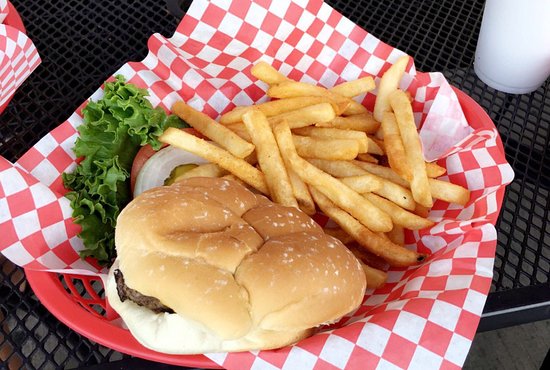 It's one of those places that just looks like it would be good, from the outside. It is pretty unassuming.

The burgers are far from it. I had Shawn's cheeseburger and it was big and tasty. I also had the parmesan fries and they were great. My wife had the c-burger and sweet potato fries. She loved it.

The server was wonderful. She kept the tea glass full, and checked on us periodically.

Good location, just off Main Street. They even have a few tables on the sidewalk for outdoor dining. 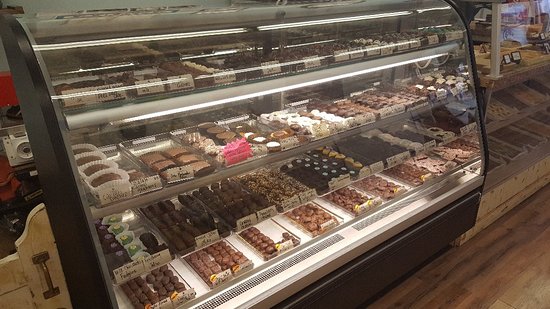 The Southern Churn is a really cool ice cream and candy shop. We make Homemade Fudge and we also have a large selection of Fine Chocolates, 48 flavors of Jelly Belly jelly beans and lots of old-fashioned candies!

Tis is the pace to go for candy and ice cream! The fudge is fantastic and makes a great hostess gift...if it lasts that long. Usually doesn't.Randall thanks for the Tripadvisor review! We are so glad that you enjoyed your visit. Come back and see us again soon.

Great Steakhouse the best Steak around And Sides. The place is old the Food is new. Service is Great would recommend for any family there's no place in the world any better we cannot wait to go.back thanks for the new owner great job Cootie Brown's makes really good sandwiches. The menu has something for everyone - from tamales to venison burgers. I had the Cootie's Club Sandwich. If you have a hearty appetite, get the whole sandwich. Otherwise, a half portion will more than likely leave you stuffed. If you get a sandwich, get the potato chips to go with it. They are cooked in house and worth it! 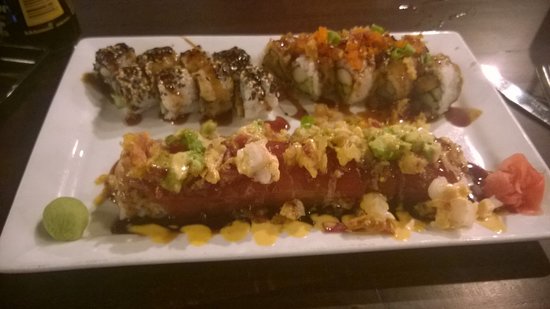 This large pretty, brick walled, high ceilinged, rustic cafe in downtown Bristol served large portions, had an eclectic menu - from burgers ($11-13) to Thai ($13)/Sushi($6-14) food - and provided OK service. We had the Lamb Lollipops appetizer ($12), Dynamite Sushi roll ($10), and Thai drunken noodles ($13).
* The Lamb lollipops were the big winner because it was large and perfectly cooked.
* The Dynamite roll is ok, providing small to average sized shrimp tempura battered and fried. It was then encased in rice, which takes the tempura crunchiness away.
* Avoid the drunken noodles. It does not look or taste like Thai drunken noodles. 620 State’s version is too salty. I looked and tasted like linguini doused with soy sauce. They use uniform pre-made egg noodles instead of the traditional thick, gummy irregular shaped handmade Thai noodles that are fried in a spicy oil with basil and a sweet soy sauce. 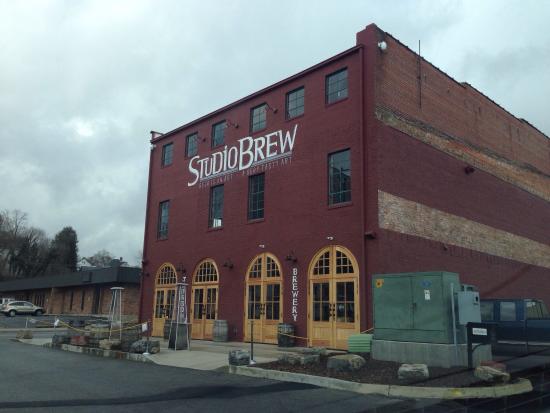 We are a Microbrewery with a Taproom that serves over 20 of our Artisan Craft Beers and a non-alcoholic Craft Root Beer. We have a very impressive wine list and we have introduced a very creative mixology program with beer infused cocktails. All our food is prepared fresh and to order. No prefab, no microwaves only fresh ingredients daily. Our limited Tapas style food offerings are created by our Chef&apos;s for an enjoyable pairing. Many of our food creations incorporate our craft beer, spent grains and even dried hops for an eclectic experience. The Master Brewers family recipes are also available. His Mother&apos;s Hungarian Goulash & German Potato Salad and his Oma&apos;s Sauerkraut Balls & Spaetzli has been handed down for all to enjoy. A European style of dining so relax and enjoy the company of family and friends old and new to be made.

First off the place hardly had anyone at 9:00 on a Friday night, so that should have been my first warning.
We ordered a couple of tasters and for the first time ever at a brewery did not care for any of their beers.
This is not a quality brewery to me.
We ordered pretzels and cheer sauce. The pretzel was so hard it was inedible and the cheese sauce did not taste fresh.
Service was decent but not great.
This is not a brewery I would return to.