Most Popular Restaurants in Bethlehem

Bethlehem is a city in Lehigh and Northampton counties in the Lehigh Valley region of the eastern portion of the U.S. state of Pennsylvania. As of the 2010 census, the city had a total population of 74,982, making it the seventh largest city in Pennsylvania, after Philadelphia, Pittsburgh, Allentown, Erie, Reading, and Scranton. Of this, 55,639 were in Northampton County, and 19,343 were in Lehigh County.
Things to do in Bethlehem 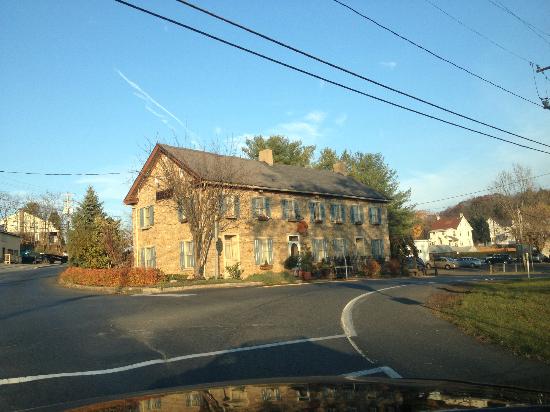 I have been wanting to visit Bolete for a few years. My wife is not a fan of French food, so never top of the list on date night. Finally convinced to her to come along. We arrived just a few minutes early, and decided to wait on a better table. The place is very quaint, and full of character. Not very big, but tables are spaced such they don’t feel cramped. Started with drinks in the bar. They were good, although could have been colder. The wait staff is exceptionally friendly and attentive, and were more than accommodating for my wife’s selective taste. I started with Foie Gras, which was not listed, but Chef still had a piece available. My wife started with chips from the bar. Both were very good. The Foie gras was gilled, and served with a bed of greens and polenta, the combination was excellent. My wife chips were also very good. For main course, my wife ordered ribeye steak and I ordered wild bass. The bass was exceptional, and served over a bed of squash, mushrooms and bacon. The flavor of the sauce was amazing. My wife’s steak was cooked perfectly, and server with mashed potatoes. The steak was good, not great. For a ribeye, did not have as much taste, and was a little tough. The potatoes were very good. The biggest disappointment was the wine. The wine list is very limited, and the nicer bottle we ordered was just average. I did find out later can bring your own, although with a $25 corking fee. That seems a little high. For dessert, had the chocolate mousse tart and two coffees. The dessert was very good, although the coffee was a little weak. I also ask myself, would I recommend and would I go back. The answer is yes to both. The rating of 4 vs 5, is that it was not the perfect meal for the reasons I list above, but that doesn’t take away from the fine food being served. 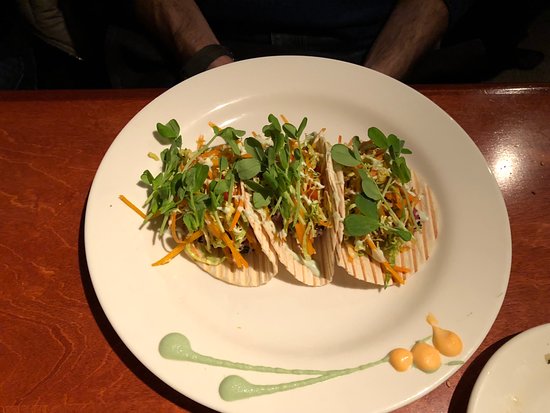 This restaurant is consistently high quality. We have been going here for years— mostly for date nights or special occasions. Our most recent visits were a Saturday brunch in October and a full dinner visit in February. I think Carrie was our server both times. For brunch, I had soup and a shrimp small plate... both were excellent. For dinner, I had my go-to appetizer, which is the lobster ravioli in a sweet and spicy sauce (there is nothing like it), and the duck entree. Everything was good about the entree: the meat, the green beans and the mushroom risotto. Desserts were delicious! I’m looking forward to our next visit. 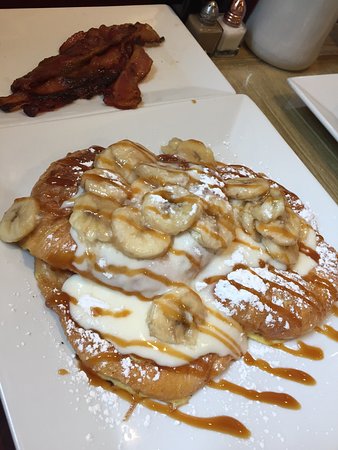 Inventive and delicious breakfast menu. Traditional standbys are available, but we couldn’t resist unusual items such as the seasonal quiche and the Full Monte breakfast sandwich on ciabatta roll. Portions are generous, and coffee cup is bottomless. The staff is friendly and the place is small and bustling. We arrived early enough to secure a table, but the remaining tables and counter seats quickly filled up. Parking is on the street, but we had no difficulty. Definitely worth a visit. 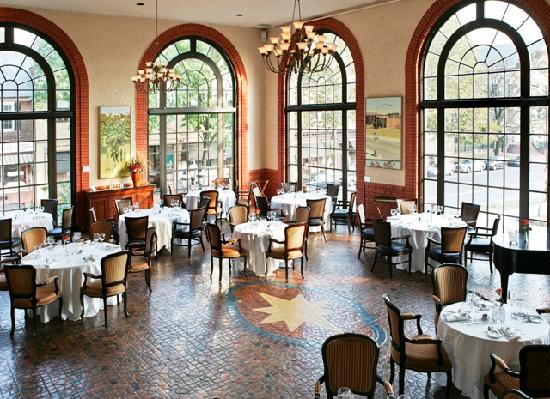 It is the desire of 1741 on the Terrace to engage you and invite you. Try something new or revisit something familiar; but above all, enjoy. Relax in the ambiance of the room, with its beautiful Moravian tile floor and soaring Palladian windows. Admire the charm of downtown Bethlehem with buildings and history dating back to 1741 when the town itself was founded. The menu changes seasonally, with locally-inspired dishes by Executive Chef Michael Adams. The wine list is extensive -- with many exciting options from America and around the world. Our experienced servers are also available to aid in your wine selection or suggest custom pairings to the menu items upon request.

LOVED our meal here! The décor is amazing - quintessential downtown Bethlehem! Everyone in our party loved their meals (apps and desserts too!)Dear Liz L: Thank you very much for you kind review and sharing your dining experience in our 1741 on the Terrace. We are happy that you enjoyed your dinners and how beautiful Bethlehem is especially this time of year. Please visit us again soon! 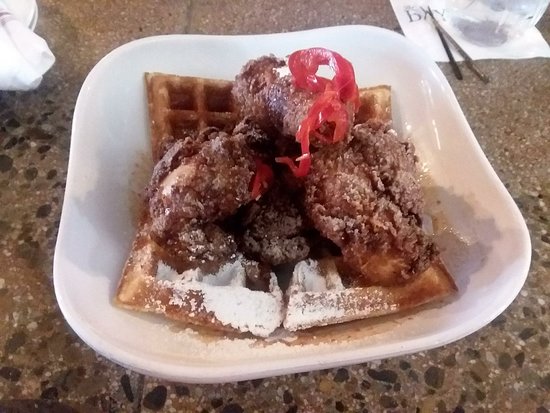 We've been to the Bayou many times and our most recent visit was an experience like the others: just great! Several favorite dishes include the fried chicken that is served with a sweet potato mash and pickles, the shrimp and grits, and the macaroni and cheese with pieces of pork in it served in a skillet. They've got a nice beer and drink list. The Voodoo Juice is awesome.
The service is always good and serves are very friendly. Plan on making reservations whenever you go because it's always crowded. 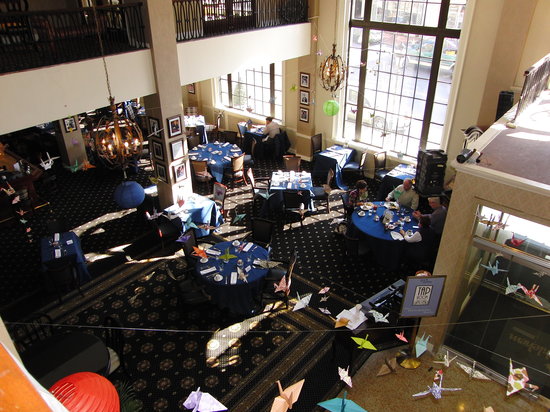 Casual yet elegant, the Tap Room offers the most sought after views of Historic Main Street and its Victorian charm. Enjoy Breakfast, Lunch or Dinner, or lounge by the vintage mahogany bar. We also invite you to check out Jazz Night every Thursday, featuring live musical performances, and our award-winning Sunday brunch.

Our breakfast was included as part of a Christmas package, but you do not have to be a hotel guest to eat here.

The Tap Room is the lesser of the two restaurants in the Historic Hotel Bethlehem, the other being very upscale. That said, the Tap Room is a lovely setting. It is an open area within the hotel's lobby. Two story windows make the room light and airy, belying the term "tap room." There is a full size bar, but this is more than a tap room with pub grub. On the walls are signed photos of all the famous guests (mine will up there next week...LOL). They even have a brochure at the table that lists all the photos and their locations. Republicans and Democrats are on two separate pillars, which is probably a good thing. The names run the gamut from Winston Churchill to John F. Kennedy, and from Shirley Temple to the Dali Lama.

The only negative of our hotel visit was the extended wait we had for our breakfasts in the Tap Room to arrive at our table...more than 30 minutes for eggs. Seeing others served who were seated after us, we questioned the delay. When the meals finally arrived, the eggs, sausage and toast were all cold. It appears that the kitchen is quite a distance away (might not even be on the same floor), and meals need to be delivered covered and by wheeled serving trays. Since we had waited long enough, we weren't inclined to have new meals re-fired. I requested and received another order of warm toast for my coffee. Being disappointed at what we anticipated to be good meal, I mentioned it at check-out. I asked to be comped the parking charged and that was not a problem (although I should not have had to ask).

All in all, this was a one-off visit for us. I might consider lunch if I were to return, but would avoid a hot meal. Welcome to McCarthy&apos;s Red Stag Pub and Whiskey Bar. Experience a taste of Ireland and the British Isles at Bethlehem&apos;s Celtic Pub and Restaurant. With authentic Irish and British Isles food made from scratch, a full bar, an extensive Irish and Scottish whiskey menu, and a family-friendly atmosphere, McCarthy&apos;s is the place for a true Celtic experience in the Lehigh Valley. Created to preserve Irish family traditions and memories passed down through generations, it is a perfect place to celebrate life&apos;s special events and everyday happenings.

Stopped in after a steel plant tour. Felt like a pub in Britain (the cloud cover and temp helped). Hubby had a Blacksmith (Guinness and Smithwicks) and I had a nitro Killkenny. Both were very good. We both split the cottage pie and chicken tikka masala (as one does) and the cottage pie won hands-down. Masala was not creamy enough for me, but the cottage pie was to die for. Then we had scone (bread) pudding for dessert which was surprisingly good (I'm usually hit-or-miss on bread pudding). Using scones gives it more substance and it wasn't mushy at all. A little less sweet, but then the drizzle of syrup was super sweet and exactly the right amount.

First time to Bethelehem, and now if/when I come back I'm going to have a hard time forcing myself to go somewhere else. 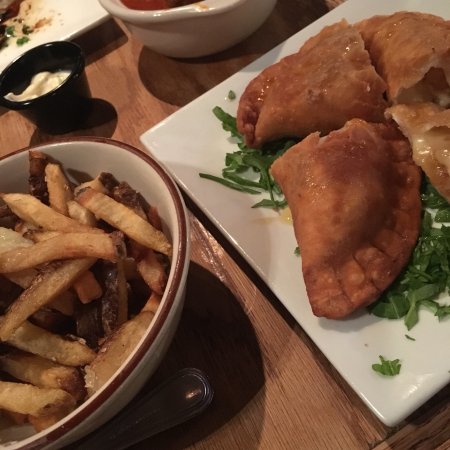 After a day exploring the Christkindtmarket and the Hoover Mason Trestle, we stopped at the Tapas on Main. The restaurant owned by chief/owner Rafael Palomino is adjacent and attached to Cachette Bistro & Creperie. This is no coincidence since Palomino also owns Cachette. I you are lucky you can find meter parking right in front of the restaurant. If you are unlucky, Tapas on Main offers 2 hour validation parking at any downtown Bethlehem parking garage, just ask any server/bartender for a ticket. Other things I like about Tapas on Main are their menu and prices are posted on the front window, their three flights of sangria for $10, $20 pitchers of sangria during Happy Hour, lunch specials, but most of all the flavorful Spanish cuisine. We loved the Costilla de Cordero ( grilled baby lamb chops with roasted fingerlings with fig balsamic glaze ($14.95) and their Spanish flan with fresh berry coulis ($6.95). Portions are generous and prices are very reasonable. When I visited the two restaurants were full with a 20 minute waiting line. I was fortunate enough to be seated right away but service was slow. This was not a problem for me since I enjoyed seating by the window and conversing and people watching on Main Street. Note the Tapas on Main is almost directly opposite the Bethlehem Hotel. 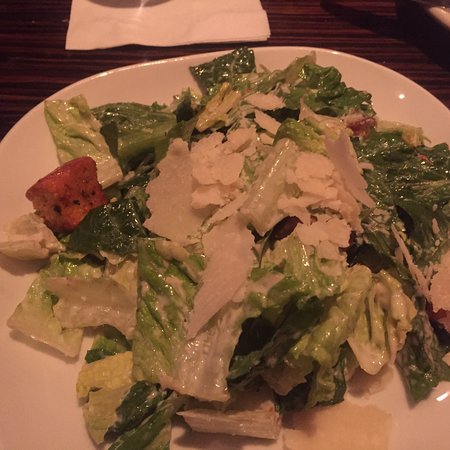 Welcome to the "new" blue. You will be pleased to know that we continue to offer the premier cuts of steak and fresh seafood that you have come to expect as well as an eclectic blend of internationally inspired specialty dishes. Our new wine list features many classic favorites and artisan varieties. Gracious, expert service and our newly appointed dining room help create a truly memorable experience for dinner or lunch. Enjoy unique martinis, cocktails and cognacs in the relaxing bar. We are proud to introduce our new fire side dining room. You can look forward to our new alfresco high energy bar opening in April. Join us for happy hour from 5pm to 7pm Monday through Friday! blue is convenient to major highways leading from the Lehigh Valley, metro New Jersey, Philadelphia and the Poconos.

Blue is conveniently located off of PA 33, with ample parking. The banquet rooms for business meetings are functional. The service is fine. This time I was a bit disappointed with the food. The tossed salad was a bit boring. The filet (done medium) lacked firmness, and was "soggy" on cutting (pictures). The dessert was nice in appearance (picture) but the cake component was dry and the filling was a bit hard, and had the texture of cold Crisco. 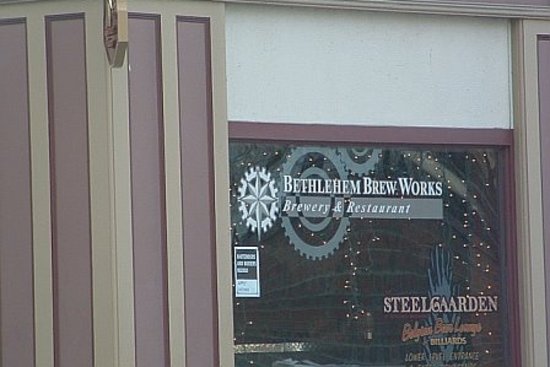 Established on April 15, 1998 by the Fegley Family, the Bethlehem Brew Works successfully captured the essence of Bethlehem’s steel industry in a 250 seat brewpub. Accompanying the handcrafted beers brewed right in the restaurant is a full bar specializing in single malt scotches, small batch bourbons, and specialty martinis.

Had the chance to visit here when traveling for business. Everyone was warm and welcoming atmosphere was relaxed and pleasant we stumbled in during Trivia night and you would have thought we were a local. It was awesome! perfect way to spend a snowy January evening in Bethlehem Pennsylvania