Find out what Mediterranean restaurants to try in Sharon. Sharon is a town in Norfolk County, Massachusetts, United States. The population was 17,612 at the 2010 census. Sharon is part of Greater Boston, about 17 miles (27 km) southwest of downtown Boston.
Things to do in Sharon 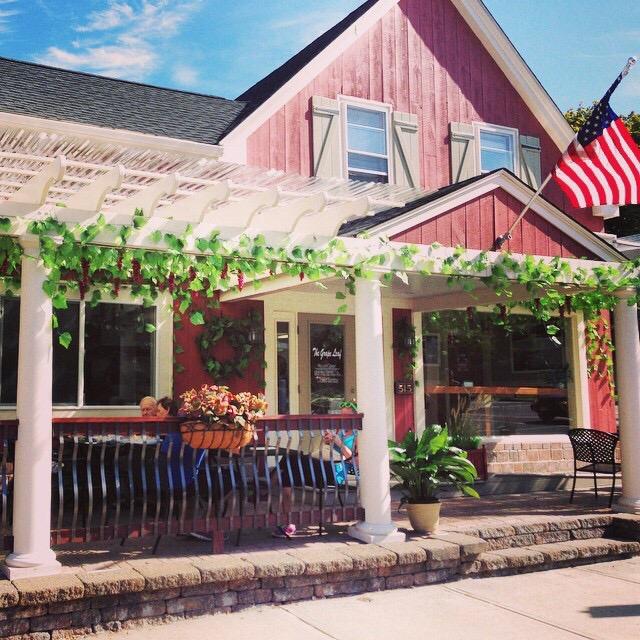 Located right in Canton Center is Grape Leaf, a Lebanese, family-owned restaurant which dishes out some very tasty dishes. On my numerous trips there, mostly for takeout, I've been very pleasantly pleased by the quality of the food and the overall experience and service. Their hummus is outstanding and their wide variety of dishes available is pretty impressive.I'm a fan of their hommos ($6.50), their baby bhanouj ($7.50) and many of their other appetizers available. They're easy to share and I frequently snack on a few things while I wait for my food to be ready when I'm there and don't order in advance for takeout. Their sambousik ($1.65), a fried pastry pockets stuffed with ground beef, onions & spices is one of my go-to snacks.I've rotated many dishes for their main and don't really have a favorite - their moussaka ($8.50) is a nice vegetarian option for the eggplant lovers and their kafta kabob ($12) always hits the spot for me as well. They have so much available that I keep discovering new things. One thing that was recommended to me by one of the staff members is the lamb, which I plan on trying next time. Everything I've had has been tasty.They also have outdoor seating and on weekends, when the weather is warm, they even bring a special oven out and bake fresh bread. Oh and you can also order online, which is super convenient and there's plenty of street parking as well as a private lot. What more could you possibly need? 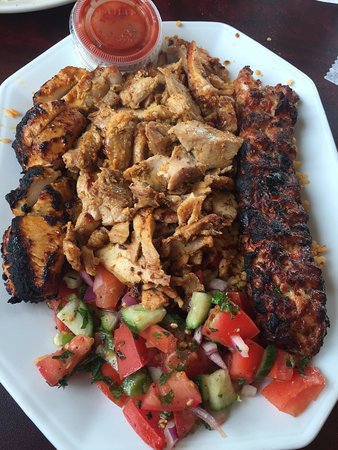 If you're looking for a good spot with many healthy options, great portions, and great value, the Gyro and Kebab House in Norwood has you covered. For those that might be new to Turkish cuisine like I was, it has elements and flavors similar to those from Greece and Lebanon. The flavors are so fresh and vibrant. The Babaganush is outstanding. 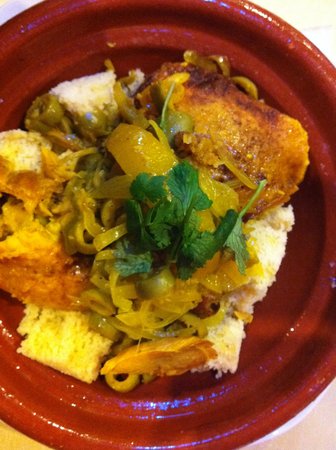 We met friends here for dinner on a Friday. A small family run place where the owner will probably also be your server. The interior is very plain, tables and chairs suitable for a lunch place. The menu was quite large. We had the Mediterranean bruschetta and the Moroccan zaalouk for appetizers. The bruschetta was quite large and had tons of flavor. It was easily large enough for four people. The zaalouk was smaller and very good but not as flavorful as the bruschetta. There were so many tempting choices for entrees that we had trouble deciding. We decided on the walnut & date chicken tangine and the zitoune chicken tagine. Both tangine arrived with the traditional tangine top over the plate. The walnut and date tangine was served over couscous and was sweet, crunchy and just plain yummy. The zitoune chicken was in more of a broth surrounded with small potatoes and served with bread. The chicken was very delicious and we soaked up the broth with the bread. For dessert, we had the red velvet cake (only made once a year) and the almond cake. Both were absolutely amazing- full of flavor but not too heavy. The perfect ending to a scrumptious meal. 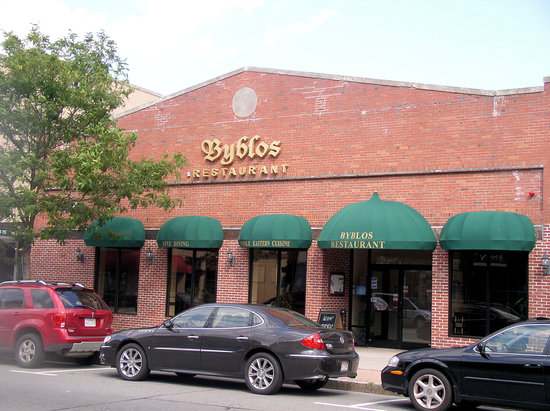 Maurice Daaboul and familyâs Byblos is the Boston areaâs premier eatery since 1996 for authentic, homemade Lebanese cuisine. Located in the heart of Norwood, Massachusetts, Byblos offers all the best features of Lebanese dining, including a large hall whe

Oh this place is great! The portions are huge and always delicious. If you love Lebanese food, you will love Byblos. It has been in business a long time and the owner is the most pleasant man. Some of the staff have worked there a long time so it must be a good place to work. They do a great business. The menu has the usual offerings but they also have specials which are great.

Where to eat Chinese food in Sharon: The Best Restaurants and Bars 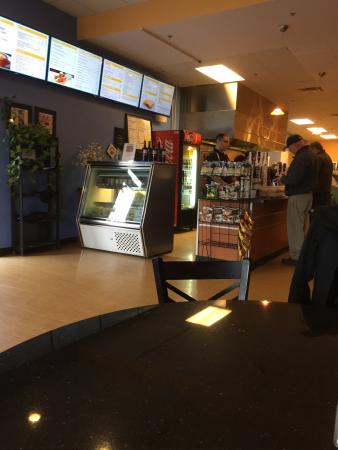 We come here whenever we are in the area. Always get the chicken kebabs, gyros and desserts. The Greek dressing is my favorite dressing of all time, the fresh grilled chicken is better than I can make at home, and the feta cheese used in dishes is way better than supermarket feta. I think prices are more than reasonable and service is always kind and courteous. The crowds inside are a testament to the placeâs excellence. Also ordering online for takeout is super convenient.

For a town steeped in Israeli heritage, itâs downright shocking that Sharon has for so long failed to land a restaurant that pays proper homage to the exotic Middle Eastern/North African cuisine of its ancestors. That is, until now. Simcha, lovingly named after chef/owner Avi Shemtovâs (a Sharon native himself), and in Hebrew translates to âjoy,â recently opened its doors in Sharon Heights (historically, a revolving door of fledgling shops and countless Asian restaurants; hopefully, the eatery will reverse this trend) following its initial manifestation as a Roslindale pop-up. Prior to that, Shemtov â whose father, Yona emigrated from Israel to the States to fulfill his dream of becoming a chef â served more traditional Israeli cuisine (think falafel and shawarma) out of his highly successful Chubby Chickpea foodtruck for nine years. Simchaâs menu, however, veers more towards what is best described as modern Israeli cuisine (i.e.: not your average bubbeâs receipes from the Old World). Think sharable, Middle Eastern-inspired tapas and youâre on the right path. Step inside, and the restaurantâs cozy, swanky interior will surprise you. Behind a frosted glass window (in which the skyline of the city of Jerusalem is deftly painted) and a black curtain, you may initially think youâre walking into a secret speakeasy establishment. To the right, thereâs a mid-sized bar dimly illuminated by funky lamps that playfully and proudly display Jewish star insignias. The main dining room is tiny, yet intimate, seating roughly two dozen patrons. The restaurantâs name is boldly painted along the left wall, along with the mysterious punim of a woman (my guess is itâs Shemtovâs grandmother). The restaurantâs inviting color schemes are beige and brown (including the brown formal table cloths), replicating the color of plump, airy, warm, and incredibly delicious complimentary pitas that are served piping hot out of the massive giant oven from which smoky aromas permeate the air. Shemtovâs creative menu is broken out into three sections: Salatim (small bites), Mezze (larger, sharable tapas), and Something Larger (entrÃ©e-size). Starting with the Salatim, while the hummus ($13) is light and creamy, consisting of Maine soldier beans tinged with tahini, garlic and evoo, itâs disappointingly bland and could benefit from additional seasoning. Also, there could simply be much more of it rendered on the plate to support the three aforementioned pitas (itâs barely enough for two). Iâm always of fan of establishments that utilize locally sourced products, and Shemtov makes fine use of nearby Ward Farmâs carrot sticks ($13). Perhaps, though, the menu item should be labeled carrot stick (singular). While I admired the char on the vegetable and the unique flavors stemming from orange blossom syrup and Moroccan spices, it appeared that one carrot was sliced into several scrawny sticks. Carrots are a relatively cheap vegetable to purchase, so why is Simcha skimping on portion size here? I experienced this very problem with the seared eggplant ($12), pan seared and whose flavors generally popped with roasted red peppers and smoked onion puree with balsamic. But if you asked me if I could delineate between a trio of Indian, Thai and Chinese varieties that the menu insists are there, then youâre a more astute diner than I (one version was decent while another was excessively bitter to the degree of burnt). Mezze fare better, including a generous portion of calamari ($16), whose fresh tentacles and rings have a nicely balanced texture between the crunchy crackle of a lightly breaded exterior and the squishy tenderness of the fishâs interior. The dish is further enhanced by a welcomed, heated spike of zhoug, a chili-pepper and garlic infused hot sauce originating in Yemenite cuisine. My personal favorite menu item is Shemtovâs innovative Middle Eastern riff on traditional French fries, this time served up as fried rutabaga ($9), doused with a delectable pomegranate molasses sauce that I was reluctant to share. Short rib poutine ($13), however, was another downer given its (sense a theme here?) inadequate portion of chickpea polenta fries topped with meat that (you guessed it) lacked seasoning that would have invigorated the otherwise creamy potato slivers that were nicely plated tic-tac-toe style. Having sampled the Yemenite fried chicken ($24) entrÃ©e, itâs easy to understand why itâs Simchaâs staple dish (although it doesnât quite reach the flavor profile pinnacle that those wonderful rutabaga fries had achieved). The bird is brined and battered in chickpea flour, unapologetically cooked in gluttonous schmaltz (chicken fat) to moisten and enhance the white and dark meatâs flavor, and dipped in a vibrant, zesty pool of red zhoug. Desserts were a mixed bag. A semi-dry chocolate lava cake was much too hastily brought tableside (our generally knowledgeable and affable server, during his lone misstep of the evening, stated that it was a leftover slice from an anniversary cake baked moments before), whereas a giant, marshmallow-infused whoopie pie drew praise across our table. Regardless, it was a bit baffling that none of these selections drew from Middle Eastern influences. A small, select list of cocktails were well executed (including a spicy jalapeno infused margarita and a refreshing bourbon blended with brown sugar lemonade with candied lemon peel), but at $13 a pop, I would expect a far more generous pour of alcohol in my concoction in lieu of over half of my glass packed with ice. An interesting offering of craft beers â both canned and on tap â span across the New England region, including a double IPA from Fall River. I am rooting for Simcha to succeed. The town of Sharon has been clamoring for an upscale eatery for years and it appears to have finally arrived. Shemtov and his energetic team are undoubtedly giving Simcha along with the local dining community their best shot. With some minor tweaks in the kitchen and a slight reduction in price points to more accurately reflect their portion sizes, this eatery will then become a simcha to behold.