We were trying to pick out just the right table/booth so all of us would have a good view of the game, without someone having to crane their neck. The larger girl that was seating us made it very obvious, rolling her eyes, and making faces, that, as far as she was concerned, we were taking too long to decide. And then Morgan, behind the bar, just did not really have too much time for us. Looked like she would rather gossip with the other hapless girl that she was training. Our drinks took too long to get made. When one of the girls in our group tried to have a discussion with Morgan about one of the drinks, she was just plain rude. When the food finally got there, the nachos were cold. Gabriel was the only hero. He was trying so hard to make us happy, and was so apologetic. We all liked him.There was not very many other people there, so being overwhelmed was not the problem.

We went in there yesterday on our way home. The food was fresh and hot. The service was good. The disappointing fact is that the restrooms were absolutely horrible. We used hand sanitizer before eating. If we would have seen the condition of the restrooms beforehand, we would have gone somewhere else. It looks like there is no sense of pride displayed at this place. As we were pulling out we took the time to observe the front door glass, it was very dirty. It just seems like the management or owner don't work there or just don't care.... We will not be back to eat there. 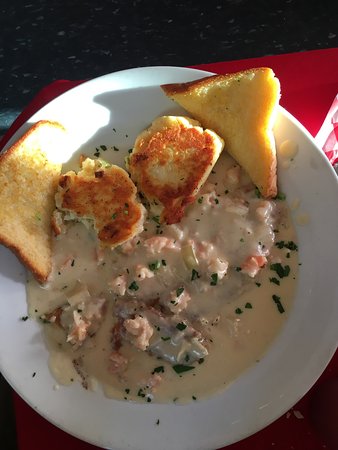 Really tough to find a good seafood restaurant at lunch in the area. We saw the reviews and were encouraged. Sadly, not impressed. The restaurant reeked of bleach upon entering. Nevertheless, we stayed. The waitress was nice and stayed on top of things. We had shrimp poboys, a grilled chicken salad and burger. The food wasnât bad, came out quickly and was hot. We were just hoping for something a lot better. 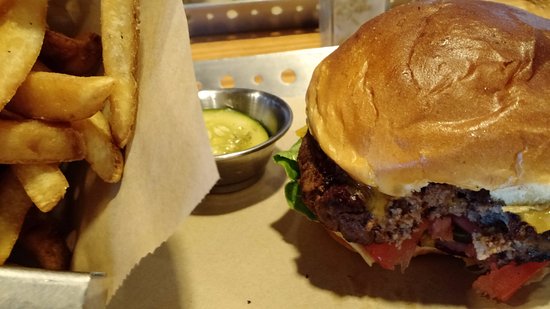 Great service and good food. Arrived late but had no problems being served and the food was fast, fresh and tasty. Waitress was great.

I had been wanting to visit this restaurant for awhile. I went with my husband on a Wednesday around 9:15am. It wasnât very busy when we arrived. There were 2 other tables. We seated ourself since there was no staff out on the floor when we walked in. We werenât sure if we were supposed to seat ourselves, but we did anyway since it wasnât busy. About a minute later, our waitress walked out and greeted us. She was nice, but she wasnât overly nice. She took our drink order right away and came back in a few minutes for our food order.I ordered the French toast breakfast with French toast, scrambled eggs, and sausage. My husband got a bigger plate that came with ham, bacon, sausage, eggs, a biscuit, and pancakes. The prices here for the food are very affordable. I will say that!Our food did take awhile to come out. Also, service is slow here in general. My glass sat empty for awhile before the waitress asked if I wanted a refill. This happened twice. Plus, the waitress was in the back a lot of the time, so there was no way to flag her down to ask for a refill or anything else.The food itself was okay. It wasnât bad, but it wasnât that great either. It was just okay. My scrambled eggs were bland, but they do use real eggs so thatâs a plus! The French toast tasted good. All in all, this is an okay restaurant. The prices are great for the amount of food you get. Service could be a bit better. Next time, I would like to come here for lunch. 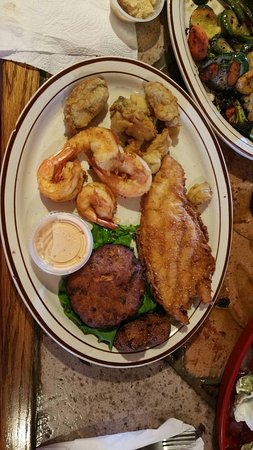 Enjoyed a break off the water, docked there, went in and had a Great Lunch! The Sweet Tea was an awesome refreshment after being out in the Sun for the morning. We opted to split a Seafood Platter which had a Large Piece of Fish, A Crab Cake, Couple Hush puppies, 4 Fried Shrimp and 4 fried oysters. Friendly Service, Food was Fresh and Delicious. Great Laid back Atmosphere.

This is a great little BBQ establishment! We stopped by for supper. We almost left because we couldnât find the entrance for the dining room! (Itâs on the side, facing the highway.)Iâm really glad we didnât.First of all, the place was scrupulously clean. The tables, the bathroom, the floor in front of the counter, were all clean as a whistle.But the most important part was the food! Letâs just talk about the âregular plateâ.This consists of two meats (brisket, pork, ham, sausage, ribs), and three sides, for $9.99! This is so much food, a starving field hand would have a hard time eating it all! The food was delicious.The brisket and pork were juicy and moist. The bacon and onion potatoes were very nice. The macaroni salad and slaw were both great. Even the green beans were kind of exciting!So, letâs check the boxes. Adequate parking, check. Clean restaurant, check. Tasty food, check. Lots of it, check. Inexpensive, check. Large variety, check.That checks all my boxes.Eat here! Youâll be glad you did. 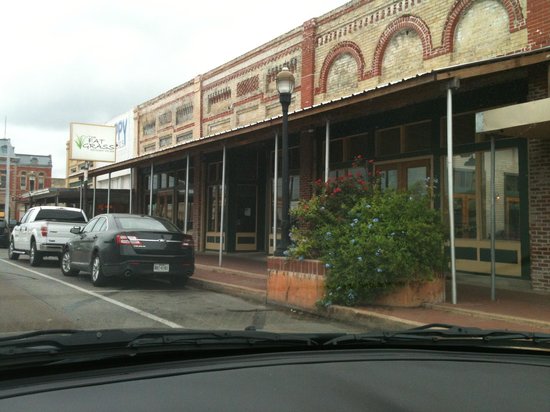 Nice atmosphere good food and prices matched. They had a private party going on when we were there but the staffing was spot on and there was no delay in service. Crew was friendly all in all great time had by all..

5 Things to Do in Bay City That You Shouldn't Miss 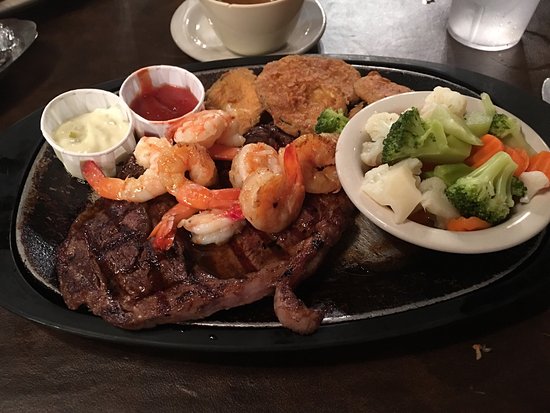 My spouse and I decided to have dinner here on a Saturday night. I enjoyed a dozen fried shrimp and a baked potato. The food was prepared well but service was lacking. Salad dishes were not cleared when entree was delivered. Wait staff did not inform there was a potato bar for toppings and bread. My spouse had salad bar with soup. Salad bar needed maintenance as several items were empty.