Top Things to do in Middlesbrough 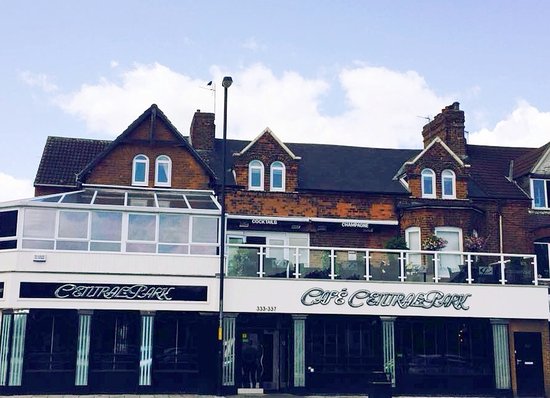 Located on Linthorpe Road in Middlesbrough, opposite the entrance to Albert Park, Central Park is arguably one of the North East’s favourite Restaurants. Central Park first opened it’s doors in December 1985 and has been providing excellent food and service ever since. We cater for every occasion; be it a quick bite to eat at lunch or a birthday celebration on an evening, we provide the highest standard in food and service. So whatever you&apos;re celebrating, Central Park is the ideal venue.

Called in for early evening meal with colleagues from work. Great selection of gins and tonics - presented very nicely. Watermelon and cucumber tonic water is probably one of the tastiest ive had. Bar staff were friendly and knowledgeable.
Unfortunately, the food let the place down. Battered garlic mushroom starter was sitting in a pool of oil from the deep fryer and the mushrooms were uncooked inside the batter.
Pasta was over cooked and mushy, although in a nice sauce.
Service was good, given that we were in quite a big group. 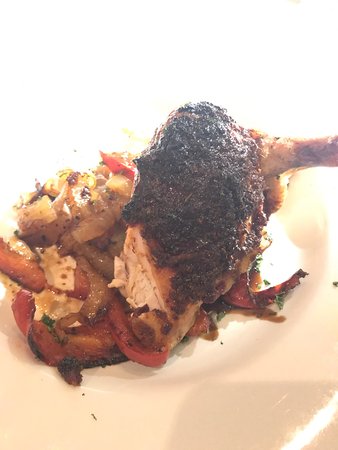 We were visiting on Business and a local recommended to come here. EXCELLENT service. One of the group was undecided as to which meal to have so was offered to have half and half. Complimentary tasty flatbread. 20% discount to NHS. My first parmo which was delicious. Super value for money and super tasty. Might come back in June!

This has been a familiar place for my wife and I for many years, as it was The Pathfinders when we first started going in...some very happy memories indeed. However, we decided we would give Sunday lunch a try, and we were very pleasantly surprised, not that we shouldn't be as we have dined on an evening many times. As always, the staff were extremely pleasant, and it was a joy to see them all dressed so smartly, not like some places where it looks like they have dragged someone off the street and they don't care. Food was of a very high standard, and we will not leave it so long next time. 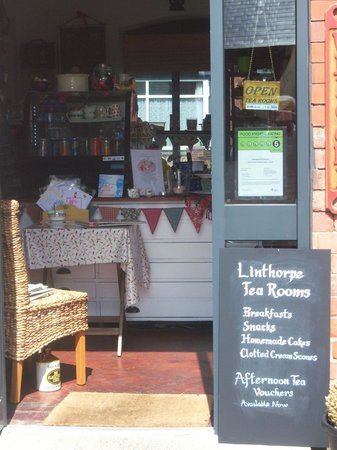 Situated within the old Cleveland Art College on Burlam Road, this 19th century building is the perfect venue for the nostalgic Linthorpe Tea Room Serving full English Breakfast all day Monday to Saturday Lunches- try our black pudding and apple or haggis and black pudding-just a treat Black pudding home made scotch eggs We have a Piano for customers to play at there leisure come along and play that tune I have some music sheets or -bring your own. Have fun the whole restaurant will sing along with you playing We have Parking in our forcourt just drive through the big black gates and turn left book an afternoon Tea and enjoy the experience Why not try one of our full English Breakfast -or a bacon bun and a Latte or a choice of our Teas

A favourite of mine in boro so glad to see it's no longer up for sale and all my favourite cakes and meals will be staying.
Had corned beef pie with chips, peas and gravy, until £5.25.
Took some lavender cake home.
They do basic stuff like corned beef pie and fish and chips but also more unusual meals like haggis scotch eggs, Thai fishcakes along with parmos, Boros firm favourite!
They do lots of nice cakes and scones and lovely coffee or pot of tea.
Don't have to book but can get busy
Staff are friendly 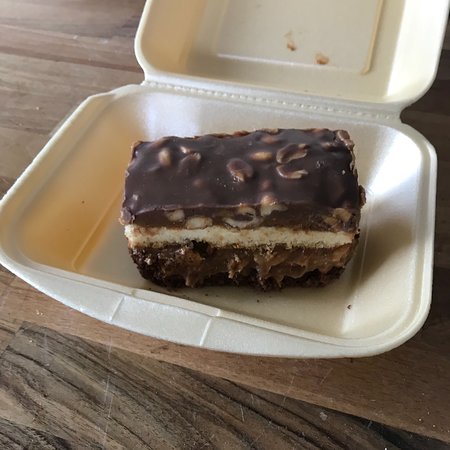 We paid £12 for afternoon tea for two through Groupon so weren’t sure what to expect. It was fantastic! The wraps and sandwiches, including one vegetarian option, were delicious as were the scones and cakes, some items having a Polish twist. We both opted for coffee, one Americano and one latte, both of which included a refill. Full price for two would have been £16 which is still excellent value. The staff went out of their way to make us welcome. We’ll be back. 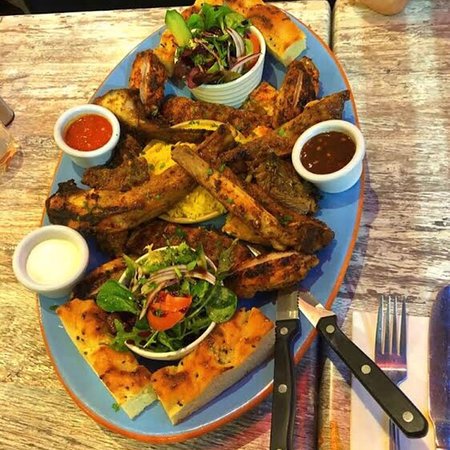 ...but definitely not our last.
Power cut forced an unexpected meal out, so we thought we'd try somewhere new.
Very friendly greeting vrom staff on entering.
Very quiet, but it was early and a Monday.
Shared two starters. Diced liver was succulent and well seasoned. Green beans simply delicious.
OH had moussaka, I had mixed kebab. Generous portions and very tasty indeed.
Service was good, attentive without being intrusive.
2 courses and two drinks each, total bill around £50 so very reasonable indeed. 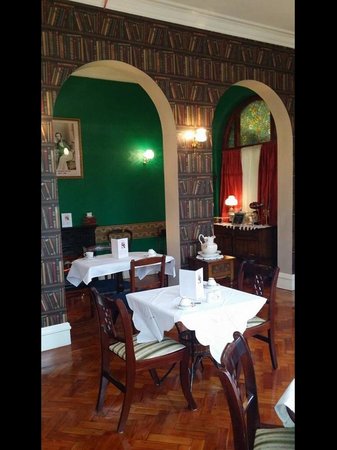 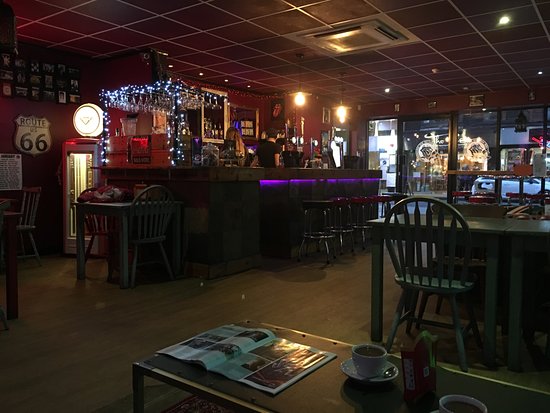 Steven James Sticky Fingers Cafe/Bar is a music bar and eatery sitting beside Steven James Guitar and Amp Centre, on Linthorpe Rd Middlesbrough. We have created an enviroment where you can come and relax during the day with a glass of wine, craft beer or coffee. Looking to have a bite to eat? We serve the best, award winning pie, mash and peas in the business,courtesy of Pieminister. Alongside this we have live music at least 3 nights a week. Not forgetting to mention our free WiFi, friendly & helpful staff and rock &apos;n&apos; roll decor. So why not you pop in to say hello...We promise you won&apos;t be disappointed :)

Been out all day and popped in for a couple of drinks with the boys on a Saturday night. The live music was excellent and the drinks were nice. Great staff, really cheerful and even the doorman had a craic whilst having a cigarette. Keep up the good work. 6 Weeks on from last visit, no difference food service atmosphere is still superb, Owners and staff this is a great place, and no faults can be found by our party. Roll on 6 Weeks time. Keep up the good work.Thank you again Pat for your great review:) We look forward to seeing you the next time x 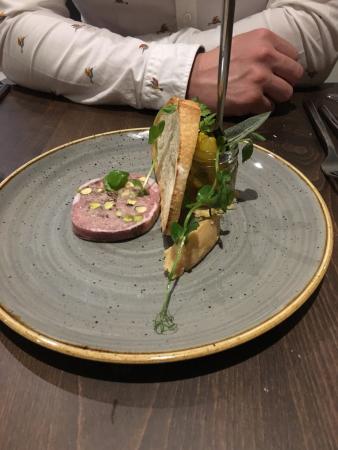 The Curing House is an independent modern British restaurant with European influences. We specialise in the ancient techniques of curing alongside modern practices to enhance flavours and textures to provide a unique dining experience in Middlesbrough. A passionate, dedicated team work tirelessly to make everything from scratch and provide outstanding service. A small intimate dining room with luxurious furnishings sets the scene for the outstanding food served; from the best charcuterie and salumi from around Europe and Britain to the lunch and dinner prepared from only fresh ingredients served from the kitchen. A meal at The Curing House leaves a lasting impression. We look forward to welcoming you soon.

I have been here numerous times with friends and I've never been disappointed. The meat platters are to die for as is the cheese. Service is excellent as is the wine. I've tried the burger, I forget which, and it was very nice. The Curing House is a must. I'll definitely be back.