Kernersville is a town in Forsyth County, in the U.S. state of North Carolina. A small portion of the town is also in Guilford County. The population was 23,123 at the 2010 census, up from 17,126 at the 2000 census. Kernersville is located at the center of the Piedmont Triad metropolitan area, between Greensboro to the east, High Point to the south, and Winston-Salem to the west. Some of the rural farmland surrounding the town has been sold and turned into large middle-to-upper-class housing developments, and numerous large shopping centers have been built in the town over the past few years. Flue-cured tobacco was the major crop grown in the area and is still grown in some areas today. While Kernersville went through a growth spurt in the first decade of the 21st century, it has leveled off and farms are doing well for the most part in an attempt to revitalize the agricultural community.
Things to do in Kernersville 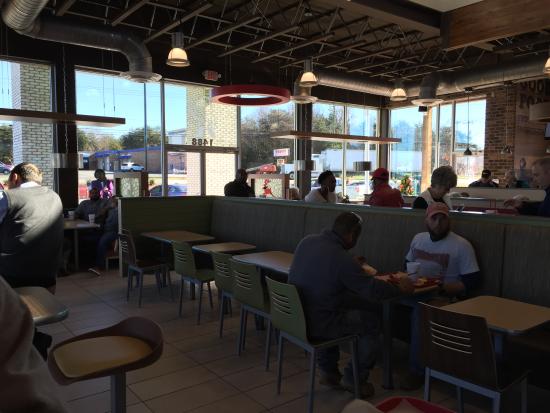 Great Burgers, great fries, great ice cream, and all you can drink soft drinks. It's very popular with children and adults. It's also often crowded. That's got to tell you it's a great value, too. 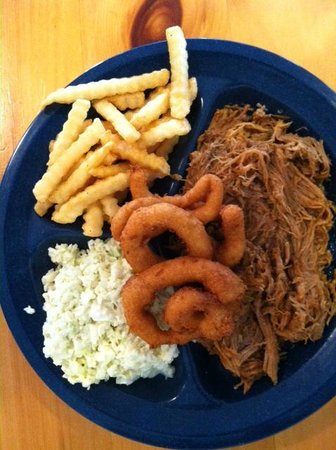 We enjoyed Prissy Polly's very much!! We had been wanting to come for a couple of years, but we finally made the trip to Kernersville today. After having visited nearly 70 barbecue restaurants in five different states, we have tasted a lot of different kinds of barbecue, and we really liked Prissy Polly's.

Our party of four had the Lexington Plate, the Dark Meat Fried Chicken Plate, the Beef Brisket Plate, and the NC Pork Barbecue Tray, with sides of Brunswick stew, BBQ slaw, brown sugar baked beans, cabbage, sweet coleslaw, and French Fries. All plates came with delicious round hush puppies. The Lexington barbecue, the Eastern NC barbecue, and the fried chicken were all very good. The beef brisket was tasty, but we have never seen beef brisket served in chunks before. It had the taste and consistency more of a beef stew than that of a cut of beef brisket. Both types of slaw were very good, the cabbage and beans were good, and our teenager loved the French fries. The Brunswick stew was good, but not the best we've had.

We also had sweet iced tea and banana pudding, both of which were very good. Our servers were very nice and allowed us to sit and visit with each other for a while after we finished our meals!

Thank you, Prissy Polly's, there is no doubt that we will definitely be returning!!! 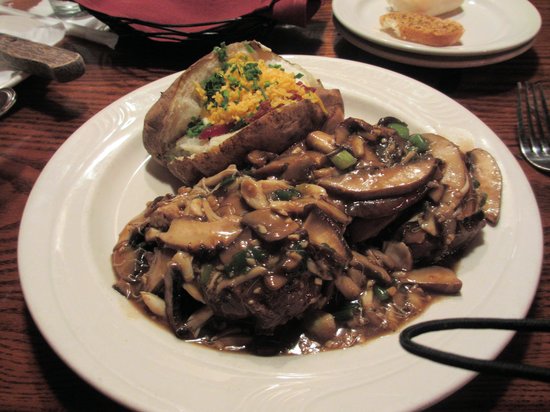 Outwest is a great place to have a delicious dinner without having to fight the Winston or Greensboro traffic. Situated in Kernersville it is easily accessible from I-40 and Bus 40/421. A well kept clean very nice restaurant with easy ample well lit parking. They offer a bar area with booths and high top tables; a beautiful outdoor dining area surrounded by brick wall enclosure to hive a nice peaceful setting away from traffic or parking lot. Outdoor area has gas heaters and fireplace in cooler months. In the warmer months there is live acoustic music on the patio. Our group usually consists of seniors, teens, young children and couples and this is one of few restaurants that seems to always please everyone. My personal favorite is the BEEF TOURNEDOS eight ounce Grilled choice cuts of filet mignon over house-made seasoned croutons, topped with jumbo lump crab meat, portabella mushrooms, scallions and rich demi-glace.
This selection is alot of food but there is never a morsel left on the plate!!! 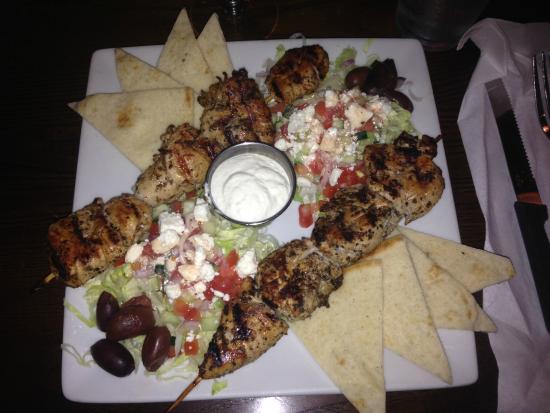 We liked the pizza and calzone alot. The salad bar had a lot of good choices. The server tried hard to keep our drinks full and remember our choices. Full house on a Tuesday at time. Some plates had to be sent back because they were dirty. That is one opportunity area. 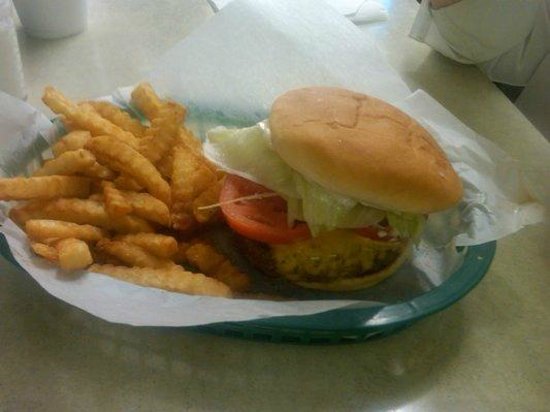 I used to eat in this tiny diner many many years ago when it was called Snows. I hadn't been back to Kville in years and was happy to see this place was still here under a new name. We stopped in for breakfast, early on a Saturday mornimg and the place was busy, it's small. We were able to sit at the counter within 5 minites, had it been 50 minutes it would have still been worth it. The food, service and atmosphere were perfect. It fit in perfectly with the charm that still remains in one of my favorite small towns in America. 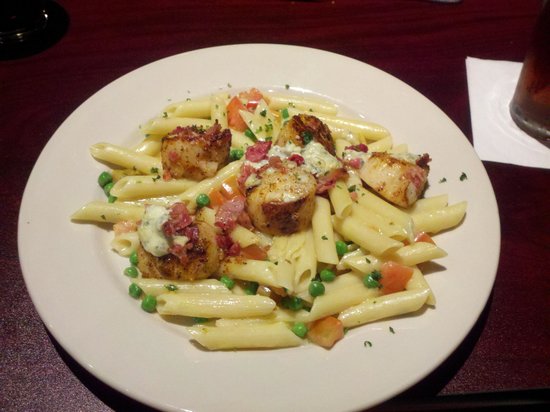 We were looking forward to this restaurant based on the "make your own pasta" feature, & were a bit disappointed that every single ingredient was at least a dollar to add. Our pasta entries were good, but not great. The house Greek I got with mine, for an up-charge, did not even have feta cheese...they use just mozzarella, which was a disappointment. I tried a bit of both a kid's pizza & the adult one my son got, & again...good enough, but nothing special. I think "average" is too low a rating, & "very good" too high, so I would put it somewhere in the middle. Service also seemed a bit slow. I would recommend it if you're in the area, but don't make a special trip from too far. This is one of our favorite places! They do a great job with the steamed seafood--the crab legs are done well every time. The fish tacos are also a favorite. Love the beers they have on tap. The staff are friendly and make an effort to get to know "regulars." The wait can be long, but we expect that and accept that it comes with the territory of a place that is good and has the quirky seating as they do at Smitty's.

Hubby wanted to go for a drive and eat at Palenque tonight. I was really not a fan of Palenque, but we went there. They have a large and somewhat complicated menu. We both ordered the Special Dinner and requested cheese enchiladas. Salsa and chips are delivered to the table and the salsa was pretty plain. The meal was delivered on two large plates for each of us. The portions were very generous. We planned to take a lot of our meal home with us. We ate the tacos and I noticed there was zero seasoning on the meat in the taco. That same unseasoned meat was placed on top of the tamale. A red sauce - basically plain tomato sauce - was poured over the tamale and enchilada. The chalupa was very bland. I did fish out a shredded whole bay leaf from the sauce poured over my food. The Spanish rice was plain, plain, plain. I took home the Chile rellano, rice, refried beans, and the tamale. Service was attentive and good and the portions were large. It is hard to believe that a restaurant does not season their food. I've noticed this on other meals here as well. I do not plan to return to Palenque . 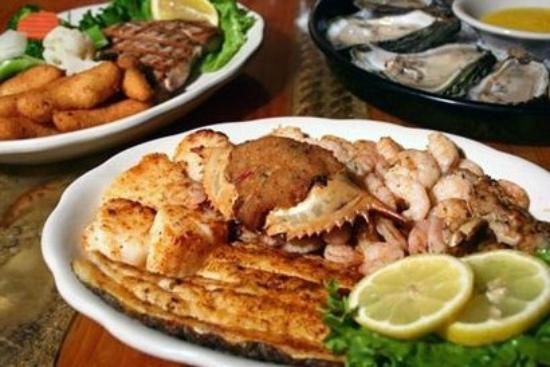 We came for an appointment at the VA in Kernersville from the mountains. Georgette was our server. She was awesome! We had fish n chips and the baby shrimp plate. Of course, I always prefer to go to seafood restaurants when they are just opening, so I know that everything is hot and fresh! Wow! This was an amazing lunch menu and so good. There were a bunch of hush puppies and it was great and very reasonable! Georgette’s customer service was what put our experience over the top!! A+++++ all the way!!! 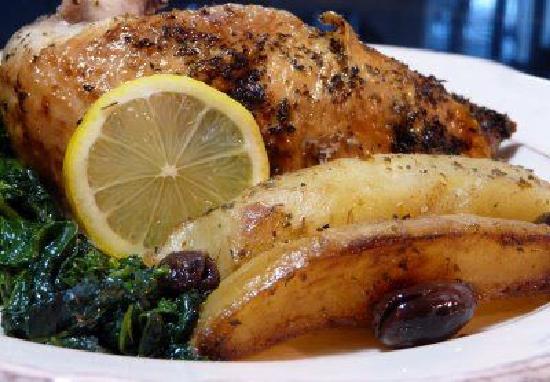 We eat here frequently when we are in the mood for breakfast for dinner, a salad or a vegetable plate. The menu is extensive, with a lot of heavier southern-style dishes. The vegetable menu varies daily... the beet salad is especially good. This is one of the few places that still serves liver...and does it well. The food is good, but eating here is like having dinner with friends. The hostess and wait staff are friendly and attentive. The portions are huge...I usually take half home. The prices are reasonable and a very good value. If you are looking for food like mom's ...this is close.