Jinju (Korean pronunciation: [tɕin.dʑu]) is a city in South Gyeongsang Province, South Korea. It was the location of the first (1592) and second (1593) Sieges of Jinju by Japanese forces during the Imjin War. The Republic of Korea Air Force Education and Training Command is located in the eastern part of the city. There are cultural-historical tourist attractions in Jinju such as Jinju Castle (ko), the Jinju National Museum, and the Nam-gang Prehistoric Site Museum.
Things to do in Jinju 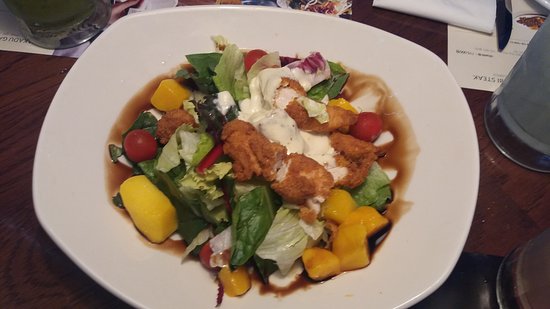 Like most western restaurants operating in Asia, the food is similar to what you expect at home, but not exactly the same. The things I noticed most were very thin cuts of meat and rice substituted for potatoes. It's difficult to get a steak that is truly medium rare. Also, they seem to put a sauce on most of the steaks. I always ordered the steak without sauce. I could keep picking at it but really it's one of the better western restaurants, and I'll eat there again if I return to Jinju. 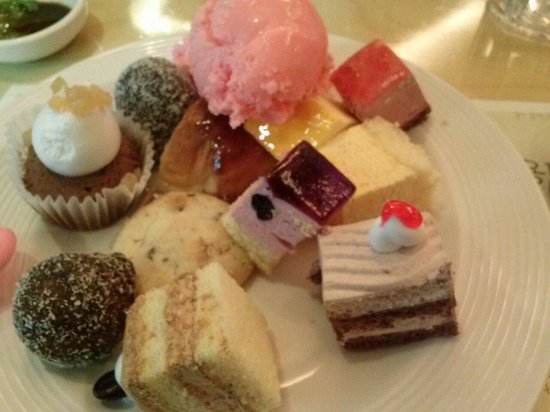 The Samsung Family Buffet has excellent selection and is a good deal for the roughly 17,000 Won that it costs. Note that it is more expensive on the weekends and holidays (I think around 22,000 Won). Kids pay 5,500 Won for 2-6 years-old and somewhere around 13,000 for 6-adult. I'm not sure on the older than 6, though.
There is a section dedicated to Japanese food with sushi and other dishes. Another section has traditional Korean food. There are also spaghettis, pizza, and many other dishes. The quantity of dishes was quite surprising. The food is a little better quality than I expect from a buffet, but certainly not anything wonderful. The best part of the experience for us was the steak. They fire up a grill about every 50 minutes and cook steak cubes right there. There is a sign in English with the times or you can just wait to see the big fire burst out in the middle of the food floor. The steak was delicious and better than a good number of steaks I have had elsewhere, plus it is right off the grill when you get it. The line builds up fast though and they only do a certain amount, so get in line as soon as they start grilling.
They have a number of drink options that come with the price, but they are scattered all over and some are a little hard to find or notice. I was done eating before I found half of them. There was also an area for mixing cocktails, I am assuming you have to pay extra for the alcohol, but all of the mixers were set out for anyone to use. I am not a drinker, so I didn't inquire into this further. They also have an entire section dedicated to desserts. I didn't eat any though, so I can't say much about them. 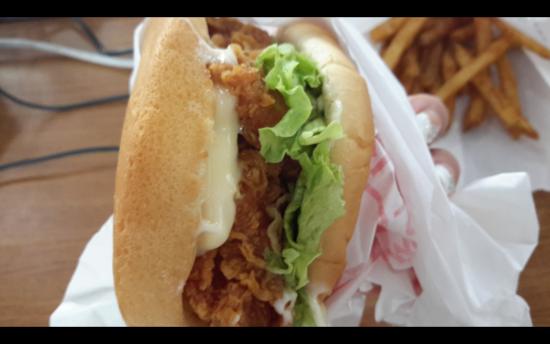 I think that Mom's Touch has better chicken sandwiches than any I have ever had in the states. Even better than KFC! 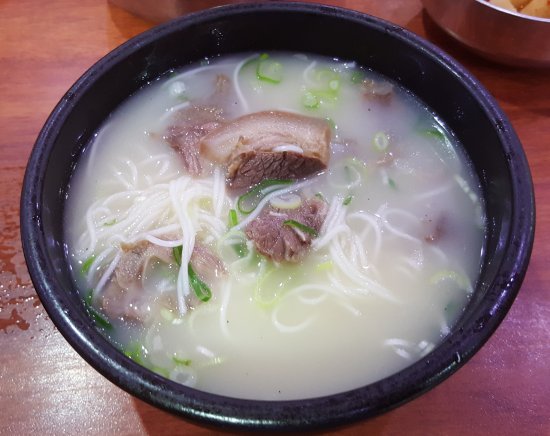 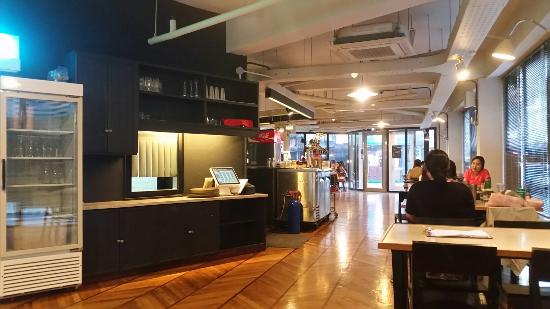 Rather strange name aside, this was a pretty good eat. I had a coworker take me here and we ordered a few dishes to share. Most of the menu is 'fusion' foods from other countries prepared in a Koreanized way. I found a good deal of American food on the menu and for the most part that is what we ate. We ordered the sloppy joe, jumbalaya, and carbonara cream spaghetti.
The servings were generous. The sloppy joe was fantastic, as was the carbonara. The jumbalaya was alright, but had too much of a spaghetti sauce taste to it. It didn't taste like jumbalaya and certainly didn't have the spicy kick it should have. And the deep-fried cream balls that came with the sloppy joe were interesting. I thought they were onion rings, but they are a custard like pudding deep-fried. For lovers of deep-fried food, may be worth a try.
The service was excellent. The atmosphere of the restaurant is rather strange, perhaps trying to get in touch with the companies name... The price wasn't terrible, but not great either. It runs about $10 a plate, depending on what you order, of course.
Overall, it was a pretty nice meal. 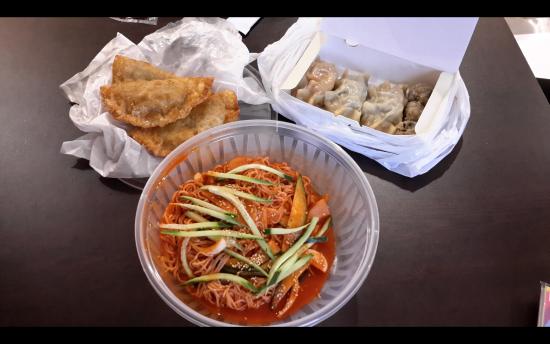 This restaurant is newly opened and serves take-out or sit down dumplings and noodles. We ordered some dumplings and the noodle, ddeokgalbi set. The dumplings were excellent. Probably the best I have had in a few years. I will be back for some more soon. The prices for dumplings do seem a little high to me, but they are good; between 3000-4500 Won.
The ddeokgalbi was also good. The noodles were rather disappointing and lacked a distinctive flavor. It was just like eating noodles in a watery dish. There was a bit of a spicy flavor to it, but nothing that really stood out about them.
They offer take-out for all parts of the menu. 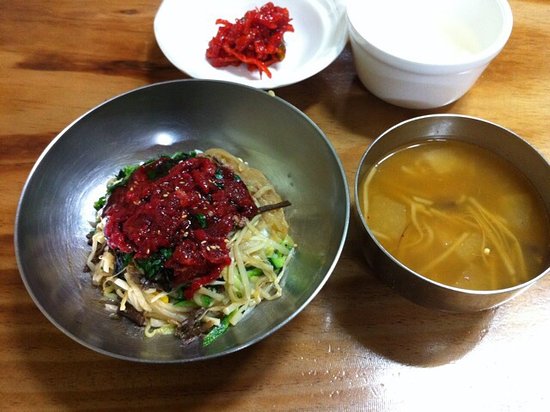 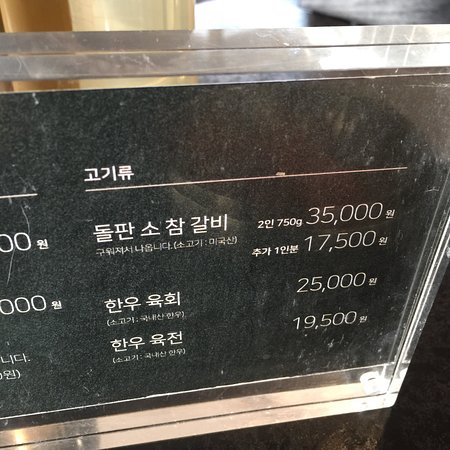 I have travelled over 50 countries and visited lots of reputed restaurants not only in overseas countries but also in Korea. But it was my first time to be requested to finish my 4 years old child of her dish fast because of what the employee said long que. But it was just 20 mins past from the dish being served for my child. Even, the employee kept standing in front of us with intention to let my child feel uncomfortable eventually finishing her food asap which was so impolite and made us very unpleasant during this trip to Jinju. We complained to the manager (seems like the owner of the restaurant), however, surprisingly, he didn't say sorry at all because he was listening in one ear and out the other. I will not recommend here. 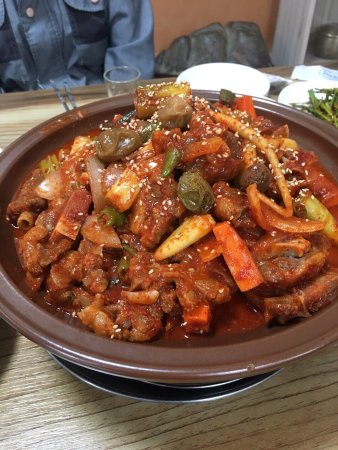