Top Things to do in Hyannis

Hyannis /ˌhaɪˈænɪs/ is the largest of the seven villages in the town of Barnstable, Massachusetts, in the United States. It is the commercial and transportation hub of Cape Cod and was designated an urban area as of the 1990 census. Because of this, many refer to Hyannis as the "Capital of the Cape". It contains a majority of the Barnstable Town offices and two important shopping districts: the historic downtown Main Street and the Route 132 Commercial District, including Cape Cod Mall and Independence Park, headquarters of Cape Cod Potato Chips. Cape Cod Hospital in Hyannis is the largest on Cape Cod.
Things to do in Hyannis 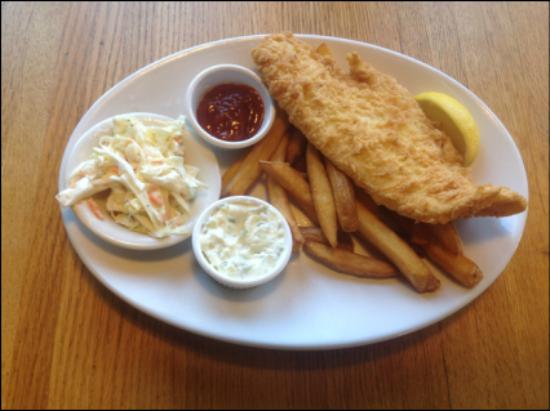 No ordinary restaurant, Sea Street Café serves breakfast all day and an assortment of lunch items that will be tough to find anywhere else. Whether you are in the mood for eggs, French omelets, sandwiches, griddled specialties (French toast, pancakes), soups, appetizers, Entrée salads, burgers or seafood entrees, this place has you covered. Stop on by for a quick bite or a relaxing meal - either way, one bite will have you hooked

The waitress was friendly and helpful....could not have had better service. I had the Lobster Cake (delicious) and the BEST clam chowder that I have had in years. I definitely recommend the restaurant and will be sure to stop in when in the area. 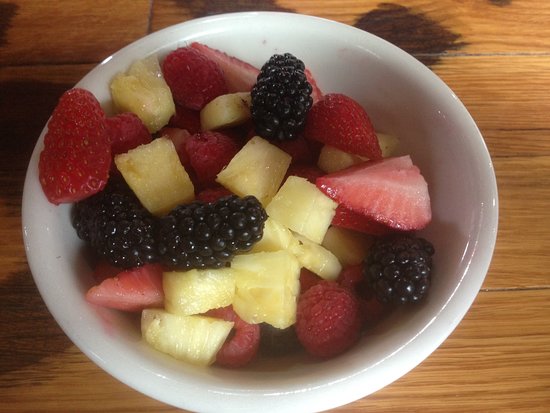 My husband and I decided to try breakfast here on the recommendation of a co-worker. From the moment we entered the establishment, the staff greeted us with friendly smiles and salutations. The atmosphere is very cozy, and has a rustic, almost "western" feel.

Our server, Neyely, was such a sweetheart and very attentive! The food was also spectacular! My husband ordered the breakfast sandwich, while I ordered the traditional Eggs Benedict...both were delicious! We also each ordered a Vermont Cheddar biscuit as a side, which was also very tasty.

Great overall experience! We definitely plan on returning here when family and friends come to visit. 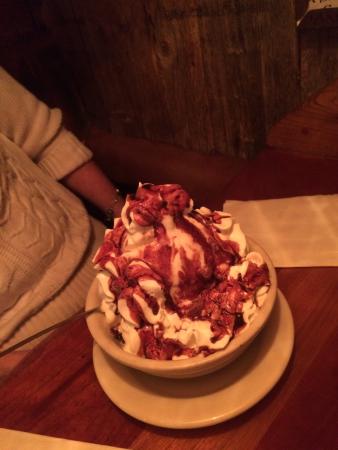 As you first enter this restaurant it is rather dark but as you look around it resembles a large tree house mixed with the pirates of the Caribbean ride in Disneyland!! However, the food is quite fresh, organic and simply delicious. 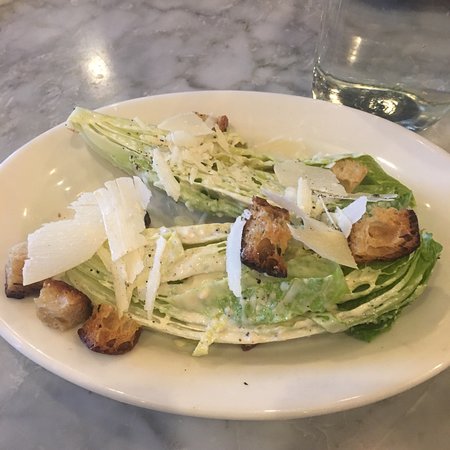 Stopped into Barbone’s after reading other reviews. We were staying in West Yarmouth for the week and looking for new places to try. This was a good choice. Came with our family of four and ordered salad, meatball app, two pizzas, wine and beer. We enjoyed everything. The meatball app was great with yummy sauce topped with delicious fresh ricotta and the best crusty bread. The pizzas are small artisan pizzas. Very delicious. Excellent sauce, fresh cheese, and soft tasty crust. The salad had only the freshest crisp veggies. Our waitress, Jayme, was friendly and attentive. We would definitely come back. Always a delight when we find delicious pizza when we are away from home. 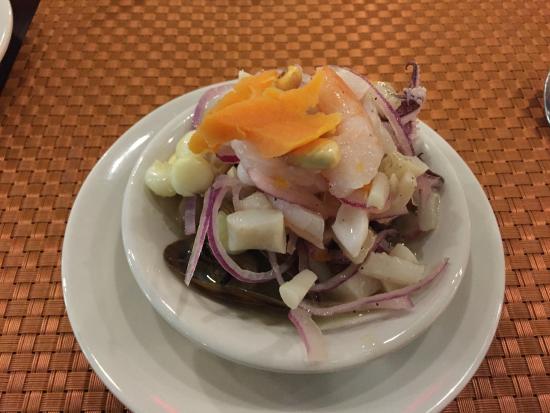 our first visit today for lunch....wow!!!!! we shared a fabulous scallop ceviche as an appetizer,it included delicious, tender calamari. for a luncheon special .....two fish tacos, hand-cut fries and a bowl of lobster bisque only $10, and the bisque was loaded with chunks of lobster meat. the veal saltimboca was delicious, came with asparagus and a great salad. our server/bartender joseph was fabulous, offering menu recommendations and suggesting a signature drink, the pisco sour. we'll definitely come back for another lunch! also included, a fresh baked crusty loaf of bread that was perfect with the flavored olive oil. 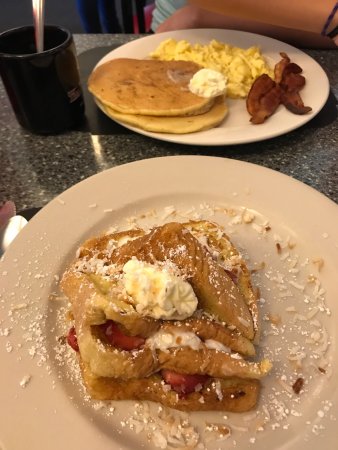 The scrambled eggs were delicious. My mom had a bacon, lettuce, tomato on one of their homemade English muffins. She said it was very good, it looked good. 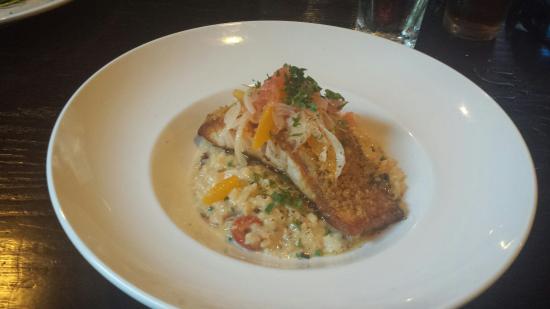 On the positive this restaurant had good food. All the members of the party were happy. Burgers, calamari, Cuban sandwiches,sliders, pizza, Mac and cheese. Decent, but not huge selection.

On the negative, Wait staff was attentive though clearly stressed by dealing with a large party. There were two tables with over 18 people. This was midday and kitchen was struggling to keep up. 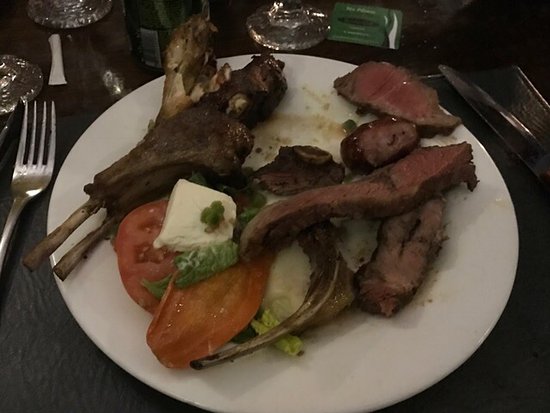 The Brazilian Grill Churrascaria offers an authentic Brazilian dining experience as we serve you Churrasco a Rodizio. Rodizio is Brazilian style Barbeque, offering a wide variety of different cuts of beef, pork, lamb and chicken that are slowly cooked over natural wood to preserve all their natural juices and flavors. We also offer a full buffet of soups, fresh salads, cheeses, hot entrees and side dishes. In addition, we have a special selection of desserts all made in our kitchen from homemade recipes. We also have a full service bar with a variety of wines, beers and Brazilian drinks such as the famous Caipirinha. The Brazilian Grill Churrascaria is proud to share the traditions, culture and food of Southern Brazil. Come hungry and enjoy your dining experience here with us!

We come here once a year during the off-season, and are never disappointed. The variety of foods offered is incredible - on and off the skewer! My favorite is always the grilled pineapple, and my husband loves the bacon-wrapped filet and the lamb. The great thing is that you can have it ALL! A word to the wise - GO HUNGRY. I didn’t bother with the dessert cart. Coffee and cheese-stuffed fresh dates from the salad bar topped the meal off very well. 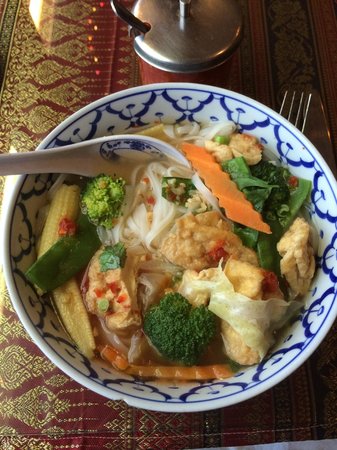 Awesome. Maybe the best Thai food I've had outside of Thailand and better than some I had there.

This place is very small -- maybe eight tables with seating for about 20 people. Service is fast and friendly.

Everyone was throughly satisfied with their meals. I don't remember what we ate.

What I can say is that if I'm ever in Hyannis again, I'm going to Bangkok Kitchen. 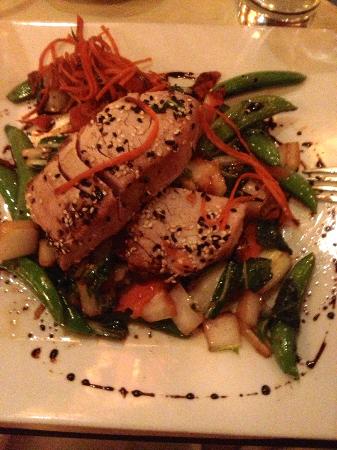 Award winning raw bar featuring oysters from the Naked Oyster sea farm in Barnstable. Bistro atmosphere by the bar with quieter dining room in back and wine room downstairs for private parties of 12 to 20. Executive chef/owner Florence Lowell, native of Bordeaux, delivers modern French taste and style utilizing fresh local products from sea and land. Carefully crafted martinis and a well-priced interesting wine list complete the "Oyster" experience. A great place to relax and enjoy food, drink, and friends or for a quiet business lunch.

Went for lunch yesterday. The duo of tuna was fabulous and as always, so was the Thai shrimp. Fish tacos had nice slightly spicey sauce. Only disappoint was the lobster bisque....pretty bland, thick, but not with lobster. Venessa, our waitress was veryfriendly