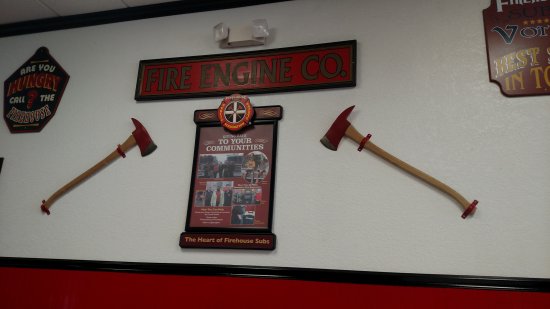 So glad we stopped by to try a firehouse sub place finally! I never thought a chain sub place would end up being my favorite sub ever but this place is just so good! I have tried at least 4 or 5 of their subs now and have loved everyone of them. It makes it really hard to order to decide whether to try a new one or get one of the other ones I really liked. The prices are reasonable too and all the workers are friendly and helpful. And my son loves going there for the kids meal because he gets a fireman hat and a small rice krispie treat for after his sandwich. Love it here!Valued Guest, thank you for the awesome feedback! We can't wait to see you on future visits, your loyalty is greatly appreciated. Desirae/Guest Services

Called in several sub orders for pick up one evening supporting our kid's school fundraiser. Standard procedure where the restaurant read my order back to me and I confirmed. Upon arrival 15-20 mins later, there was one person in front of us waiting for their food and another family seated and eating. When I was assisted at the pickup counter, multiple staff repeatedly asked me what my order was - over and over - what I wanted on each sub, what kind of bread, was it a large, etc. Had they not read the order? Bottom line: They hadn't even started making the subs yet, and I ended up waiting another 20 mins for our food which was average at best. Yeah their subs have more meat on them than most, but more doesn't always mean better. Was very dissatisfied by the service - which made excuses that they were slammed, and I was unimpressed by the food. I'll stick to Firehouse across the shopping center from them from now on. Not going back.

I'm a weekly customer, and enjoy the fresh food and friendly service. I enjoy their wonderful salad selection. What is nice is they offer1/2 size. Keep up the good work!!!