Cape Girardeau (/ˈkeɪp dʒɪˈrɑːrdoʊ/, French: Cap-Girardeau [kap ʒiʁaʁdo] ( listen); colloquially referred to as "Cape") is a city in Cape Girardeau and Scott counties in the U.S. state of Missouri. It is located approximately 115 miles (185 km) southeast of St. Louis and 175 miles (282 km) north of Memphis. As of the 2010 U.S. Census, the city's population was 37,941, making it the 16th-largest city in Missouri, and the largest city in Southeast Missouri. An emerging college town, it is the home of Southeast Missouri State University.
Things to do in Cape Girardeau This place is so great, that's why we keep returning. The hurricanes are really good. Oyster's on the half were good and tasted fresh. This time i had the cajun grilled chicken salad and wife had the burger and fries. Grilled chicken was great and the burger is one of the best you'll find. If your hungery for other cajun dish's, i'v had them and they are all very good. The service here is second to none! 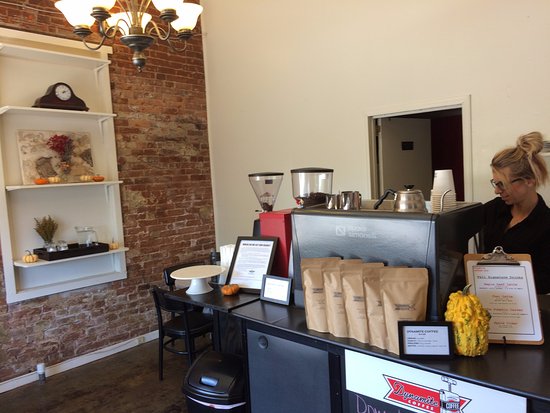 I walked in about 12:45 and they close at 1:00. They were out of coffee but said they could make more but it would take 4 minutes. I was happy to wait, taking a seat in the quaint and hip seating area. I told them I didn't like my coffee scalding hot and asked for a couple of ice cubes. 4 minutes later I had the perfect cup of Costa Rican coffee. Flavor was excellent as well as the temp. Top notch coffee house. 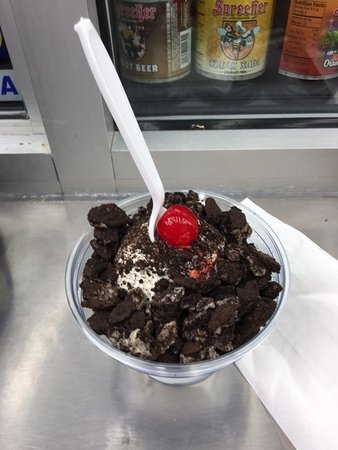 Andy's has proved to be very popular since the day it opened due to their excellent, true custard.

Their "concretes" are wonderful if (my opinion) poorly named. You can take the concrete home, put it in the freezer for an hour or more and it is still soft and lusciusly creamy. This is totally different than blizzards that do become cement like.

No "eat in" and patrons rather gather and socialize in the large parking lot. If you have dogs take them along and get sampler cones. 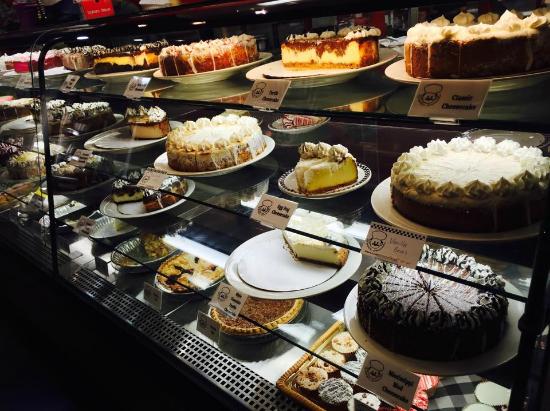 We come to the Cape every year, but we missed some good meals here. This place is nice looking & clean, decorated for Fall. There's a coffee bar, a varied menu including vegetarian, and a bountiful temptation of dessert choices. Several seating areas + a patio. My citrus salad was perfect. All of us declared the cheesecake "heavenly." 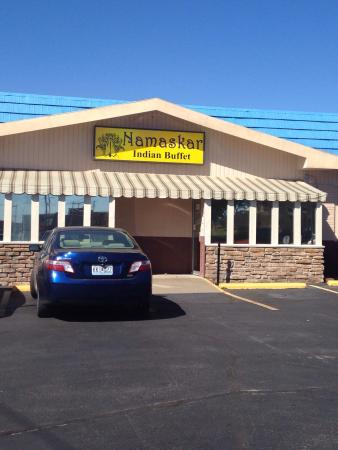 Your number one destination for authentic Indian Cuisine, and we are Halal! Namaskar brings the "Taste of India" right to Cape Girardeau! Wanting to try something new and delicious? Stop at Namaskar, where the flavors of India are being cooked fresh right now!

Though it is essentially next to the university meals are a bit pricey--expect over $12 per entree (curry and rice), plus drinks. However, it looks like they have a buffett that may appeal more to students. Also, does not appear to have a liquor license--so if you enjoy a beer with your curry this is not the place. Now the good--service was very good. Pakora appetizer was yummy. Both curries we had were very good. We also ordered a carry-out for my son and it arrived quickly and was quite substantial. Given the lack of local choices in the Cape this is a nice addition to the local food scence. 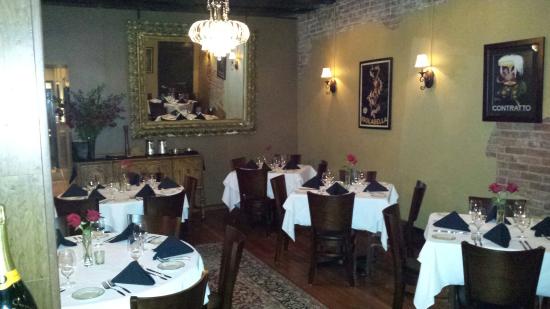 My husband an I had an outstanding meal at 36 Bar & Restaurant. We each had the Filet which was cooked to perfection and was one of the best things I ever put in my mouth!!! The friendly staff and the delicious wines were the icing on the cake. If you are in the Cape area, this place is a must!!!!!!! 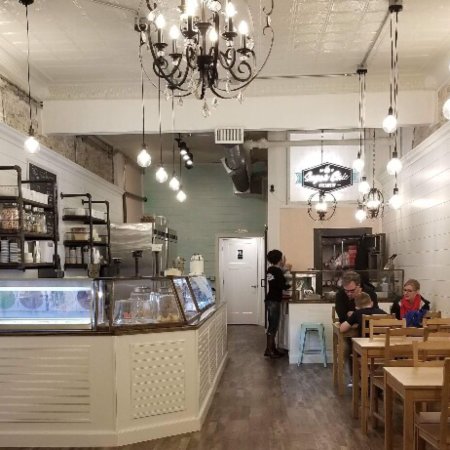 My wife and I have frequented Sugar Chic since it opened last year. The constantly rotating selection of flavors - including soy options - means coming back to try something different is easy! These aren't traditional flavors, either. Exhausted Parent and Fat Elvis are my go-to choices, while my SO loves Banana Creme Pie and Snap-o-Lantern. Suffice to say, Sugar Chic is a must-visit in Cape for those of us with a sweet tooth. 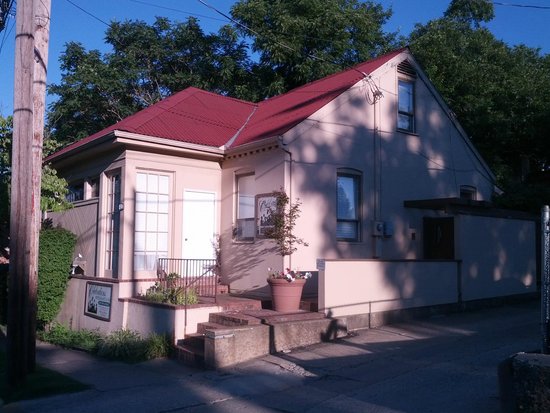 We went with three other couples. Our host and his wife are regulars and know the chef well. We are wine geeks and showed up with nine bottles ranging from Grand Cru Burgundies to Sauternes, including a 32 year old Bordeaux I brought.

The chef had no idea what we were bringing to drink but put together a six course menu on the spot just by taking a picture of our wines and creating corresponding courses.

He hit a HOME RUN with every single course. Portions were perfectly sized. Way too much food to remember it all, I just know that it was all outrageously good.

Kudos to you chef! Top 5 meal of the last few years, and we eat out A LOT.

Can't wait for my next visit to Cape! 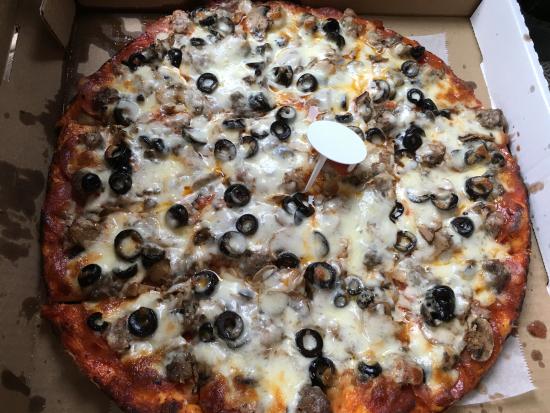 I’ve never had anything other than pizza and salad, but why would one want anything else at this restaurant. I do miss the fact that they now cut the pizza like most other pizza joints in town but it is still one of the best places to get pizza locally. The salad bar is also pretty good although the choices are a bit limited. 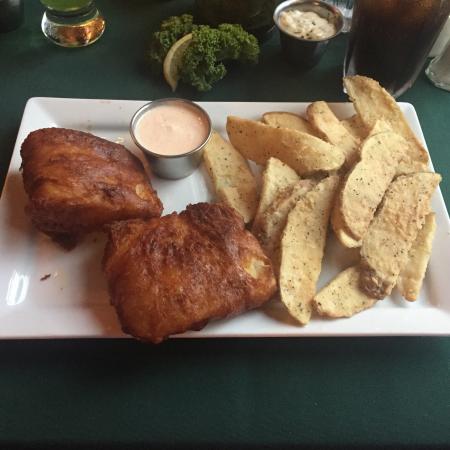 At least two eating areas, the bar and the dining. We ate in dining room. Decorated in a Irish pub theme with dark wood and details, lit enough to easily read menu.

Staff was friendly, helpful and responded in a timely manner to our presence. We arrived late on a week day night and restaurant was busy, but no delay getting seated or served.

I had a perfectly prepared steak meeting my desire for no seasonings. Medium well was juicy and tender. Others in party enjoyed well prepared and plentiful Rueben sandwiches. Friends spoke highly of sandwiches.

Restrooms were stocked and clean.

Only complaint was parking on a hillside presented minor difficult for physically challenged member of our party.

Did notice bar area outfitted with TVs for easy viewing about the bar area.