Top Things to do in Bearn

Béarn (French pronunciation: ​[be.aʁn]; Gascon: Bearn or Biarn; Basque: Bearno or Biarno; Latin: Benearnia, Bearnia) is one of the traditional provinces of France, located in the Pyrenees mountains and in the plain at their feet, in southwest France. Along with the three Basque provinces of Soule, Lower Navarre, and Labourd, the principality of Bidache, as well as small parts of Gascony, it forms in the southwest the current département of Pyrénées-Atlantiques (64). The capitals of Béarn were Beneharnum (until 841), Morlaàs (from ca. 1100), Orthez (from the second half of the 13th century), then Pau (beginning in the mid-15th century).
Things to do in Bearn 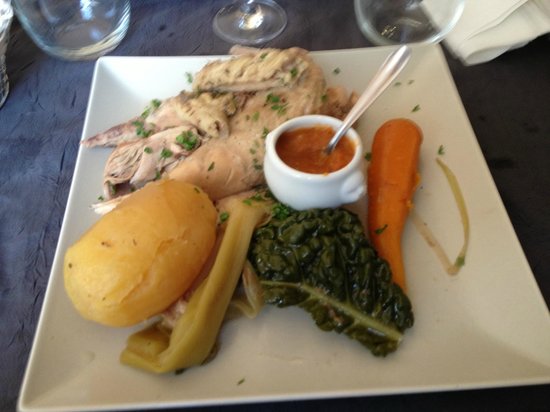 Oh, SO disappointing!
We had saved this restaurant until the last of our five night stay in Pau....expecting great things from it....'twas not to be!
I MUST say at this point that the two young men serving us were jolly, friendly and helpful...but the food element just didn't cut it for us....and we were, after all, there to enjoy the food...not the staff!
We were seated inside as there was no room left outside....the interior consists of two smallish rooms which have been tastefully and interestingly decorated....so we were comfortable!
We watched others be served with amuse bouche....but, we were not offered these!
Our starters seemed rather rushed out to us....the asparagus dish my partner ordered was VERY bland....my foie gras, on the other hand, was very tasty!
We waited quite a while for our main meal....a steak and a duck....my partner had requested his steak medium/ well cooked....it was almost raw!
Back it went!....together with my duck as that was rather bloody too....I like it pink...but, it seems, there's pink and then there's pink....
When both dishes were returned the steak was still rather pink....typical French chef me thinks...and my duck was now overcooked!
The potatoes and vegetables were nice!
We felt the chocolate soup to finish could/ should have been at least warm!
Reading other reviews we think, maybe, we were just unlucky that evening....
But when the bill is in excess of 90 euros (without service) I don't want to be unlucky! 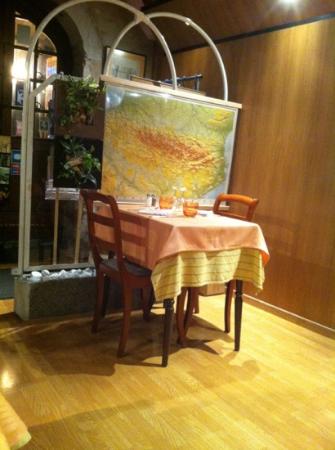 This seems to be a love it or hate it type restaurant. We loved it. The owners were very friendly and we had no problems with the speed of service, even though it was full towards the later stages of the evening. We also had the chicken in a pot and the hake with prawns as per a previous reviewer, I can only say we were a lot luckier as we enjoyed ours. The whole restaurant had a definite retro feel to it, there were some dishes on the menu that I haven't seen since the 70's and the decor fitted that era also.
In all, it was an experience we enjoyed and we probably would go back 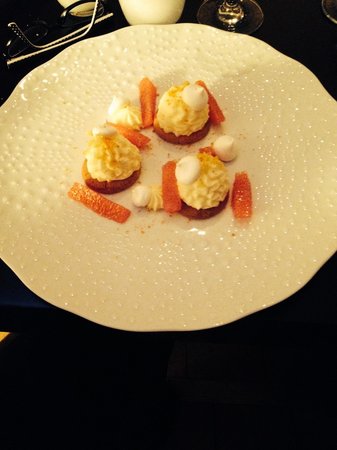 Choose this restaurant based on trip advisor rating & reviews and we weren't disappointed. Lovely chorizo bubbles & watermelon drink amuse-bouche - my 11 year old loved it. Starters were inventive and chicken with polenta main delicious. Desserts both chocolate and abricot were great. Rebooked for next week :) 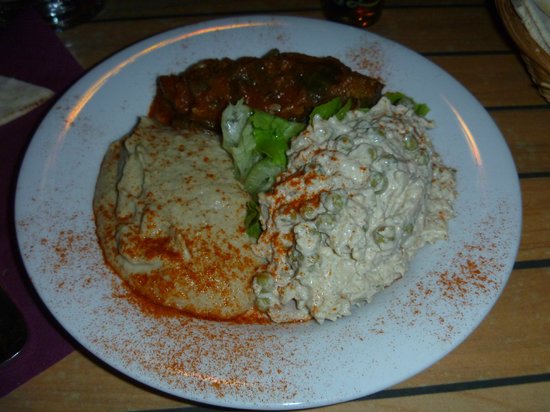 This is a must visit in Pau if you're looking for a nice night (or lunch) out! Beautiful, charming atmosphere, excellent service and delicious, fresh, well made food will make you want to come back for seconds! The dessert menu is interesting, varied and original and the same goes for the food menu.
Didier has a fun personality and he brightens up the place!! He guided us through the menu, helping us make the best choices.
Make a reservation because this is a popular place...and it's easy to see why!
Didier, merci beaucoup...vous êtes génial! À très bientôt :) 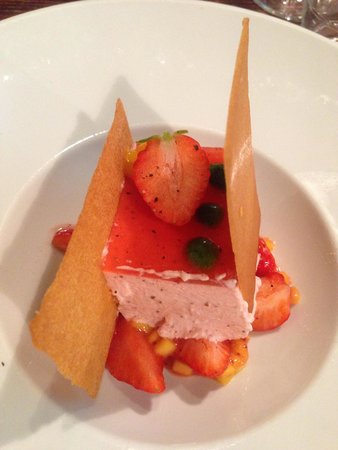 Now this is a wine bar and cellar...Open since Wednesday until saturday from 3 PM for the cellar and 6 PM for the bistrot.

A really interesting restaurant with excellent food, a big choice of wine and really friendly service. Definitely worth going to but go early or make a booking - we were there on a Monday evening and it was full by eight o'clock. 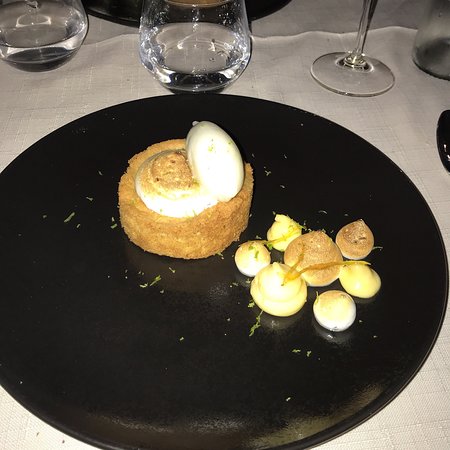 After a fairly disappointing meal in a famous Lyon bistro, what a relief to find that classy, light, tasteful french cooking is alive and well in this welcoming restaurant in Pau. Instead of an amuse bouche, they bring wonderful hunks of terrine and pickled peppers to the table, along with excellent bread. The entree of clams and vegetables was particularly fine, as was the sea bass with fennel. Charming service, fine wine, what more can you ask? 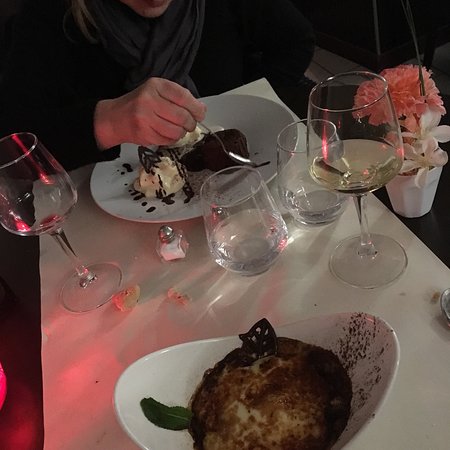 The restaurant "Le Canard Royal" (The Royal Duck) offers original, sophisticated and gourmet dishes based on French South West products. Probably the best place in Pau to discover authentic regional products and unique recipes created by our talented chef. A daily menu is suggested from monday to friday with a gourmet and varied cuisine.

A real, excellent French cuisine with many options to choose. Excellent service in an elegant and cozy environment. This was our first time at La Canard Royal after being 5 times in Pau. From now on will be in our first option every time we come to Pau for business 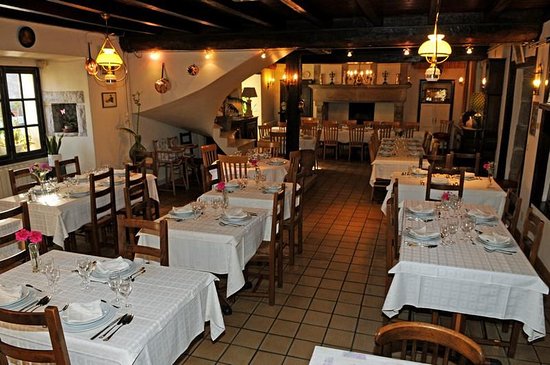 Auberge Claverie has a fine local reputation and well deserved. Our lunch with friends in a packed restaurant was quite memorable. This is a welcoming family type good French countryside establishment. The staff handled the crowd with aplomb and the kitchen certainly produced the goods. All reasonably priced Whilst not haute cuisine it was thoroughly enjoyable and is highly recommended. This is a lovely middle of nowhere location for a restaurant you feel you have worked to deserve (you have to find it first!). Service informal enough, but food definitely in the fine dining category for quality, but very reasonably priced. St Valentine 2017 was...MoreThank you very much! 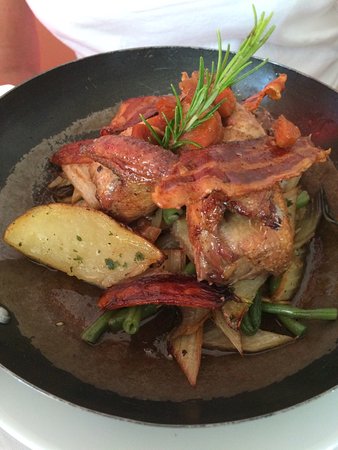 We have visited this Auberge on a number of occasions and have never been disappointed. The village is of course picture postcard perfect, Brigitte Bardot lived here.The menu changes from time to time and the food is always well prepared and interesting. the service is quick and friendly and the proprietor always in evidence. Sunday lunch is very popular and they are clearly geared up for the numbers. We have been at other times, the weekday lunch menu is terrific value and the portions sizes generous. Will continue to patronise.