Alton is a city on the Mississippi River in Madison County, Illinois, United States, about 15 miles (24 km) north of St. Louis, Missouri. The population was 27,865 at the 2010 census. It is a part of the Metro-East region of the Greater St. Louis metropolitan area. It is famous for its limestone bluffs along the river north of the city, for its role preceding and during the American Civil War, and as the hometown of jazz musician Miles Davis and Robert Wadlow, the tallest known person in history. It was the site of the last Abraham Lincoln and Stephen Douglas debate in October 1858. The former state penitentiary here was used during the war to hold up to 12,000 Confederate prisoners of war.
Things to do in Alton Heard of fast eddies through a friend thought we would try it. So glad we did. Great entertainment wonderful atmosphere! Great place to hang with friends listen to live music and just chill. Awesome place. Did try any of the food but it looked good. Thank you for a good time we will definitely be back. 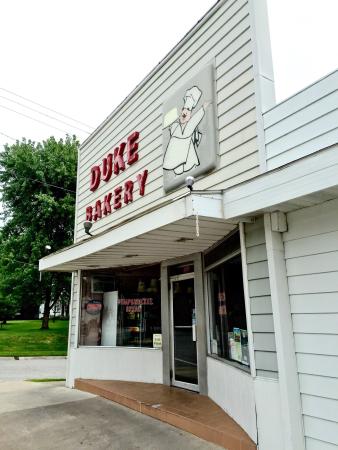 My family has been coming here since the 50s when old Mr Doucleff was still baking. A required stop after church on Sunday. They provide bread for a lot of restaurants in the area. All of their pastries and cookies are excellent. My favorite is the napoleon which isn't always available, Stop In And Have Lunch In An Antique Atmosphere. Our Building, The Ryder Building, Is A Designated Lincoln Site Located On The Lincoln Legacy Trail. Our Menu Changes Daily Based Upon What The Kitchen Is Craving At That Particular Moment So You&apos;ll Never Have The Same Thing Two Days In A Row Around Our Place. We&apos;re Located In Historic Downtown Alton, Illinois, Just A Few Blocks From The Mississippi River.

We have enjoyed the lunches here for years. When we visit Alton a trip to My Just Desserts is always on the schedule. The pies are epic, delicious, and responsible for several of my overweight pounds. Highly recommend everyone visit and indulge in the experience. 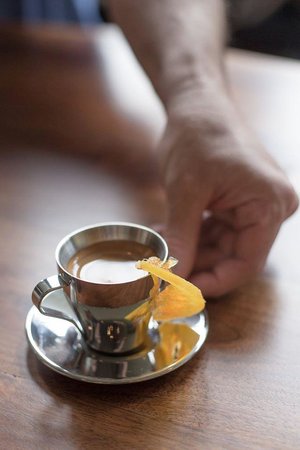 Maeva&apos;s Coffee is an age of exploration inspired coffee shop located in the river town of Alton, Il. Come join our gypsy spirit and enjoy high quality, organic coffee from Goshen Coffee accompanied by in house baked goods and quiche. Open early for commuters- open late for philosophers- with free wifi for all. For a full drink menu, visit our web site.

When we pulled into the parking lot I thought my friend was a bit nuts....it is an abandoned old school that has been renovated to house several unique businesses including this coffee shop. I had an Americano and a jalapeño and bacon quiche. Amazing quiche. Great barista. Great atmosphere! Wish I lived here to come everyday! 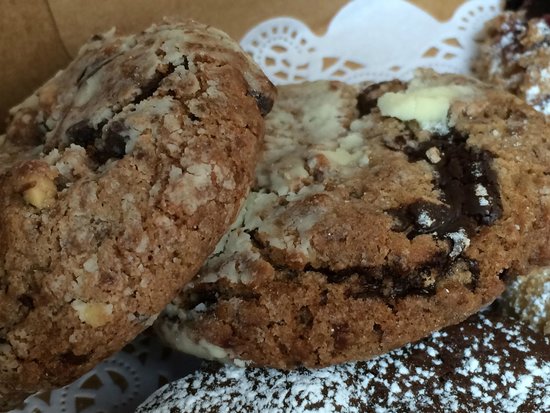 I wanted a little special treat for visiting family members and what I purchased was good. I would have liked to had a few gluten-free options as that would have eliminated the need for me to stop elsewhere. But the treats were good, but pricey. 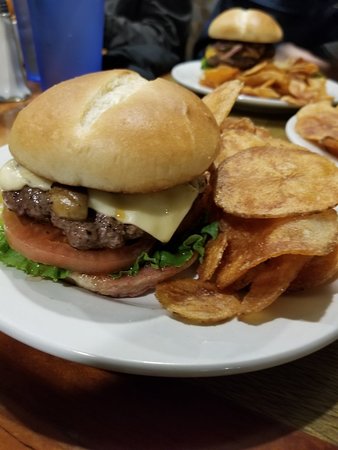 Bluff City Grill is located in Downtown Alton, IL on the heart of Broadway just minutes from the Lewis & Clark Bridge and Alton Amphitheatre. We offer a diverse menu, a relaxing lounge & sports bar featuring 14 TV&apos;s to watch all your favorite sporting events, and a dining room that is perfect for date night or a family meal. There are also Darts, Pinball & Video Gaming to meet every enthusiasts needs. In addition, there is a Banquet Hall upstairs that seats over 400 guests. With a 2 story parking garage & plenty of on street parking there is room for everyone.

We were greeted at the door, sat at a nice table and our waitress was fabulous. Very personable, and great with suggestions. We had two appetizers, buffalo dip and guac bites. The guac bites were delicious! My family also enjoyed the dip. My husband loved his spicy pasta, the portabella sandwich was ok, but the homemade chips were great. The cheesecake was delicious, however, the blonde brownie is very hard. Too hard to eat. I am sure we will be back. The menu has many choices from burgers, to Italian, and even Mexican. 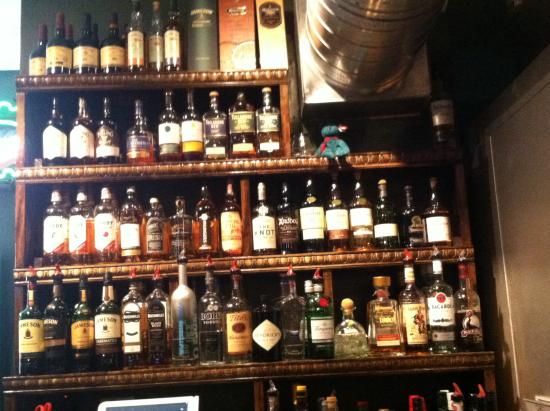 ... are the only two reasons to visit Morrison's. A coworker recommended the place, saying the food was very good. Not so's you'd notice from the lunch my wife & I had there today. The interior does look like it was picked up in Ireland & plunked down in Alton, IL, with a low ceiling and lots of wood trim and wooden block tables and tight seating spaces. But beyond the decor & the beer there's not much extraordinary about the place. By far the best part of my cheddar burger was the dark brown bread roll it was served on, and my wife's Guinness-battered cod was not very good. Maybe we could have chosen more wisely from the menu, but if you're not drinking you probably don't belong at Morrison's. 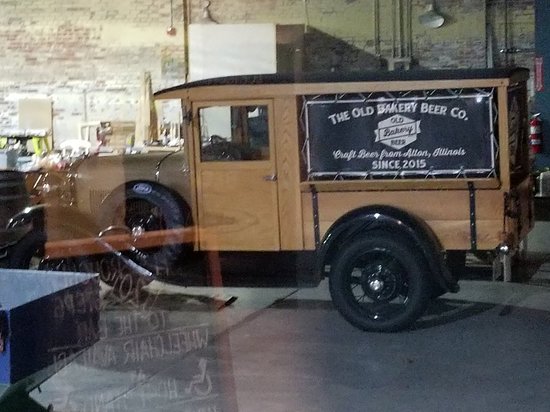 The Old Bakery Beer Company is located in the old Colonial Bakery. It is concrete and steel with retro pieces used nicely to compliment the restaurant. The server was polite, but not with many suggestions/ enthusiasm. I got the bacon jam burger with the kale pasta. The burger was good, but on the "smallish" side. The kale pasta was a little wilted and soft, probably a day or two old...not very good. The biggest disappointment was when my Moscow Mule came in a glass! I thought they all come in copper mugs. It tasted okay, but come on...presentation! Maybe better to stick with the beers. 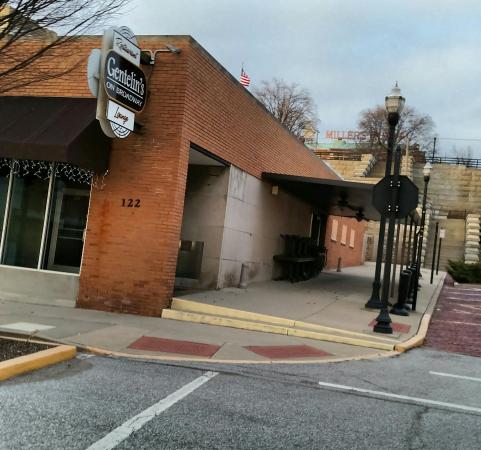 We met up with friends here for half price wine Wednesday. We also ordered dinner, not your average menu and everything was very well prepared. A little higher than average price but appropriate for quality, variety and taste. Can't beat half price wine on Wednesdays and martinis on Thursdays. Also if they ask you for address give it because they will send a thank you note for your first visit and a 15% off coupon to come back in. Owners are locals that take pride in their business. Finally, an important feature to me, they have outdoor seating and if you sit on front walk you have a view of the river 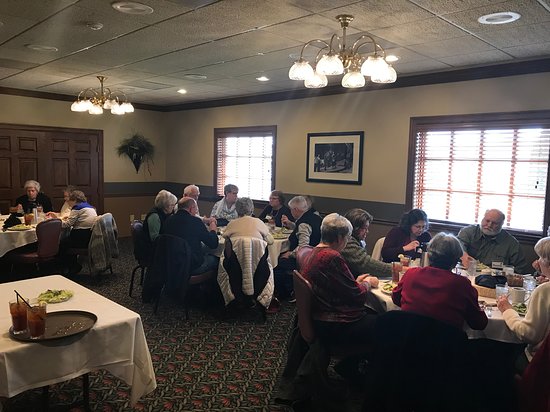 Reviewed By Alan A

We came here for lunch before my granddaughters birthday party. She had the kids meal with 2 legs, fries and a milk to drink. I had the 2 piece chicken, fries, toss salad and water. My wife had grilled chicken breast, cauliflower, salad and water. They bring out bread and crackers. It was all good and relatively inexpensive. Our meal was $25.