I just saw Barrington Stage's presentation of the Creative Place international's production of Jefferey Sweet's excellent and timely play, Kunstler. Ingratiatingly acted by Jeff McCarthy who is ably supported by Erin Roche, the play has been lovingly directed by Meagan Fay who allows McCarthy to delve into the soul of the great man. The set, lighting and sound designers (James Fenton, Betsy Adams, and Will Severin) do splendid work in keeping us riveted to the play, which moves swiftly through its 90-some minutes. A smart and important production. 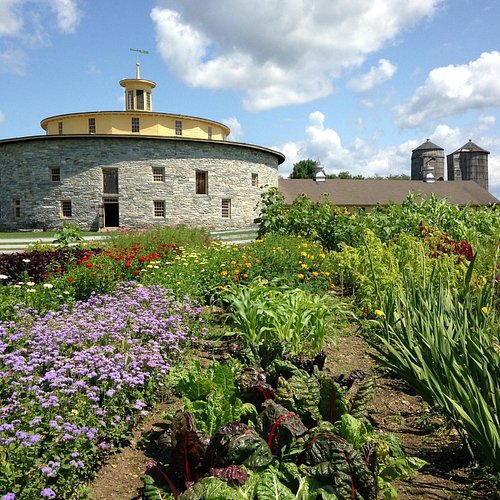 Hancock Shaker Village is a living history museum committed to bringing the Shaker story to life and preserving it for future generations. Called the "City of Peace" by the Shakers who lived here for 179 years until 1960, this community was the third of 19 major Shaker Villages located in New York, New England, Kentucky, Ohio and Indiana. There are 20 historic buildings on this site. The values that the Shakers embraced -- equality, pacifism, community, sustainability, responsible land stewardship, innovation, simplicity and quality in work -- still resonate here. The working farm is the oldest in the Berkshires. Visit the gardens and animals, meet the interpreters, see demonstrations, hike the trails, immerse yourself in unique art exhibitions, and explore. A farm-to-table cafe is on site.

This collection of 17 buildings, including a unique round barn and spread over hundreds of acres, provides a glimpse of what life was like on a Shaker farm about 70 years ago. Now just a tourist attraction, the property once housed up to 300 Shakers at its peak. A few costumed characters cordially interact with visitors and are child-friendly. I especially enjoyed the demonstration of Shaker singing and sacred dancing, which allowed audience participation. The buildings give an appreciation of the craftsmanship and ingenuity of this religious sect, which is all but extinct. (A few still live communally in Maine,) For enthusiastic students of Shaker culture, this is a must-stop, along with the nearby Mount Lebanon colony across the NY line, about 5 miles away, and the Shaker South Family settlement near the Albany NY airport, about 30 miles to the northwest.. Beware, the village is about the size of two football fields and many of the buildings have staircases, so handicapped people may be able to see only some of the features. Children will especially enjoy the cattle, sheep, chickens and other farm animals, available for petting. Wonderful place for an easy hike. They have a variety of habitats that attract many different species of birds. Quite flat trails, all well marked. Best spot for birding is what they call the crossover trail that goes over marshy terrain with an abundance of brush. Spotted 8 different birds just on that 100 meter trail alone. Highlight of my hike was a fantastic pic of a Goldfinch. I will be returning.

Open on Saturdays only from October 19 through December 14, 10am - 2pm. Visit the home where Herman Melville and his family lived from 1850-1863. Melville wrote "Moby-Dick" here as well as many other notable novels and short stories. Main season is from May-October with daily tours, programs, hiking trails and museum shop.

Visited in August 2018 and loved it. (I indicated August 2019 because the system requires a date and the selection is limited!). This is a house in which Melville lived in the mid-1800s. You can go into his office and even see the view of a nearby mountain that is said to have inspired Moby Dick, Mount Greylock.

When you want something beyond ordinary . . . An eclectic mix of some things you need, some things you don't need but just want and many things to make your home and life more pleasant. Doing dual duty as an outlet store for Museum Facsimiles, Pittsfield USA manufacturer supplying boutique stores, and an outlet for the cool things we find.

There are so many trails, so many beautiful views, lovely ponds, and nice trails for 4 wheeling--there are camping sites

I have a pontoon on this lake as well, best lake in the Berkshires. Great views not to crowded with boats. Bald eagle nest always there - saw the two kids fly last week. Mountain View’s (Greylock included) and a great sand bar to hang out on. Public beach and restrooms available also playground for the kids. This lake is great for paddle boarding and kayaking too. Worth the visit !!!

Established by Zenas Crane in 1903, Berkshire Museum integrates art, history, and natural science in a wide range of programs and exhibitions that inspire educational connections between the disciplines. In association with the Smithsonian since 2013, Berkshire Museum is part of a select group of museums, cultural, educational, and arts organizations that share the Smithsonian's resources with the nation. Located in downtown Pittsfield, Massachusetts, at 39 South St., the Berkshire Museum is open from 10 a.m. to 5 p.m. Monday through Saturday, and noon to 5 p.m. on Sunday. Admission is $13 adult, $6 child; Museum members and children age 3 and under enjoy free admission.